Causes of high unemployment in Zimbabwe

The unemployment rate is the proportion of the economically active population that is unemployed and actively looking for employment. In 1990, Zimbabwe embarked on a programme of Economic Reforms popularly known as Economic Structural Adjustment Programme (ESAP) and 1991-1992 saw one of the worst droughts. With close to 70% of the population living in the rural areas (CSO 1992) and dependent on agriculture for their livelihood, this constituted a major disaster. One result of these events was increased migration to the urban areas by people in search of employment.

Don't use plagiarized sources.
Get Your Custom Essay on Causes of high unemployment in Zimbabwe Just from $13,9/Page

Worsening economic conditions plus ever increasing corruption and crime have been the norm since 1995. Unemployment is currently soaring and the current rate stands at 70%. This has been from retrenchments, business closures e.t.c. According to EMCOZ survey, about 6000 jobs in the different sectors of the economy were lost by the end of 2001. The figure for 2002 was much higher as a result of the worsening business environment as the government fails to create opportunities to stimulate industrial expansion.

Unemployment is Zimbabwe has been caused by quite a number of factors. Most of these are mainly because of political reasons. The following are some of the factors that are causing unemployment:

The investment/business climate is unfriendly

The growth path – reliance on primary products – is suboptimal

Geography (proximity to South Africa, no direct access to the sea)

These are now explained below:

The investment and growth of the Zimbabwe Economy has been shrinking of late. This has had a significant impact on the Zimbabwean companies. In the past 3 years, over 500 companies closed operations because of prohibitive operational conditions characterized by high input costs, hard currency shortages, high levels of interest rates, inflationary levels as well as the uncompetitive export market. Both the company and the government has been failing to effectively invest and thereby slowing growth. As a result, this has resulted in massive unemployment.

Usually governments and exporters worry most about the foreign elasticity of demand for the exports. But in Zimbabwe today the most important is undoubtedly the domestic elasticity of supply of exports. This is reflected in the export volume numbers. In 2003, tobacco prices are still virtually unchanged from last year and higher than in previous years, but volumes are down by two-thirds. This then means that if we have very few goods that we are exporting, no we end up having a weak generation of foreign currency which we direly need for all our imports. This has significantly impacted on most organizations who eventually resort to the black market for the foreign currency.

The role of monetary policy is crucial because macroeconomic policy affects the REAL economy, largely through the credit and capital markets. At the start of the 21st century monetary policy is the most powerful weapon that governments have at their disposal. Monetary policy influences interest rates (directly) and exchange rates (indirectly). It also influences investment, and thereby economic growth and employment. It has major implications for the financial markets – bonds and equities

And today, its most important role is that of ensuring price stability. All this seem to have been ignored in the Zimbabwean scenario, where the macroeconomic policies are arm twisted just for the sake of political expediency. As a result, many sectors have been affected, and no jobs were created and thus an increase in unemployment.

The investment/business climate is unfriendly

The more profitable and attractive the business investment climate, the more firms will want to raise new money to expand and the more they will issue bonds. During a business boom or upswing the supply of bonds rises. The investment climate in Zimbabwe is not sufficiently favorable to attract the type of Foreign Direct Investment needed to transform exports. There are so many regulations concerning capital repatriation and profit/dividend remittability. This discourages investment and hence at the same time increasing unemployment.

The population in Zimbabwe has been increasing at a decreasing rate, but the fact that the population is increasing without a complimentary increase in job opportunities, this therefore means all the job candidates are jobless.

The growth path – reliance on primary products – is suboptimal

Zimbabwe has been relying mostly on the products which are just primary. Such dependence has had no joy being found for the thousands of youths in Zimbabwe who are looking for jobs.

Geography (proximity to South Africa, no direct access to the sea)

Zimbabwe is a landlocked country and has been relying mostly on its neighbours namely South Africa and Mozambique. This has placed the country in a state of disadvantage hence the employment creation rate going down.

A number of tertiary colleges have sprung up in Zimbabwe, and yet the existing infrastructure is unable to absorb the swelling numbers of youths seeking training opportunities. There is also a high mismatch of skills acquired from training on one hand and the labour market opportunities on the other has led to increased job seekers.

Seriousness of the problem:

The issue of unemployment in Zimbabwe has reached such alarming levels which have brought discontent among the citizens of the country. This has been evidenced by the massive increases in the crime rates and other issues which include prostitution. This whole lot is as a result of a number of job seekers who are on the market failing to secure anything.

Effects of Land Resettlement and HIV-AIDS on unemployment

HIV and AIDS has been much talked about and discussed in Zimbabwe. This deadly incurable disease and virus has brought about much untold suffering and orphans. This also means that the number of job seekers flowing into the market will fall sharply. This might be a blessing in disguise in that it will provide a partial solution, but it will also highly likely slow the growth rate of the economy and thereby the rate of job generation.

The issue about the effect of HIV-AIDS is two fold as it erodes both the employed and the unemployed. In the long run, there might end up there being very few numbers seeking for employment. The high levels of people who are joining the job market make this a good pessimism.

The massive land reform initiated by so-called war vets and the government produces more losers than winners. More than half a million farm workers have already lost their jobs and source of income, without gaining any of the redistributed land. Those displaced from the farms have found themselves on the job market. This then means that instead of solving a problem, the government has created more problems for itself. The problem with that is that this produces a chain of other problems interrelated to the farming business.

On another note, if the land resettlement programme was well managed, this could bring a partial solution to the problem. This could temporarily create self-sustaining jobs for the rural community. The only problem is that the government in principle banned all commercial agriculture and villagised the whole country into small villages. This can never be a lasting solution to the unemployment problems as agriculture’s share of total employment falls as economies develop. Thus in the long run, this ceases to be a solution.

Those in the informal sector remain an economic burden for the country because their incomes cannot meet basic needs and that most, if not all, operators subsist below the poverty datum line.

It is a pre-requisite for employment creation in Zimbabwe to be enhanced by mobilisation of resources in capital markets through an unprecedented improvement of savings as a percentage of the Gross Domestic Product (GDP) to around 25 percent so that funds would be invested and hence forth job creation. But to achieve this, the country should offer competitive investment incentives such as consistently low inflation and interest rates, stable foreign exchange rates, minimum state controls, low taxation and a politically stable environment. Improvement of conditions of services in the sector could be sustainable because of low wages, and there is need to realise that the economy could be stimulated through the rural sector, small scale and medium enterprises or large corporations.

All the stake holders, citizens and the government must all be actively involved the reduction of unemployment. Without this combined effort and commitment, unemployment is likely to continue rising since the economic conditions are worsening and it is becoming more difficult for the companies that had survived before to continue surviving. If things are left unattended to as they at the moment, unemployment will grow to be a self created time-bomb for the government and will eventually build enough pressure in it to force it to explode.

Causes of high unemployment in Zimbabwe. (2016, Jul 13). Retrieved from https://studymoose.com/causes-of-high-unemployment-in-zimbabwe-essay 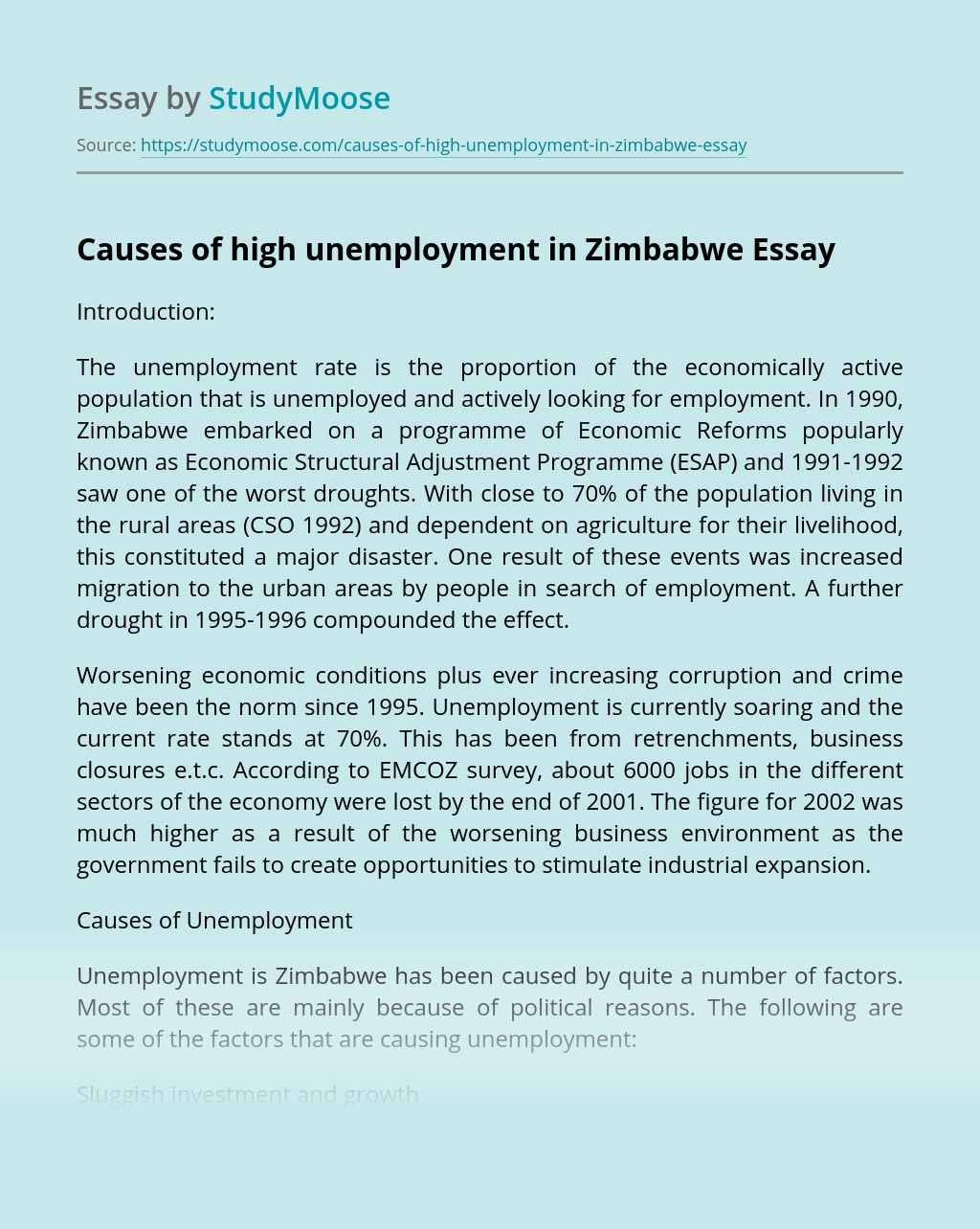 Rate this post What are your professional goals? How will an MBA/GDM/GCCM from AGSM MBA Programs help you? I intend to pursue a career with an insurance management firm focusing on the healthcare industry after acquiring my post-graduate degree. As I coordinate account management projects across functional groups, I will increase and gain exposure on...

Rate this post Questions related to analysis of a company’s position to achieve its long term goal have always been one of the most discussed topics in management. Different scholars have tried to answer the problem in different ways. Some focus on external factors, others on external factors, while others combine both. One of the...

Rate this post The part of the economy interested in offering basic federal government services. The structure of the general public sector varies by nation, but in many nations the public sector includes such services as the cops, military, public roads, public transit, main education and health care for the poor. The public sector may...

Review the article What is strategy? by Michael .E. Porter

Rate this post Michael Eugene Porter is a Professor at The Institute for Strategy and Competitiveness, based at the Harvard Business School. He is generally recognized as the father of the modern strategy field. One of his great writing is “What is strategy?” published in 1996. The beginning of the article raises a mistake of...

Rate this post The trade networks between Africa and Eurasia from circa 300 CE to 1450 CE experienced many changes in their merchandise trade and who they traded with. Also, there were continuities involving their methods of trade. Among these changes and continuities technological advancements were made and cultural and political aspects were also affected....