Causes of Unemployment in Australia

There are a number of causes of unemployment, which ultimately result in both positive and negative consequences for Australias economy. These causes are outlined as follows.

Economic growth is possibly the most influential factor causing unemployment. The demand for labour is a derived demand, meaning that it is determined by the level of demand for goods and services in an economy.

Turn in your highest-quality paper
Get a qualified writer to help you with
“ Major causes of unemployment ”
Get high-quality paper
NEW! AI matching with writer

This means that if an economy is experiencing low levels of economic growth, aggregate demand will fall, thus decreasing the demand for labour, which will result in an increase in unemployment.

Unemployment may also be caused by technological change.This can have a negative effect on unemployment as a company may replace labour with capital in order to become more efficient.

Jobs are lost as technology is now used instead, or people dont have the skills required for the new production methods therefore increasing unemployment. However, the labour force may undergo further education and training to acquire the new skills needed, thus reducing unemployment.

One of the reasons for a rapid increase in labour costs may be the inflexibility of the labour market due to regulations for e.g. 2006 IR laws resulting in higher minimum wages than would occur if wages were set through the interaction between the demand and supply of labour.

In addition, the process of structural change in the economy often involves significant short term costs, unemployment. Job losses are greater in less efficient industries and in areas undergoing major reforms, such as public utilities that are being privatised. For e.g. large tariff cuts have contributed to the loss of jobs in the manufacturing sector. Structural change also includes reductions in protection. If local producers can no longer compete internationally there will be a rise in unemployment, however this will be beneficial to the labour market in the long term as efficient industries emerge.

Another reason for declining unemployment is changing participation rates and school retention rates. During an economic upswing the participation rate (labour force / working age population x 100) is known to rise as discouraged job seekers re-enter the labour force and begin to actively look for work again. This means economic growth needs to be high enough to absorb both the unemployed and those returning to the labour force for unemployment to decline.

As more students are completing high school and entering tertiary education, young people are entering the work force later. This means that the size of the labour force is reduced, which improves the rate of unemployment. Furthermore, once students finish their studies and enter the labour force they have greater knowledge and skills, improving their employment prospects.

Unemplyment Effects on Society and Economy

A consistently high level of unemployment has negative social effects on society, individuals and the economy.

Unemployment within an economy has dire consequences on society. Increased inequality is the most severe cost within society. Unemployment tends to affect lower income earners such as the young, unskilled, indigenous Australians, regional Australia and those migrants who were born overseas. Because unemployment means a loss of income for these social class they become relatively worse off compared to higher income earners as they struggle to cater for their day to day needs, therefore contributing to poverty and overall inequality in income distribution.

Unemployment is associated with many of the most serious and personal social problems in Australia. Among families and individuals, especially those who suffer from long-term unemployment, there is an increased incidence of social problems; including homelessness/housing problemssever financial hardshipfamily tensionserosion of confidence and self esteemincreased levels of debtloss of work skills making it all the more difficult to re-enter the workforceincreased social isolationpoor health, psychological disorders and suicideThese social problems have an economic cost for the community as a whole, since more resources must be directed towards dealing with them. Money to be spent on resurrecting peoples lives takes away funds from satisfying community wants.

All in all, unemployment is one economic issue which has to be looked at very closely, as the consequences listed above are just some of the realities brought about by unemployment.

Even though Australia has low unemployment rate in comparison to other OECD countries, unemployment has been a significant economic policy challenge in Australia for the past three decades.

During the 1990s the unemployment rate peaked at 10.7%, the highest level since the great depression due to the severe recession in Australia and the global economy. Falling AD resulted in the closure of many firms and cutbacks in production, which led to cutbacks in labour therefore increasing unemployment. Australias slow progress on unemployment during this period was also due to the strength of labour productivity growth which meant businesses were able to increase their output without hiring new staff.

Through the extensive structural change and micro economic reform unemployment during this period worsened. As new technologies emerged and production techniques changed people who lost their job found it more difficult to obtain new jobs in emerging industries.

Since the 1990s recession, Australias unemployment levels have been falling gradually due to its consistent economic growth levels over the past 15 years bringing unemployment to its minimum level of approximately 4.8%.

Australia needs economic growth rates of at least 3.75% in order to make progress in reducing unemployment. This only occurs as unemployment can only be reduced if AD (economic growth) exceeds the total of productivity growth plus growth in the labour force. This relationship is mainly referred to as Okuns Law.

The labour markets ability to sustain low unemployment is a result of improved Macroeconomic Policy frameworks and extensive Microeconomic Reform over a long period of time.

Macroeconomic Policy allows the government to alter aggregate demand in the economy through the use of Monetary and Fiscal Policy. As 8 out of the last 9 budgets have achieved a Fiscal Balance, our 2004-05 Budget has a relatively small surplus with payments being sent, totalling to 1% of GDP, at the end of the financial year and the cash rate has been below 5.5% for 39 months the Howard government have held Macroeconomic Policy in expansionary ground for a substantial period of time. This has resulted in 13 years of strong sustainable economic growth and, thus, elimination of cyclical unemployment.

Monetary Policy assists by smoothing out the business cycle and reducing fluctuations in aggregate demand. The RBA has chosen to maintain low interest rates because of the effects higher interest rates would have on unemployment, among other factors. Over the past three years Australia experienced a Real Estate boom. This has resulted in a major growth in debt and construction in Australia. An increase in interest rates for many of the heavily indebted would dramatically reduce their disposable incomes, hence reducing aggregate demand and causing unemployment. Also within the last 12 months 9 out of every 10 jobs created was in construction, meaning massive job loss should interest rates rise. Furthermore this will affect many other industries such as retail and whitegoods, which have benefited from this increased demand.

Fiscal Policy enables the government to inject revenue into regions or specific groups within the economy. The Budget 2004-05 aims to address demands by increasing participation and productivity through a number of initiatives. One of the major incentives that will impact upon unemployment is the reduction of the Welfare Trap. This addresses mainly low and middle-income families that remain unemployed, as they are financially better off just receiving welfare. The package will increase the incentives to take on additional work, seek advancement, acquire skills and ultimately increase the labour force participation rate.

Microeconomic Policies are policies aimed at individual industries that are seeking to improve efficiency and productivity of the producers. These have allowed governments to deregulate the Labour Market as previously the over-regulated and inflexible labour market and wage determination process was viewed as damaging to the Labour Market.

The introduction of the WORKPLACE RELATIONS ACT 1996 aims to decentralise the Workplace Relations System by discouraging the use of third parties, such as the AIRC. Instead the Australian Government are encourging encouraging employers and employees to reach outcomes based on the circumstances of their particular enterprise or organisation.

Previously rigid award regulations have been simplified. A safety net is ensured, providing minimum standards to protect employees (especially the low-paid). The actual terms and conditions are, however, determined by an agreement at the workplace. The WORKPLACE RELATIONS ACT also makes compulsory union membership illegal, allowing employees greater fredom of choice. This has also contributed to the declining power of the unions.

The WORKPLACE RELATIONS ACT now protects businesses from unlawful industrial action. This has lead to reducing strikes to the lowest levels in Australias history. Unfair dismissal laws have been replaced with a new fair go all round law, as it was found this law had contributed to the loss of at least 77,000 jobs in small businesses.

Through the introduction of the Job Network inefficiencies of job training and placement were reduced. With more efficient Labour market Services the unemployed were able find desired positions faster, hence reducing Frictional unemployment.

The Work-for-the-Dole Scheme is part of the Howard Governments mutual obligation principle. This requires 18 to 24 year olds that have been on benefits for more than six months to participate in and activity in addition to job search. This has assisted over 200,000 unemployed to rebuild self-confidence, and develop work ethic and skills Although this does encourage regeneration of work habits the Work-for-the-Dole Scheme conveys very few technical or vocational skills. The New Apprenticeship Scheme has also benefited by organising apprenticeships for 70% of school leavers that dont go to university.

The Government also provides businesss that employ those previously unemployed with wage and training subsidies to provide incentive for employers taking a risk on the unemployed. 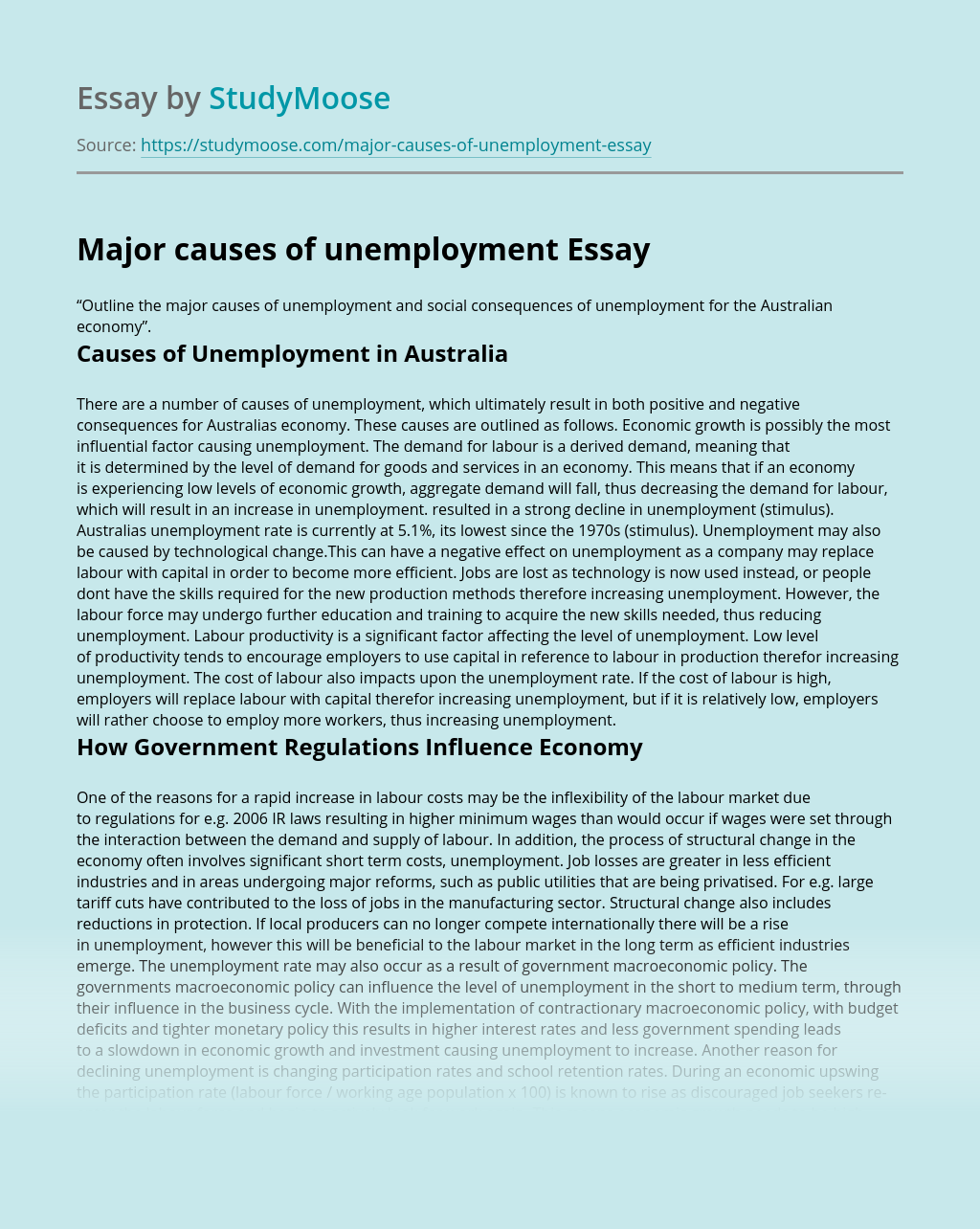 Turn in your highest-quality paper
Get a qualified writer to help you with
“ Major causes of unemployment ”
Get high-quality paper
Helping students since 2015
Stay Safe, Stay Original