The Debate on Great Zimbabwe History

A heated debate ensued between Chirikure and his colleagues with Huffman about Great Zimbabwe. This debate continued for several years. In this essay, I will follow the debate chronologically by presenting the chief arguments of each side and the data they used to support their arguments. Great Zimbabwe is one of the most well-known archaeological sites in the world (Chirikure, Pollard, Manyanga & Bandama, 2013:854). Archaeologists have estimated that millions of oblong granite blocks and significant amounts of labour were used to build the sites (Chirikure et al.

Don't use plagiarized sources. Get your custom essay on
“ The Debate on Great Zimbabwe History ”
Get custom paper
NEW! smart matching with writer

, 2013:855). Chirikure and Pikirayi (2008:978) noted that the site consists of stone-walled enclosure on the hill (also known as the Hill Complex) and in the adjacent valley (also known as the Valley Enclosures). Also on this site are other unwalled areas (Chirikure & Pikirayi, 2008:978). According to Sinclair (as cited by Chirikure & Pikirayi, 2008:978) two perimeter walls established the inner and outer limits of the site.

The chronology of Great Zimbabwe has been established by using a combined framework of stratigraphy, pottery sequences, radiocarbon dates and architectural history (Chirikure & Pikirayi, 2008:980).

Period IV dated from AD 1450-1833 and yielded pottery known as Class 4 (Chirikure et al., 2013:856). Period V dated AD 1833-1900 represented the last phase of occupation of the site (Chirikure et al., 2013:856).Chirikure and Pikirayi (2008:980-981) studied the types of wall fabric used that can be found on the site. They also revisited radiocarbon dates from Great Zimbabwe to confirm the development of farming communities, stonewalling, solid clay floors and clay built houses the use of lintels and other peripheral structures (Chirikure & Pikirayi, 2008:982-983).

After a critical assessment of the chronology, architectural history and material culture, Chirikure and Pikirayi (2008:991) concluded that Great Zimbabwe emerged from local farming communities as a series of aristocratic centres that followed one another in a manner consisted of Shaona systems of political succession and chiefly politics. Chirikure and Pikirayi furthermore noted that the focus of power moved from the Western Enclosure on the hill in the twelfth century to the Great Enclosure, the Upper Valley and finally the Lower Valley in the early sixteenth century when the Great Zimbabwe’s prominence ended. They argued that the sequence of events disprove structuralist hypothesis that claimed that different parts of the ruin were active at the same time and could therefore be dedicated to different activities, rituals or genders (Chirikure & Pikirayi, 2008:991). Huffman (2010:321; 2011:27) countered Chirikure and Pikirayi’s (2008) argument by stating that there were three problems associated with their interpretation of the data. Firstly they used an inappropriate principle of political succession because the principle of succession they based their argument on, is flawed since contact with the outside world fundamentally affected Shona society (Huffman, 2010:322).

Secondly, their chronology was outdated since, according to Huffman (2010:324), Chirikure and Pikirayi (2008) used Chipunza’s data for establishing their sequence and dating of stonewalling. Huffman (2008:324, 2011:29) pointed out that Chipunza’s data is incorrect because it did not include an important stratigraphic point that the first stonewall in the Hill Ruin rests on top a sloping bank consisting of broken and decomposed daga structures. Huffman (2011:27) urged researchers to use Robinson’s data that was based of the latter’s excavations that established a general sequence of ceramics and periods which also correlated with different types of deposit found at the site.

Thirdly, they treated the Great Zimbabwe site as if it was the only site of its kind (Huffman, 2010:321). Huffman (2010:327) argued that any interpretations of the data concerning Great Zimbabwe need to take into account other Zimbabwe capitals. Huffman (2011:29) also claimed that Chirikure and Pikirayi derived their arguments from sixteenth to seventeenth century Portuguese eyewitness accounts of the Zimbabwe culture as well as Shona and Venda ethnography. Huffman (2011:37) furthermore re-empathized that the Zimbabwe pattern he proposed was based on normative principles about special categories and their relationships. He noted that each Zimbabwe capital needed (1) a palace, (2) a court, (3) a compound for the leader’s wives, (4) a place for commoners and, (5) places for guards to function (Huffman, 2011:37).

This relationship between special categories in terms of issues such as status, life forces and security formed the basis of Huffman’s cognitive model (Huffman, 2011:38). Huffman’s cognitive model refers to a cognitive settlement pattern that represents a complicated system of interconnected social and cultural relationships (Huffman, 2012:233). Since such social and cultural relationships were fluid, cognitive models can be used to describe changes happening at a site (Huffman, 2012:233). It can therefore be said that Huffman used a cognitive structuralist reading of space to conclude that all the various areas at the Great Zimbabwe site form part of Huffman (2008:324) finally urged Chirikure and Pikirayi to rather make use of the original data instead of relying on Chipunza’s interpretation of the data. Pikirayi and Chrikure (2011:2) responded to Huffman’s 2011 article by stating they can provide evidence for their arguments in the form of calculations and excavation reports supplied by Collett et al. (1992) (as cited in Pikirayi and Chirikure; 2011:2). They also stated that their argument for the shifting of headquarters was based on Karanga activity in the Mutapa state where, since the sixteenth century, centres of political power moved in accordance with change of dynasty as well as resource availability (Pikirayi & Chrirkure, 2011:2). They proposed that the Mutapa state was a direct successor of Great Zimbabwe and was situated on the northern Zimbabwe Plateau (Pikirayi & Chrirkure, 2011:2).

Pikirayi and Chirikure (2011:7) reiterated that they are doubting whether the state based at Khami was a direct successor of Great Zimbabwe and therefore serve as an example of why they did not focus on other sites. They suggested more research is needed to interpret the data from Great Zimbabwe and that space syntax (a set of techniques and methods used in the analysis of special configurations with the objective of mapping the relationships of space and society) is a possibility when such research is conducted (Pikirayi & Chirikure, 2011:11). They concluded that it is also important to look at non-built spaces and what their purpose were (Pikirayi & Chirikure, 2011:11). According to Pikirayi and Chirikure (2011:11) an in depth understanding of the material culture from the Zimbabwe sites, were needed. Huffman (2014; 2015) and Chirikure and his colleagues (Chirikure, Manyanga & Pollard, 2012; Chirikure et al., 2014) went on to have more heated debates about Great Zimbabwe, Mapungubwe and Mapela. Although they have thus far not reached an agreement about each other’s research, it should be noted that debate is good for a discipline such as Archaeology (Huffman, 2014).

Huffman (2014) concluded that such debate is necessary because the exchanges between him and Chirikure and colleagues have provided more understanding of the Great Zimbabwe site. Chirikure et al. (2012) emphasized that the interpretation of archaeological findings made in southern Africa cannot be merely interpreted from a Western viewpoint. Despite the fact that archaeologists in southern Africa has the technique of carbon dating in their midst, they still need to deal with missing, fragmentary, layered and dispersed evidence (Chirikure et al., 2012:358). Chirikure et al. (2012:358) noted that radiocarbon dating provide aggregate chronologies that doesn’t explain abrupt events. They warned that South African archaeologists should not place too much faith on absolute methods of dating to understand issues such as settlement hierarchy, political organization, intra-settlement sequencing and settlement succession (Chirikure et al., 2012:358).

The Debate on Great Zimbabwe History. (2019, Aug 20). Retrieved from https://studymoose.com/the-debate-on-great-zimbabwe-history-essay 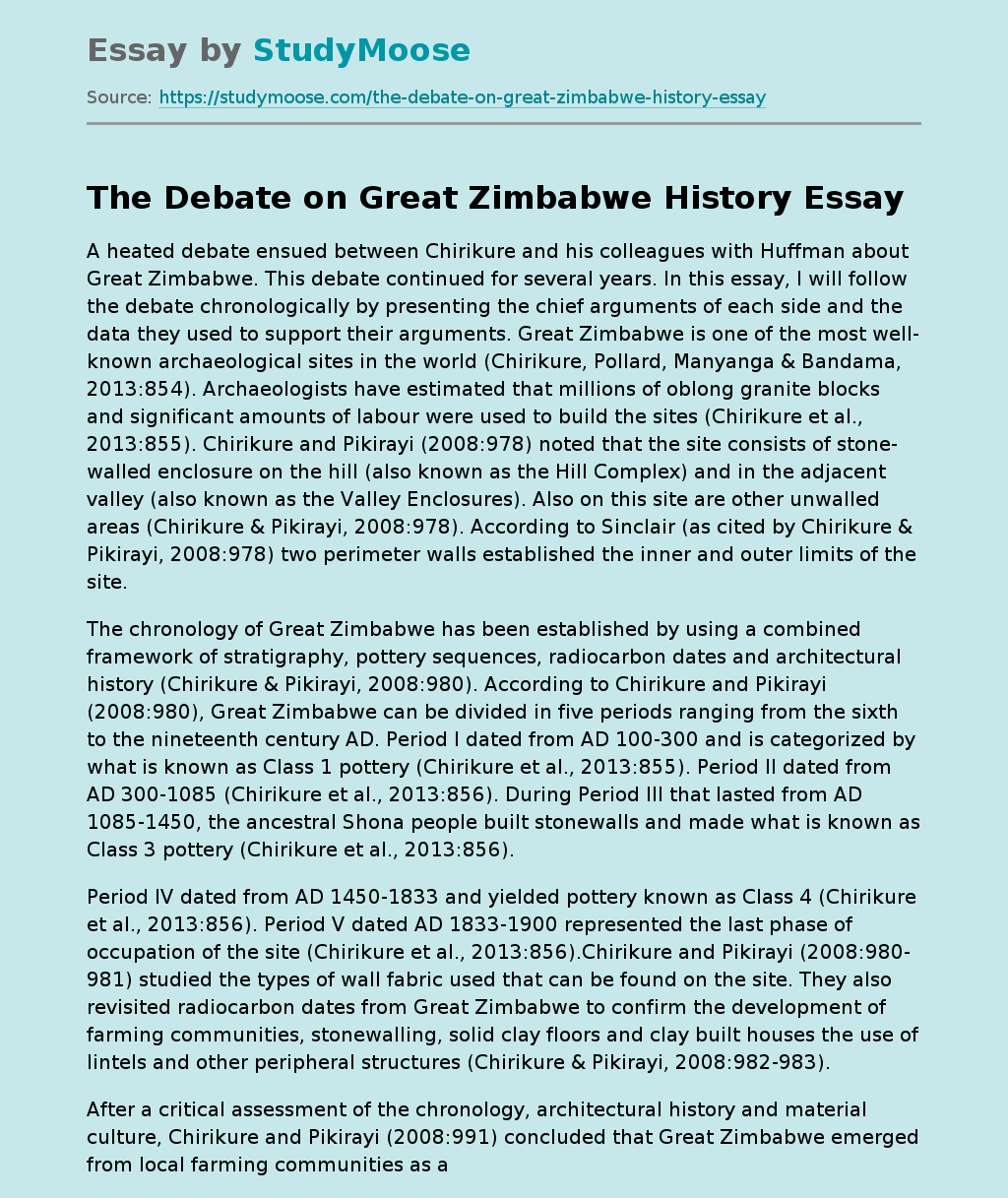