Is democracy the best form of governance?

Democracy is debatably , by far the most challenging form of governance for both, politicians and the people. Though democracy is often described as the government elected by the people, there are cases where a country’s decision to change from an authoritarian regime to a democratic one has been forced upon by foreign interventions. However, recent political insurgency in countries where democracy has been imposed shows that for the people to truly accept and respect the ideals of democracy, it must grow naturally.

Many argue that interventions can be successful given the right conditions. For instance chances of the democratic transactions being successful if the state has a stable economy is relatively higher. There have been past successes like Germany and Japan after World War II where imposition of democracy has worked. It is also seen that in many cases without intervention, the individuals who were seeking to defend their rights in their homeland would have been unsuccessful.

For example the people’s movement in Libya, though it had gained much suport would have been suppressed had it not been for the NATO’s involvement.

There is also the concept that promoting democracy promotes peace. If people are given their freedom to air their views and feelings of marginalization are prevented then terrorism is less likely to arise. Thus promoting democracy by imposing it, we increase the chances of a peaceful world. Many believe that democracy is the best form of governance which ensures that the rights of the citizens are not violated and gives them the freedom to express their ideas and thus it is their ‘humanitarian obligation’ to bring democracy to those who do not have it.

On the contrary, it is believed that an intervention is very likely to fail as the government is being formed against the country’s will and is less likely to gain support. Democratic governments prove to be successful only when the government is chosen by the people and is more likely to command respect and maintain order. Democracies are not necessarily more peaceful than other form of governments.

Just because democracies have not gone to war in the past does not mean that it is less likely to go into war in the future. Invasions, mainly by the western nations, increase the tension between the East and the West and force the formation of terrorist groups which in turn threatens world peace. The 9/11 attack is proof enough to say that imposing democracy fuels terrorist groups. In Osama Bin Laden’s “letter to the American people” he cited interventions in Somalia, India, Palestine, Chechnya, Lebanon and Iraq as reasons for the attack. Just because we prioritize and believe on political self determination being an important value, it does not mean that all nations believe in it too. For instance some nations may prioritize on religious value and prefer to be ruled by a government which promises divine authority. And some may believe in stability of the government and might not want it to keep on changing every few years.

Countries of the middle east like Qatar, Saudi Arabia, Kuwait, Jordan and so on can be taken as examples while considering countries which are non-democratic and peaceful. Taking recent happenings into consideration, western efforts to impose democracy has largely failed. For instance in countries like Iraq, Afghanistan and Vietnam the imposition of democracy has led to political instability but still western countries, United States in particular believes that it is their duty to bring democracy to other countries. Trying to transfer the western lifestyle to totally different locations with complex history and traditions is not an easy task. Besides, when people are bullied into following a completely different system, people are most likely to oppose it.

Today’s fully functional democratic countries include Spain, Portugal, Greece, etc which were once ruled by dictators and only turned into democracies after homegrown movements and the politically instable countries include Iraq, Afghanistan, Egypt, etc where democracy was imposed. Thus, we can see that imposing democracy has led to nothing but disruption in the long term. Imposing democracy has caused more disruption than peace. ‘The white man’s burden’ as the movement is most popularly referred to , has caused much tension between the west and the east. Imposing democracy in countries where people prioritize values like religion and stability is not going to be successful as the people are not going to be cooperative. And the government formed that is not formed for the people is, by definition not a democracy. Democracy, even if established by imposition will still be the ‘rule of the majority’ however for the people to truly accept this form of governance it must grow naturally.

Is democracy the best form of governance?. (2016, Mar 17). Retrieved from http://studymoose.com/is-democracy-the-best-form-of-governance-essay 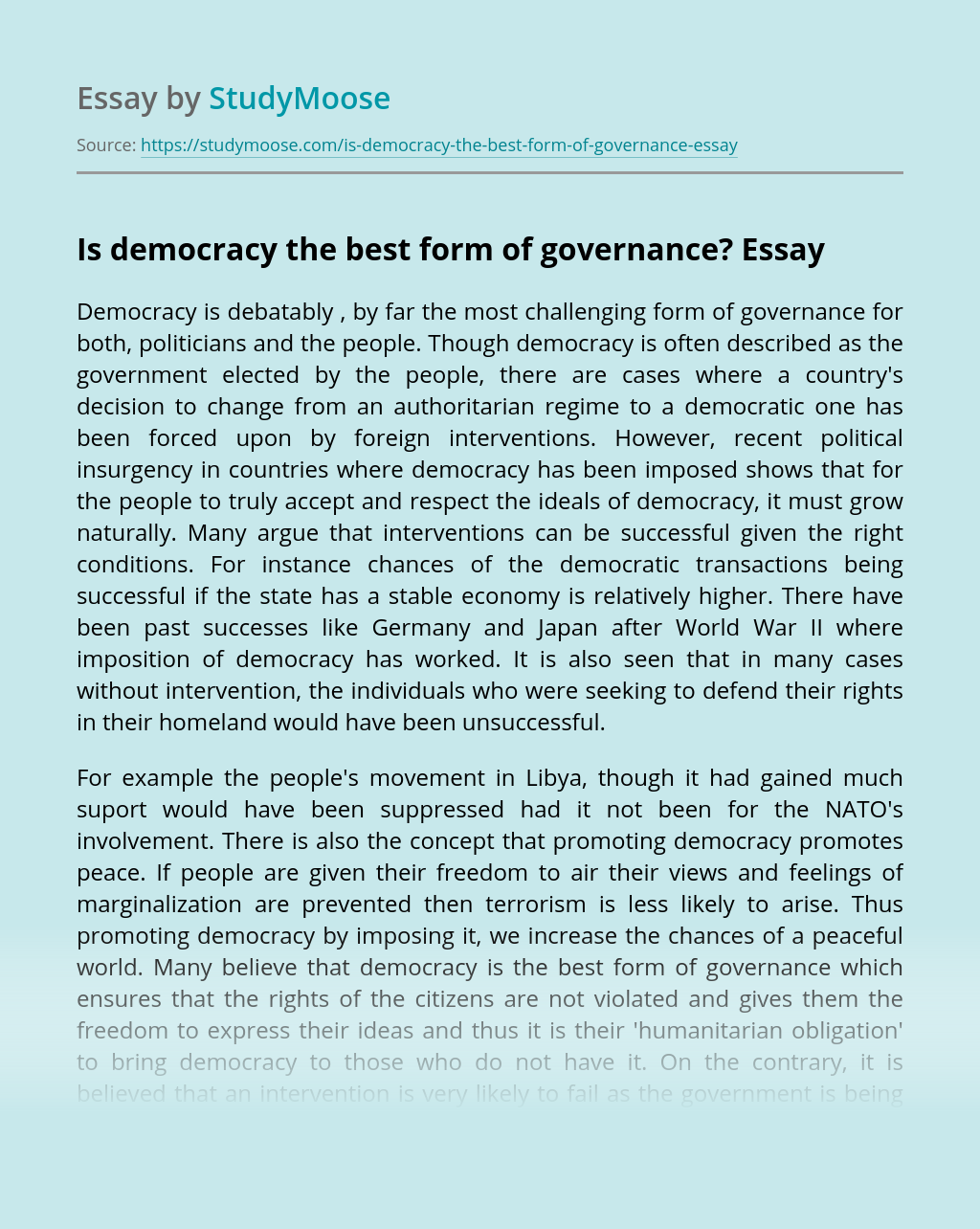 Don’t waste time
Get a verified expert to help you with Is democracy the best form of governance?
Hire verified expert
$35.80 for a 2-page paper
Stay Safe, Stay Original