Why Spanking Children Is Wrong?

Parents have been spanking their children for hundreds of years, but recently this practice has come into question. The concern is not regarding the effectiveness of spanking but the correctness of spanking. Parents should not be allowed to strike their children. Child abuse is defined as any unnecessary or intentional physical or emotional or sexual mistreatment of children. Spanking is not the only method of child discipline. Spanking is not even the most effective method of child discipline. Numerous studies have made it evident that spanking does have a negative effect on children.

Don't use plagiarized sources. Get your custom essay on
“ Why Spanking Children Is Wrong? ”
Get custom paper
NEW! smart matching with writer

Spanking children should be considered child abuse because it teaches children the wrong message about hitting, it does not teach a child to act out of conscience, but out of fear, it hurts the parent-child relationship, and there are other more effective forms of child discipline. The combination of these factors plays a large role in the inappropriateness of spanking as a form of discipline. If spanking is not the best form of discipline then it is unnecessarily causing physical and mental harm to a child, thus constituting child abuse.

Spanking teaches children the wrong message because they think that it is acceptable for one person to hit another person in order to gain compliance. They learn that by hitting another person and causing pain, one can get what he wants. Often the child is not old enough to understand that hitting is used only in certain situations, such as when a parent is disciplining his child. Even when children are old enough to understand that hitting is wrong, they have seen their parent doing it for several years and have come to accept the fact that hitting is a part of life.

Children also learn that it is all right for a big person to hit a little person. When a child is spanked he has no choice but to accept the punishment. Children are much smaller than their parents are and they know that they cannot retaliate. This teaches children that a big person can hit a little person without fear of the littler person fighting back.

This is a problem because spanking a child not only teaches him that hitting is acceptable, but that it is okay to be dominating. Children learn that they are able to get what they want through the use of fear A child who is spanked behaves out of fear rather than as a result of his conscience. These children conduct themselves properly simply because they are afraid of being spanked. Although spanking may seem to serve its initial function it fails to instill a sense of acting properly because something is right or wrong. When the parents are not present, the child has no reason to behave. Spanking does not help the child develop a self-conscience. When the child’s behavior is based on fear of being spanked, the child is not being allowed to make his or her own decisions. Spanking teaches children to operate from fear rather than reason. The child is refraining from certain behaviors because he or she does not want to be spanked, not because it is wrong.

Spanking as a method of discipline negatively effects the parent-child relationship. This relationship is important because almost everything that the parent does is reflected in his child. In the first few years of a child’s life, the parents are the primary factors in the development of the child’s personality and values. The child must rely solely on his parents for everything. The parents should make every effort to show their child love, care, and respect. This will make the child more kind, compassionate, and ultimately a better person.

Spanking a child puts both kids and parents into an adversarial relationship and risk damaging the important sense of trust necessary for raising emotionally healthy children. Parents are not showing the child love by hitting him and are certainly not building trust and respect. Spanking creates a feeling of resentment in young children, older children feel physically violated, angry, and helpless. Children do not need to be hit to know when they have done something wrong and to reason with the parent. When spanked feel bitterness, anger, and even hate towards the parent.

In addition to these three principal reasons which show the inappropriateness of spanking, there are also other concerns. One main worry about spanking is that it is a lower level form of child abuse. It is against the law for a person to hit another person. Children are also people and should not be discriminated against simply because they are smaller.

The main reason that parents use spanking as a discipline technique is because it is what they received when they were children. However, in many cases spanking has nothing to do with helping the child. It is used as a quick solution to stop negative behavior with no real regard for the long-term outcome. Parents often spank their children because they themselves are angry. These parents simply cannot handle a situation and take it out on their child. Spanking might be more accepted if it was the only, or the most successful, form of discipline, but it is not. Spanking is simply a short-term fix of a child’s discipline problems. Two of the widely used alternatives to spanking are the time-out and restriction punishments. Time-out is most effective when administered to children under ten years of age, and a restriction mostly benefits children over ten years old. Both of these methods, while effective, also have a positive influence on the child, they teach the child discipline without the use of force, help the child form a genuine conscience, and strengthen the parent-child relationship.

The time-out removes the child from a certain situation to allow him or her time to settle down and to understand why a behavior is inappropriate. Whenever the child misbehaves, the parent takes him or her to a designated spot for a minute or so, depending on the age of the child; the time is longer for older children. During the time-out, the child thinks about what he did wrong and should always be combined with an explanation of why the behavior is bad. Time-out is a way to teach children self-control by giving them an opportunity to change their behavioral course. The time-out helps the child learn better ways of handling the situation that originally got him into trouble. Eventually the child will begin to understand why certain behaviors are wrong. While both the time-out and spanking appear to be effective, the former is much more suitable. Unlike spanking, it does not require the threat of force or create hostility between the parent and child. By allowing the child to calm down, he is able to think about the specific situation and how he could have handled it differently.

When children are spanked, feelings of anger and resentment towards their parent prevent them from learning why their actions were wrong. While the time-out is effective for developing a conscience in younger children, older children require a different type of discipline. A restriction is the taking away of a special privilege from a child. Some examples of special privileges include watching television, playing video games, going out with friends, or talking on the telephone. Restriction is based upon the premise that children must earn special privileges. These privileges are earned by appropriate behavior and respecting important family rules.

For example, when a child breaks a rule such as staying up too late watching television the parent can use a restriction by forbidding him or her to watch television for the next couple of days. This method of discipline shows children respect by giving them the opportunity to control when and how often they are disciplined as a result of their own actions. They have no reason to get mad at the parent because they are the ones who misbehaved. A restriction also teaches the child the importance of responsibility and strengthens the parent-child relationship by making the child feel important.

In an effort to create well-behaved children, many parents are spanking their children. This is not an appropriate form of discipline. When parents spank their child, they are instilling fear, not teaching a lesson. Spanking creates anger and resentment within the child, weakening the parent-child relationship. More positive tools of discipline have been developed that will not only achieve compliant behavior, but also aid in the development of a conscience. Spanking is unnecessary and harmful to children regardless of the reasons for its use. While spanking children may be effective in stopping immediate bad behavior, it is a form of child abuse.

Why Spanking Children Is Wrong?. (2016, Jul 17). Retrieved from https://studymoose.com/why-spanking-children-is-wrong-essay 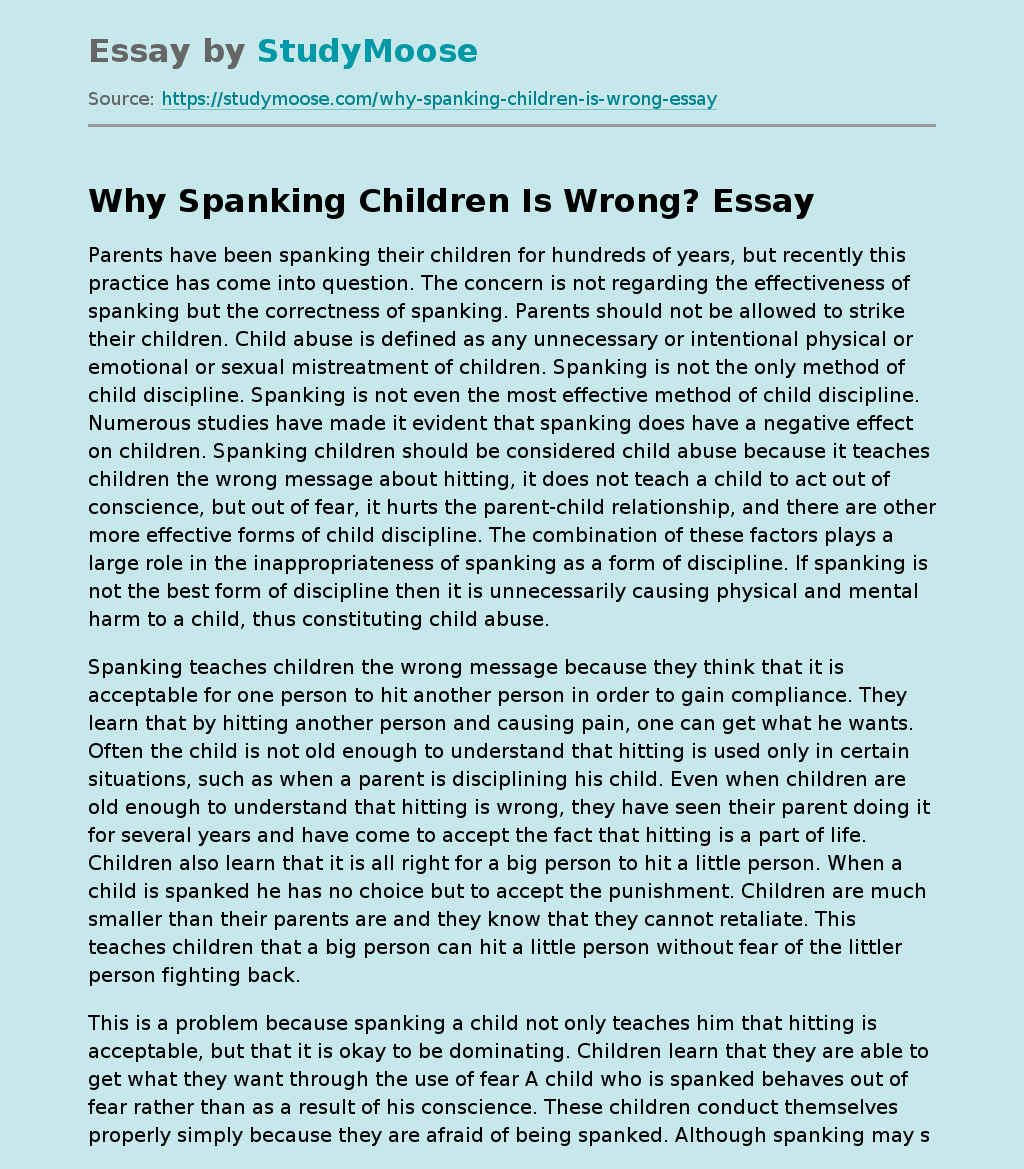