Capital Punishment has long been a controversial issue. Your political views or religious beliefs may cause you to favor one side of the argument against the other. The death penalty is the most extreme punishment you can receive for committing a crime. But is the death penalty worth its exorbitant cost? The death penalty is vastly more expensive than the cost of a life sentence in prison. The “threat,” “deterrence,’ “terror” does not exist to criminals. They do not fear the ultimate penalty.

Don't use plagiarized sources. Get your custom essay on
“ Capital Punishment Controversy ”
Get custom paper
NEW! smart matching with writer

Large numbers of people are placed onto death row and nearly 40% of the people sentenced to receive the punishment. The death penalty and its high price tag are simply not worth wasting “taxpayers” money. The Death Penalty is not an effective deterrent.

The trial process that leads to someone being given the death penalty costs nearly $740,000. The execution, via lethal injection, costs about $400,000. After the trial is complete and the person has been executed, the total cost is approximately .

26 million. $90,000 of that figure could be saved by simply placing the person in prison for life. If each death row inmate that was executed in 2018 would have just been sentenced to life in prison, $2,250,000 would have been saved. In the last ten years, 357 individuals were executed. $32,130,000 could have been used for something more deserving. The government is using taxpayers’ money to pay for these executions, but are they efficient? 1,427,341 violent crimes were committed in 2017 along with 7,694,086 property crimes. Capital punishment, time in prison, community service, ect., is not stopping the people from committing the crimes–this is a deterrence issue, not an efficiency one.

So why not end capital punishment and save much wasted time and money? The crimes are not slowing or decreasing. The rate is changing minimally. The people are committing most of these crimes in the spur of the moment. Only 30% of the crimes committed are planned.

The deterrent is not effective so stop throwing the money away by continuing with capital punishment. The vast majority of homicides are spontaneous and domestic, many even know their killer personally. Many criminals also realize that only about 50% of people sentenced to the death penalty actually receive the punishment. From January to April of 2019, 14 people have received the death penalty, three have been executed, six have stayed, four have been rescheduled, and one has not reached the date yet. That means nearly 46% of 2019’s prosecuted persons have been executed. This does not strike any fear into the heart or mind of these people that are committing these horrid crimes. The death penalty has been active and ongoing for centuries. Is it time to put the ancient method of death to a halt? Is the price we pay to complete the execution really worth it? Many people face the death penalty but the execution is unlikely. Taxpayers are sending their money to the government to fund this method and for its price, it is not effective. Yes, the person will be executed but the crimes are still being committed by other criminals. The threat of death does not strike fear into these individuals. So why do we continue to pay for it?

Capital punishment was used back in medieval times, ancient history, and the middle ages. In medieval and early modern Europe, before the development of modern prison systems, the death penalty was also used as punishment. While Henry VIII of England ruled, nearly 72,000 people were executed. In early modern Europe, great panic regarding witchcraft flooded Europe and the European colonies in North America. Widespread claims that Satanic witches were operating as an organized threat to Christendom to hurt Christians. As a result, thousands of people were executed for witchcraft and executed through witch trials during the early modern period. In Nazi Germany, there were many forms of capital punishment. Hanging, decapitation, and death by shooting, gassing, etc. Military organizations employed capital punishment as a discipline technique to soldiers that disobeyed laws. One method of execution has also been firing squad once guns became common amongst soldiers in Nazi Germany. More than one million Soviet citizens were executed during the Great Terror of 1937 to 1938, nearly all were executed by a single shot to the head face or neck. The Jewish citizens that lived in Nazi Germany at the time of Adolph Hitler faced various forms of capital punishments after being placed into concentration camps. Many were taken away from their families and as soon as they reached the camp were killed.

Movements in most of the world have been to change to private and less painful executions. France developed the guillotine in the 18th century, while Britain banned hanging, drawing, and quartering in the early 19th century. “Hanging by turning the victim off a ladder or by kicking a stool or a bucket, which causes death by suffocation, was replaced by long drop ‘hanging’ where the subject is dropped a longer distance to dislocate the neck and sever the spinal cord.” Mozaffar ad-Din Shah Qajar, Shah of Persia introduced throat-cutting as a painless alternative to violent methods of executions used in those time periods. In the U.S., electrocution, and gas inhalation were introduced as more humane executions rather than hanging, but have been almost entirely superseded by lethal injection. Very few countries still have slow hanging methods, decapitation, and stoning. Even though these methods are less violent they are still killing people and costing people a lot of money.

¨A study of executions in the United States between 1977 and 2001 showed that at least 34 of the 749 executions, had ‘unanticipated problems or delays that caused, at least arguably, unnecessary agony for the prisoner or that reflect gross incompetence of the executioner’. The rate of these ‘botched executions’ remained steady over the period of the study. A separate study published in The Lancet in 2005 found that in 43% of cases of lethal injection, the blood level of hypnotics was insufficient to guarantee unconsciousness. However, the U.S. Supreme Court ruled in 2008 (Baze v. Rees) and again in 2015 (Glossip v. Gross) that lethal injection does not constitute cruel and unusual punishment.”

Abolitionist in practice countries (have not executed anyone during the last 10 years and are believed to have a policy or established practice of not carrying out executions): 29

States without the death penalty

Wrongful convictions are another reason this practice must be outlawed. “The Registry’s annual report on exonerations revealed a record 166 exonerations in 2016—and a record number of exonerations involving police or prosecutorial misconduct. 54 of the 2016 exonerations—nearly a third—involved wrongful homicide convictions. “At least 13 of these cases involved the wrongful use of the death penalty—meaning that the death penalty played a role in nearly a quarter of the 54 homicide exonerations in 2016.” Many of these wrongful convictions are due to false eye witness testimonies, false confessions, evidence issues, and inadequate defense systems that are not up to par when defending their clients. The Innocence Project, founded in 1992 by Peter Neufeld and Barry Scheck at Cardozo School of Law, exonerates the wrongly convicted through DNA testing and reforms the criminal justice system to prevent future injustice. The innocence project does everything they can to prevent innocent people from being executed and spending time in prison but they can not help the ones that have already been executed. If executions were deemed unconstitutional then the innocence project would have a chance to save many more lives.

A large majority of Americans support the death penalty. Most people are in favor of capital punishment believe that the penalty only applies to some of the various crimes, according to a Pew Research Center survey conducted in 2011. Many Americans have a great lack of information when they choose to decide how they fell on the topic. “By contrast, the question of whether executions discourage criminals from violent acts is not up to the conscience to decide. Despite extensive research on the question, criminologists have been unable to assemble a strong case that capital punishment deters crime. ‘We’re very hard pressed to find really strong evidence of deterrence,’ said Columbia Law School’s Jeffrey Fagan. States have been executing fewer and fewer people over the past 15 years.” Many states have recently abolished any and all forms of capital punishment. 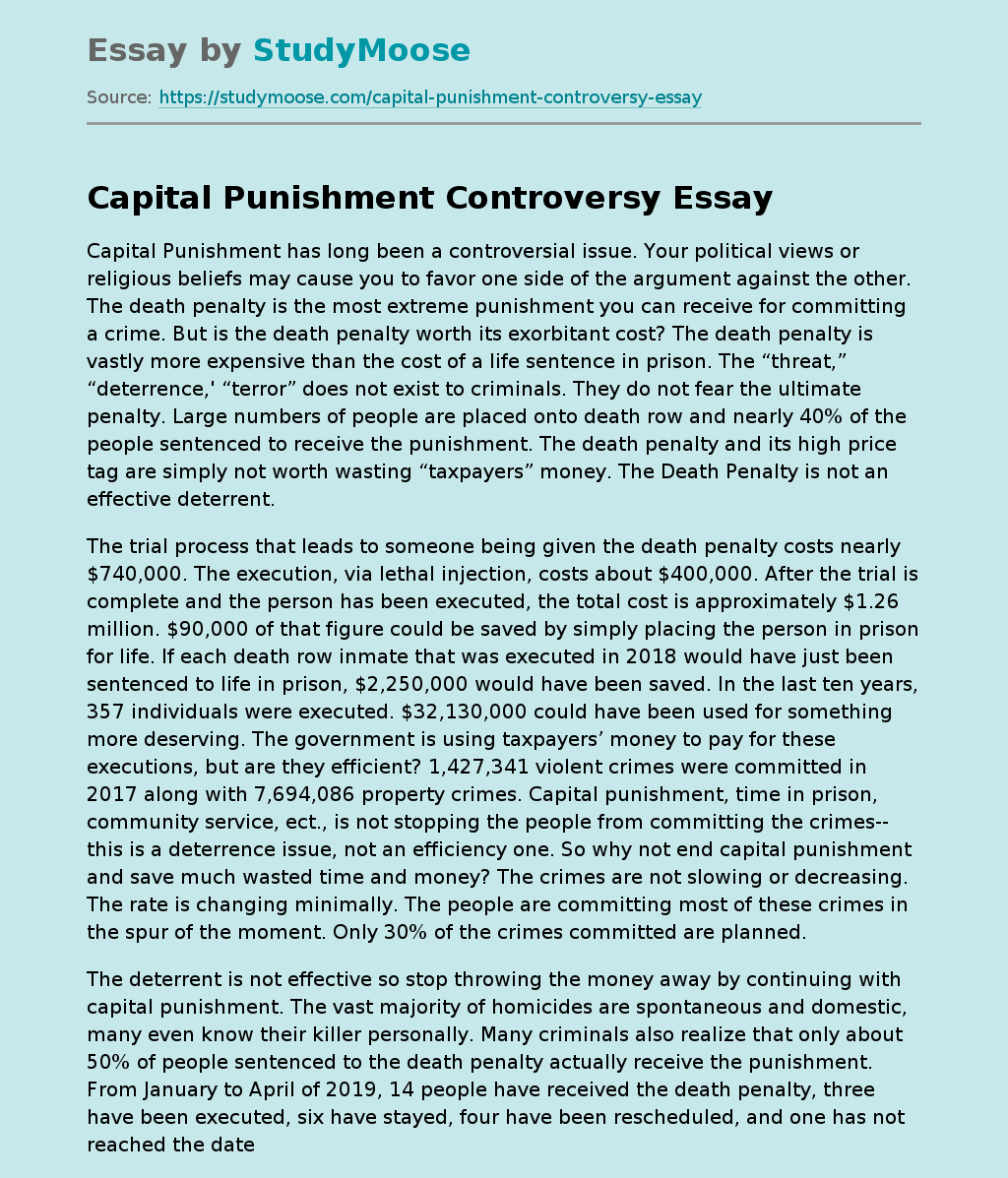