Speech on Capital Punishment Should Not Be Abolished

Criminal Justice , 2009 David B. Muhlhausen, “The Death Penalty Deters Crime and Saves Lives,” Heritage Foundation, August 28, 2007. www.heritage.org. Reproduced by permission of the author. “Capital punishment produces a strong deterrent effect that saves lives.” In the following viewpoint, David B. Muhlhausen argues that capital punishment should not be abandoned because it deters crimes, saves lives, and the majority of American citizens support its use. Additionally, he maintains that evidence does not support claims that racial discrimination results in a disproportionate number of African Americans incarcerated on death row.

Don't use plagiarized sources. Get your custom essay on
“ Speech on Capital Punishment Should Not Be Abolished ”
Get custom paper
NEW! smart matching with writer

David B. Muhlhausen is a senior policy analyst in the area of criminal justice for the Heritage Foundation, a conservative public policy research organization.

As you read, consider the following questions: 1. According to the 2006 study conducted by the RAND Corporation, what affects whether the death penalty is sought as punishment for a crime? 2. What are the three findings of Joanna M. Shepherd’s analysis of data from 1977 to 1999 on the death penalty? 3.

Based on research conducted by H. Naci Mocan and R. Kaj Gittings, how many murders result from each commutation of a death row sentence? While opponents of capital punishment have been very vocal in their opposition, Gallup opinion polls consistently demonstrate that the American public overwhelmingly supports capital punishment. In Gallup’s most recent poll, 67 percent of Americans favor the death penalty for those convicted of murder, while only 28 percent are opposed. From 2000 to the most recent poll in 2006, support for capital punishment consistently runs a 2:1 ratio in favor. Despite strong public support for capital punishment, federal, state, and local officials must continually ensure that its implementation rigorously upholds constitutional protections, such as due process and equal protection of the law.

However, the criminal process should not be abused to prevent the lawful imposition of the death penalty in appropriate capital cases.

The resulting 2006 RAND study set out to determine what factors, including the defendant’s race, victim’s race, and crime characteristics, affect the decision to seek a death penalty case. Three independent teams of researchers were tasked with developing their own methodologies to analyze the data. Only after each team independently drew their own conclusions did they share their findings with each other. When first looking at the raw data without controlling for case characteristics, RAND found that large race effects with the decision to seek the death penalty are more likely to occur when the defendants are white and when the victims are white. However, these disparities disappeared in each of the three studies when the heinousness of the crimes was taken into account.

The RAND study concludes that the findings support the view that decisions to seek the death penalty are driven by characteristics of crimes rather than by race. RAND’s findings are very compelling because three independent research teams, using the same data but different methodologies, reached the same conclusions. While there is little evidence that the federal capital punishment system treats minorities unfairly, some may argue that the death penalty systems in certain states may be discriminatory. One such state is Maryland. In May 2001, then-Governor Parris Glendening instituted a moratorium on the use of capital punishment in Maryland in light of concerns that it may be unevenly applied to minorities, especially African-Americans. In 2000, Governor Glendening commissioned University of Maryland Professor of Criminology Ray Paternoster to study the possibility of racial discrimination in the application of the death penalty in Maryland.

The results of Professor Paternoster’s study found that black defendants who murder white victims are substantially more likely to be charged with a capital crime and sentenced to death. In 2003, Governor Robert L. Ehrlich wisely lifted the moratorium. His decision was justified. In 2005, a careful review of the study by Professor of Statistics and Sociology Richard Berk of the University of California, Los Angeles, and his coauthors found that the results of Professor Paternoster’s study do not stand up to statistical scrutiny. According to Professor Berk’s re-analysis, “For both capital charges and death sentences, race either played no role or a small role that is very difficult to specify. In short, it is very difficult to find convincing evidence for racial effects in the Maryland data and if there are any, they may not be additive.” Further, race may have a small influence because “cases with a black defendant and white victim or ‘other’ racial combination are less likely to have a death sentence.”

Federal, state, and local officials need to recognize that the death penalty saves lives. How capital punishment affects murder rates can be explained through general deterrence theory, which supposes that increasing the risk of apprehension and punishment for crime deters individuals from committing crime. Nobel laureate Gary S. Becker’s seminal 1968 study of the economics of crime assumed that individuals respond to the costs and benefits of committing crime.

According to deterrence theory, criminals are no different from law-abiding people. Criminals [economist Paul H. Rubin writes] “rationally maximize their own self-interest (utility) subject to constraints (prices, incomes) that they face in the marketplace and elsewhere.” Individuals make their decisions based on the net costs and benefits of each alternative. Thus, deterrence theory provides a basis for analyzing how capital punishment should influence murder rates. Over the years, several studies have demonstrated a link between executions and decreases in murder rates. In fact, studies done in recent years, using sophisticated panel data methods, consistently demonstrate a strong link between executions and reduced murder incidents.

The rigorous examination of the deterrent effect of capital punishment began with research in the 1970s by Isaac Ehrlich, currently a University of Buffalo Distinguished Professor of Economics. Professor Ehrlich’s research found that the death penalty had a strong deterrent effect. While his research was debated by other scholars, additional research by Professor Ehrlich reconfirmed his original findings. In addition, research by Professor Stephen K. Layson of the University of North Carolina at Greensboro strongly reconfirmed Ehrlich’s previous findings.

Numerous studies published over the past few years, using panel data sets [statisticians make distinctions between panel sets vs. what they call “one-dimensional,” or “cross-sectional” data sets] and sophisticated social science techniques, are demonstrating that the death penalty saves lives. Panel studies observe multiple units over several periods. The addition of multiple data collection points gives the results of capital punishment panel studies substantially more credibility than the results of studies that have only single before-and-after intervention measures. Further, the longitudinal nature of the panel data allows researchers to analyze the impact of the death penalty over time that cross-sectional data sets cannot address. Using a panel data set of over 3,000 counties from 1977 to 1996, Professors Hashem Dezhbakhsh, Paul R. Rubin, and Joanna M. Shepherd of Emory University found that each execution, on average, results in 18 fewer murders.

Using state-level panel data from 1960 to 2000, Professors Dezhbakhsh and Shepherd were able to compare the relationship between executions and murder incidents before, during, and after the U.S. Supreme Court’s death penalty moratorium. They found that executions had a highly significant negative relationship with murder incidents. Additionally, the implementation of state moratoria is associated with the increased incidence of murders. Separately, Professor Shepherd’s analysis of monthly data from 1977 to 1999 found three important findings. First, each execution, on average, is associated with three fewer murders. The deterred murders included both crimes of passion and murders by intimates. Second, executions deter the murder of whites and African-Americans. Each execution prevents the murder of one white person, 1.5 African-Americans, and 0.5 persons of other races. Third, shorter waits on death row are associated with increased deterrence. For each additional 2.75-year reduction in the death row wait until execution, one murder is deterred.

Professors H. Naci Mocan and R. Kaj Gittings of the University of Colorado at Denver have published two studies confirming the deterrent effect of capital punishment. The first study used state-level data from 1977 to 1997 to analyze the influence of executions, commutations, and removals from death row on the incidence of murder. For each additional execution, on average, about five murders were deterred. Alternatively, for each additional commutation, on average, five additional murders resulted. A removal from death row by either state courts or the U.S. Supreme Court is associated with an increase of one additional murder. Addressing criticism of their work, Professors Mocan and Gittings conducted additional analyses and found that their original findings provided robust support for the deterrent effect of capital punishment. Two studies by Paul R. Zimmerman, a Federal Communications Commission economist, also support the deterrent effect of capital punishment. Using state-level data from 1978 to 1997, Zimmerman found that each additional execution, on average, results in 14 fewer murders.

Zimmerman’s second study, using similar data, found that executions conducted by electrocution are the most effective at providing deterrence. Using a small state-level data set from 1995 to 1999, Professor Robert B. Ekelund of Auburn University and his colleagues analyzed the effect that executions have on single incidents of murder and multiple incidents of murder. They found that executions reduced single murder rates, while there was no effect on multiple murder rates. In summary, the recent studies using panel data techniques have confirmed what we learned decades ago: Capital punishment does, in fact, save lives. Each additional execution appears to deter between three and 18 murders. While opponents of capital punishment allege that it is unfairly used against African-Americans, each additional execution deters the murder of 1.5 African-Americans. Further moratoria, commuted sentences, and death row removals appear to increase the incidence of murder.

The strength of these findings has caused some legal scholars, originally opposed to the death penalty on moral grounds, to rethink their case. In particular, Professor Cass R. Sunstein of the University of Chicago has commented: If the recent evidence of deterrence is shown to be correct, then opponents of capital punishment will face an uphill struggle on moral grounds. If each execution is saving lives, the harms of capital punishment would have to be very great to justify its abolition, far greater than most critics have heretofore alleged. Americans support capital punishment for two good reasons. First, there is little evidence to suggest that minorities are treated unfairly. Second, capital punishment produces a strong deterrent effect that saves lives.

Speech on Capital Punishment Should Not Be Abolished. (2017, Jan 09). Retrieved from https://studymoose.com/speech-on-capital-punishment-should-not-be-abolished-essay 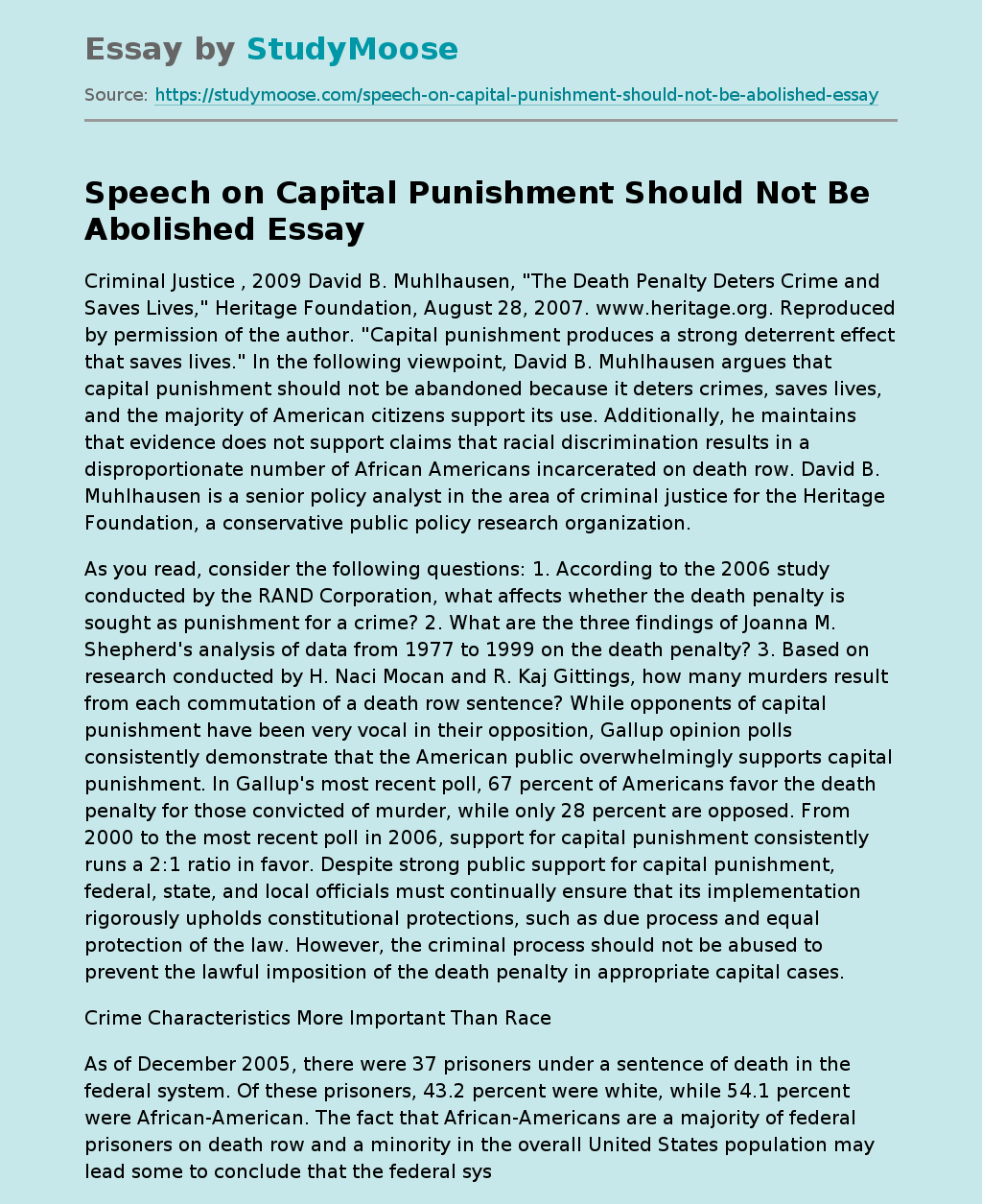