Should the Minimum Wage Be Abolished

A. Marginalized workers Minimum wage harms a large percentage of the working groups, mostly the marginal workers which includes teenagers, the less educated workers and the more aged workforce. Based on the 2005 data released by the Bureau of Labor Statistics, the law also discriminates workers belonging to ethnic minorities. The unemployment rate for Hispanic and Black teens belonging in the 16-17 age groups were 25% and 40.9, respectively. This high percentage can be brought down if only the minimum wage is abolished so the society can maximize the number of young people who are willing to work, even if it’s for small wages.

Don't use plagiarized sources. Get your custom essay on
“ Should the Minimum Wage Be Abolished ”
Get custom paper
NEW! smart matching with writer

Having a paying job for the young workers teaches values such as discipline, hard work and responsibility. Most of the minimum wage jobs benefit the workers with a set of marketable skills. Therefore setting a higher minimum wage would lead employers to require a better set of learned skills from its applicants.[1] But if we let businesses to pay smaller entry wages, they will offer more opportunities to jobseekers with no experience.

The jobseeker can now gain valuable experience that can then serve as a stepping stone that will lead them to gain a better paying job.

B. Encourage businesses Abolishing the minimum wage will also allow businesses to achieve greater efficiency and lower prices. As cost of labor goes down, business output goes up since more workers are hired to finish a certain job. Also, the price of business products and services will go down relative to the wage flexibility exercised by a company.

In relation to that, abolishing the minimum wage will also discourage companies from outsourcing to other countries with better labor policies or lower wage rates. Companies who are trying to cut costs are enticed to hire workers to achieve a level that’s competitive. The best condition for a business to grow and compete is to give them greater flexibility in maximizing profit and minimizing cost.

All companies will be affected by minimum wage laws, including small companies and non-profit organizations. Most of these firms which thrive on low productivity workers to sustain daily operations will be forced to absorb the increase in labor costs. These firms can either reduce staff or cut costs in certain areas of their businesses. In the case of small companies, prices will be raised to cover the labor costs and customers will be forced to look for product alternatives and result to a decrease in revenues. Some small companies and non-profit organizations may eventually have to close down if they are unable to cope with the changes that the increase in minimum wages may impose.

C. Labor alternatives With the increase in labor costs mandated by the minimum wage law, firms may find it more practical to invest in machines to replace staff workers. Tasks such as running a cash register or even digital marketing can now be automated. Not only will automation be less expensive, it may also be more efficient and less time-consuming.

D. Global competitiveness In a competitive global economy, companies strive to create affordable yet high quality products since they attract more consumers. Evidently, products which are cheaper but are equally reliable as their counterparts receive more attention since consumers have the ability to buy them. In order to achieve this, companies create efficient ways to maximize labor to meet market prices.

Lowering the cost of labor definitely makes the product cheaper. Such countries with high minimum wage have difficulties in making their product’s prices as low as possible. By setting a minimum wage, companies are more likely to impose a higher selling price per product since the cost per hour of direct labor goes up. This sets a disadvantage to the company. A good example is that US companies will definitely work harder to compete globally against foreign countries since they have a high minimum wage. Other (foreign) companies without minimum wage definitely have an advantage in controlling these prices since they can hire people that can produce the same products with less labor costs. These companies can also increase the quality of their products since they can hire more people to do the job.

Should the Minimum Wage Be Abolished. (2016, Nov 27). Retrieved from https://studymoose.com/should-the-minimum-wage-be-abolished-essay 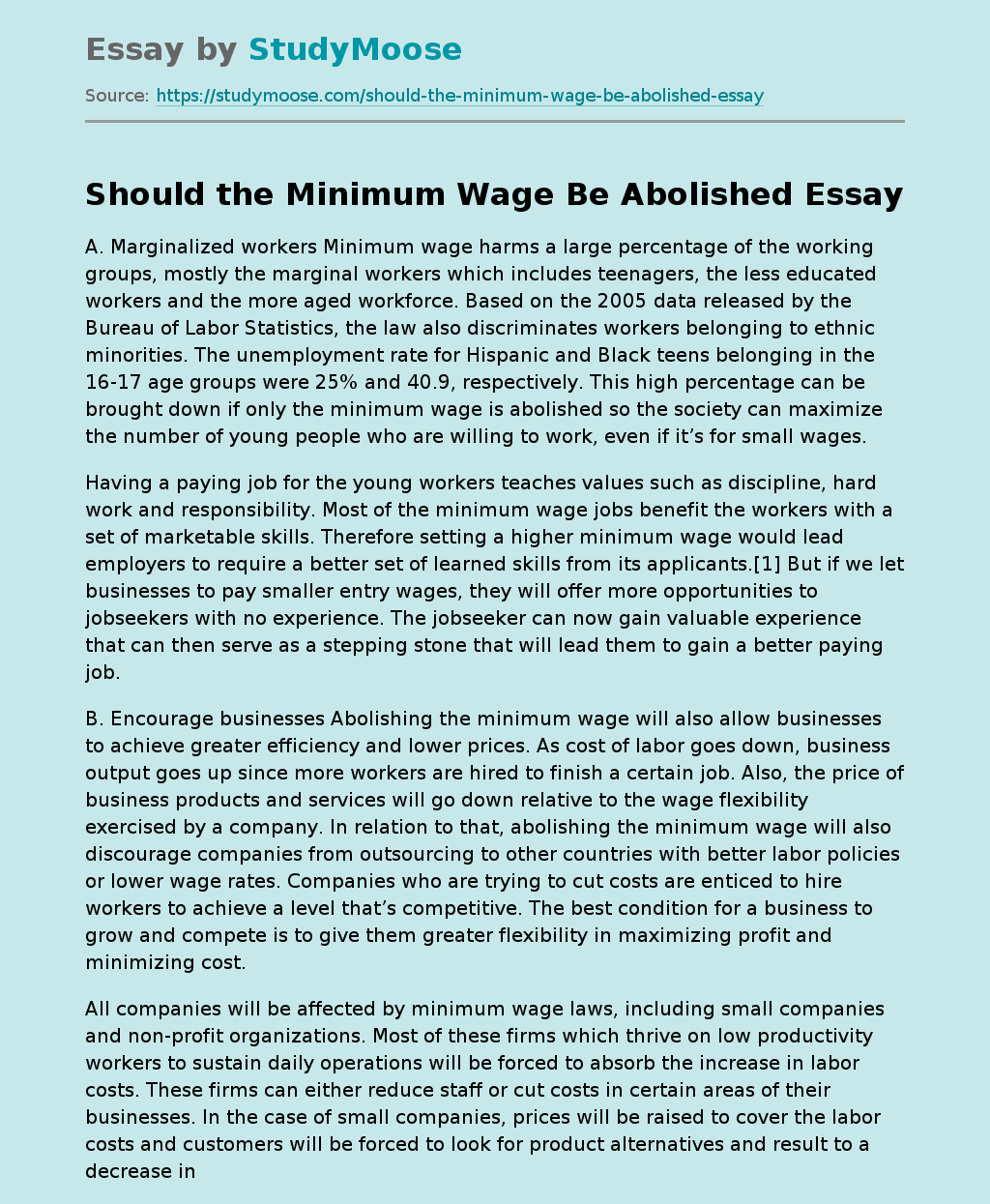