Should Exams be Abolished or Not?

Exam is a word that most students fear off. A word that has a magic power to change a happy person into a frustrated and nervous one. However, it is a big part of the school that all students have to go through. There are advantages in exams, but there are people who think the opposite that exams have more disadvantages to the students and should be abolished.

Some people say that exams should not be abolished, because they say that exams are the only way for teachers to see the student’s level, it builds high sense of responsibilities, and it gives him pressure that will be useful for him later in his life.

Don't use plagiarized sources.
Get Your Custom Essay on Should Exams be Abolished or Not? Just from $13,9/Page

The students also compete with not only themselves, but with other people. They do not want to see an increase in their knowledge. They want to beat their classmates to be on top of the class. Another reason is when the student knows that his hard work has paid off, he will feel a self satisfaction inside of him and he will be so proud of himself.

So, those people who say that exams should not be abolished think of exams as a self test to see where the students are, and how good they do.

Read more: Exams Should Be Abolished

I personally think that exams should be abolished. Because exams are stressful and they do not show real results of the student’s hard work and mental ability. They favor people who are gifted or have good memory and good exam techniques, and neglect the less able students who actually need the most help. Even though, those who have good memories may not be very smart during the classes and may not understand most of what they are memorizing. In addition, teachers may grade student papers differently. Sometimes the same teacher will give the student a different mark to the same paper after a few months. Another important reason I think is that students should not be judged on their performance on one day. For example, if a student got sick before the exam and he could not study well and got a bad grade or failed with the fact that he is an “A” student. Therefore, I do not think it is fair for him.

Finally, there are always going to be people who are with or against taking exams. It is a controversial issue in all countries. However, I believe in regular testing through out the year. I say doing projects during the year, grades for participation after every lesson, and having weekly assessment is the best solution and the most fair approach for this debate.

Should Exams be Abolished or Not?. (2016, Jul 25). Retrieved from https://studymoose.com/should-exams-be-abolished-or-not-essay 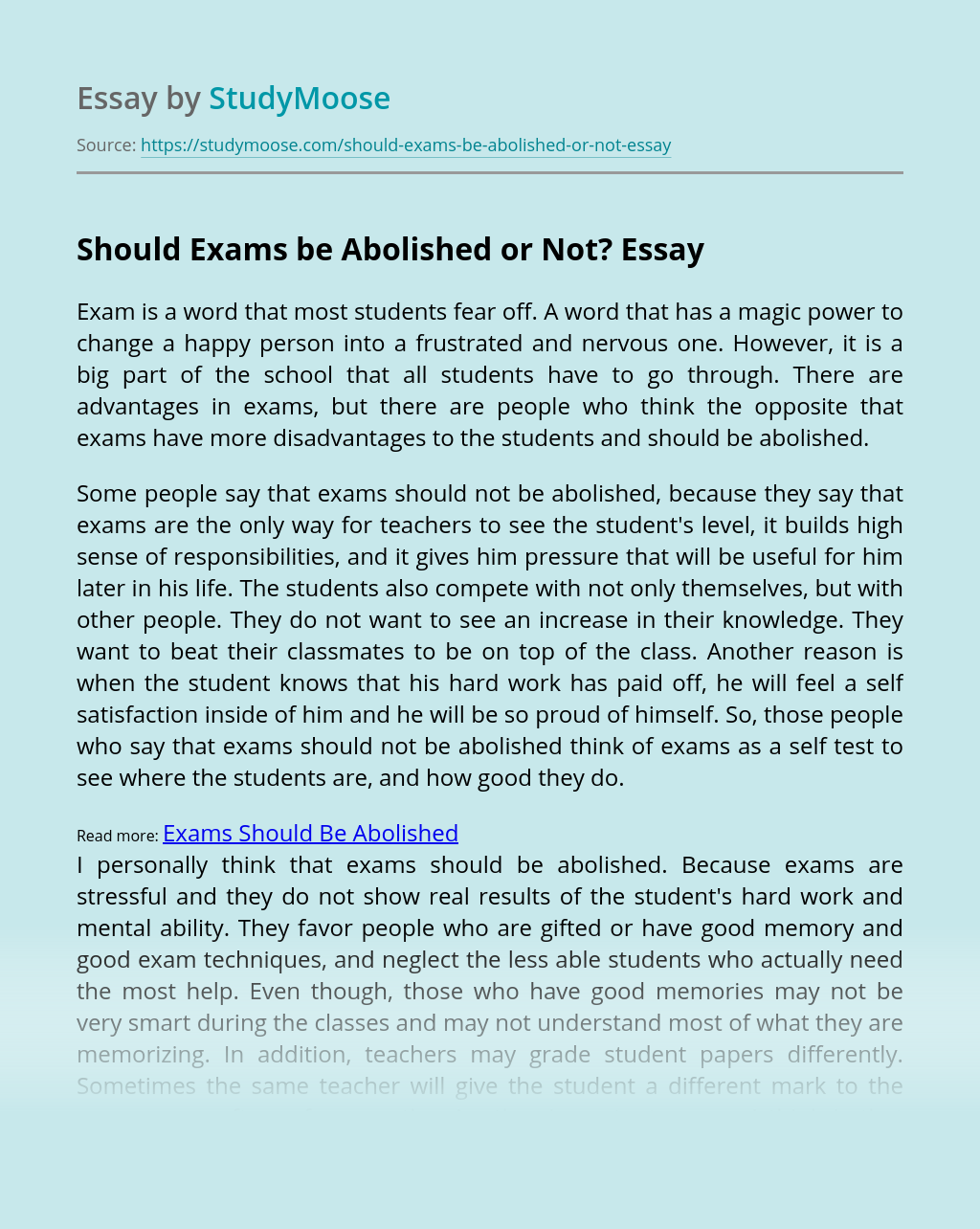 Forms Teach Us Nothing About The Physical World

View sample
Criticisms of Plato's Theory of the Forms

Plato’s theory of forms, also called his theory of ideas, states that there is another world, separate from the material world that we live in called the “eternal world of forms”. This world, to Plato, is more real than the one we live in. His theory is shown in his Allegory of the Cave (from...

The Republic is one of Plato’s longer works (more than 450 pages in length). It is written in dialogue form (as are most of Plato’s books), & it addresses major issues in almost all of the branches of philosophy. The central theme in the book seems to be the nature of justice, a topic in...

Though considered one of the founders of theology, specifically in terms of Christianity, it is also widely accepted that St. Augustine played a large role in philosophy as well. In being familiar with total skepticism, the idea that nothing can be known, Augustine advised that this thought could be disproven in at least three distinct...