"A Hanging" by George Orwell

Higher Question – Choose an essay or a piece of journalism which has made an impact on you because of its effective style. Discuss how the writer’s style adds to the impact of the content.

“A Hanging” by George Orwell is an influential, autobiographical essay, in which the subject of capital punishment is powerfully examined. The essay is based on a prisoner’s execution in a Prisoner of War camp in Burma during the Second World War. In the essay, Orwell is a prison guard for the camp and carefully illustrates his views on capital punishment.

Don't use plagiarized sources.
Get Your Custom Essay on “A Hanging” by George Orwell Just from $13,9/Page

The structure of the essay is of three distinct sections. These sections provide the reader with contrast and repetition, and are grounded in reality but with emphasis on the creative, strengthening Orwell’s key message – that capital punishment is wrong – and evoking sadness and a sense of depression within the reader at how utterly powerless Orwell is at changing the events that occur. Ingenious use of contrast and repetition permits the reader to see vividly that Orwell is deeply angered at the execution he is forced to witness, but he alone can do nothing to change the events, that due to an absurd political system, unfold and lead to the death of a man.

Orwell clearly sets out to engage us in the real in the opening of the essay, but to sustain this engagement must rely on synthesis of the creative description of the prison yard, which is of a passive, oppressive tone to introduce his theme that capital punishment is wrong and he alone cannot stop it. “a sodden morning of the rains”

This illustrates that Orwell feels depressed about his current situation, as “sodden” suggests something which is heavily soaked through with water, is heavily saturated and weighs a considerable amount – much like his heart, heavy with feeling and emotion. “a sickly light, like yellow tinfoil”

The simile in this example depicts his anxiety and uneasiness towards the inevitable hanging. “sickly” implies that Orwell feels physically sick about the prospect of taking a man’s life, and sincerely wishes to stop the hanging, but cannot as he alone is far too weak. The reader feels immediately and undeniably sympathetic for Orwell as his strong feeling of entrapment is made explicitly obvious.

As we progress through the essay, Orwell’s creative style becomes even more apparent through his contrasting tone when he has an epiphany that the hanging is wrong. In this section of the essay, a dog has come running into the prison yard, and is very excitable, while the prisoner and the guards are standing, waiting. “it made a dash for the prisoner, and jumping up tried to lick his face” This indicates the change in tone, as the prisoner is seen by Orwell as an actual human being, after he dehumanises the prisoner throughout the essay until this point.

That the dog is a symbol of the life the prisoner is about to lose, all the freedom the prisoner once had has flitted, leaving no trace of its presence. “he stepped slightly aside to avoid a puddle on the path” The epiphany that Orwell has here forcibly portrays the feeling of realisation by Orwell. Orwell now fully recognises the prisoner to be just the same as him, with his own thoughts, feelings and emotions, just like the rest of us. This makes the reader also realise the horrors of war and how it affects everyone, not just the enemy.

As we reach the end of the essay, Orwell’s clever message of being trapped by a system is made equivocally clear through his literary techniques of repetition and a cyclical structure as the man is hanged but the description, whilst followed by an anecdotal tale, is not heavily factual. Orwell once again reminds us of the description of the setting of the prison yard; “condemned cells”

The repetition of setting description highlights that the process of hanging more prisoners will repeat itself, that ending one life leads to another, and another; is a cyclical process. This suggests that the other guards are not phased by killing another human being at all; “the dead man was a hundred yards away…”

Orwell goes on to show that although he has drank, eaten and laughed with the other guards, he has not forgotten the life that has just been lost before him. the very last sentence of the essay is a very powerful one; it tells us that Orwell is struggling to cope as the other guards do and definitely shows that he feels very strongly indeed against the political system of the time.

In conclusion, “A Hanging” by George Orwell is an autobiographical essay, split into three distinct sections, each with an underlying persuasive duty. The essay persuades the reader that capital punishment is wrong, through Orwell’s creative use of literary techniques which are ultimately grounded in reality; the contrasting tones of the essay and repetition throughout also contribute to this captivating piece. The impact on the reader is highly impressive, and his key message is revealed increasingly throughout the essay. This is an extremely influential piece that will undoubtedly stay with the reader much longer than it takes to read.

“A Hanging” by George Orwell. (2016, Dec 10). Retrieved from https://studymoose.com/a-hanging-by-george-orwell-essay 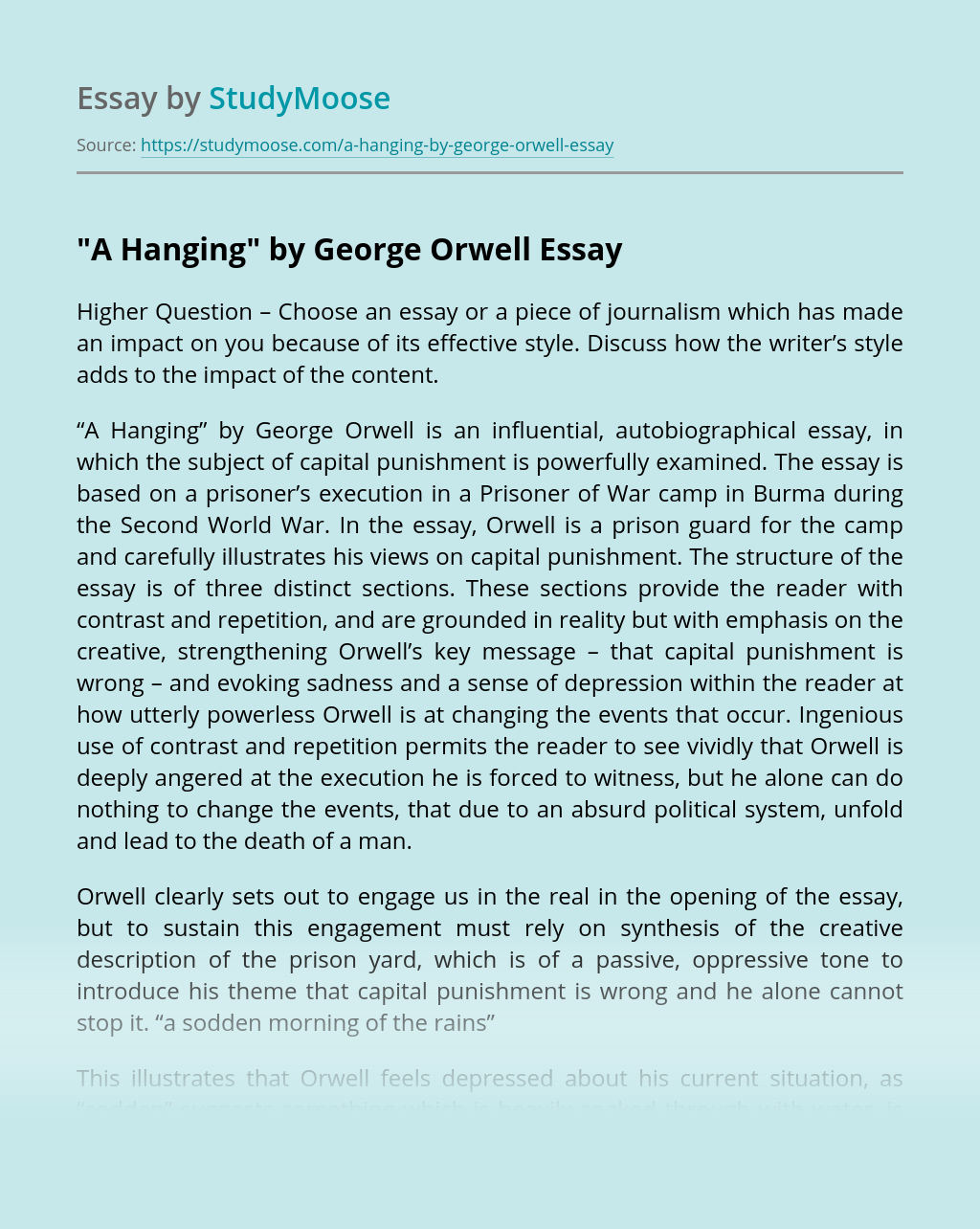 Crazy Eddie was an American retail store chain run by the Antar family, which was established as a private company in 1969 in Brooklyn, New York by businessmen Eddie and Sam M. Antar. The fraud at Crazy Eddie was one of the longest running in modern times, lasting from 1969 to 1987. Crazy Eddie became...

As a physician, a person has to choose between his/her duties – the job you are commanded to do or his moral and what it is the right thing to do. Although, as we all know doctors are supposed to help to preserved life not otherwise. I asked one of my family members who is...

Get Essay
Evolution of Dance

Dancing is an art. It is a creative way for people to express their feelings through movements and rhythm. From the 19th century to the 21st, dancing has evolved from the traditional modern dancing featuring the waltz, to urban dancing including all pop, hip-hop, and freestyle dancing. During the twentieth century in America, dance became...

An essay is a short scholarly synthesis on a solitary theme that introduces the perspectives of the writer. The French author Michel de Montaigne (1533-1592) first introduced the shape in his 1580 book Essais, which gathered his musings on recorded, philosophical, individual, and social issues. The French word “essai,” from which “essay” is determined, actually...

Activities to be completed in this presentation: Carry out a SWOT analysis for Econet Wireless International, identifying the key issues that Econet needs to address from the results of your analysis. Undertake an industry analysis of the African Telecommunications market using Porter’s Five Force Model. Using a competitor analysis framework of your choice, analyse the...