Self-centered Teen or Thought-invoking Speaker : “Hanging Fire” by Audre Lorde The speaker in Audre Lord’s poem “Hanging Fire” is extremely self-centered. Does this limit the poem’s ability to say anything of general value? A simple read of “Hanging Fire” by Audre Lorde might lead one to conclude that there is no real value in this self-centered poem. However, upon critical analysis, one can obtain valuable insights from the poem. The 14-year-old speaker deals with major issues that plague the adolescent generation such as peer acceptance, race and gender inequality, sexuality, death and communication with parents.

Don't use plagiarized sources.
Get Your Custom Essay on Hanging Fire Just from $13,9/Page

In the following paragraphs, I will demonstrate the speaker’s feelings on each of these matters.

One issue that the speaker addresses is the pressure to fit in with her peers. The poem deals with such topics as dancing and upcoming parties (“I have to learn to dance/ In time for the next party”), the importance of fashion (“I have nothing to wear tomorrow”) and physical appearance (“Why do I have to be/ The one/ Wearing braces”).

These are typical topics that cause teenagers to fear failure in terms of social acceptance. The pressure of not fitting into societal norms can oppress these young individuals, both emotionally and socially and the speaker is quite clear in the poem that she is concerned with these issues.

Secondly, the issue of racial and gender inequality is evident in the poem. The speaker appears to be an African American girl. The poem begins with “I am fourteen/ And my skin has betrayed me”. This line could be interpreted in two ways. First, it could indicate that the speaker is dealing with pimples and blemishes, another example of a teenager’s concern about physical appearance. On the other hand, a more interesting interpretation is that the speaker is indicating that she is black. This reference to race indicates the speaker’s awareness that racism has caused and will cause her many frustrations in life. Another line in the poem states that “I should have been on the math team/ My marks were better than his”. The use of this incident is very creative because it deals with two issues: racial inequality and gender inequality.

The speaker feels the unfairness of discrimination because she believes the spot on the math team should have been for her but, instead, was rewarded to the boy due to her gender and the color of her skin. This line provides the reader with an example of the oppression and hardships the speaker is suffering as a black girl in school. The speaker later states in the poem, “There is nothing I want to do/ And too much/ That has to be done”. She recognizes that it will be hard to step forward and join the fight to have society accept equality. In fact, at times the speaker feels the task is too hard and that she does not want to try at all. Her adolescent desire to be accepted in society without ridicule further impedes her efforts to overcome the oppression.

The third issue in the poem is sexuality. In the third line, the speaker states “The boy I cannot live without /Still sucks his thumb / In secret”. It is here that she tells the reader that she is not comfortable expressing her different views about her sexuality. The “boy I cannot live without” refers to the boy inside her and the reader sees that the speaker is aware that her feelings, emotions, and preference to the female sex must remain a secret for fear of scrutiny and non-acceptance. The secret thumb-sucking may refer to her insecurities of being gay. The speaker feels compelled to live a lie to avoid further shunning by her peers and society. The statement in the poem “Suppose I die before graduation/ They will sing sad melodies/ But finally/ Tell the truth about me” describes the unveiling of the truth of the speaker’s secret life upon her death and so reinforces the fact that she is not ready to publicly acknowledge her sexuality.

Another topic in the poem is the communication problem between the speaker and her mother. Each of three stanzas ends with the same two lines: “And momma’s in the bedroom/ With the door closed.” It is obvious that the speaker feels that her mother is unapproachable. The door between the mother and speaker represents the lack of communication flowing between parent and child. The speaker, as a teenager, wishes to exercise her independence but still requires guidance in order to deal with adolescent issues such as social acceptance, racism, gender, sexuality and death. However, the conflict between the teenager’s growing pains and the mother’s reluctance to acknowledge her child’s independence has caused their communication to become obstructed. The speaker feels alone in the world and believes that she has nowhere to turn.

Lastly, the speaker describes her adolescent fascination with death. The speaker refers to death in each of the three stanzas. As a teenager, the speaker is not only feeling overwhelmed by adolescent problems, but is also becoming aware of the future obstacles in life. The speaker sees death as a way of escaping these troubles. Death would allow her communication problems with her mother to disappear, cause her secret about her sexuality to be uncovered and save her from having to fight against societal oppression to accomplish the acceptance of equality. The speaker is seen to contemplate the common, yet unfortunate, adolescent idea of whether death and suicide is a real way to avoid the pressures of life and growing up.

Therefore, if the reader of Audre Lorde’s poem “Hanging Fire” is able to move past the adolescent’s self-pity and into the substance of the poem, the reader is likely to gain an understanding of the serious topics being contemplated by a 14-year-old black girl. In this poem the speaker considers issues such as peer acceptance, racism, gender, sexuality, death and the importance of parental communication. Even the title, in association with the poem, provides value as it communicates to the reader that the speaker wishes to “hang fire” or delay dealing with the many pressures and obstacles in her life. Thus, even though the speaker in this poem is extremely self-centered, it does not limit the poem’s ability to say something of general value. 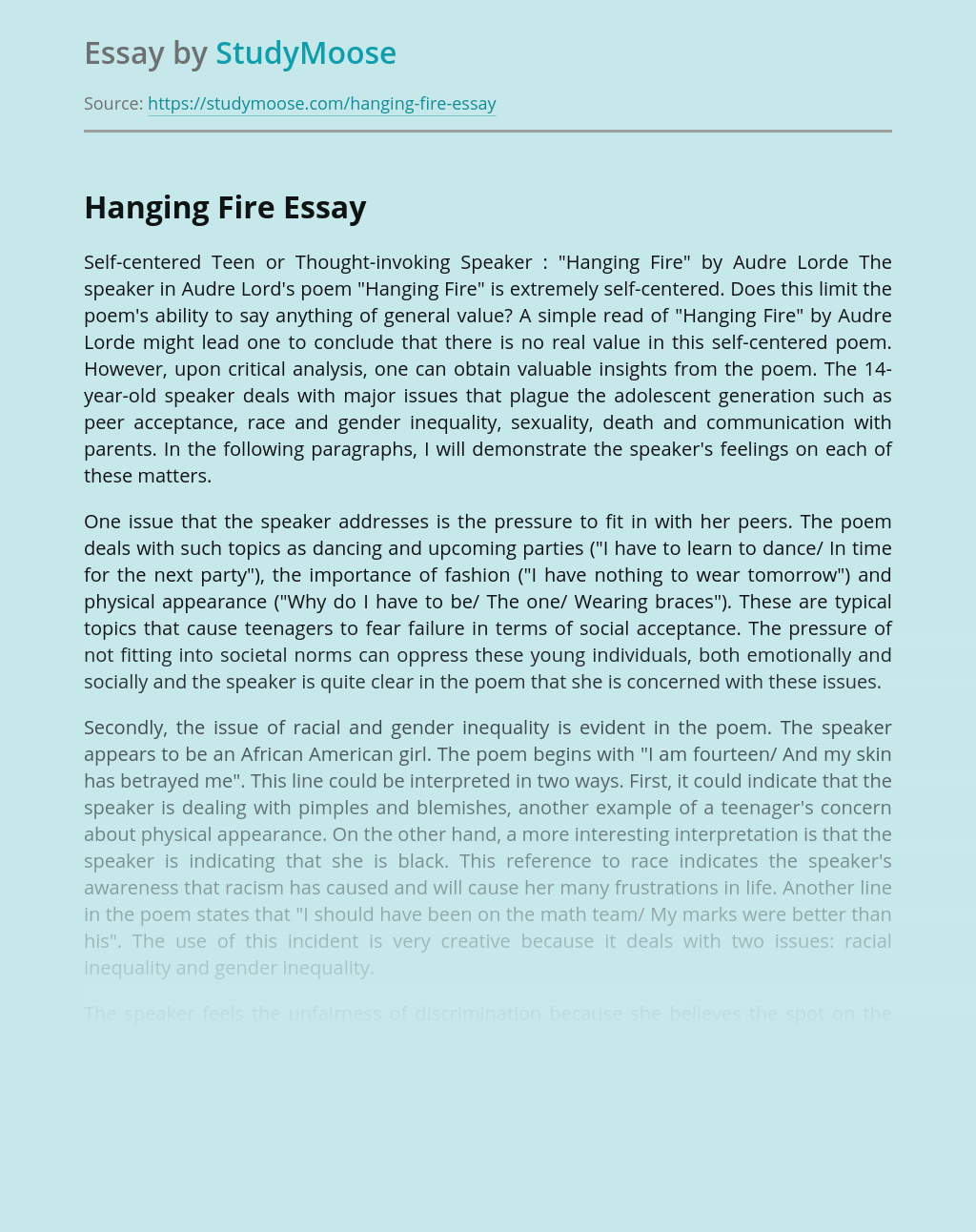 The Merchants of Cool Movie Anaalysis

Rate this post The movie, “The Merchants of Cool”, presented an in-depth look at the relationship between marketing giants and the individuality and “coolness” of teens today. I was surprised by some of the things shown in the movie; not that I was ignorant of the fierce marketing tactics used by companies to sell their...

“Saplings In the Storm” by Mary Pipher

Rate this post In her essay “Saplings In the Storm,” Mary Pipher discusses the changes girls face once they hit adolescence. Through figurative language and tone her essay successfully expresses what the young women go through. In her “Sapplings in the Storm” essay, Mary Pipher brings attention to the struggles, changes, and hardships young girls...

Rate this post Abstract This case study details the developmental milestones of an adolescent girl named Emily. Emily is 12 years old and lives with her mother who is a single parent. According to many theorists and researches, because she is being raised by a single mother, Emily is an at-risk adolescent who may have...

Rate this post Self-concept is a self-description based on how you perceive yourself, with that said the very essence of your emotion is derived from self-concept and as a result from that, self-esteem… which is a self-evaluation that is rooted in your self-concept. Only your beliefs are what influence your emotions, even if that belief...