Adolescent sexual behavior refers to sexual feelings, behavior, and development in adolescents. It is a stage of human sexuality. The sexual behavior of adolescents is influenced by their culture’s norms and mores, their sexual orientation and the issues of social control. Sexuality is a cultural issue. For humans, sex is a matter of cultural meaning and personal choice than biological programming.

Costs and Benefits of Sexual Behavior

Turn in your highest-quality paper
Get a qualified writer to help you with
“ Adolescent Sexual Behavior ”
Get high-quality paper
NEW! AI matching with writer

42% of high school students did not use a condom during their last sexual encounter and 14% engaged in sexual activity with approximately four partners. Reducing adolescent sexual activity and the risk for sexually transmitted diseases is a priority under Healthy People 2010, a set of health objectives for the nation to achieve over the first decade of the new century.

Studies show that there is a link between sexual attitudes and sexual behavior. Attitudes are related to condom use and sexual activity is for both younger and older adolescents. Not surprisingly, high school students reported that positive attitudes toward sex were related to engagement in sexual activity. It was particularly concerning sexual pleasure. Worries about pregnancy and sexually transmitted infections were related to condom use. Theories suggest that attitudes are a key part in the process of making behavioral decisions. The Health Belief Model, a psychological model that attempts to explain and predict health behaviors, is determined by focusing on the attitudes and beliefs of individual.

The Decisional Balance model postulates that behavioral decisions are made by assessing and comparing relative gains or losses associated with behavioral engagement. The factors include: costs for the individual and significant others as well as approval from oneself and significant others. In a study that examined the Costs and Benefits of condom use it was found that the ratings for perceived behavioral costs of protection remained constant over time while perceived benefits of birth control and condom use were associated with behavior change. (Deptula, Shoeny, Slavick, 35)

The primary purpose of the study was to determine which two aspects of attitudes, cost and benefits, predicted parallel and future sexual activity. The effects of costs were equivalent, if not stronger than benefits. The study also suggested that the perception of costs and benefits were both influential in adolescents’ decisions to engage in sexual activity.

Based on the theory of Decisional Balance, it is expected that adolescents who decided to engage in sexual activity would report fewer costs and greater benefits associated with having sex, which is somewhat supported by the study. When the likelihood of intercourse was 50%, the awareness of costs was greater than the awareness of benefits. It appears that although costs still outweigh benefits, adolescents still engage in sexual activity, suggesting that there are other factors that play a role in the decision to have sex. (Deptula, Shoeny, Slavick, 41)

The results of the studies have important suggestions for prevention. The start of sexual activity was predicted by both costs and benefits attitudes. Perception of costs was slightly more influential than benefits in prediction later sexual initiation. It is suggested that both of those dimensions be targeted in order to successfully delay adolescent engagement in sexual activity. In studying the costs, it was revealed that its main focus was on teenage pregnancy. The benefits included social status, personal pleasure and interpersonal connection. The study also revealed that females with high cognitive abilities reports more benefits associated with sex while males with lower cognitive abilities reported fewer costs.

There is certainly a divide between the teenagers of today and generations before them. The divide has to do with what each generation considers to be sex. According to research done by the Centers for Disease Control and Prevention, more than half of 15- to 19-year olds are engaging in oral sex. Adults say that is a form of sex, but teenagers do not see it that way. A 19-year old sophomore in college stated, “For most teens, the only form of sex is penetration, and anything else doesn’t count. You can have oral sex and be a virgin,” while most adults consider oral sex as something that is extremely intimate.

Sarah Brown, director of the National Campaign to Prevent Teen Pregnancy said, “What we’re learning here is that adolescents are redefining what is intimate.” Teenagers view oral sex as something that is quite casual so it doesn’t need to be done while in a relationship. (Jayson, 1) Psychologist David Walsh stated that the brain is wired to develop intense physical and emotional attraction during the teenage years as a part of the maturing process and he is disturbed by the way that the media portrays casual sex because it gives teenagers a false image on true intimacy. (Jayson, 2)

When a parent discovers that their child in engaging in oral sex, they aren’t sure what to think because of the way that teens are so nonchalant about it and parents weren’t usually doing that as teenagers. This could also be due to the fact that many parents do not believe that their child is the one who engages in such things.

The Media’s Influence on Sexual Behavior

The mass media is becoming the easiest way for young people to learn about sexual behavior and see it as well. Perhaps it is so influential because the teenage years are when we develop our own sexual beliefs and behaviors and parents are very reluctant to talk about sexual issues. The average adolescent spends six to seven hours using media ranging from television to books. That number could be higher by now because most adolescents now have televisions, computers, DVD players and some sort of audio system in their rooms and other parts of their homes besides their living rooms.

Much of the media that adolescents are exposed to include sexual imagery but rarely portray consequences of risky sexual encounters or healthy sexual messages. Many health professionals believe that mass media content showing casual sex with no consequences has resulted in a host of negative behaviors among teens who may be persuaded that teen sexual activity is something “everyone” does.(Hart, 4) Although data shows that adolescents use media very frequently, mass media influences are rarely included as important contexts for adolescents’ sexual socialization.

The findings of the study also showed that adolescents who are exposed to more sexual content in their media diets are more likely to engage in sexual intercourse in the near future. The media serves as a “super peer” for adolescents who wish to seek information about sexuality because it is easily accessible. It has also been said that the information that they receive from the media is different from what they learn from other sexual socialization agents such as parents, school and religion.

Media programming rarely shows negative consequences from sexual behavior and depictions of condom and contraception use are very rare, making media users more likely to act the way that they see characters acting because they are seen as realistic and they are not punished for their behavior, making these behaviors convincing to adolescents. (L’Engle, Brown, Kenneavy, 191)

Trends and Estimates of Sexual Activity

Due to the fact that not many teenage relationships are long term, not all sexually experienced teenagers remain sexually active or are consistently sexually active. Those who are consistently sexually active put themselves at risk for pregnancy and contracting an STI each time they have sex or have sex with a new partner. (Terry-Humen, Manlove, Cottingham, 3) Being in a relationship that teenagers view as romantic is associated with a greater likelihood of having sex. Teenagers with older sexual partners are more likely to engage in sexual intercourse than those with similar age partners. Females are more likely to be in a steady relationship when they have sex for the first time. (Terry-Humen, Manlove, Cottingham, 4)

In order to continue with having declines in teen pregnancy and lower the rising rates of STIs, it is suggested that messages of abstinence be reinforced, encourage teenagers to reduce the frequency of sexual activity and partners, educate them about the risks of oral sex, and expand interventions to high-risk populations, such as minority groups. (Terry-Humen, Manlove, Cottingham, 7)

When it comes to predicting later sexual activity, both Costs and Benefits are important, although attitudes concerning the costs were a bit more influential in predicting sexual activity. It is suggested that both Costs and Benefits be included to hinder sexual activity. Due to the way that every different generation was raised, the way in which we define sex is different to everyone. Baby-boomers see oral sex as something that is very intimate while teenagers see oral sex as something that is casual. The way in which some teenagers behave can end up hurting them in the future because they will not know how to have a long-lasting, healthy relationship.

Adolescents who are exposed to sexual content in the media and obtain greater support from the media that is related to sexual behavior have greater intentions to engage in sexual intercourse and other sexual activities. The most obvious ways for teenagers to avoid STIs and unintended teenage pregnancy and childbearing is by delaying sexual initiation or reducing the sexual activity and number of sexual partners as well as improving contraceptive use of those who are sexually active.

In my opinion, I think that it’s great that people are trying to reduce the number of teenage pregnancies and STIs in teenagers. I don’t believe that a person should have to be abstinent until marriage or anything like that and I believe that contraception should be used at all times. It is very alarming that kids are having sex at younger ages. I’m with a lot of teens that say that oral sex is not really sex and I think it is due to the time period I’m growing up in. We’re desensitized to these things.

I think that it’s important for parents to talk to their kids about sex, even though we probably know more than they think. Many kids I know, as well as myself, surprise our parents with how much we know about sex already because things were different when they were younger. Everything was more hush, hush then. The media is definitely a huge influence on the way that we live our lives today because sex is everywhere and it’s what sells. 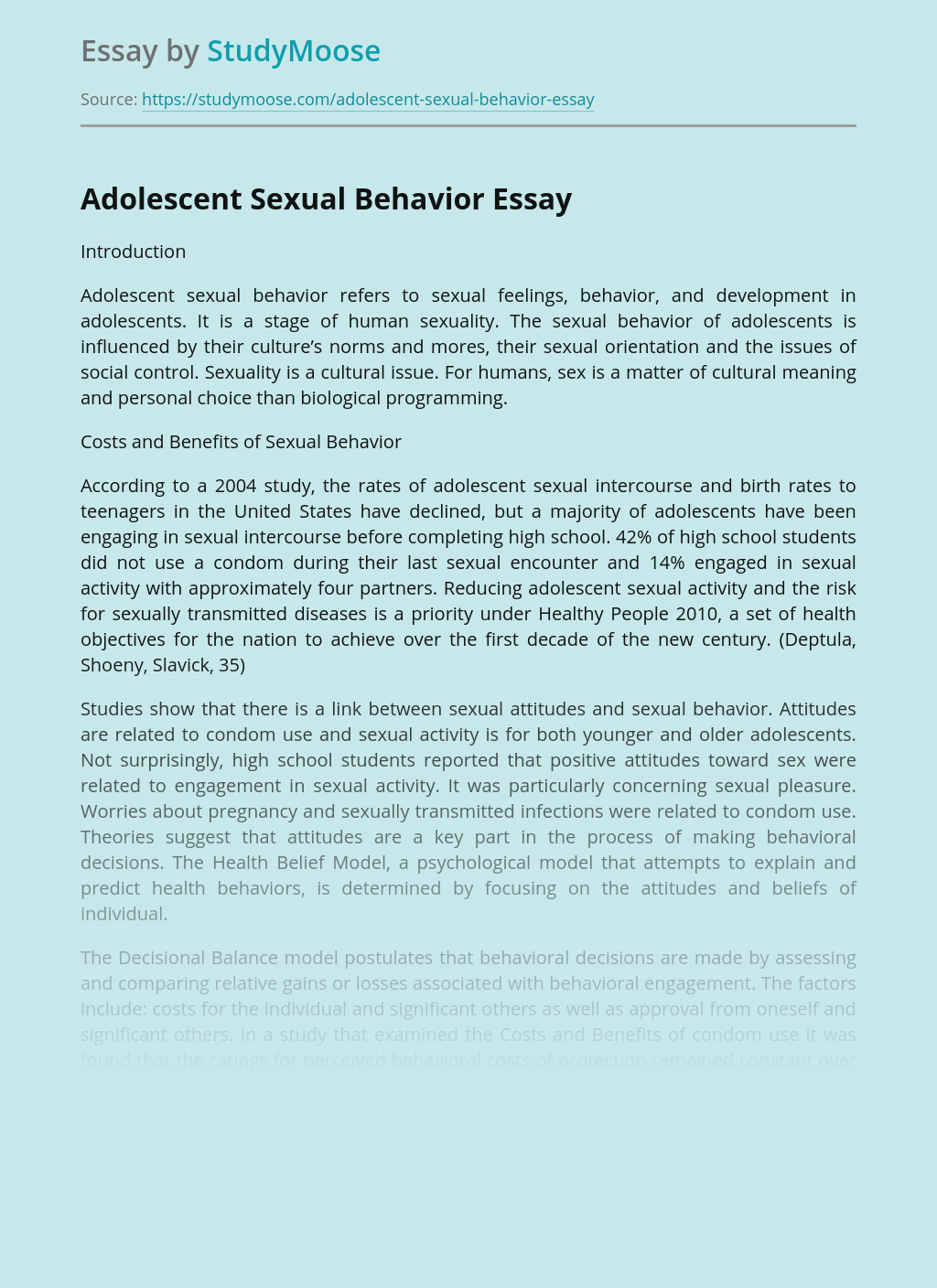 Turn in your highest-quality paper
Get a qualified writer to help you with
“ Adolescent Sexual Behavior ”
Get high-quality paper
Helping students since 2015
Stay Safe, Stay Original