Writing an entire book or short story and coming up with a phrase of five words or less that readers—if they were interested enough to notice said words—could hang In Heart of Darkness, Conrad drops “the horror, the horror” like a bomb, sending a shockwave of realization through both pages past and pages yet to come.their hats on for gleaning a holistic understanding of an entire text is no small achievement, yet Joseph Conrad in Heart of Darkness and Arunhati Roy in The God of Small Things have each done just that.

Don't use plagiarized sources. Get your custom essay on
“ The Use of Hat-Hanging Phrases in Joseph Conrad’s Heart of Darkness and Arunhati Roy’s The God of Small Things ”
Get custom paper
NEW! smart matching with writer

In The God of Small Things, Roy offers an “Aha!” moment in the form of a new name for an already-known character in her novel, calling that character, “the god of small things.” Both Conrad’s novella and Roy’s novel carry these hat-hanging phrases respectively as the central themes of their works; each of them uses their short phrase as the foundation from which everything else in their work is constructed, and upon which the preconceived notions of society are utterly destroyed.

In Heart of Darkness, Conrad reveals with four simple words the cause of that sickening feeling that rises in readers as his novella progresses—the horrifying darkness of the human soul unbound. When Kurtz exclaims his last words, “The horror, the horror!” he has just realized the extent of his own darkness, which at that point in the text has already become quite evident. While this moment is primarily one of self-realization for Kurtz, for those following the story it is a moment of total enlightenment if read critically.

It is at this point in the story that Conrad offers a moment of clarity—a moment when one finally realizes why he has grown increasingly uneasy as the story has progressed—because in it the true nature of the Heart of Darkness is revealed, and that nature is one of great horror. It is not only the sudden realization of the horror of the darkness within Kurtz that creates this shockwave of understanding, but the realization of the fact that Kurtz was most certainly not the only man with a dark heart, the realization that, in fact, all men have this darkness within them. Thus the societal notion that men can be inherently good is torn apart. Despite the horrifying nature of this darkness, the knowledge of its existence gives men the power to fight it, just as Marlow chose to do. It is only once the edge of the cliff is seen that one can make the conscious decision not to walk over the edge and into the abyss.

Taking a closer look at the way Conrad goes about creating this effect, the repetition of “the horror” shows itself to be quite significant. There is an initial exclamation of the words, and then a repetition that serves as a crescendo, raising the drama of Kurtz’s last words into a full blown shout, a shout that reverberates throughout the text. The point Conrad is trying to convey through Heart of Darkness is that all men have darkness in their hearts, and the entire plot line of the story is based on revealing “the horror, the horror” of what happens when a man lets his darkness overtake him. Through Marlow, Conrad shows that men do have the power to choose whether or not they will let the darkness of their hearts rule them, that is, as long as they are made to realize the presence of that darkness. Kurtz’s realization carries tremendous importance because without this self-realization of the horror of the darkness of one’s own heart, one will not be able to choose to fight the darkness and will instead fall prey to it.

In The God of Small Things, Roy uses a somewhat similar technique to bring about the important realization of what her novel is really about. When Roy first refers to the Untouchable Velutha as “the god of small things,” she suddenly reveals the fact that her novel—if not life itself—is really about what she calls the “Small Things.” Since Velutha is “the god of small things,” he is only concerned with the Small Things in life and doesn’t care in the least bit about the “Big Things” like being of the right caste, being of an honorable family, or even being politically influential. The Small Things, the things that are seen as minutia, things like the leaf shaped birthmark on Velutha’s back, or Rahel’s Fountain in a Love-In-Tokyo, or even Pappachi’s moth—these are the things that can free one from losing one’s self in the Big Things. The word “god” shows that Velutha is not among those mastered by Big Things, because he is the master of Small Things. The importance of these five words goes far beyond their being the title of the novel itself; the fact that there is a “god of small things” means that humanity can have a master other than the “Big Things.”

Like Conrad, Roy is able to make this short phrase all-encompassing to her story because she uses it as her foundation; her entire plot is based on revealing the true importance of the Small Things. In fact, the entire novel is filled with Small Things—from small details to small children. The fact that two young children, Rahel and Estha, are the main characters of the novel points to the importance of Small Things throughout. Small children haven’t a care in the world for Big Things; Small Things are their only concern. Using “the god of small things,” Roy essentially shatters the societal notion that Big Things are most important in life, which is what everyone in the novel besides Velutha and the children believed.

Conrad and Roy both build the foundations and structures of their stories upon their respective hat-hanging phrases, and as a result, each one of these phrases becomes all encompassing to its own story. The revelations that each phrase provides serve as keys with which to unlock much deeper meaning in the context of their own stories, and without which said meaning would be hopelessly lost.

The Use of Hat-Hanging Phrases in Joseph Conrad's Heart of Darkness and Arunhati Roy's The God of Small Things. (2021, Sep 21). Retrieved from https://studymoose.com/the-use-of-hat-hanging-phrases-in-joseph-conrad-s-heart-of-darkness-and-arunhati-roy-s-the-god-of-small-things-essay 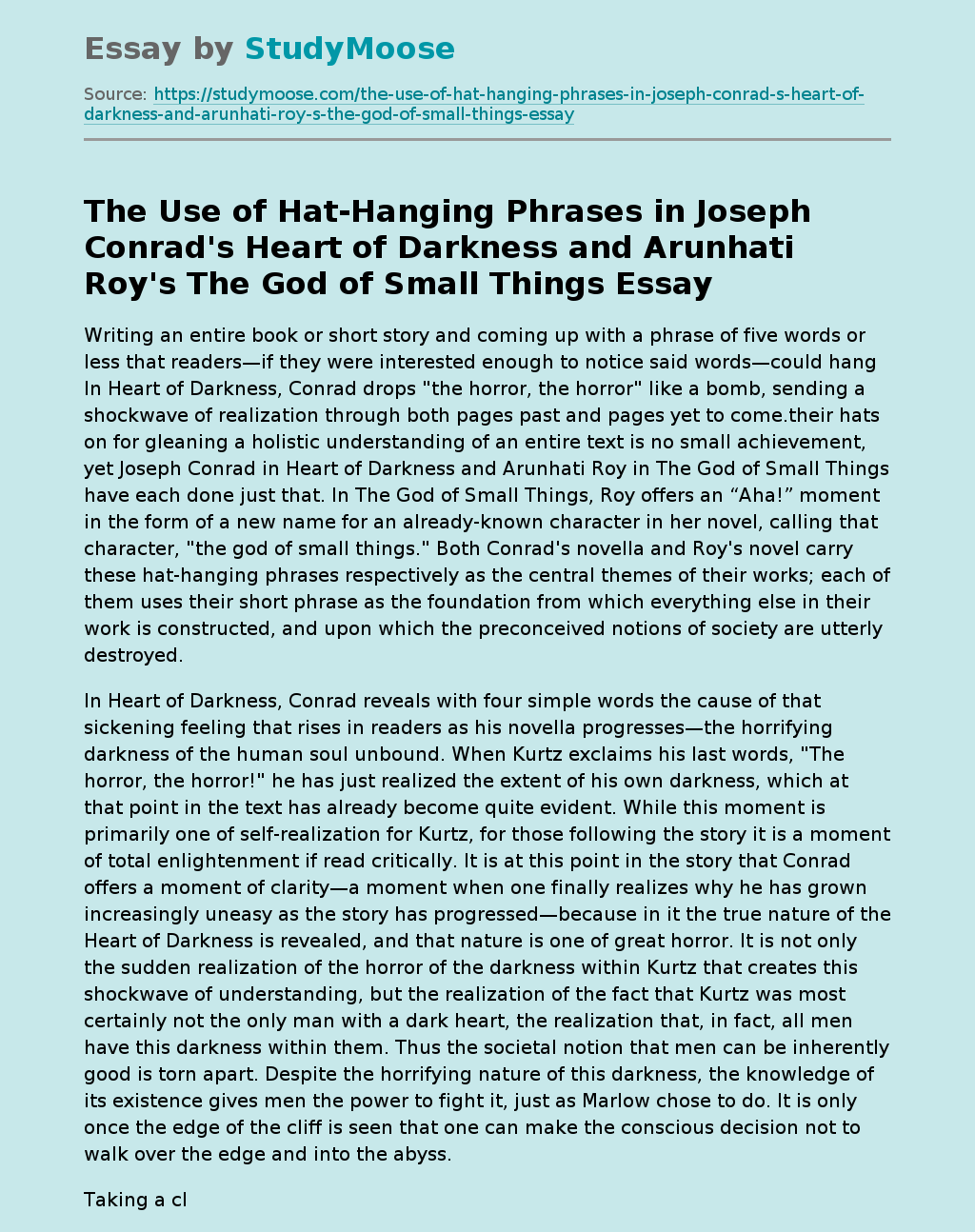