Pros and cons of the Death Penalty

Capital Punishment, legal infliction of death as a penalty for violating criminal law. Methods of execution have included such practices as crucifixion, stoning, drowning, burning at the stake, impaling, and beheading. Today capital punishment is typically accomplished by lethal gas or injection, electrocution, hanging, or shooting.

The death penalty is the most controversial penal practice in the modern world.

The United States stands apart from the general trends on capital punishment. It is the only Western industrialized nation where executions still take place.

Turn in your highest-quality paper
Get a qualified writer to help you with
“ Pros and cons of the Death Penalty ”
Get high-quality paper
NEW! AI matching with writer

Furthermore, it is the only nation that combines frequent executions with a highly developed legal system characterized by respect for individual rights.

Some of the pros and cons are as follows in argumentative essays:

A punishment is just if it recognizes the seriousness of the crime. “Let the punishment fit the crime” is a generally accepted and sound precept. In structuring criminal sentences, society must determine what punishment fits the premeditated taking of innocent human life.

To be proportionate to the offense of cold-blooded murder, the penalty for such an offense must acknowledge the inviolability of human life. Without a death penalty, the criminal law’s penalties will essentially “top out” and will not differentiate murder from other offenses. Only if the sentencing structure allows for a substantially greater penalty for murder will the range of penalties fully reflect the seriousness of ending the life of an innocent human being.

Deterrence- The death penalty is also justified because of its deterrent effect, which saves the lives of innocent persons by discouraging potential murderers.

Logic supports the conclusion that capital punishment is the most effective deterrent for premeditated murders. A capital sentence is certainly a more feared penalty than a prison term. The lengths to which convicted murderers go to avoid imposition of this sentence clearly demonstrates this fact, as do interviews with prison inmates.

To be sure, the death penalty does not deter all murders. But because a capital sentence is more severe than other penalties, it is reasonable to assume that its existence will lead at least some potential murderers to decide against risking execution. As the Supreme Court has observed, “There are carefully contemplated murders, such as the murder for hire, where the possible penalty of death may well enter into the cold calculus that precedes the decision to act.”

Incapacitation- Capital punishment also serves to effectively prevent murderers from killing again. This incapacitation effect is particularly important because of the continuing risk posed by those who have already taken a human life. For example, according to data from the Bureau of Justice Statistics, of 52,000 state prison inmates serving time for murder in 1984, an estimated 810 had previously been convicted of murder. Had some of these murderers been given the death penalty for their first murders, innocent people would have been spared. . Only a capital sentence can permanently end the threat to others posed by the most serious murderers.

The death penalty gives closure to the victim’s families who have suffered so much.

It provides a punishment and deterrent for someone who’s already sentenced to life in prison.

Prisoner parole or escapes can give criminals another chance to kill.

Cons- Risk to the Innocent- The risk that an innocent person might be executed, Unlike all other criminal punishments, the death penalty is irrevocable,(IRREVERSIBLE)

A murder trial normally takes much longer when the death penalty is at issue than when it is not. Litigation costs – including the time of judges, prosecutors, public defenders, and court reporters, and the high costs of briefs – are mostly borne by the taxpayer. A 1982 study showed that were the death penalty to be reintroduced in New York, the cost of the capital trial alone would be more than double the cost of a life term in prison.

It is barbaric and violates the “cruel and unusual” clause in the Bill of Rights,some people believe.

We as a society have to move away from the “eye for an eye” revenge mentality if civilization is to advance.

Some jury members are reluctant to convict if it means putting someone to death.

The prisoner’s family must suffer from seeing their loved one put to death by the state.

It is useless in that it doesn’t bring the victim back to life.

The death penalty is racially biased against African Americans

Statistical evidence conducted on cases of similar crimes found that African American defendants are over four times as likely to be executed as their White counterparts. A similar study noted that White defendants face almost no chance of execution when their victim is African-American. While African Americans make up only 13% of the U.S. population, over 40% of death-row inmates are African-American. In light of these gross inequalities, the continuation of capital punishment constitutes egregious discrimination. it is also true that those on death row come disproportionately from low-income and high-crime geographic areas. That such areas are disproportionately populated by African Americans is a tragic correlation, painting a troubling portrait of a nation that lacks equality.

Mistakes can be made, Advances in forensic medicine and DNA testing are leading to more and more exoneration’s of convicted criminals.

Pros and cons of the Death Penalty. (2016, Jun 25). Retrieved from https://studymoose.com/pros-and-cons-of-the-death-penalty-essay 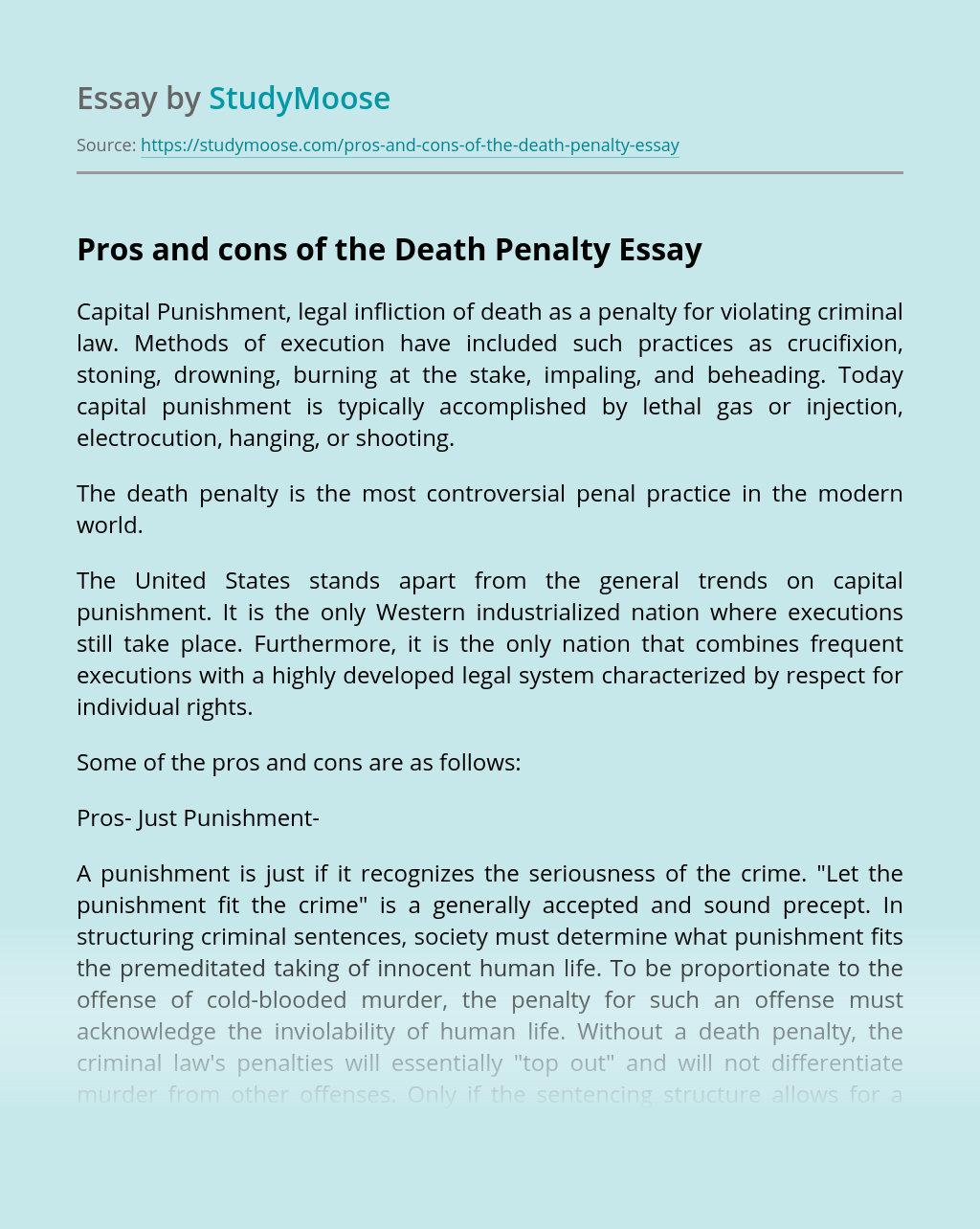 Turn in your highest-quality paper
Get a qualified writer to help you with
“ Pros and cons of the Death Penalty ”
Get high-quality paper
Helping students since 2015
Stay Safe, Stay Original