Populism and the Jacksonian Democrats

Question: In what ways were the late nineteenth-century Populists the heirs of the Jacksonian-Democrats with respect to overall objectives and specific proposals for reform?

The Populists of the late nineteenth-century were in many aspects the heirs of the Jacksonian Democrats, carrying on the legacy and tradition left behind. The Populists were very similar to the Jacksonians in many of their overall objectives and specific reform proposals.

During the Jacksonian Era from about 1828-1842, the Democrats set the standard to be carried on later by the Populists.

Turn in your highest-quality paper
Get a qualified writer to help you with
“ Populism and the Jacksonian Democrats ”
Get high-quality paper
NEW! AI matching with writers

The Jacksonian Democrats identified with the common man. They wanted all democrats to agree. In 1828, Andrew Jackson was elected president and he was later reelected in 1832. In the year of his reelection, Jackson established the spoils system to reform the government, removing some federal officeholders (“To the victor belong the spoils”) and made the right of elected officials to appoint their own followers to public office and established feature of American politics. Also in this year, Jackson vetoed the bill to recharter the Bank of the United States.

This sets the tone for his, and the Democrats, ongoing battle with the Bank and its president, Nicholas Biddle, later to rise to climax when Jackson removed federal deposits from the Bank of the United States.

Jackson believed in a distinct, but simple theory of democracy, that it should offer “equal protection and equal benefits” to all its white male citizens and favor no region of class over another. This meant an assault on what he considered the citadels of the eastern aristocracy and an effort to extend opportunities to the rising classes of the west and south. It also meant a firm commitment to the continuing subjugation of African Americans and Indians, keeping these “dangerous” elements from the politic body to keep the white-male democracy they valued in preservation.

Carrying on the Jacksonian legacy, the Populists were mostly farmers and industrial workers; they were the common man. They believed that wealth belonged to the working class, those who create the wealth, not the owners and a graduated income tax (as the income goes up, the tax rate goes up, so wealthier people pay more taxes than the poor). The Populists were champions of the workingman, pushing for better work conditions and a shorter workweek, as well as putting more money in the hands of the workers. One of the biggest reform proposals of the populists was bimetallism and free coinage of silver. Free coinage of silver would have increased the supply of money since silver was in easy circulation. An increase in the supply of money would generally lead to inflation unless the supply of goods and services by at least as much. As did many industrial workers fearing for their jobs, the Populists wanted to limit immigration.

In carrying on the legacy left by the Jacksonian Democrats, the Populists exhibited many of the same ideas and proposals. The election of Andrew Jackson to the presidency in 1828 marked not only the triumph of a particular vision of government and democracy, it represented the emergence of a new political world. The Populists emergence in 1873 represented the emergence of a new political world as well. The Jacksonians may have represented and identified with the common man, but the Populists were the common man. During both eras, a main reform movement of each was to upset the eastern powers; Jackson was to defeat the stranglehold of the aristocratic east on the nation’s economic life; the Populists were set to defeat the stranglehold of the industrial east on the nation’s economic life. Both parties were champions of the common man, although it was the Populists championing themselves. The legacy and tradition left behind by the Jacksonian Democrats was aptly picked up by the Populists of the nineteenth-century.

Populism and the Jacksonian Democrats. (2016, Jul 09). Retrieved from http://studymoose.com/populism-and-the-jacksonian-democrats-essay 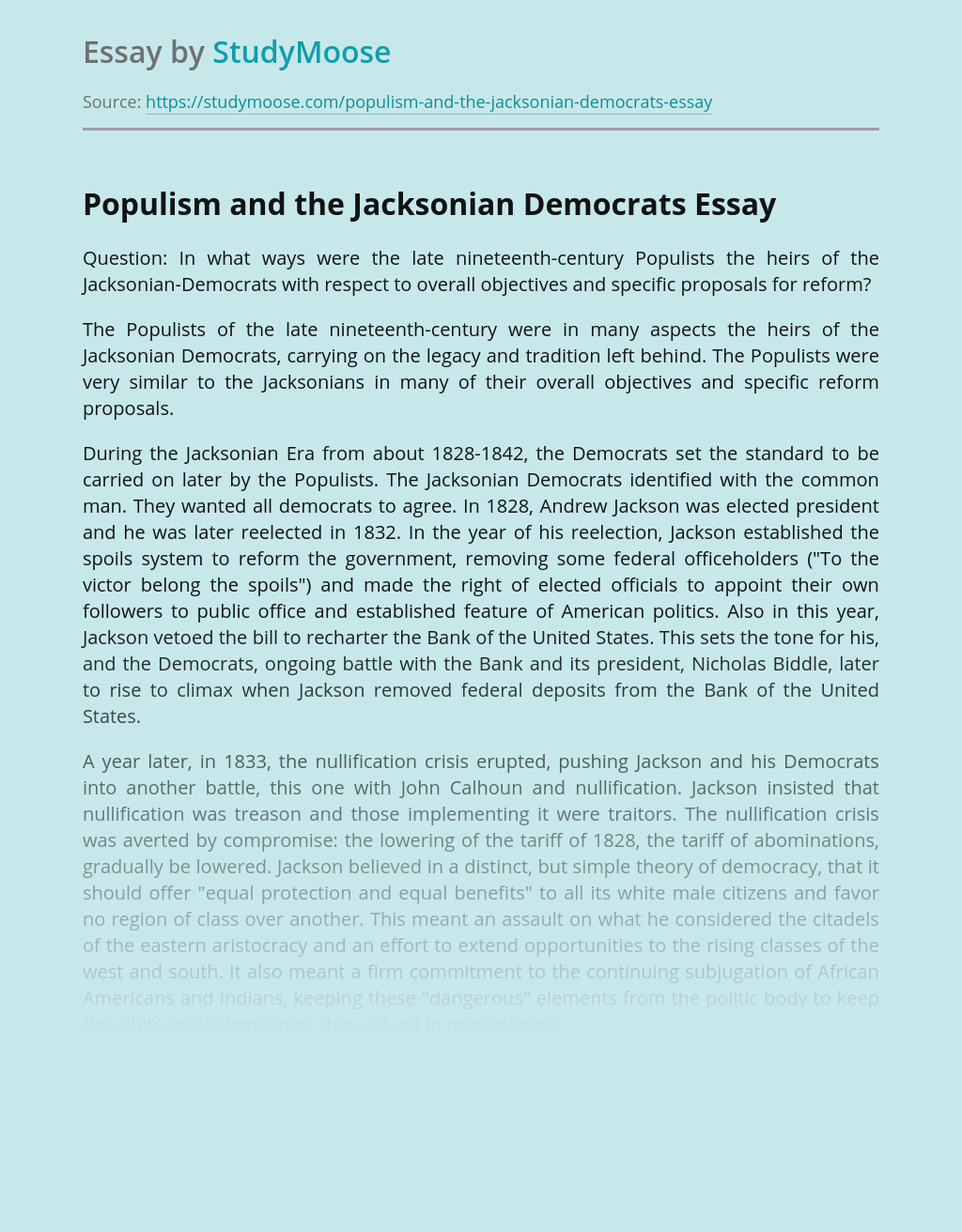 Turn in your highest-quality paper
Get a qualified writer to help you with
“ Populism and the Jacksonian Democrats ”
Get high-quality paper
Helping students since 2015
Stay Safe, Stay Original