Historical and Cultural Stance in The Necklace

Guy de Maupassant’s short story The Necklace is famous in its own way of revealing and illustrating the historical context and situation of women in the 19th century. The author reveals the behavior and restraints of women as they struggle to identify themselves in a male dominated society. This theme can also be observed in the story of The Yellow Wallpaper written by Charlotte Perkins Gilman wherein she uncovers the mental and emotional effects of male dominance and social pressure to women.

Don't use plagiarized sources. Get your custom essay on
“ Historical and Cultural Stance in The Necklace ”
Get custom paper
NEW! smart matching with writer

Gilman’s work is comparable to de Maupassant’s piece as it both discusses the pressures that the society brings to women. In The Necklace, social status becomes the primary instigator of misery in the character of Madame Loisel while in The Yellow Wallpaper; it is the entire domination and ascendancy of men that causes the mental instability of the narrator. Women restrictions, male dominance, and social class are only several of the thematic elements in The Necklace which makes it a socially awakening piece.

Proficient in: The Necklace

These elements are further supported with a comparative analysis of Charlotte Perkins Gilman’s The Yellow Wallpaper. Historical and Cultural Stance in The Necklace in Relation to The Yellow Wallpaper There are undeniable comparisons in the story of Guy de Maupassant’s The Necklace and Charlotte Perkins Gilman’s The Yellow Wallpaper when it comes to the theme of feminism and social structure of the 19th century. Since both stories were published in the late 1800s, it focused more on the social structure of the 19th century when women were unfortunately treated as lesser creatures than men.

In the story of The Necklace, Madame Loisel, a beautiful and ambitious young woman is invited in the ministry’s ball with her husband. However, Madame Loisel becomes hesitant because she knows that many significant and rich people in the society will be present. She and her husband are not in any way, rich. In the introductory part of the story, the author describes her as “one of those pretty and charming girls born, as though fate had blundered over her, into a family of artisans” (de Maupassant).

De Maupassant already provides historical and cultural background in the first paragraph of the story as he literally describes the role of women in the 19th century France. He discusses how Madame Loisel feels miserable with her poor situation society “for women have no caste or class, their beauty, grace, and charm serving them for birth or family” (de Maupassant). This description of women in the story reveals their limited role in the society, thus, presenting the concept of women’s restrictions in the society.

De Maupassant further solidifies this reality by adding how “their natural delicacy, their instinctive elegance, their nimbleness of wit, are their only mark of rank” (de Maupassant). This concept of restriction of women is quite comparable with the description of Charlotte Perkins Gilman in her story, The Yellow Wallpaper. It is a story about the wickedness of confinement. In the story, the narrator’s husband locked her inside the room with the yellow wallpaper because he believed that she would be cured of her post-partum depression due to recently giving birth.

He thought he could cure her by means of rest cure treatment. In result, the wife resorts and depends on the images that the yellow wallpaper provides her. She begins to see images crawling and creeping inside it and starts hallucinating, thus, worsening the mental state of the wife. The story is an entire symbolism of women being manipulated fully by men. The husband’s way of taking charge of his wife’s mental health signifies the concept of male domination in the story.

“If a physician of high standing, and one’s own husband, assures friends and relatives that there is really nothing the matter with one but temporary nervous depression—a slight hysterical tendency—what is one to do? ” (Gilman). The narrator’s question reveals the powerlessness of a woman in her society if a “physician of higher standing” whom she refers as a man has already made a conclusion and solution against her will. In a thorough analysis, the husband symbolizes the patriarchal ascendancy that restricts women’s lives.

They are expected to always follow and obey their husbands and fathers as they are believed to know the best for everyone. The husband’s act of confining her represents male dominance in the society. The woman behind the wallpaper is the narrator herself. Being confined alone in the room only provides herself as the only company that she has. The wallpaper becomes the mirror of the narrator’s situation as she sees her situation and the situation of other women struggling free from the “cage” which has already formed in the patterns of the wallpaper.

In this regard, similar to De Maupassant, Gilman wishes to symbolize the confinement to the current situation of women of the 19th century who are locked up in their role as merely wives and mothers. They are exclusive to domestic purposes only without any right to identify themselves as individual people. The story wishes to open people’s mind in the dangers of restricting women not only literally but also in the sociological and mental aspect.

It aims to convey that this confinement can risk a person’s mental and physical health as portrayed by the psychosis brought about in the narrator’s mind as she struggles inside the room with the yellow wallpaper. In the case of The Necklace’s Madame Loisel, unlike the narrator in The Yellow Wallpaper, she is mentally stable however; it can be considered that she becomes disillusioned by her own ambitiousness. She becomes too obsessed with the idea of fitting in the social circle that she goes as far as buying an expensive dress and borrowing a diamond necklace to attract the high-class people in the ministry’s ball.

She danced madly, ecstatically, drunk with pleasure, with no thought for anything, in the triumph of her beauty, in the pride of her success, in a cloud of happiness made up of this universal homage and admiration, of the desires she had aroused, of the completeness of a victory so dear to her feminine heart. (de Maupassant). Simply put, the narrator and Madame Loisel are two different types of women of the 19th century. They are very different in terms of personality and mental state but their similarity lies within the fact that they are the results of a male dominated and pressure-filled society.

The narrator is constrained to obedience because of her authoritative husband while Madame Loisel is pressured by the high demands of social status. It is clear even today that social status is essential to some ambitious women especially with the French women. Social gatherings are very frequent events where women usually dress up to gain attention and increase their popularity. In Madame Loisel’s situation, she becomes miserable because of her dissatisfaction in life. “She suffered from the poorness of her house, from its mean walls, worn chairs, and ugly curtains.

All these things, of which other women of her class would not even have been aware, tormented and insulted her” (de Maupassant). Gilman, on the other hand, uses imagery and psychoanalysis to express her political idealism about the inequality of marriage where women are always regarded as less capable than men are; therefore, it restricts them of self-expression. The aim to go higher and establish a particular identity is the general conflict of women which is both present in the story of The Necklace and The Yellow Wallpaper.

Conclusion The historical and cultural context of Guy de Maupassant’s The Necklace is further supported by Charlotte Perkins Gilman work. The comparisons are towards the main female characters of the two stories and their struggle to find their identity in their society. The Yellow Wallpaper of Gilman is the perfect complement to brace the historical and cultural context of The Necklace. The fact that both stories are published in the late 1800s is an essential element that solidifies the ideas presented in the texts about women.

Despite the differences between the major characters in the stories, several considerations about other aspects such as their mindsets are comparable in some way. They are both disillusioned by a male dominated society that such a culture and tradition regarding women are to be maintained. Works Cited De Maupassant, Guy. “The Necklace. ” Classic Short Stories. 19 April 2009. <http://www. classicshorts. com/stories/necklace. html> Gilman, Charlotte Perkins. The Yellow Wallpaper. 19 April 2009. <http://www. library. csi. cuny. edu/dept/history/lavender/wallpaper. html>

Historical and Cultural Stance in The Necklace. (2016, Aug 18). Retrieved from https://studymoose.com/historical-and-cultural-stance-in-the-necklace-essay 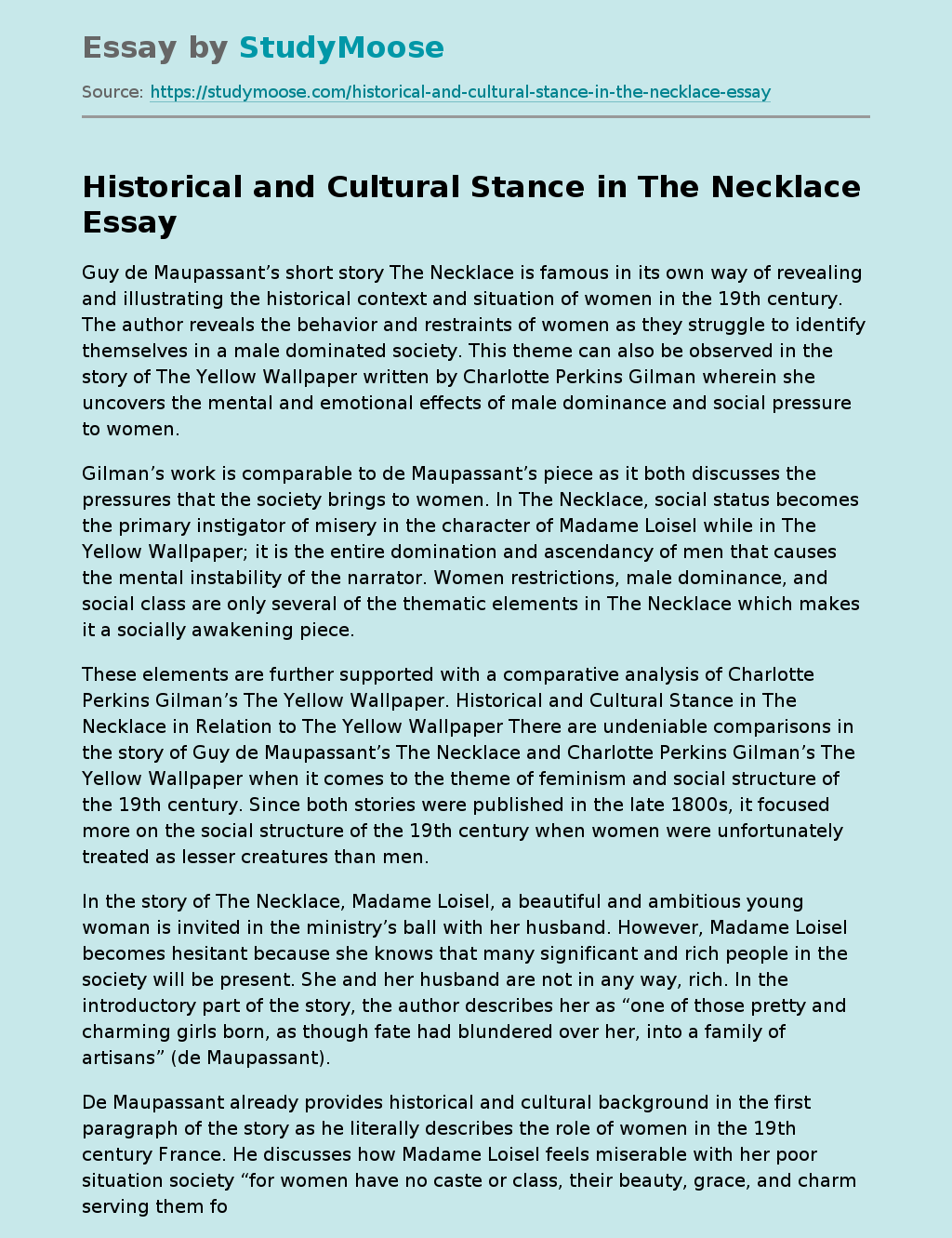