Determining the definition of rhetoric is complicated. How can one describe the use of words with words themselves? In his paper “The Rhetorical Stance,” Wayne Booth describes the perfect balance that a writer can strike in an essay. The rhetorical stance involves equilibrium between the argumentative content of the essay, focus the intended audience, and development of the speaker’s voice. Finding their elusive balance results in “effective communication,” whereas their imbalance makes the writing “mere wasted effort” (Booth 141). Through the study of nonfictional prose, Booth discerned three types of rhetorical imbalances that inhibit effective communication: the pedant’s stance, the advertiser’s stance, and the entertainer’s stance.

Don't use plagiarized sources. Get your custom essay on
“ A Description of the Perfect Balance a Writer Can Write in an Essay in Wayne Booth’s The Rhetorical Stance ”
Get custom paper
NEW! smart matching with writer

Being able to identify the faults in each stance can help to improve one’s critical analysis of their own written work. The pedant’s stance is the first type of unbalanced stance described by Booth, and is categorized by focusing on the content without considering the audience, and therefore the author’s tone (Booth 141).

An example of this type of writing is “Saskatchewan’s Indian People – Five Generations,” a piece written by Pat Deiter-McArthur. In the textbook, this excerpt is prefaced by saying this essay is a written version of a history that is usually shared orally. However, this purpose is not made clear in Deiter-McArthur’s essay. The tone of the essay is very formal and academic, which contradicts the supposed purpose of being a written version of an oral story. According to the Gunning Fog Index, it requires 14.1 years of formal education to be read her essay with ease.

Although Deiter-McArthur is telling the story of the Indian people, she loses sight of the purpose of the paper (to share stories with further generations) by drowning the reader in jargon without providing sufficient explanation for the layman to comprehend. By using terms like “psychologically oppressed” and “assimilation” without elucidation, her essay becomes inaccessible for many people (Deiter-McArthur 380). By considering the intended audience more heavily, Deiter-McArthur’s essay would have been presented more effectively. The second imbalanced stance that Booth describes is the advertiser’s stance, which emphasizes the effect of the piece, while “undervaluing” the content (Booth 143).

Robertson Davies attempts to sell the argument in his essay “The Pleasures of Love” like an advertiser tries to sell his product: he glamourizes the content with extensive allusions and bombastic diction. The first portion of Davies’ essay revolves around Shakespearean allusions. Davies discusses Romeo and Juliet as an example of “youthful passion,” and asks rhetorical questions about hypothetical situations where they both survive the play (Davies 421). However, he forgets to discuss the purpose of these questions, as they seem to be tangential thoughts in his essay. In a more balanced essay, these thoughts could have been excluded, as they were not directly related to the rest of the essay. Davies’ diction regularly includes exaggerations, like pronouncing passion as “splendid” and “noble” (Davies 421), or completing a “reclusive man” with a “gregarious woman” (Davies 422); he often uses three adjectives to describe single subjects. However, in real life, very few things are so extreme and exaggerated, and the extravagant depictions do not feel representative of an actual situation. Furthermore, Davies displays bias by omitting Shakespeare’s less compulsive youth or even any examples of real youth, as these may oppose his point. By attempting to sell his argument with flowery writing and an obvious bias, Davies’ essay does not feel authentic or accurate, and is not as convincing as it could be.

According to Booth, the entertainer’s stance is characterized by the loss of substance in favour of charm, which can lead to “empty colourfulness” (Booth 144). In her essay “I Was a Teenage Hijabi Hockey Player,” Shema Khan describes her experiences as a Muslim woman in Canada. Her tone is colourful and zesty, but her voice is so strong that it steals focus away from the content of the essay. Her essay aims to challenge the stereotypes of hijabi women, but this central theme is hidden under Khan’s own character development. She spends the first part of the essay convincing the reader that she was excited about hockey as a child, however, while it develops her character as the author, it does not develop upon the fact that hijabi women are not “supposed to be interested in sports,” the apparent crux of the essay (Khan 368). If Khan had spent less time discussing the background of her love of hockey and more time discussing how her culture as a “Muslim Canuck” (Khan 369) affected her, it could have been a more rhetorically balanced essay. Booth’s ideally defined rhetorical stance can be viewed in Jerri Cook’s essay, “Confessions of the World’s Worst Parent.”

In this essay, Cook describes an anecdote about a time when she is accused of being a bad parent, then continues to discuss Lenore Skenazy’s book, which details Skenazy’s experiences with being labeled the “World’s Worst Parent.” Cook’s advantage in achieving rhetorical balance in this essay is that it was published in a magazine with a predefined target audience: American parents. To be even more precise in defining her audience, in the final paragraph of her essay she uses the second person to reach out to the reader, asking what kind of parent the reader identifies as. This allows Cook explicitly define her audience, and also engage the reader. The reader can build a personal connection with Cook as the author, as they define whether they are a “free-range” or “helicopter” parent (Cook 427). The ability for the readers to personally connect to Cook’s essay is also enhanced by her tone; it is casual and friendly, and resembles the tone with which two close friends would converse.

For example, in the second paragraph, she uses parentheses to make sarcastic comments like “big gasp here”, making herself sound very colloquial (Cook 425). Cook uses almost child-like diction, describing free-range children as a “no-no”. Based on the Gunning Fog Index, the reader needs only 5.9 years of formal education to read the passage easily, which allows her voice to be highly accessible. Cook’s essay also presents the subject manner in an understandable and manageable way. The narrative portion of her essay lets the content shine, while maintaining her character. What is more impressive is that even in her critical analysis of Skenazy’s book, while using quotations and incorporating statistical figures, she is able to keep her desired tone and audience in mind; she incorporates quick remarks like telling the reader that they do not have to “make [their children] wear a hard hat just in case of [being hit by an asteroid]” (Cook 426) or asking the audience to “take a wild guess” (Cook 427). Jerri Cook is able to exemplify Booth’s sought-after trait of balance in her essay, allowing the reader to be engrossed in, informed by, and, perhaps most importantly, convinced by her writing. Finding rhetorical balance in an essay is a process that involves a lot of practice and concentration. It requires rereading and revision, and very critical analysis of one’s own writing style in order to strike this elusive equilibrium. However, once that balance is struck, there is no telling what one’s writing can accomplish!

A Description of the Perfect Balance a Writer Can Write in an Essay in Wayne Booth's The Rhetorical Stance. (2021, Oct 01). Retrieved from https://studymoose.com/a-description-of-the-perfect-balance-a-writer-can-write-in-an-essay-in-wayne-booth-s-the-rhetorical-stance-essay 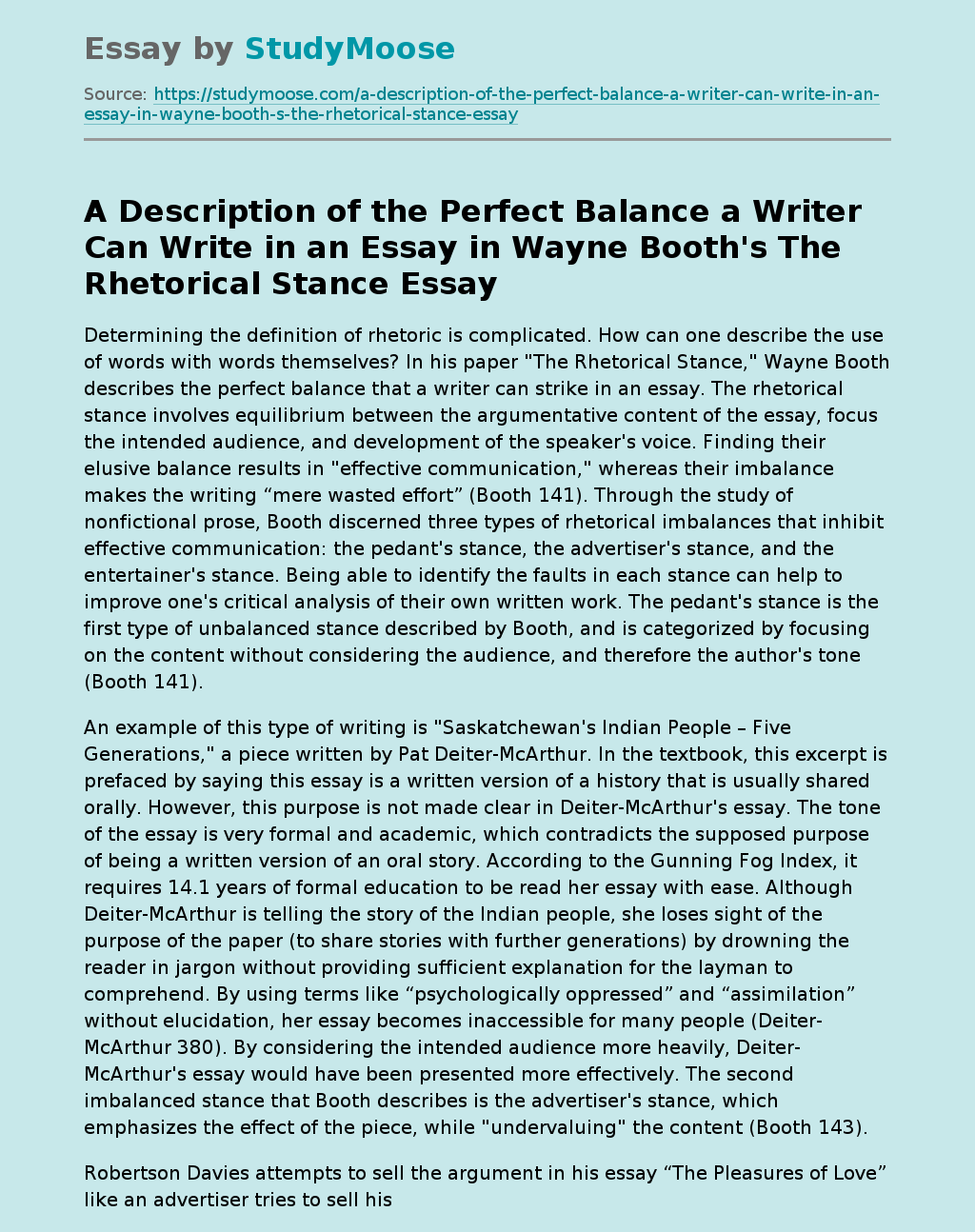