A Critique of Rhetorical Situations and Their Constituents, an Essay by Keith Grant Davies

Everything we write, be it a novel, an essay, a letter, an email, or even a text message, always has a purpose. That purpose typically has an audience it is intending to reach. By reaching I mean touching, persuading, encouraging, or any incitement of any reaction that we human beings can show. When somebody reads a piece of writing, they should be able to articulate who the author is, their thoughts, emotions, beliefs, etc. If the reader is unable to connect with the author, then everything falls apart.

Don't use plagiarized sources. Get your custom essay on
“ A Critique of Rhetorical Situations and Their Constituents, an Essay by Keith Grant Davies ”
Get custom paper
NEW! smart matching with writer

The story becomes a pile of paper with black letters and absolutely no meaning. Not only is the reader uninterested, but chances are, the author wasn’t interested either. To me, I believe that writing is like tango. If both parties aren’t present, then the whole thing goes up in flames.

In part one of this essay I illustrate my understanding of Keith Grant Davie’s essay “Rhetorical Situations and their Constituents.

In “Rhetorical Situations and Their Constituents”, published in the 1997 Rhetoric Review Journal, Keith Grant Davie analyzes the varying intersections of rhetorical discourse and defines many terms that relate to rhetorical situations and their component parts. He seeks to define rhetorical situations outside the constraints of causation, and rather define them as correlations; many moving parts that include “sets of interacting influences from which rhetoric arises, and which rhetoric in turn influences” (264).

This specifically is what Grant Davie perceives to be the most important lesson when teaching writing students, and he directs instructors and mentors in the field of rhetorical discourse to encourage asking why something happened rather than just how something happened. This, consequently, will result in more informed writers who can analyze situations better and who “have a stronger basis for making composing decisions” (264).

So, what? Understanding rhetorical situations is more important than I had initially thought. I admit, before reading Grant Davie’s essay, I didn’t have an inkling to what a rhetorical situation was. I knew what each word meant individually, but I was confused as to how they came together. My first course of action was to google it. The first result that came up was “A rhetorical situation is the context of a rhetorical act, made up (at a minimum) of a rhetor (a speaker or writer), an issue (or exigence), a medium (such as a speech or a written text), and an audience.” This definition only served to add even more confusion. By this time, I made the clever decision to just sit down, read the essay and find out from Grant Davie himself.

I’m not going to lie; Grant Davie’s essay was challenging and hard to grasp at first. However, three reads and countless internet searches later, I was moderately confident in my knowledge of rhetorical situations and their constituents. Rhetorical situations are situations that prompt the author to find ways to communicate with their audience, no matter who they are. Grant Davies persuades us to be “rhetors who can define the fundamental issues represented by a superficial subject matter–and persuade audiences to engage those issues—in a position to maintain decisive control over the field of debate” (267). Without properly communicating with our audience, convincing them to believe in what we are trying to prove can almost be impossible. Everything we write should contain a rhetorical situation and should use language that captures the reader’s attention from the jump and keeps them reading. The connection between rhetor and audience must exist for the discourse to bloom.

The commercial I chose to analyze was a 2013 Nike “Possibilities” commercial. The commercial begins with a clip of a girl jogging and a narrator’s voice telling her: “Listen, if you can run a mile, run a race.” The girl is then transported to a race where soon after the narrator says, “You know what? Run a marathon.” This time, the girl is thrown into the middle of a New York City marathon. The clip ends with the narrator excitedly yelling “Outrun a movie star!”, and our confused (yet determined) subject is shown racing past an oblivious Chris Pine. Throughout the entire commercial there are similar situations shown with the same narrator persuading different people to go to the next level. The narrator convinces a cyclist to ride a bull, a dancer to play soccer, a ping pong player to face off Serena Williams, and a playground basketball player to dunk on LeBron James.

This ad is a clear example of a rhetorical situation. Its goal is to persuade different people to achieve bigger and better things and convince them of their potential. The rhetor in this ad is our motivational narrator and the targeted audience are the athletes. This narrator is convincing his audience that once they step out of their comfort zones, they will be able to achieve more than they ever thought possible. I believe the exigence of this situation, on Nikes’ part, was the goal of showing people that they are much more than what they think and can achieve extraordinary things.

As someone experiencing this commercial from a different point of view, I do consider this commercial to be quite persuasive. The rhetor’s exigence was to successfully persuade his audience to “just do it”, and each one listened. His persuasion appealed to his audience and therefore he succeeded in creating a rhetorical situation.

Rhetorical situations are also present in Gloria Anzaldua’s essay. Everything about her essay, “How to tame a wild tongue” is powerful. The captivating way she tells her story while shedding light on an often-overlooked issue captured my attention immediately. She brings light to issues of identity, cultural imperialism, racism, and sexism and talks about the hardships she has faced living as a Chicana woman in the western world. She tells her readers, “For a people who are neither Spanish nor live in a country in which Spanish is the first language; for a people who live in a country in which English is the reigning tongue but who are not Anglo; for a people who cannot entirely identify with either standard (formal, Castilian) Spanish nor standard English, what recourse is left to them but to create their own language?” (Anzaldua 33). Anzaldua is clearly an independent, strong, and self-confident woman whose cultural background, heritage, and language are held very sacred.

Personally, I related a great deal to the problems Anzaldua has faced throughout her life. She is a Latin-American woman living in the United States speaking a language that is constantly being censored. She recounts that “In childhood we are told that our language is wrong. Repeated attacks on our native tongue diminish our sense of self. The attacks continue throughout our lives.” (39) She is too American for her home, and too Latina for America and each society attempts to “tame her wild tongue”.

When I first came to America at the age of two, I was thrown headfirst into an entirely different society. I had to learn a completely different language and assimilate into a different lifestyle. I recall constantly being mocked for my silly accent and belowaverage English by my peers. Over the years, my English improved and I slowly began to assimilate with the American culture. Unfortunately, this wasn’t the end of my identity problems. Although the judgment from America had lessened, the judgment from my hometown, Sudan, only grew. When I went back to Sudan, my family and friends would scold me about my broken Arabic and how my tongue was “too American” for Sudan. Some would even make dry jokes about how I wasn’t Sudanese anymore, but rather a “halabia”, which is the term used for an American.

Nowhere feels like home. No matter how hard I try, I am not completely enough for either side. After writing this last paragraph, I’ve realized how Anzaldua created a rhetorical situation within her essay. Her exigence was to show the world how America continuously tries to strip her of her identity. Her voice was evident in her writing and the way she described her experiences spoke to me personally and allowed me to think about my own experiences and my own difficulties. Her issues were my issues, and in a way, I felt as though we were connected.

This is one of the most important factors in a rhetorical situation. The fact that Gloria could tell her story and make a connection between herself and the reader showcases how brilliant of a writer she is. She also appeals to not only one, but two separate audiences: one that will sympathize with her experiences, and one that will relate to her hardships. The more people she is able to reach through her writing, the more success she will have at spreading her message.

Because I had such a strong emotional connection with what she was writing, I noticed that my desire to continue reading strengthened. I realize now that should this essay be about another experience that I may not have related to, my reaction would most likely be different. That is why catering to an audience and providing a clear exigence in writing is very important.

In the future, I plan to be more careful with my writing. I must always check that I am writing with a purpose and writing for an audience. Understanding rhetorical situations and being aware that they exist in everything is the key to successful writing.

A Critique of Rhetorical Situations and Their Constituents, an Essay by Keith Grant Davies. (2021, Sep 10). Retrieved from http://studymoose.com/a-critique-of-rhetorical-situations-and-their-constituents-an-essay-by-keith-grant-davies-essay 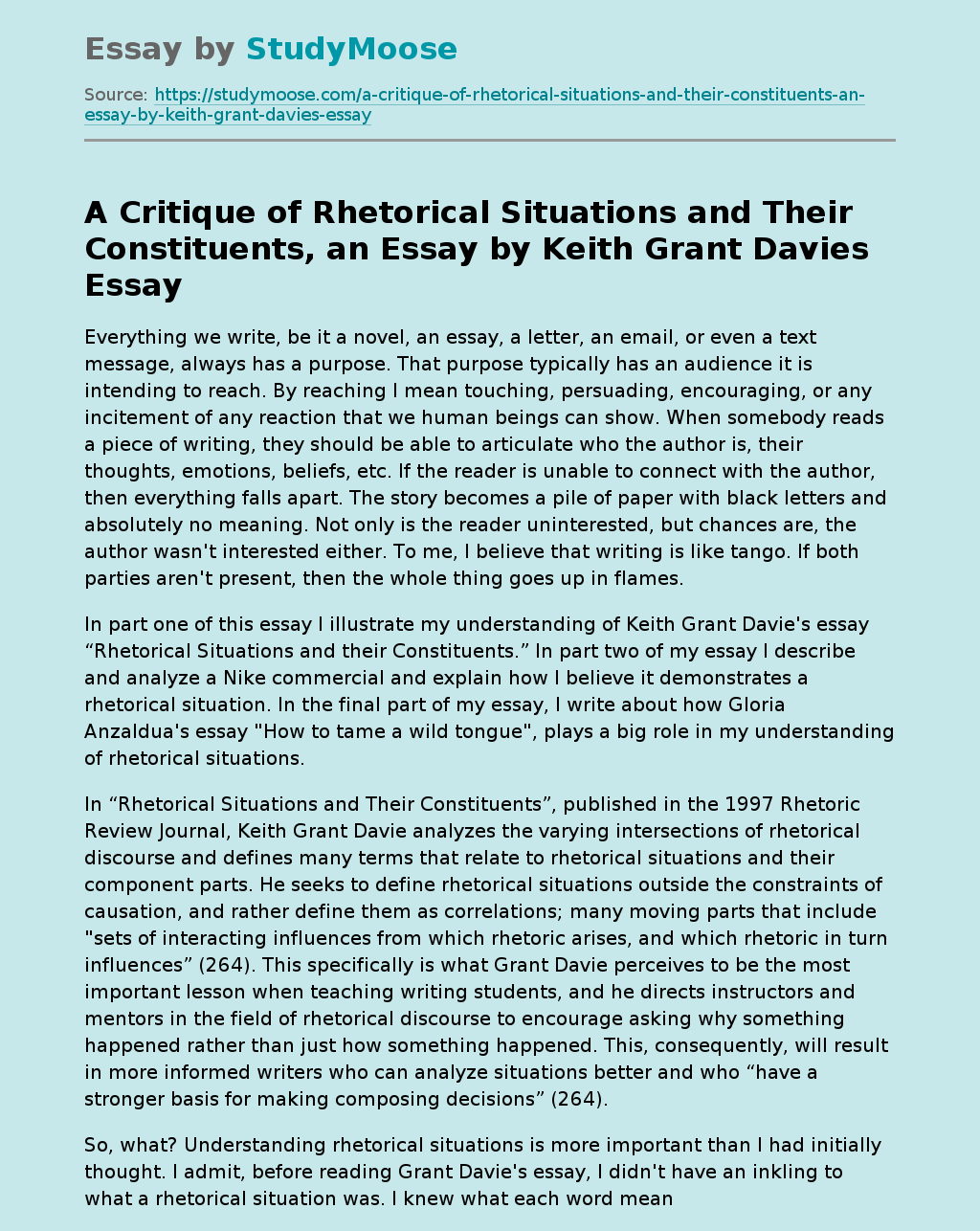