Parenting is always a debatable topic in America. Every person has an opinion on how a child should be raised and disciplined. In Amy Chua’s “Why Chinese Mothers Are Superior” (an excerpt from Battle Hymn of the Tiger Mother), Chua explains Chinese parenting and how it is effective in her life. She claims that by breaking down a child and pushing them to their full potential, the child will, in turn, be confident and incredibly successful. Through the use of several rhetorical devices, Chua supports, as well as weakens, her claim and expresses a different, controversial way of parenting.

Don't use plagiarized sources. Get your custom essay on
“ Rhetorical Analysis – “Why Chinese Mothers Are Superior” ”
Get custom paper
NEW! smart matching with writer

An important element in Chua’s argument is her ethos. She is clearly an intellectual individual, given that she is a professor at Yale University. Putting aside her credentials, this essay brings forth a distinct character. From the start, she identifies herself as a tough and strict “Chinese mother”. Throughout the piece she uses several personal experiences that support this assertion.

The reader recognizes a sense of confidence from Chua as she repeatedly contrasts Western-parenting ideals from Chinese-parenting ideals. As far as her credibility as an author, it is questionable. She writes, “ Chinese parents believe that their kids owe them everything.

The reason for this is a little unclear…” Her credibility begins to slip when she uses the word “unclear”. This statement suggests that she does not even know herself why she is parenting the way she is parenting. It also presents a perfect opportunity for opposing people to make an argument against Chua’s style of parenting.

Another instance where Chua’s credibility becomes uncertain is when she writes of mimicking her husband when he intervenes in a dispute between her and their daughter. It shows that she is unwilling to listen to the other side of her argument and has this my-way-or-the-highway complex—which is not necessarily an attractive outlook to have. It seems that an author who is open to looking at both sides of an argument is a more respectable author.

Chua’s use of pathos is particularly insensitive. She uses it more to take a jab at Western culture rather than to make an appeal on either side. Several times Chua makes up these hypothetical scenarios and discusses what Western parents would do and then what Chinese parents would do. Her idea of how Western parents react is seemingly dead on but there is a sarcastic tone about it. What is really interesting about her emotional appeal is that she quotes her husband who opposes one aspect of her argument. He says, “Children don’t choose their parents…so it’s the parents’ responsibility to provide for them,” which is an appeal to Western parents. She immediately shuts his argument down but fails to explain why it is “a terrible deal for the Western parent.” This only weakens her claim because, again, she is not being open-minded. In the end, Chua makes a very general appeal by saying, “All decent parents want to do what’s best for their children.” It is confusing because this statement somewhat qualifies her claim. First, she refutes Western parenting, then, comes back to say that Western and Chinese parents are all one in the same in the way that they care for their children. Chua’s motive is unclear.

Beyond Chua’s strong opinions, she utilizes statistics and facts in her argument. The statistics at the beginning of the piece describe percentages of Western and Chinese mothers who agreed that “‘stressing academic success is not good for children’ or that ‘parents need to foster the idea that learning is fun.’” The outcome showed that 0% of Chinese mothers agreed and they, instead, valued the idea of successful children resulting from successful parenting. These types of statistics definitely support Chua’s “Chinese mother” persona. The statistics also supported her claim of how much time Chinese parents put into helping their children make academic achievements. It is difficult to argue with facts and data, however, Chua does not cite the sources of this data. For all the reader knows, she could have made it up. It may be a more functional logical appeal if the studies she quotes were from a well-known and respected source.

Chua’s choice of diction reflects possible exaggeration on Chua’s behalf and confusion for the reader. It makes sense to exaggerate in order to stress the point she is trying to make but it also triggers the reader to doubt and question, which does not help her cause. Referring to her daughter, she writes, “calling her garbage…when she acted extremely disrespectfully toward me.” The idea of someone acting “extremely disrespectfully” varies from person to person. It is very biased statement. There is no way to interpret how her daughter was really acting. Already having examples of Chua’s ethos from this piece, it is practical to assume she is exaggerating. Chua’s diction is also troubling, especially when she writes, “All decent parents want to do what’s best for their children.” What are “decent parents” and what is “best” for any child? She does not elaborate on these key terms. It is the beginning of an argument on definition. Like in the case of Chua’s exaggeration, there is no way to determine what qualities a good parent has. There is no way for every parent to agree on a list of things that are best for children.

Another technique the author uses to get her point across is repetition. Numerous times throughout her essay Chua repeats two words at the beginning of a sentence, “By contrast…” She is making it very clear that there are differences between Western parents and Chinese parents. This is effective because the reader is constantly reminded that these two types of parents are not comparable in Chua’s mind. There is also a bit of repetition in terms of actions of the author. It seems like there is a cycle of Chinese parenting in her life. She raised her daughters the way her parents raised her. Chua’s father called her “garbage” when she acted inappropriate and Chua called her daughter “garbage” when she acted inappropriate. This cycle of Chinese parenting indicates that Chinese culture is unchanging or very hard to change. Overall, through repetition, the reader gets a good sense of contrasting cultures.

The intended audience for this argument is an element worth discussing. Chua was most likely aiming this piece specifically at Western parents. The argument is definitely eye-catching to any parent and is compelling enough to spark disagreement. Chua seems to want that reaction because the purpose of her essay was to contrast Chinese parenting and Western parenting and explain how Chinese parenting is more effective—in her opinion. It almost seems as though she wants to rub it in the faces of Western parents, maybe even spark guilt. The effect she wants to have on her audience may be for them think about her claim and reevaluate their methods of parenting.

As mentioned before, Chua claims that by criticizing a child and hammering academic success into his or her brain the child will grow to become a prosperous and confident person. Her purpose gets through to the audience but does not necessarily persuade them. She utilizes rhetorical devices that both support and weaken her argument. Chua’s lifestyle is a result of how she was raised. In a sense, her piece is a great lesson for Western cultures about Chinese culture. Chua may or may not effectively explain why Chinese mothers are superior but, ultimately, she conveys a unique, if not totally outrageous, idea of parenting directed at the average Western parents. 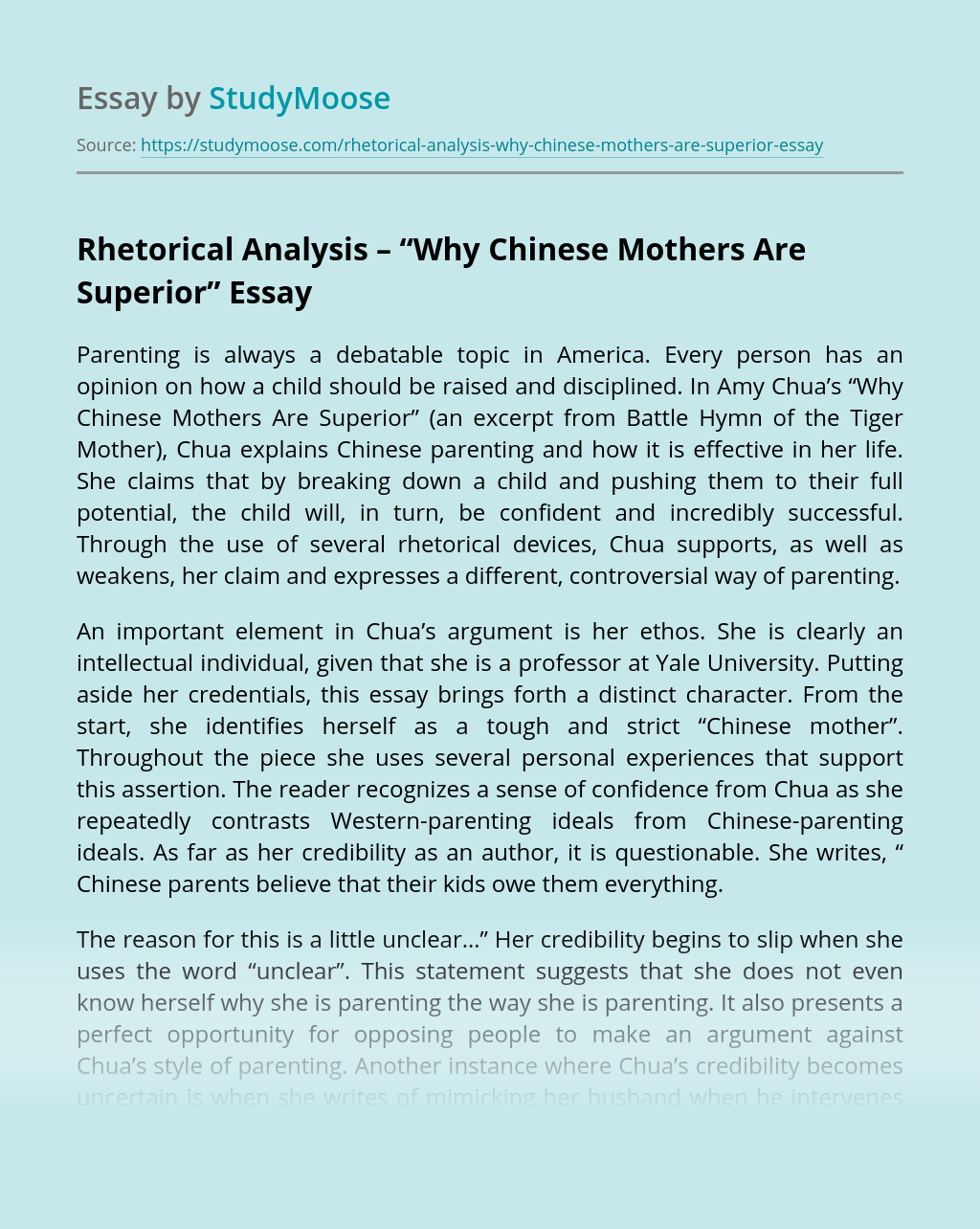