Candace Lynne Lightner, also known as Candy Lightner, is well recognized as being the founder of Mothers Against Drunk Driving (MADD) (Overbey, 2006). Having been born in the year 1946 in Pasadena, California, Candace graduated from high school and proceeded to enroll in American River College in Sacramento where she also graduated (Lerner, 2011). She later married Steve Lightner and went on to have three children. When her daughter was an infant, Lightner’s car was involved in an accident where it was rammed into from behind by a drunken driver.

Don't use plagiarized sources. Get your custom essay on
“ Mothers Against Drunk Driving ”
Get custom paper
NEW! smart matching with writer

Fortunately, Serena, the daughter, suffered minor injuries. However, six years down the line, Lighter’s son, Travis, was run over and seriously injured where he suffered numerous broken bones in the process (Levinson, 2002). He went into a coma but unfortunately received permanent brain damage. Travis was run over by an unlicensed driver who was impaired by tranquilizers while driving and what is perhaps most shocking is the fact that the driver did not receive a single ticket following the accident (Overbey, 2006).

Proficient in: Drinking And Driving

Looking at the history of Lightner, one might say that luck was not on her side especially where her children were concerned due to the numerous misfortunes they were experiencing. As if that was not enough, Lighter’s 13 year old daughter, Cari, was one day in 1980 walking in her neighborhood in Fair Oaks on her way to church for a carnival (Lerner, 2011). She was suddenly hit from behind by a drunken driver who had apparently momentarily passed out then woke up and drove off after having murdered Cari (Levinson, 2002).

Her body had been thrown a number of feet and was so badly damaged that not even her organs could be given up for donation. On conducting an investigation on the driver, it was revealed that the offender was a repeat DWI who had been released on bail for a hit and run drunken driving crash merely two days before killing Cari (Overbey, 2006). It was also his 5th offense in a span of four years.

Four days after the tragedy and while in mourning for her daughter a day after her funeral, Lightner started the Mothers Against Drunk Driving in her den. Lightner had also just received news from the police that the man who committed the crime would not even spend time in jail and this brought about so much rage within her, leading her to establish MADD (Lerner, 2011). The main aim or purpose of starting this particular organization was to be able to bring about public awareness of the serious nature of drunken driving in addition to promoting tough legislation against this particular crime (Levinson, 2002). The key issue that led to the creation of MADD was drunken driving, a problem that was also identified as being a social problem. As a response to her experience, Lightner formed MADD so as to help victims of crimes carried out by people driving under the influence of drugs or alcohol, to increase public awareness on the problem and to help the families of such victims (Overbey, 2006).

Before Lightner’s crusade, intoxication was not taken seriously and some comedians even went to the extent of making a career of impersonating drunken individuals on stage. Her perceptive approach was to put human faces on the victims of drunk drivers where statistics were more than just a collection of numbers (Lerner, 2011). Lightner helped individuals come to the realization that deaths caused by drunk driving were actually not an inevitability that could be accepted. The logic as well as emotional impact involved in the MADD resulted to a dramatic transformation with regards to public attitudes toward drunken driving which was now seen as being socially unacceptable (Levinson, 2002). A few policies were created as a result of MADD’s influence even though quite a number of problems were also experienced while implementing the policies. Candy Lightner’s efforts pushed President Reagan to appoint a BRCDD, otherwise known as the Blue Ribbon Commission on Drunk and Drugged Driving in the year 1982 which saw over 400 drunk driving laws being enacted all over the United States (Overbey, 2006).

In the course of the same year, Congress also passed legislation that rewarded states that managed to increase their least officially permitted drinking age to 21 years. However, a majority of states opted to maintain the age limits they had earlier deemed more suitable, and this created a problem for MADD’s mission (Lerner, 2011). Lightner campaigned for legislation that would financially punish those states that would resist Washington’s de facto demand where she also found herself having to counter objections that the measure singled out with regards to legal adults age 18, 19 and 20 years (Levinson, 2002). In addition, MADD began outgrowing its mission and with time transformed the definition of the problem to incorporate the reasonable adults who respond to MADD’s campaigns (Overbey, 2006). Instead of concentrating more on repeat offenders and those who are considered too drunk to drive, today’s MADD focuses on higher beverage taxes and unnecessary low drunk driving arrest thresholds (Lerner, 2011).

When Candy Lightner started Mothers Againnmn n nst Drunk Driving, her main mission was to stop drunk driving, provide support to the victims of such crime and prevent underage drinking. However, as time went by, MADD’s mission outgrew itself in that instead of attacking drunk driving, it started attacking drinking in general. This shift forced Lightner to leave the organization that she herself created because she felt that it was trying to minimize her role as the founder. In addition, MADD completely ignored the real drunk drivers who are the cause of a majority of deaths on the roads and instead paid more attention to social drinkers by embarking on large PR scare campaigns. 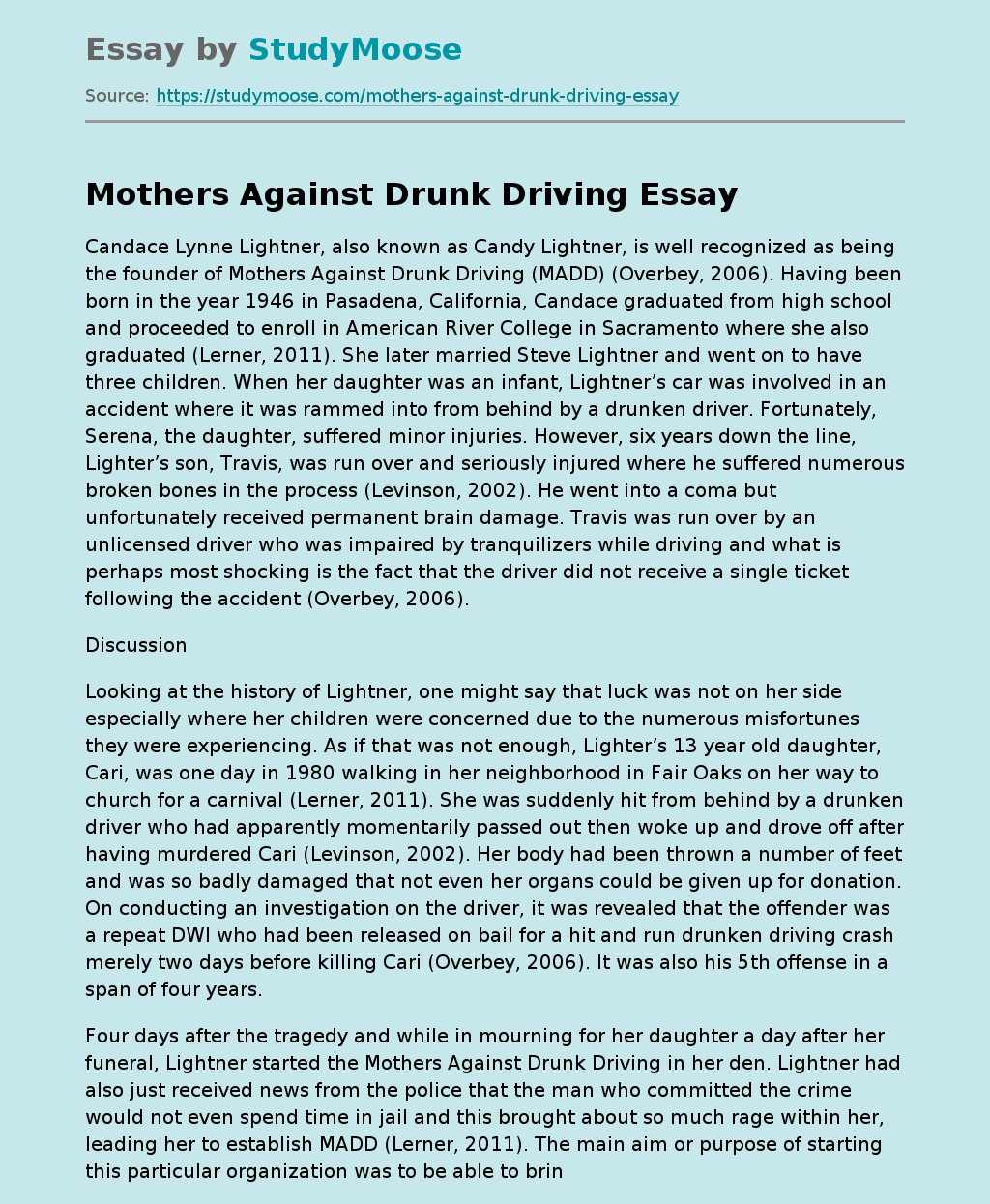