Rhetorical Analysis of "The Shadow Scholar"

The prefix ‘pseudo’ seems to perfectly describe the character of Dave Tomar, known by all as Ed Dante (Dave Tomar is Dante’s pseudonym). His article “The Shadow Scholar,” which appeared in the chronicle review section of _The Chronicle of Higher Education_ on November 12, 2010, stirred controversy and a scare throughout the entire professional world. Doctors, educators, administrators, law officials, and all other professions of importance consequently came under the microscope. Dante has spent the course of a decade as a full-time ghostwriter who is paid to help students cheat as they achieve ‘competency’ in their chosen fields of study.

Don't use plagiarized sources. Get your custom essay on
“ Rhetorical Analysis of “The Shadow Scholar” ”
Get custom paper
NEW! smart matching with writer

The money is good for Dante, as it supports him with $66,000 per year. While Dante did agree to speak on behalf of his involvement in this ghostwriting industry, he did so with carefully planned strategies to conceal his true character until blowing his own cover at a specified time, which came in January 2011. In 2011, _ABC World News with Diane Sawyer_ and _Nightline_ both interviewed Dante. Dante used voice covers and did not show his face in any of the many confessions he has subsequently partaken in.

After the resulting widespread quake of debate and disturbance, students, educators, and parents were left among those who felt the chief responsibility to respond and investigate this matter of cheating.

“The Shadow Scholar” became the top commented-on article in the history of _The Chronicle of Higher Education_, obviously without questions or doubts on its relevance. Dante has since announced that he has been signed by _Bloomsbury USA_ to write a novel detailing his experiences and practices as a ghostwriter. The finished product, _The Shadow Scholar: How I Made A Living Helping College Kids Cheat_, received obligatory attention as well. Dante effectively uses his witty and dry humor and personal credibility to clearly draw upon the rhetoric appeals of logos, pathos, and ethos, as well as he calls for recognition of practices in reaches of a large audience of students, parents, and educators in the college business.

Dante uses an informal and casual tone as he engages the audience in his article. “The Shadow Scholar” is primarily formatted and presented as a condensed version of the actual experience of writing a paper for one of the lost and deficient students who approach Dante. The article begins with the story of being asked for help by one of these students: “The request came in by e-mail around 2 in the afternoon. It was from a previous customer, and she had urgent business.” Sarcasm, wit, and dry humor accompany the many strong points he states. Dante’s speech is full of euphemisms, which are humorous simply because of the understatement and reality behind the said statements. Dante’s honesty and portrayal of a confessor are supplemented by a defense of his own role in the madness. He captures the attention of the reader at the beginning of the article by stating that he “live[s] on the desperation, misery, and incompetence that your educational system has created.”

Yet, with careful reading, one will realize that Dante shifts blame from himself to the educational system itself. Dante continues this scary discussion when he sarcastically states that “Our lives are in capable hands – just hands that can’t write a lick… I’ve even written pharmaceutical-treatment courses, for patients who I hope were hypothetical.” Dante also uses a more light-hearted tone throughout some sections of the article. His tone even represents a dash of egotism. He claims to have “written essays that could be adapted into Meryl Streep movies.” He clearly and scandalously enjoys his vocation. Despite the overwhelming and shocking nature of his work, Dante represents himself as a relatable, practical, and down-to-earth sort of individual. All ethical scrutiny aside, he comes across as any other co-worker in your office who works hard, long hours to pay the bills. In defense, he continues that “there’s the money, the sense that I must capitalize on opportunity.” Yet despite this relatable personalization, the superhuman qualities that Dante possesses are no light joke.

Dante builds both trust, awe, and anger in his audience – all important aspects which build the foundation of a successful controversy. Within this structure, Dante proceeded to include background information on his previous occurrences as a ghostwriter. These are the points that draw personal credibility to Dante. Shocking accounts of his experiences capture the attention of the reader. Dante quotes that he “will cease all human functions but typing, Google until the term has lost all meaning, and drink enough coffee to fuel a revolution in a small Central American country.” This is not surprising, as it turns out that Dante occasionally churns out “20 to 40 pages a day.” The trust that Dante builds with his experience is built as he progressively describes his daily life, his role in the company, and the company’s role in society.

Dante showers the reader in unbelievable statistics on the number of paper he writes and appalling recounts of all of the different professions he has written dissertations, theses papers, and other assignments for. His combined list of written topics includes, but is not limited to, the following: “international diplomacy, hospitality, business administration, accounting, history, cinema, labor relations, pharmacology, theology, sports management, maritime security, airline services, sustainability, municipal budgeting, marketing, philosophy, ethics, Eastern religion, postmodern architecture, anthropology, literature, public administration… sociology… industrial/organizational psychology… [and] education.” Dante cites Google as the source of all of his knowledge, which is something that today’s generation can second. Dante’s method which solidly builds trust within the reader, however, is not simply his confession, but the motivations and good intentions harbored within his decision to quit and admit.

Despite personal partiality as an essay writer in the cheating industry and cold facts about his experience within it, Dante appeals to his audience in a manner consistent with that of the motivation and desire for change in the educational system. Rhetoric appeals of logos, ethos, and pathos come into play as he builds on the ethics, logic, and emotions of the reader. While taking responsibility for his own liabilities, he proceeds to call for action to change. ***** The more detailed and meticulous rhetorical devices that Dante used and covered in his article are those of pathos and logos. Pathos, which is the appeal to the emotions of the reader, is found throughout the article. Some of the main emotions of the reader that Dante draws upon and instigates within the reader are that of shock, alarm, distress, unease, panic, anger, despise, betrayal, and disgust. The reader cannot help but to feel disgusted, angry, and upset with the way that the educational system is set up. Dante himself claimed and confessed that he lost track in college, which eventually led to his career as a custom-paper writer who helps his peers cheat and lose track.

“Tremendous disappointment” is what Dante claims “awaited” him in college. This disappointment may relate to many college and university students as they pursue their studies. The experience that Dante had is no better surmised than with his actual words describing it: “How dispiriting to find out that college was just another place where grades were grubbed, competition overshadowed personal growth, and the threat of failure was used to encourage learning.” Dante uses this commentary to find mutuality, commonality, and cohesion between the problems that students face today. Students can relate to Dante. Teachers may also face an emotion of shock and disappointment as Dante directly addresses the daunting actuality that his “customers are your students.” Logos is used, slightly in conjunction with pathos, as he cautions that “these students truly are desperate.” His facts back it up. “I have seen the word ‘desperate’ misspelled every way you can imagine… They couldn’t write a convincing grocery list, yet they are in graduate school. They really need help. They need help learning and, separately, they need help passing their courses. But they aren’t getting it,” are the exact words which he employs in the article.

Dante clearly is passionately worried, troubled, and asking for help for not only his customers, but for all of the students having trouble and struggling to pass courses in today’s U.S. educational system. Dante speaks on, accounts for, and defends his own experience as a college student, and his later experiences as a ghost-writer for college students, in an attempt to cause a controversy which will eventually lead to the investigation of the system which produces the unethical behaviors of cheating. He continues to use logos as he describes the “three demographic groups [which] seek out my services: the English-as-second-language student; the hopelessly deficient student; and the lazy rich kid.” Dante asserts that “for the first two types of students- the ESL and the hopelessly deficient-colleges are utterly failing them.” He blames the pressures of grading, and the transition into a new culture as being over-bearing and incapable of producing truly competent students.

In regard to the ‘lazy rich kid,’ Dante states that “colleges are a perfect launching ground-they are built to reward the rich and to forgive them their laziness. The lazy rich kid… is poised for a life of paying others and telling them what to do. Indeed, he is acquiring all the skills he needs to stay on top.” Perhaps, this assertion can also be attributed to the ethical concerns of our generation. It is common knowledge that money and power are the top characteristics of the most ‘successful’ people in our time, day, and country. Ethos is the primary rhetorical device that Dante uses. Cheating is unethical. The entire article’s theme, then, is appealing to the rhetorical device of ethos. Dante also proposes that the educational system lacks a few ethics: mainly, the lack of care and concern for the students whom college professors teach. Dante articulates this as he comes full circle to appealing again to pathos: “Here I was, begging anybody in authority to take my work seriously. But my classmates did. They saw my abilities and my abundance of free time. They saw a value that the university did not.” This appeals to the individual’s emotions and experiences. Conclusively, all three rhetoric devices are used circularly to utter Dante’s ideas.

Dante structurally comes full circle in his article by playing on his personality through tone and style, by turning a personal experience into a reflection of experiences and base of credibility built on solid facts, and by using rhetoric appeals finally stimulate the reflection, curiosity, and motivation for change within the reader. Dante may appeal to most as the ‘bad guy.’ In fact, the term ‘bad guy’ could even be delegated to students who cheat, or to professors who do not catch the cheating, or to the simple discouraging environments of a select few. However, Dante expresses that the root of the problem is an alarming discrepancy in the attitudes, motivations, rules, and policies behind the educational system.

Rhetorical Analysis of "The Shadow Scholar". (2016, Aug 05). Retrieved from https://studymoose.com/rhetorical-analysis-of-the-shadow-scholar-essay 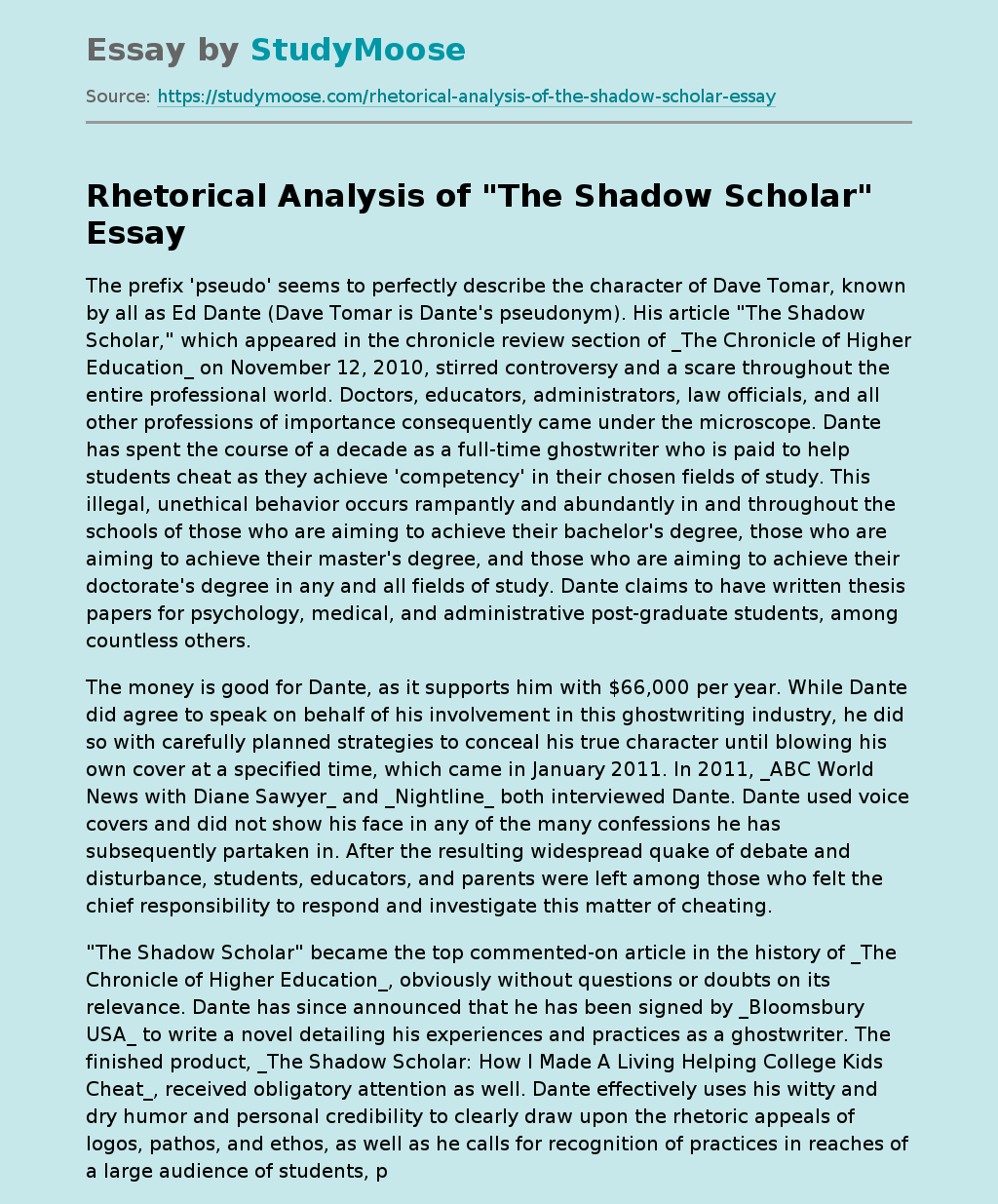