Directions: Read “Civil Disobedience.” As you read, underline examples of Thoreau using rhetorical devices and identify and explain the devices via annotation. Answer questions 1-4 to prepare for further work with a small group. The group will work together on questions 5 through 8. Be ready to explain your answers to the whole class. Even when you’re working as a group you should be writing the answers.

1. Based on your reading of “Civil Disobedience,” what kind of person does Henry David Thoreau seem to be? How would you characterize his state of mind and emotion as he composed this essay? Cite specific examples from the text to support your claims about Thoreau’s voice and persona.

Don't use plagiarized sources. Get your custom essay on
“ Rhetorical Analysis of Thoreau’s “Civil Disobedience” ”
Get custom paper
NEW! smart matching with writer

Voice = textual features such as diction and syntax, that contribute to a writer’s persona Syntax and tone are formal, academic, eloquent. Sentences tend to be longer, complex sentences punctuated with frequent commas and semicolons (to indicate pauses) which lends the pacing of a speech, almost as if even though we’re reading a written word, it’s Thoreau himself speaking to us, lecturing even.

Also, parallelism (more precisely in the following example, anaphora): Yet this government never of itself furthered any enterprise, but by the alacrity with which it got out of its way. It does not keep the country free. It does not settle the West. It does not educate. The character inherent in the American people has done all that has been accomplished. (paragraph 2) (The last “It does not…” with the “The…American people has done” is antithesis) Diction is academic and intelligent, supporting the same tone mentioned above (“alacrity” is a lesser-known word for “speed”).

Repeated use of the “machine” metaphor when referring to the government and politicians/lawyers who work for it. Sets up an “Us” (free-minded, free-thinking citizens who rebel against slavery) versus “Them” (the government machine and those who would support it, as well as those who talk but don’t act against it). He uses “We” a lot, further emphasizing this division against government, but also the unity of people who agree with his points, a “we’re in this together” kind of thing. Repeated use of words associated with honorable, positive human qualities as well as those associated with evil and guilt: “tradition…integrity…vitality…force” versus “complicated machinery” (paragraph 2); “a corporation has no conscience…agents of injustice…damnable business…at the service of some unscrupulous man in power” (paragraph 4) Persona – the character that a writer/speaker conveys to the audience Anti-authority (at least rebellious against corrupted power). Anti-government. In favor of the rights of all free-thinking people. A bit of a “maverick”. Angry and in some cases, bitter at the government for injustice. Critical and mocking of people who claim they disagree with slavery but do nothing about it.

2. What does Thoreau do in “Civil Disobedience” to urge his readers to believe in him as a trustworthy, credible person? Point out specific passages where you felt Thoreau was (or was not) particularly believable (this gets at the ethos of the piece). Other examples of logos or pathos?

A writer builds ethos (an appeal to the author’s credibility) by establishing himself as credible, believable, and trustworthy.

3. One device a writer can use to get a point across is metaphor. Thoreau uses metaphor extensively in “Civil Disobedience.” Notice, for example, what he compares machinery to or how he uses gaming metaphorically. Select two metaphors and explain, citing specific examples from the text, how they help Thoreau’s central idea become more vivid for his readers.

The “machinery” metaphor is extended—used throughout the work:

The “gaming” metaphor: (paragraph 12) “All voting is a sort of gaming, like checkers or backgammon, with a slight moral tinge to it, a playing with right and wrong, with moral questions; and betting naturally accompanies it…Even voting for the right is doing nothing for it. It is only expressing to men feebly your desire that it should prevail. A wise man will not leave the right to the mercy of chance, nor wish it to prevail through the power of the majority.”

4. How do you think Thoreau wanted his readers to react to the essay? What did he want them to feel? think? believe? do? How do you know? Identify specific places in the essay that help you determine Thoreau’s purpose.

(paragraph 15) “…Some are petitioning the State to dissolve the Union, to disregard the requisitions of the President. Why do they not dissolve it themselves—the union between themselves and the State—and refuse to pay their quota into its treasury?

(paragraph 17) “Unjust laws exist; shall we be content to obey them, or shall we endeavor to amend them, and obey them until we have succeeded, or shall we transgress them at once?”

(paragraph 23) “…If the alternative is to keep all just men in prison, or give up war and slavery, the State will not hesitate which to choose. If a thousand men were not to pay their tax-bills this year, that would not be a violent and bloody measure, as it would be to pay them, and enable the State to commit violence and shed innocent blood.”

5. Using the questions below, divide the essay into functional parts (a part of text classified according to its function—for example, introduction, example, or counterargument). Label the parts and be prepared to support your answers.

• 1) the exordium: the web that draws listeners into the speech, the speaker would introduce the subject at hand and include material that would make the audience attentive and receptive to the argument. • 2) the narration would offer background material on the case at hand • 3) the partition would divide the case and make clear which part or parts the speaker was going to address, which parts the speaker would not take up and what order would be followed in the development • 4) the confirmation would offer points to substantiate the argument and provide reasons, details, illustrations, and examples in support • 5) the refutation would consider possible objections to the argument and try to counter these • 6) the peroration would draw together the entire argument and include material designed to compel the audience to think or act in a way related to the central argument

a. Is there some section that clearly lets the reader know what subject the composition is about and what the writer’s purpose is? If so, where does this section begin and end? In this section, can you find an answer to the central question that the text has been written in response to, or can you find an indication of the text’s central argument?

b. Is there a part that explains any background information that the reader needs to know in order to be able to understand the answer to the central question or argument that the composition offers? If so, where does this section begin and end?

c. Is there some sentence or paragraph that focuses the reader’s attention on some particular issues, aspect, or theme that the paper examines as opposed to others that it could examine?

d. Is there some section that purposefully sets out material in support of the paper’s answer to the central question of its argument? If so, where does this section begin and end?

e. Is there a part that examines possible objections to the answer, argument, or supporting material? If so, where does this section begin and end?

6. Using a functional part where Thoreau is supporting his argument, see how many of the following rhetorical methods you can identify. Cite the paragraph number and a few identifying phrases or sentences of specific text to identify the method:

a. Relating anecdotes
b. Describing scenes and evoking sensory images
c. Defining terms and concepts
d. Dividing the whole into parts
e. Classifying the parts according to some principle or order
f. Providing cause-and-effect reasoning

7. Select one specific paragraph that you believe represents the most interesting, most vivid passage in “Civil Disobedience.” Describe as much of the style of that passage as you can. For every stylistic feature you notice, explain what you see as its effect on 1) the appeal of the essay, 2) the credibility of Thoreau (ethos), or 3) the emotional or persuasive power of the piece (pathos).

8. Point out some ways you see Thoreau tapping into the “cultural memory” of his readers. (Cultural memory in modern rhetoric refers to the writer-reader connection. It has to do with how much knowledge, information, and data a writer has about his audience and their culture. A simple way of talking about this is to ask: what does a writer know about is readers and their lives, and how does he or she use it to further his writing purpose?). To what does the text refer or allude with the expectation that readers will know the reference or allusion? Are these references and allusions likely to appeal to and affect readers today in the same way they did when Thoreau used them?

Rhetorical Analysis of Thoreau’s “Civil Disobedience”. (2016, May 10). Retrieved from https://studymoose.com/rhetorical-analysis-of-thoreaus-civil-disobedience-essay 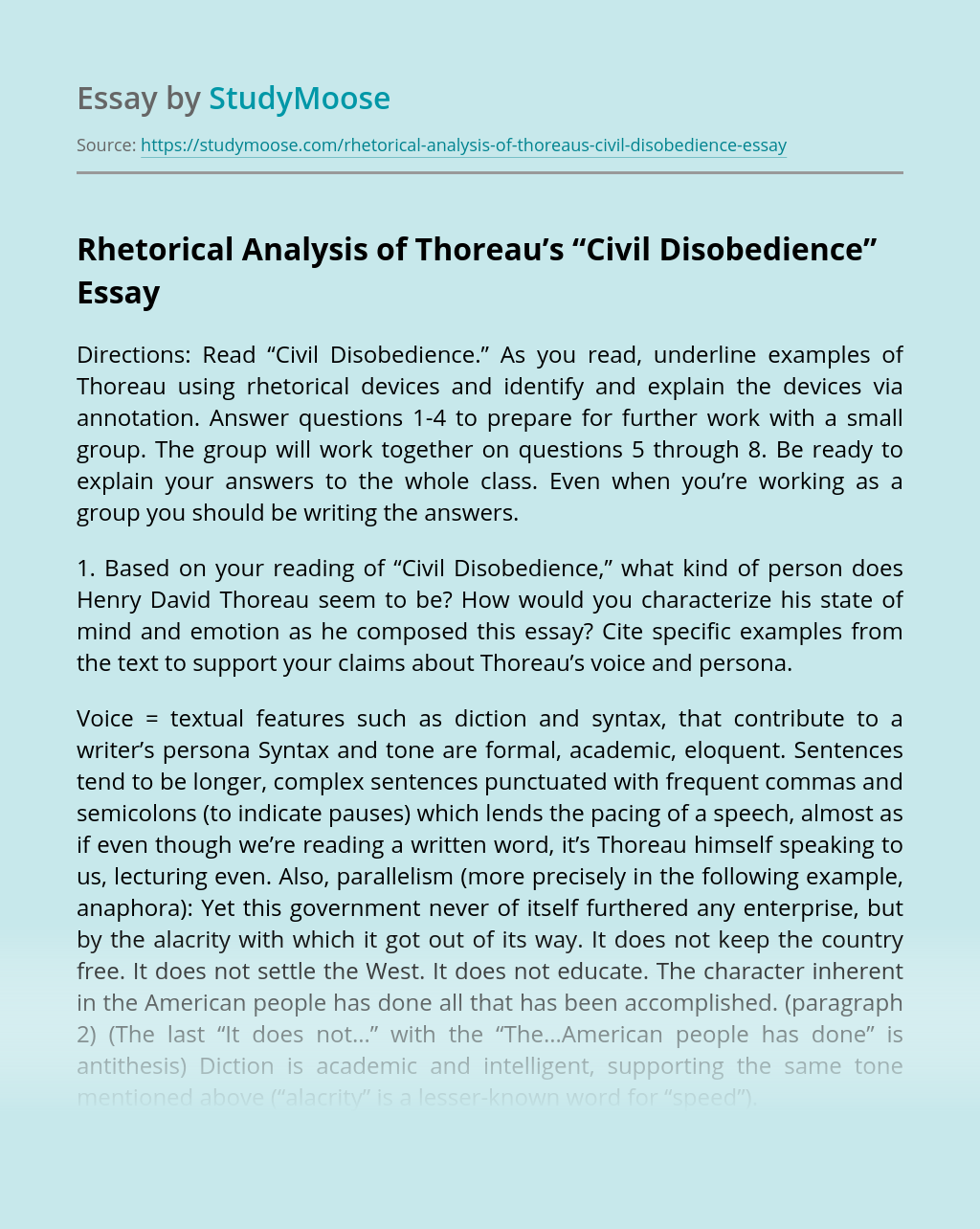