The philosophies of transcendentalism are exemplified through Emerson’s Self Reliance and Thoreau’s Civil Disobedience. Transcendentalism is also shown throughout Jon Krakauer’s investigative report, Into the Wild.

Don't use plagiarized sources. Get your custom essay on
“ Chris McCandless and Civil Disobedience ”
Get custom paper
NEW! smart matching with writer

Transcendentalism has three main ideals to live by: individualism, idealism, and indian religion. These ideas have influenced the works of philosophers, Emerson and Thoreau, and inspire the main character Into the Wild, Chris McCandless.

The impacts of Individualism on the writing of Emerson, Thoreau, and Krakauer are evident in works such as Self Reliance, Civil Disobedience, and Into the Wild. Individualism is freely thinking with no outside influence. In Self Reliance, by Emerson, it describes how making decisions based on what an individual personally thinks is right can be beneficial to all men. “To believe your own thought, to believe that what is true for you in your private heart is true for all men,–that is genius”(Section 1). Pursuing individual thoughts is beneficial to the population, as many people share similar struggles and strengths.

Enabling the ideas of one to relate to those of others. Self Reliance uses individualism by describing how one should believe in their own actions and thoughts. In Civil Disobedience, by Thoreau, he describes, “He who gives himself entirely to his fellow-men appears to them useless and selfish; but he who gives himself partially to them is pronounced a benefactor and philanthropist”(Section 8). This quote demonstrates that if a man gives up on himself than he is worthless, but a man who believes in himself has motivation and is of great worth to others.

Civil Disobedience uses individualism to encourage the point that partial motivation leads to not being motivated at all.

Idealism influences Chris McCandless, from Into the Wild, because he is shaped by Self Reliance and Civil Disobedience. Within Self Reliance and Civil Disobedience, idealism means doing the best and most true thing for the situation. An individual tends to stick to their gut feeling and trust their instincts. In Self Reliance, it describes how everyone’s personal thoughts are important to the world. “Nothing is at last sacred but the integrity of your own mind”(Section 7). Emerson writes about how personal thoughts and ideas are valuable and necessary in life. In Civil Disobedience, the writing depicts how a person specifically contemplates the most true action they could do for any situation. “If I devote myself to other pursuits and contemplations, I must first see, at least, that I do not pursue them sitting upon another man’s shoulders”(Section 17).

By devoting life to other pursuits and contemplations, the idealists are devoting themselves to making decisions that they truly want, hoping that others will start to do the same. In Into the Wild, Chris McCandless does what he thinks is the best thing to do at the time, so during a storm he trusts himself and prepares for what he believes is coming. “He buried his Winchester deer-hunting rifle and a few other possessions that he might one day want to recover”(29). McCandless hides and protects his possessions because in this situation that is what he believes to be the most true thing to do. Idealism in Self Reliance and Civil Disobedience was shown through Chris McCandless in Into the Wild because he trusted his instinct with preparing for a storm.

Indian Religion is highly demonstrated by Chris McCandless, and also described in Self Reliance and Civil Disobedience. Indian Religion is believing that it is possible to spiritually connect with yourself and the earth with nature. In Self Reliance, it illustrates how men should be grateful and connect with the spirit through every breath. “Men imagine that they communicate their virtue or vice only by overt actions, and do not see that virtue or vice emit a breath every moment”(Section 15). Emerson writes about how people should not be spiritually connected with nature in certain moments, but during all moments, down to each breath. In Civil Disobedience, Thoreau describes how nature is a necessity that is needed to live. “If a plant cannot live according to its nature, it dies; and so a man”(Section 31). Meaning because plants can not live with the proper nature and environment people can not either.

Engraving that nature is very important for individuals to connect with themselves and their environments in a deeper more spiritual way. In Into the Wild, Chris McCandless shows that he is not attached to any of his possessions whatsoever and show that he can rely on and live with only nature: “He changed his name, gave the entire balance of a twenty-four-thousand-dollar savings account to charity, abandoned his car and most of his possession, burned all the cash in his wallet”(Authors Note). McCandless is giving up his things so that he has nothing distracting him from connecting with himself, nature, and the spirit. Indian Religion is prevalent in Self Reliance, Civil Disobedience, and Into the Wild because each describes how nature is a necessary component for life.

Transcendentalism as a philosophy is depicted through Self Reliance, by Emerson, and Civil Disobedience, by Thoreau. Chris McCandless, from Into the Wild by Jon Krakauer lived by and is shaped by idealism, individualism, and Indian Religion, showing the influence of transcendentalism on others. 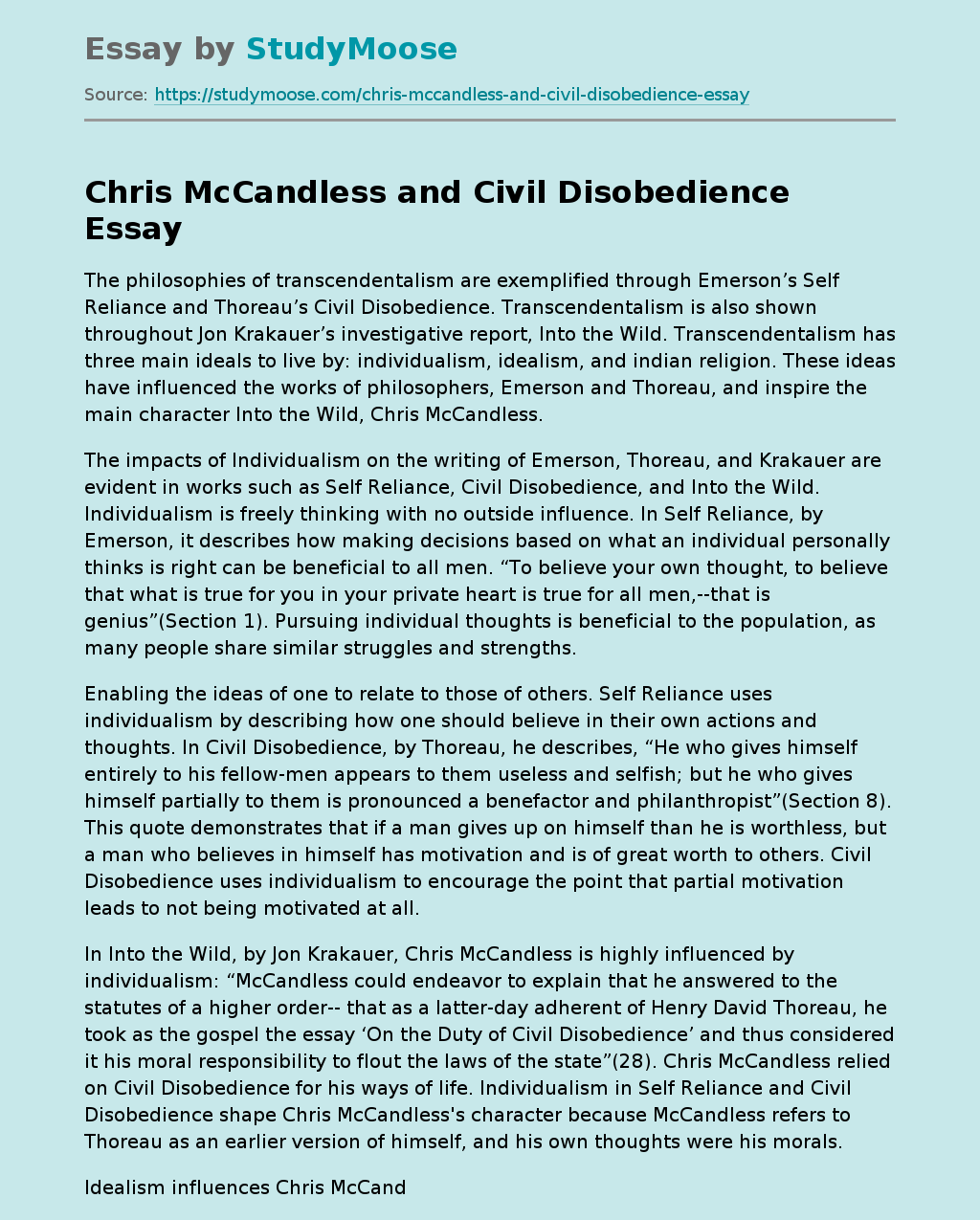