Into the Wild Theme

Through out the book, Chris is prompted to make many small decisions in order to determine how he will live the rest of his life. From the moment he decided to go onto the road from Virginia to the West Coast, then landing in Alaska, he made small mistakes due to ignorance to fine details. During the most part of the book, Christopher McCandless is struggling without himself knowing of it. Many people he sees and meets along the way have warned him about the dangers of traversing the wilderness, alone with very little supplies and experience.

Don't use plagiarized sources. Get your custom essay on
“ Into the Wild Theme ”
Get custom paper
NEW! smart matching with writer

After journeying into the deep Alaskan wilderness, Chris’s actions show that with ignorance to small details, suffering will soon follow. The term ignorance has many meanings. By Merriam-Webster, it is defined as a “lack of knowledge, education, and awareness”. Chris only had one of those, which was a education from Emory University, and high grades at that. He was smart enough to not reveal his true identity until a few days before death, in his journal.

Chris went by the name of Alexander Supertramp to all the people he met on his way to The Stampede Trail in Healy, Alaska.

His lack of knowledge about the wilderness and let along the country, led him to poison himself therefore leading him to a slow and painful death. His awareness also was a large contributing factor, because when the summer months came, the frozen river that he came to the bus on thawed, therefore making it impossible to pass.

Additionally, if he had looked at his Alaska State Guide to the Wilderness map, he would have come across a State Rangers’ cabin only a few miles from the bus that he was living in.

One example of Alex’s ignorance is depicted in his statement to his acquaintance, after he asked whether or not he had a hunting license: “Hell, no,” Alex scoffed. “How I feed myself is none of the government’s business. F*** their stupid rules. ” (Krakauer 6). As the book states, “Gallien briefly considered stopping and telling the authorities about Alex, then he thought better of it”. If his acquaintance, Gallien, told the rangers, that small leak from Chris’ mouth could have derailed his plans for ven the rest of his life. In addition to that, Chris also read his field guide to plants in the Alaskan wilderness. He knew that the roots were safe to eat, so he assumed that the seeds of the plant were also safe to eat. The seeds turned out to be poisonous, which led him to be bed-ridden, which later killed him. Many people who met Chris McCandless on his way to Alaska that talked with Jon Krakauer about their connection to him, said that he was a smart kid, but lacked the skills necessary to survive for a whole year.

As Krakauer summed up, “The prevailing Alaska wisdom held that McCandless was simply one more dreamy half-cocked greenhorn who went into the country expecting to find answers to all his problems and instead found only mosquitoes and a lonely death. ” (72). Chris found zero answers to his problems and later would end up with many more such as finding food, finding a way out, and simply surviving.

Many people, myself included, believe that if Chris had just payed attention to the fine details and not ignored them, he would have easily survived, and might have been able to live his whole life in the deep Alaskan wilderness. All Chris McCandless needed was some time to learn about the environment, to make better choices, and problem solve more effectively when problems arose. However, he failed to do that. He was forced to face the harsh consequences, which because of his ignorance to small details, he ended up dead in one of the most brutal terrains on the planet.

Into the Wild Theme. (2020, Jun 02). Retrieved from http://studymoose.com/into-the-wild-theme-new-essay 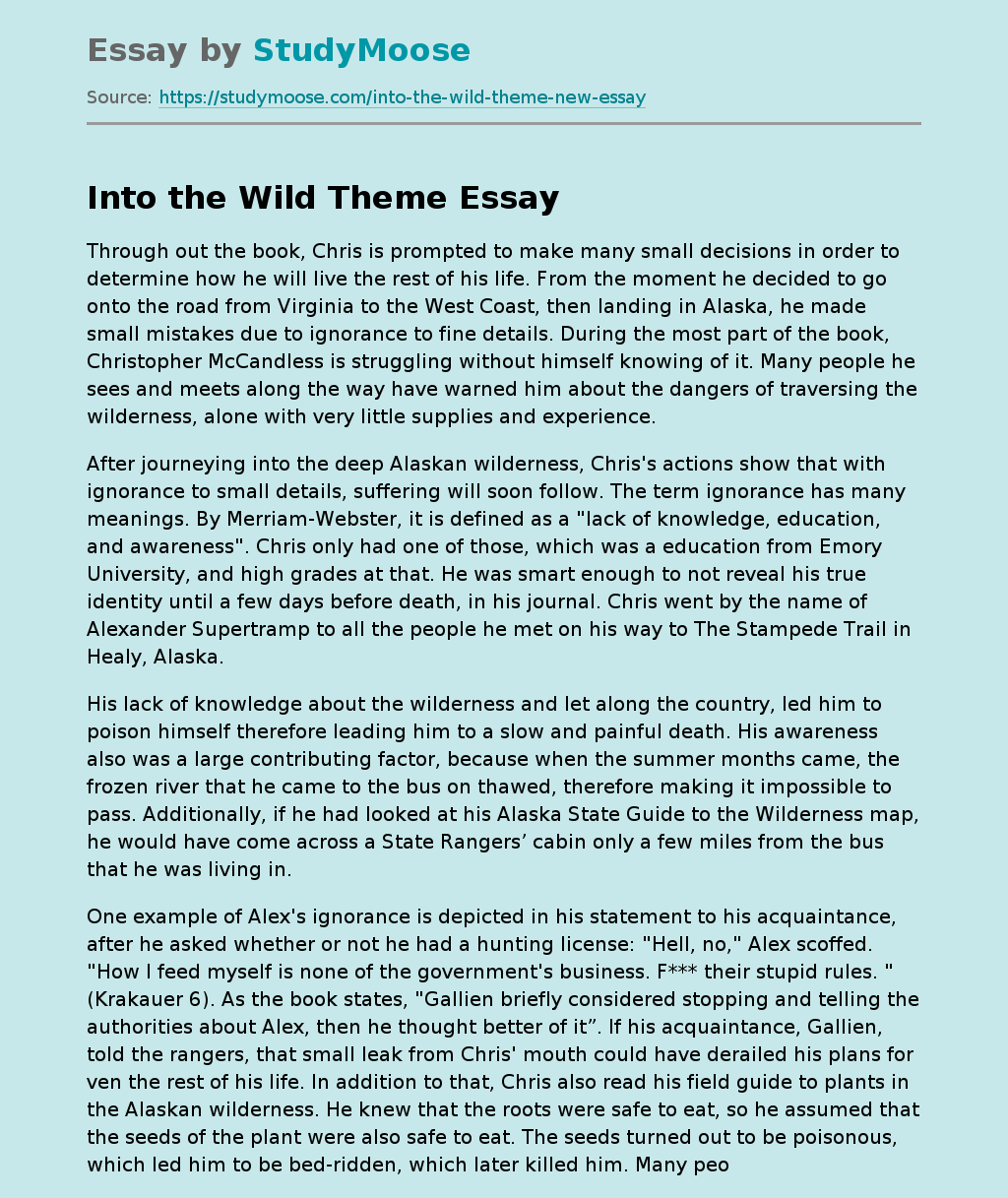