Into The Wild: Life of Chris McCandless

“And though you think the world is at your feet, it can rise up and tread against you”-Ian McEwan, Atonement. Into The Wild, written by Jon Krakauer discusses the life of Chris McCandless. Chris McCandless, a 25 year old, was an independent, spontaneous adventurer. Most outsiders would say he lived the American Dream, with seamlessly perfect parents. But life isn’t always as it seems, there was a dark underside to Chris’s life and this ultimately lead to the decisions that were made, in the Alaskan Wilderness.

Don't use plagiarized sources. Get your custom essay on
“ Into The Wild: Life of Chris McCandless ”
Get custom paper
NEW! smart matching with writer

Chris, a reckless green horn, was driven by impulse, and allowed his optimism to get the way of preparation.

McCandless was optimistic about surviving in the Alaskan Wilderness. He had thought about how his journey would go as planned, nothing wrong would happen and because of this he couldn’t see the bigger picture and plan out things that could’ve possibly gone wrong. McCandless buys supplies such as a bag of rice, he didn’t plan out how it would get cooked, and it was just his luck that a bus would be out there with a gas stove.

It’s also known that he bought a plant book and was told “There’s two foot, three foot of snow on the ground. There’s nothing growing yet.”(Krakauer 159) Although he knew this information he still went into the wild thinking he could find edible plants to eat. McCandless’s lack of patience and optimism was a big cause in why he didn’t survive.

Although, optimism is a big issue, this also caused him to lack preparedness. Chris did little to no research of where he was going and didn’t buy the correct equipment needed. “His gear seemed exceeding minimal for the harsh conditions·…Alex’s cheap leather hiking boots neither waterproof nor well insulated. His rifle was only .22 caliber··”(Krakauer 5) Chris knew he was going to Alaska but brought cheap items and a small gun that can only kill small game. As stated above, he didn’t know there was a bus in the location he stayed, he got lucky. In addition to this, Chris also failed bring basic essentials, ” No ax, no bug dope, no snowshoes, no compass. The only navigational aid in his possession was a tattered state road map he’d scrounged at a gas station.” (Krakauer 5) Chris knew he would be out there for a while and didn’t bring these things that would aid in him surviving for a while. Had he explored his surroundings well, he would’ve been able to return to civilization.

Furthermore, Chris’s impulsive nature and hastiness hindered him from surviving. McCandless so quick to get away from his parents burned his money, social security card, donated $25,000, and abandoned his car. Without the money he couldn’t buy food and he hitchhiked from place to place which put him in danger. He also acted on the thought of having the ability to survive in the wilderness with little to nothing. Finally because of his hastiness he went into the wild with no skill on how to survive, let alone researched on how he would.

In conclusion, Chris McCandless was an unprepared adventurer, that was impulsive and optimistic. These faults account to why he didn’t survive or escape the Alaskan wilderness. If he prepared more or explored his surroundings he would still be alive today.

Into The Wild: Life of Chris McCandless. (2019, Dec 08). Retrieved from https://studymoose.com/into-the-wild-life-of-chris-mccandless-essay 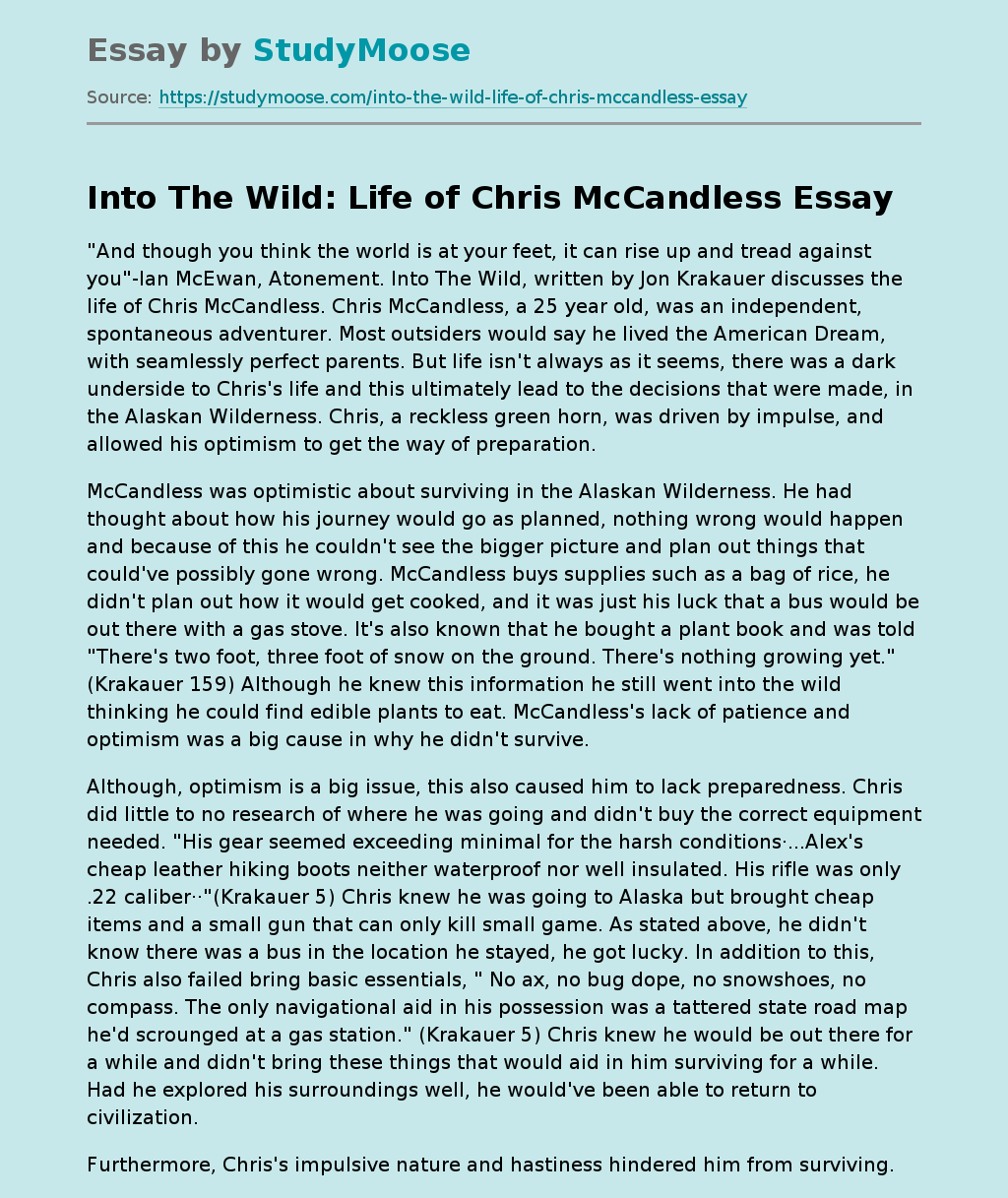