Into the Wild is the story of a young man which has been transformed into a novel, written by Jon Krakauer, and a movie, directed by Sean Penn. It follows the journey of Chris McCandless, a 22 year old man, who left civilization to live in the wilderness of North America. Both Krakauer and Penn were greatly inspired by Chris McCandless and were eager to learn as much from him as they could. Their interpretations on McCandless’s story are not always the same and they portray their ideas in very different ways.

Don't use plagiarized sources. Get your custom essay on
“ Into the Wild – Jon Krakauer & Sean Penn ”
Get custom paper
NEW! smart matching with writer

This can be seen clearly in the “moose killing scene”. This extract shows the killing of a moose and the aftermath when McCandless tries to save all the meat. It is the moment of one of McCandless’s biggest achievement and worst mistake. It can be argued that Penn is more successful at clearly showing McCandless’s remorse after killing the moose which is portrayed through the use of symbolism, the reasons McCandless failed to salvage the meat through the use of editing, and the tension and stress of saving all the meat which is depicted through auditory imagery and diegesis.

Both the novel and the film use symbolism to religious allusions to show the different feelings McCandless is going through after he kills the moose. Symbolism comes up near the very beginning of the movie scene, whereas in the novel it comes close to the end. In the film version once McCandless gets to the heart of the moose he holds it in a position of reverence, showing deep respect to the moose and the food it will give him.

Shortly afterwards he tries to wash the blood off his hands in the river.

This demonstrates a sudden change in McCandless’s mindset and shows how McCandless is trying to purify himself and wash away the sin of killing the moose. Having these scenes back-to-back shows just how quickly McCandless regrets his decision. In the novel, instead of using symbolism to see McCandless’s regret we see it while he is reflecting on the past, “I am reborn. This is my dawn. Real life has just begun.” (p.167). These religious allusions to pilgrimage show McCandless is trying to find moral or spiritual significance in his failure of salvaging the moose. Instead of feeling regret, the readers feel as though McCandless has come to terms with killing the moose. This may be because McCandless, for the first time, did not succeed and instead of remorse or regret he is feeling angry at himself. Penn shows how sad McCandless is at taking a life whereas in the novel is seems as though McCandless is more angry at himself for not succeeding in salvaging all the meat.

An important element the readers do not have in the novel is just how hard it is to salvage the moose which was ultimately a reason of McCandless’s failure. The labor and hard work as well as the large amount of meat and very little time McCandless had are all reasons he fails. In the movie, Sean Penn edits the movie so that numerous short clips are connected together to show the different stages of salvaging the meat.

This not only demonstrates the number of actions McCandless had to take to keep the meat from spoiling such as: cutting the moose, gathering materials to make a smoker, curing the meat… but also how McCandless had to balance everything so that he did it in the shortest time possible. The short clips also show how strenuous the work was and how much effort had to be put into every step of smoking the meat. In the novel the readers are able to see what McCandless has to do to preserve the meat with a step-by-step guide:

From this extract the readers cannot understand the intensity and labor that was needed as it is so factual and to the point. The lack of descriptions and details reduces the perception the readers have of the size of the undertaking and therefore reduces the tension of this extract.

Auditory imagery and diegesis act as a bridge between the movie and the audience, the novel and the readers intensifying the stress McCandless was under when salvaging the meat. Sean Penn uses many more examples of auditory imagery which increases the tension the audience experiences. When McCandless starts to cut the meat there is only the sounds of the meat being ripped and sawed through. The noises are so striking and clear that they create disgust and unease in the audience. As soon as the meat is smoking, a minor key, high pitched oboe and string instrument plays.

Although it is background music, this creates unease and tension as humans perceive these sounds as scary or highly unpleasant. As time wears on and McCandless is still cutting up the meat the sound of flies arrive and intensifies over time. This signifies that time is running out and the tension increases as the audience anticipates what will happen to the moose. The music mixed with the sound of McCandless cutting and ripping the moose meat and the buzz of the flies increases the tension and makes the scene uncomfortable to watch.

Three examples of visual imagery are used in the movie version but only one is used in the book, “He butchered the carcass under a thick cloud of flies and mosquitoes…” (p.165). Although the readers can imagine the drone of flies and mosquitoes there is no development of the statement and it ends there. This results in unease unable to build up, therefore, there is no tension. Although it is easier to use auditory imagery in a film, the novel does not use it in a strategic manner so it is not evident to the readers how stressed McCandless was when salvaging the meat.

Both the film and novel use a lot of the same techniques, nevertheless, Sean Penn uses them more effectively to show a complete summary of the crisis Chris McCandless experiences. The use of symbolism, editing and auditory imagery has the audience go through the past, present and future. The life of the moose is the past, the work and labor to save the meat is the present, and the tension builds up creating anticipation in which the audience wants to know how the events unfold- the future. All of this coming together to create this critical scene is the reason Sean Penn is more successful at showing this passage. 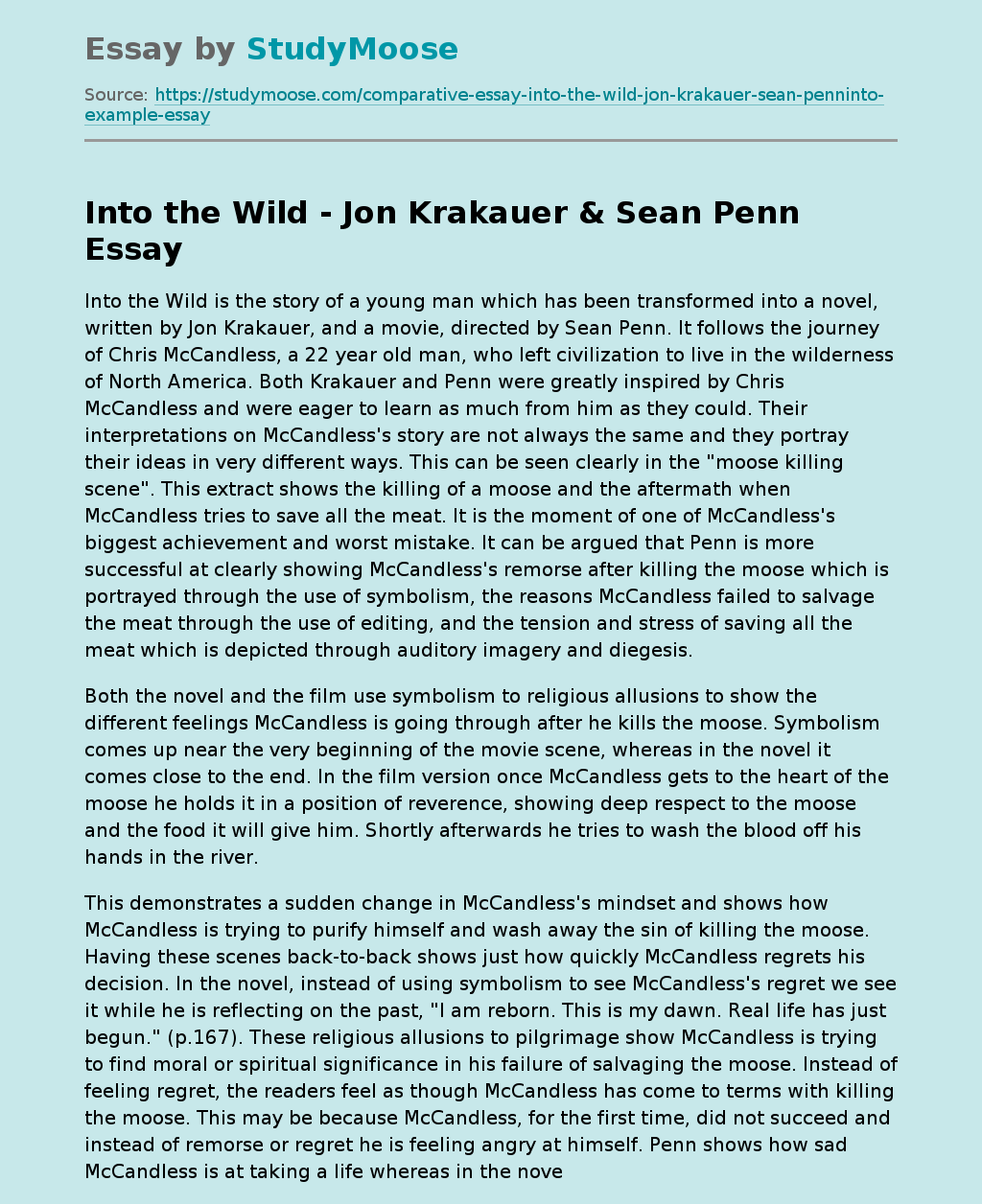