The Florida Project by Sean Baker

In the film The Florida Project, Sean Baker does great work showing the world how we find poverty in even the most magical places in America. This film is about the story behind a family of two who live day to day in motels in the happiest place in Florida. When people think about Florida, the first thing that comes in mind is the happy, magical place which is Disney World. Moonee is a little girl growing up living in a motel room alongside her young mom, Hailey.

Don't use plagiarized sources. Get your custom essay on
“ The Florida Project by Sean Baker ”
Get custom paper
NEW! smart matching with writer

As we get introduced to this family we can’t help, but sympathize for the family for the injustice they face. Sean Baker does a great job not exploiting the poor in this film creating sympathy as we get a variety of stories in this film. Despite the condescending reality other films give off on the poor, Baker uses his skills to produce a hybrid film were the scenes create a non-narrative and narrative at the same time.

He uses this skill to produce the real meaning behind the poor as he creates a story that resembles millions of people.

The scene we are going to go deep in is the story were Hailey is being confronted by the child’s service agents to discuss her parenting. As the scene begins we are set by the camera being at a low angle as the Moonee and her best friend are rocking up and down. The camera only shows as each one of them goes down to resemble the meaning to represent how the girls are only failing through this injustice system.

As the state receives much wealth from their attractions, they still see the repo cautions of a failed system. Despite the billions of dollars, the state of Florida passes through a year, they still have a system were many families part takes on a day to day basis. Despite the system failing these girls they still create their own magic as they play around every day in their own little world. Moonee then stops to see what was going on up in her room as she hears her mom screaming at a pair of child services agents. Once the children are on the second floor the camera zooms out of the focus on the confrontation feats away from the girls, and places it behind the girls at eye level. Reason behind the unfocused shot of the confrontation was for the audience to be bewildered and confuse as we don’t quite see what’s going on. At this angle, the audience are combed by emotions to sympathies with Moonee as we play a parental role to take care of Moonee as she witnesses her mom getting confronted by these agents. Booby, who is the motel’s manager springs into action as he keeps Moonee calmed and settled away from the conflict.

Booby plays a role much greater than as manager, because he goes through a lot of trouble to help this people live their daily lives. He’s more than a debt collector or a fixer, he is shown out through the film as a parental for not just the kids, but for guest. He is the one who mediates the pain from people that he connects with through his daily job roles. As he sends Moonee’s best friend home, the director choses a dutch angle view of her walking home to portray a curiosity to the viewer to portray the friend as homeless as she walks from side to side wearing clothes that are dirty and used. As she walks home we are also experiencing the sounds of the creek animals and the outgoing noise of a helicopter moving away from the area. Baker usage of the lake is set to divide the slums were these families stay to the tourist that experience the magical setting of Kissimmee, Florida, home to the most magical-Est place in the U.S. The outgoing chopper goes the opposite way of the swings they girls were at to represent the farter and harder life is going to be for these kids who live in this poverty state at the moment. Despite all odds stacked against them, they choose to live in a world where they create their own rights.

As the film reaches its end, we are met by a track shot that follows Hailey and Moonee through the motel as they get back from breakfast. Through the background shot we are able to notice the police vehicles taken notice by Hailey; we already know something is about to happen and it doesn’t look good. As they are walking towards their apartment the camera is close up on Hailey as you can see her discomfort. She knows what is going on, so her expression is negative as she knows there is something terribly wrong since there are police vehicles outside the motel. The camera then switches to Moonee who is shown staring off and dosing off in an innocent way. The audience sympathies as her innocence does not seem to be bother by the harm around her. She’s living her best life, stress free not aware for what awaits her which is the reality that is about to crash her magical world. Moonee comes to realize she is about to be taken by child services and away from her mother and she loses her mind as she runs away to meet her best friend.

Once at her friend’s house Baker uses a sound editing as the next scene shows the two girls running away through the magic of Florida. Reason why it is a sense of fantasy because it is impossible for the girls to get so far and access to Disney World’s Magic Kingdom. The sound usage also creates a sense of thought as it has a predicament feel toward it. Baker creates a personal connection as we see the two girls running through the crowd of people enjoying their time at the Disney theme park. The girls running through the crowds of people is a metaphor of the hidden truths that lie in the happiest place in America. The girls are a resemble of the millions of Moonee’s that wish to be near the most magical place in the world. Baker ends on the theme that everybody regardless of the social structure which is; “Find Your Own Kingdom”.

The Florida Project by Sean Baker. (2021, Oct 08). Retrieved from http://studymoose.com/the-florida-project-by-sean-baker-essay 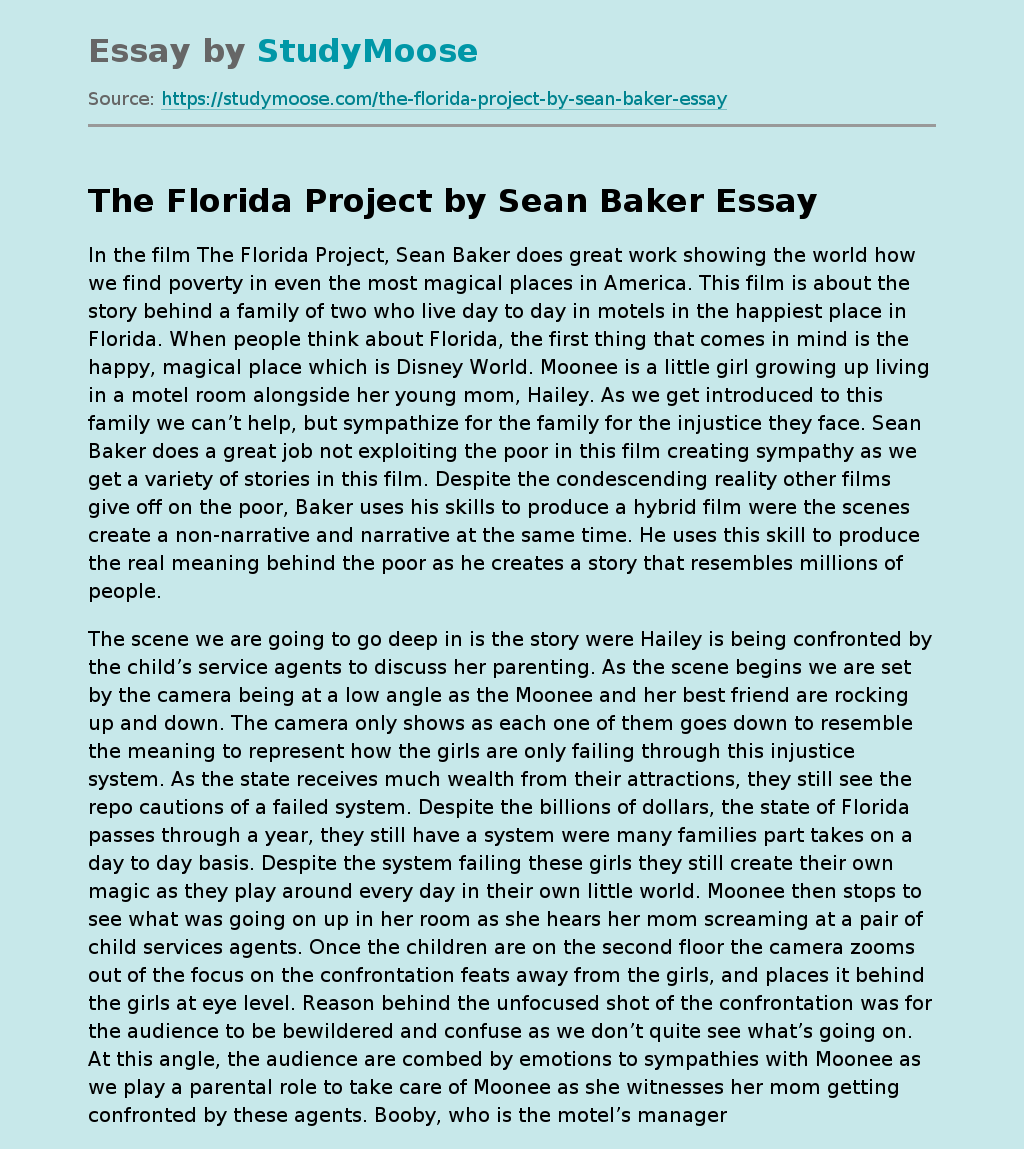