In the excerpt from Barbara Ehrenreich’s, “Serving in Florida,” Ehrenreich is dissatisfied working lengthy hours at an underpaid job. At the Hearthside, Ehrenreich must keep busy at all times, even when there is nothing to keep busy doing. All of the employees are forced to abide by ridiculous guidelines set forth by a manager who spends his time sitting all day doing absolutely nothing, or yelling at others for doing just that. Because her pay does not cover all of her expenses (rent, gas, food etc.

Don't use plagiarized sources. Get your custom essay on
“ Barbara Ehrenreich’s Research in Serving in Florida ”
Get custom paper
NEW! smart matching with writer

) she is forced to seek another job. She applies and calls numerous places until she finds another serving position at a place called Jerry’s. Compared to the Hearthside, Jerry’s is disgusting. Ehrenreich encourages the reader to imagine it as “a fat person’s hell.” She goes in depth about the conditions under which she is forced to work: bizarre smells, clogged sinks, and sticky counters. For two days she attempts to work both jobs, a morning shift at Jerry’s and the evening at the Hearthside; The latter may be a clean eating establishment, but Jerry’s is by far more popular and would bring in more tips.

She chooses to resign from Hearthside, and to the surprise of many staff members at Jerry’s, she returns for a third day.

Although Ehrenreich is concerned for her own financial and living situations, she spends a large portion of the excerpt describing the lives of her fellow coworkers. Her main concern, obviously, is underpaid employment.

The multiple characters mentioned all seem to be struggling with money and maintaining a place to live. For example, a woman named Tina is staying with her husband at the Days Inn for $60 a night. Another is living out of her van, which she parks behind a shopping center at night. The Haitian cook shares a two-room apartment with his girlfriend and two strangers. Gail rooms with a male friend, who she is desperate to get rid of, but can’t do so because she wouldn’t be able to afford the rent otherwise. This short excerpt has raised awareness, to me, that the situations depicted by Ehrenreich are realistic. This can be proven by the footnote on page 133, which states that “nearly one-fifth of all homeless people are employed in full-or part-time jobs.” 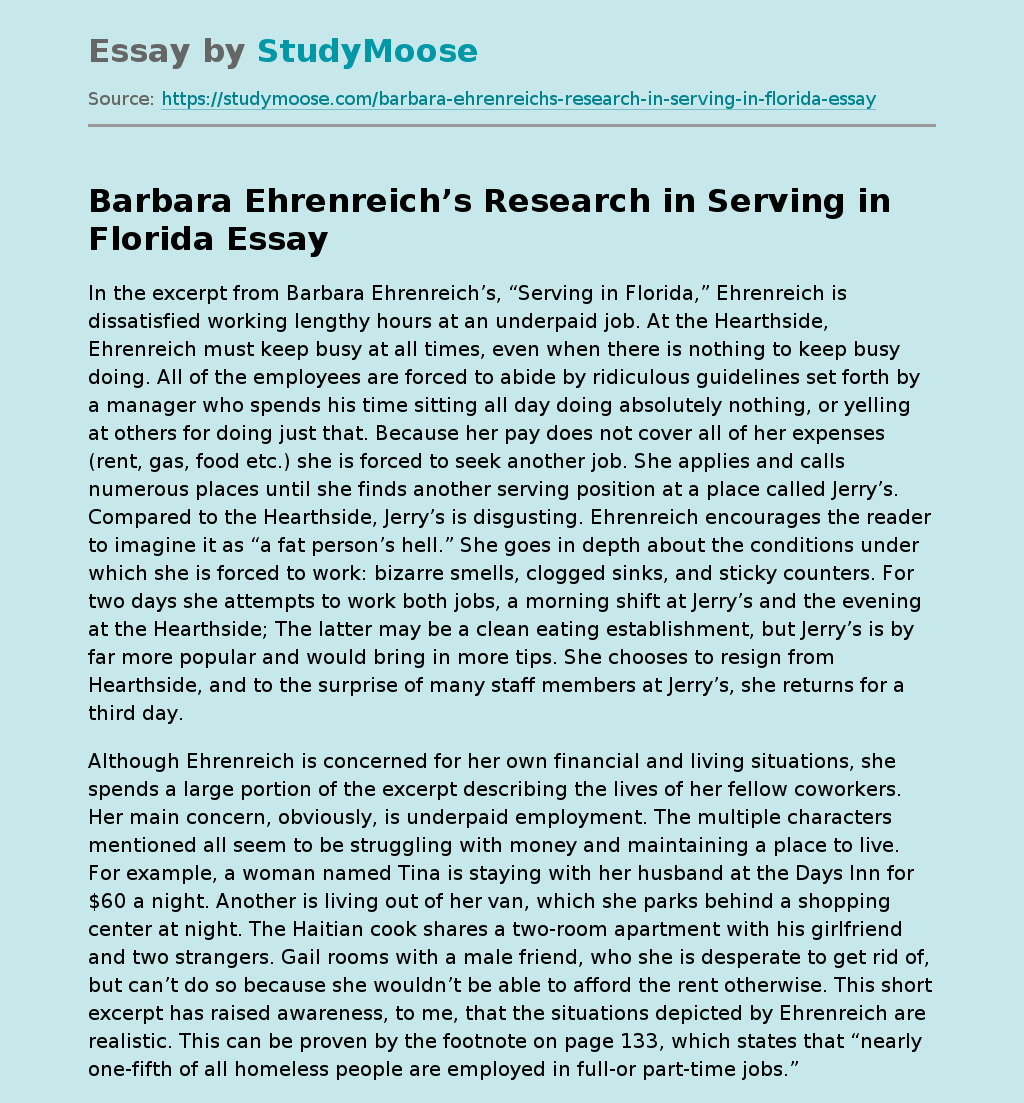