Five literary elements in "The Winner" By Barbara Kimenye

Barbara Kimenye’s “The Winner,” is an excellent example of a short story that does not necessarily use all five of the literary elements to their fullest potential, but still creates a sense of organic unity. In this analysis, the elements are organized in the order of theme, plot, characterization, setting, and then structure. Each element will be described and then “The Winner” and the events in it will be related to the elements.

The purpose of the theme of a story is to provide insight to the reader about the author’s point-of-view on the topic they chose to write about.

Don't use plagiarized sources. Get your custom essay on
“ Five literary elements in “The Winner” By Barbara Kimenye ”
Get custom paper
NEW! smart matching with writer

Theme can be communicated in two ways, both of which Ms. Kimenye utilized. One is to reveal the theme directly through a statement that a character makes, and the other is to allow the reader to interpret the theme based on the actions and reactions of the characters. She relates money and happiness throughout the story to convey her theme.

Her use of description through the characters stressed her point very clearly. She used the right symbols, such as people, in the proper way to help the reader understand the purpose and meaning of the symbol. Overall, the way she incorporated the theme into the story could be considered to range from good to excellent.

The plot of a story should have an element of suspense and irony in it to make the reader want to continue reading. It should also include at least one major complication, that is, the protagonist or another character is blocked from doing what they want to do.

While all of this is going on, the order or events and relationship between events still has to make sense to the reader. There was a great deal of irony presented in the end of the story when Pius ended up changing his opinion of Cousin Sarah and marrying her, which the reader didn’t expect. Barbara Kimenye also kept the events in the story organized by some form and made it very simple for the reader to understand what was going on. While she fulfilled most of the characteristics of a good plot, one seemed to be lacking. There could have been more tension between characters present in the story.

Ms. Kimenye made wonderful use of the element characterization. In short stories, not much depth is required as to the character’s personalities. It is only required that any reader be able to connect with one character. However, in this story, one seemed to know Pius’ personality and by the end, could almost predict what his reactions would be to events.

The setting in this story was somewhat described literally, but most good authors try to make a touch on figurative settings also. The setting is the conditions prior to the story, and should be described in clarity and detail. In this selection, one had a general idea of Pius’ surroundings, but no information presented was ever extremely detailed so that the reader could make a distinct picture in their head.

Finally, the structure of a short story should always be fictional and written in prose. It should also contain no more than one plot and should be based on the plot rather than the characters. Short stories do not usually use all five literary elements clearly and with a great depth, although they are still present in some form. Ms. Kimenye chose a structure to write in at the beginning of the story and, for the most part, she stuck to all of the guidelines with it, although some things she did in the story may have been pushing it a little bit.

Five literary elements in "The Winner" By Barbara Kimenye. (2016, Jun 21). Retrieved from https://studymoose.com/five-literary-elements-in-barbara-kimenyes-the-winner-essay 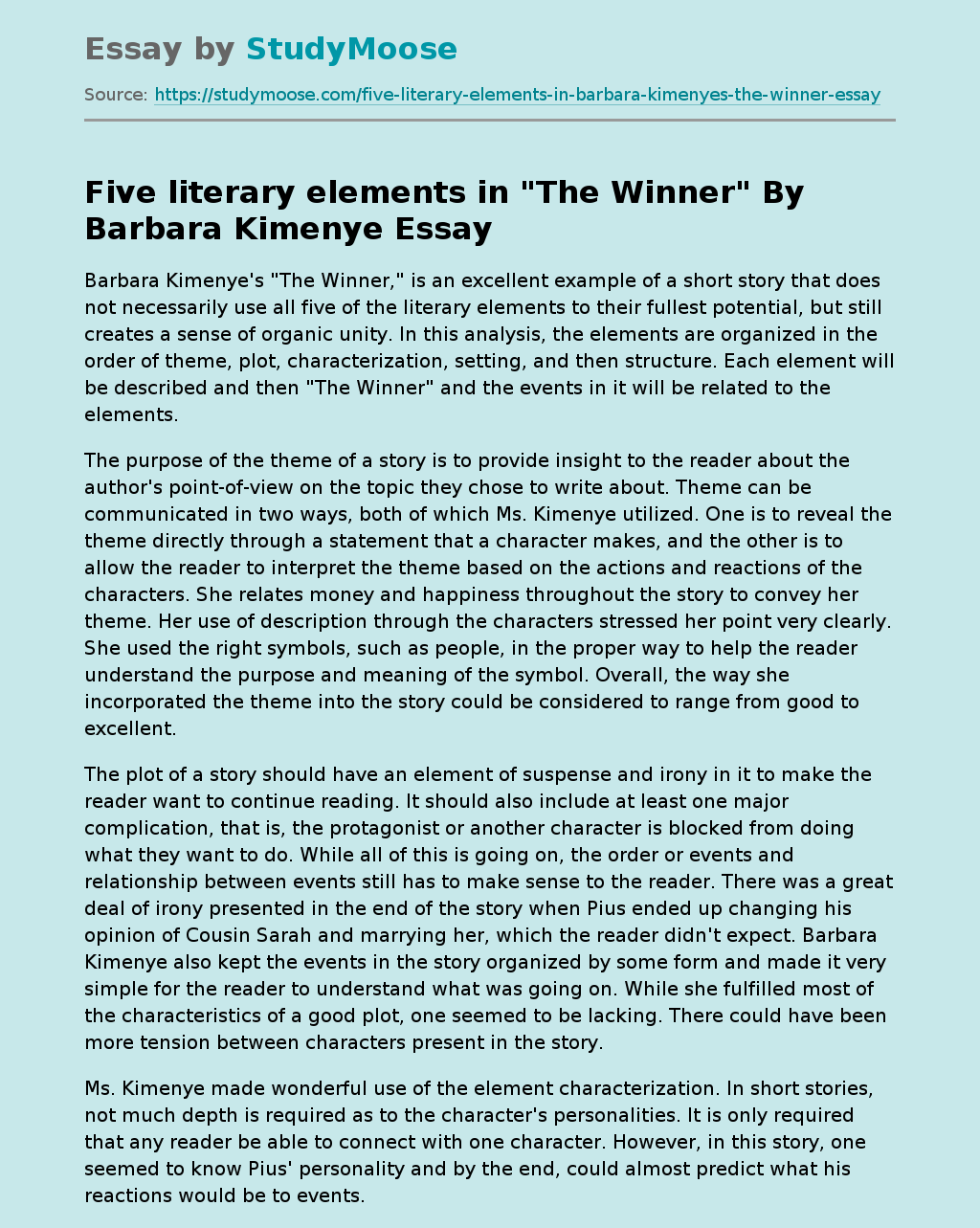