The marginalisation of the female protagonist begins with the title of the story and stays true until the end. For the majority of the story she is referred to as “Squeaker’s Mate”, “she”, “her”, and “his mate”. When she becomes gravely injured the men of the small outback Australian settlement caution Squeaker against informing her the injury is permanent, because it might to damage to her feminine sensibilities. A page later and Squeaker says to his prostrate partner when she says she will be up soon to help around the home again: ”Yer won’t.

Doctor says that means back’s broke, and yer won’t never walk no more. No good not t’ tell yer, cos I can’t be doin’ everything’. ” The Australian brush, always harsh, was particularly dangerous during the late nineteenth century, when Barbara Baynton’s story, Squeaker’s Mate, is set, and doubly or triply so for the women.

It was a hard life, and if you survived the first few years, you were aged before your time. Squeaker’s days are filled with building his home and staking his claim on the land, and his nights are a swill of brandy and cheap(er) liquor from the store.

His mate – who provided themoney to set up the property – is a burden except when she is working, and when she works, she works hard. The accident, which leaves her crippled, is a tough economic blow.

Squeaker compensates by hiring a woman to assist around the place, which is short-hand, for those times as well as (too often) our own, for securing a new “mate”. At first, this new woman – who remains, it is important to note, unnamed throughout the text – is a help, but she soon becomes a rival. Too soon for the original mate’s liking, who doesn’t care much for the new girl: She was not much to look at.

Her red hair hung in an uncurled bang over her forehead, the lower part of her face had robbed the upper, and her figure evinced imminent motherhood, though it is doubtful if the barren woman, noting this, knew by by calculation the paternity was not Squeaker’s. She was not learned in these matters, though she understood all about a ewe and a lamb. Squeaker is an unpleasant fellow, clearly unintelligent, clearly imperceptive to his mate’s needs. He is the prototypical stoic male, calm and selfish in the face of another’s adversity.

In a noteworthy paragraph immediately following his mate’s crippling, upon asking for her pipe to calm her nerves, Squeaker retrieves, fills, lights and puffs on his own pipe before attending to her, all while she lies bleeding and paralysed on the ground. Moments later, he is annoyed when she refrains from moving her (again, paralysed) arm from the fire when her sleeve catches alight. Squeaker’s mate’s name is Mary, which is itself a reductive name as it carries little individuality, and there’s no last name attached to it. Mary is like John or Bob, it’s a featureless name, imprecise in its characterisation.

Externally, she remains indistinct, with neither her hair colour, her body shape, her fashion sense, her physical mannerisms, ever described. She is quite simply Squeaker’s mate, and deserves no more or less than that. Or does she? In the world Baynton is describing, this is exactly how she would have been perceived. Many woman during that period in that area were considered to be factories for producing babies, and on top of that they were machines for cleaning and cooking. They were not an equal companion, and there was little expectation that a man or a woman had much to share with one another.

It was not uncommon, as an example, for the man to leave for days and even weeks at a time, herding sheep and chasing down livestock, or following the weather in search of jobs on other farms both near and far. A healthy woman could take this opportunity to become quite entrepreneurial with the family home, haggling over prices and selling the farm’s commodities at a good price. But a crippled mate was a serious liability, virtually useless, and it is not surprising when Squeaker neglects to call the doctor until his hand is forced. While the outer life of a woman in the brush was not much, their inner lives could be very great indeed.

The journals of Fanny and Bessie Bussell, to take one of many examples, were an account of their lives during mid nineteenth century Western Australia, and reveal these women as funny, creative, clever, playful, anxious, forthright, honest and open. Their journals were for them conversations with family back home, a way to connect with people they love. For us, they are historical artefacts and useful for their account of rural life during that period, but they are something more, too – they are living documents, pulsing with freshness and energy, marvelling at the wonder of the strange new land to which they had arrived.

Squeaker’s mate – Mary – may not have written any letters, but her thoughts as described by Baynton show her to be resourceful and tough, and astonishingly perceptive in regards to the emotions and motives of others. She is a strong woman, undaunted by her injury though naturally affected by it, and she is aware that her fate is grim should the new mate be accepted wholly by Squeaker. Mary does what she can to turn the situation to her advantage, with surprising, violent and elemental results.

Squeaker’s Mate comes from, I will freely admit, a literary lineage of which I am not particularly fond. The dusty, dry, poverty-striken, dialect speaking, naturalistic nineteenth and early twentieth century literature is an anathema to my tastes, and is, for the most part, terribly unreadable today. Far from just being unfashionable many of these stories are impenetrable, relying too heavily on the expectation that the reader will fully grasp the physical realities of the story and relying on local colour and descriptions of animals and dirt to carry the story along.

Squeaker’s Mate rises above the muck thanks to its incisive examination of the gender issues surrounding this tumultuous period of Australian history, when men were forging new paths into the nation, discovering resources and establishing cities and towns and women, equally responsible, equally culpable, equally capable, and equally proficient, were dragged thanklessly behind, forgotten too often, their stories lost, lives vanished. 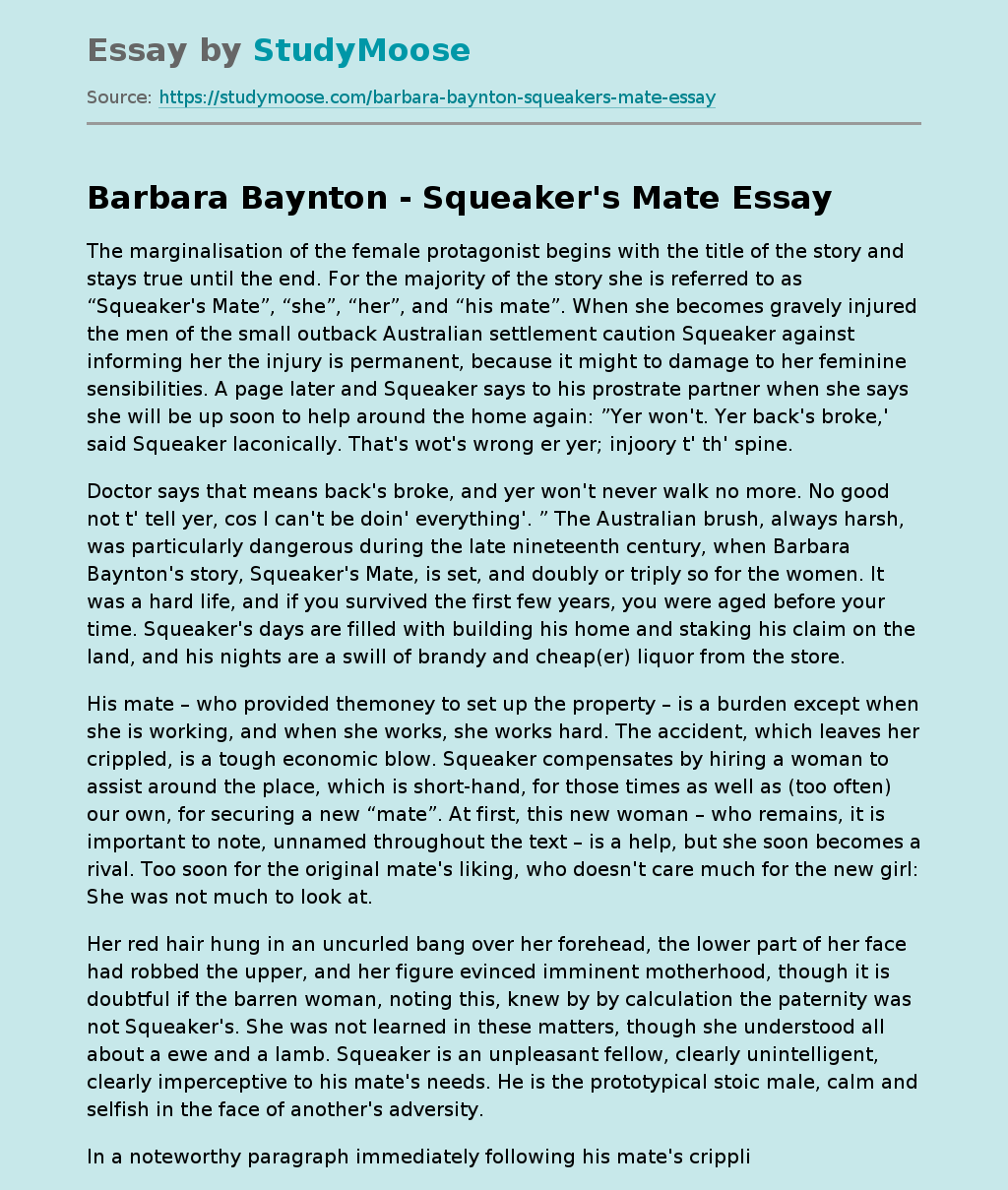