Response: Get a Knife, Get a Dog, but Get Rid of Guns

Molly Ivins, a liberal columnist who was made famous by picking fun at her home state of Texas and mocking politicians, battled breast cancer before she died in 2007. Although her essay, Get a Knife, Get a Dog, but Get Ride of Guns is over a decade old, her words are still a hot topic today. Molly Ivin’s essay takes on the gun control debate, engaging the audience with a sarcastic perspective that leaves them asking themselves if they just read an entertaining satire or a convincing and thoughtful piece.

Don't use plagiarized sources. Get your custom essay on
“ Response: Get a Knife, Get a Dog, but Get Rid of Guns ”
Get custom paper
NEW! smart matching with writer

Even though good points were made as to the reason why guns are bad, not everything was easy to agree with. Molly Ivins supports her reasoning to get rid of guns with entertaining exaggerations, some confusing back and forth views, but also her humor and momentum. She begins by emphasizing she is not “anti-gun”( Paragraph 2). Immediately after that she makes sure to announce she is “pro-knife”, this was the first ripple in the water that confused me as a reader.

Was she attacking the gun owners making fun of the expression bringing a knife to a gun fight? At first I thought she would have a similar view with the Mexican Restaurant, Chipotle. Boring yet safe Chipotle expressed their unbiased view by asking the gun owners to politely not bring assault rifles around them. In doing so they do not completely lose their gun owners sales. I think she was using a similar tactic to secure some readers from not just throwing the book away at first glance.

Unless she was using this as a slap in the face to the gun owner’s stupidity and a quick chance to get a laugh from the “knife advocates”. Ivins continues with a view against guns and in favor of knives, which would “promote physical fitness” as she says a person would have to chase down their victim and catch up to them to stab them. She compares this to the obesity issue in the US by making fun at the relationship between lazy obese people and the relative laziness of using a gun compared to a knife. But the cold hard truth is some people are just faster than others.

The slow people would end up reverting to their couches having no reason to run as they would just get caught anyway. Her point that “knives don’t ricochet” addresses her idea of knives being more accurate weapons, but also introduces her take that knifes have fewer mistakes. This brings up the thought of what kind of knives we are exactly talking about. Has my mind gone off topic thinking about throwing knives and jousting knives now? If I was held at gunpoint and two heroes came to save me from the bad man I would much rather trust the hero with the precise handheld gun over some shuriken wielding assassin. She goes on to quickly mention the tragic outcomes of accidental shootings. After Ivins further demonstrates her humorous and sarcastic side in the first half of the essay, she shifts her tone to a more serious attitude in the second half. The second half of her essay starts with her declaring her frustration for gun laws and the people carrying the guns themselves.

She claims that guns just like cars, are known to “wreak great carnage,” but are still legal, even for the people without “enough common sense” to use them properly (Paragraph 8). She addresses the counterargument that cars are just as bad as guns, but no one questions whether they should be legal. She responds to the argument with the point that at least cars have some other use than violence, which is the only purpose of a gun. Washington DC was thinking the same think when the Supreme Court banned handguns in DC in 2008 the decision between keeping a handgun at home for defense was enormously controversial (the uninfringed). But the court’s conclusion has generally been accepted in the real world because the ruling was in favor with Americans’ rights to own guns. Unlike the underlying message provided by Ivins, the message that this ruling made was setting precedence for the rest of America to follow.

“The Supreme Court’s decision in this case will be extremely significant the most important decision on guns in nearly 70 years and maybe the most important ever regarding the second amendment,” said Paul Helmke, president of the Brady Campaign to Prevent Gun Violence.” Paul has a point, I think what happens in DC does not stay in DC. Ivins does a good job addressing her opinion and explaining her side on the issue at hand. Starting with some sarcasm and humor that faded into seriousness was a good technique to engage her audience. Had she started the essay by saying “Ban the damn things,” she’d have immediately lost a large part of her intended audience. But I think if she involved at least one statistic to hook the reader and detail how seriously dangerous guns are in the house her point might have left a deeper impression on me.

Firearms were associated with more than 240,000 deaths from 2000 to 2007, including homicides, suicides, and unintentional deaths (Vernick). That is more than 34,000 thousand per year and these aren’t including cold blooded murder. She forgets to just mention this. Her essay was very fun to read, but has no concrete facts to back up her thoughts on gun control she uses persuasive humor and evolving ideas to keep her readers interested. Ivins argument was based on bias assumptions and flawed examples that caused her argument to decline the more I read on. Ivins tries to argue using pathos, logos and ethos. “As a civil libertarian…” (Paragraph 4) Ivins uses ethos to give herself credibility. She calls herself a ‘civil libertarian’ this gives the reader the impression that she is someone worth listening to and can teach us something. Ivins use of logos is awesome.

“A well – regulated militia… shall not be infringed.” (Paragraph 5) Her direct quote of the second amendment gets readers thinking. And her use of the name “Thomas Jefferson” in paragraph 6 helps to strength her argument. Readers will begin to wonder and question whether this is how our countries founders wanted things to go. Ivins alludes to the common pro-gun phrase “guns don’t kill people” is “patent nonsense.”(Paragraph 11) She then directly contradicts her own argument in the next sentence with a rhetorical question. Although her intent was to make clear she understands both sides I think she blew her cover a bit. She doesn’t even try to understand or break down opposing arguments with any depth. If the intention of the author is to entertain readers with similar views, as opposed to convincing the masses, the article is probably a success depending on the audience.

Is there no longer the need for guns in this society?

Response: Get a Knife, Get a Dog, but Get Rid of Guns. (2016, Apr 01). Retrieved from https://studymoose.com/response-get-a-knife-get-a-dog-but-get-rid-of-guns-essay 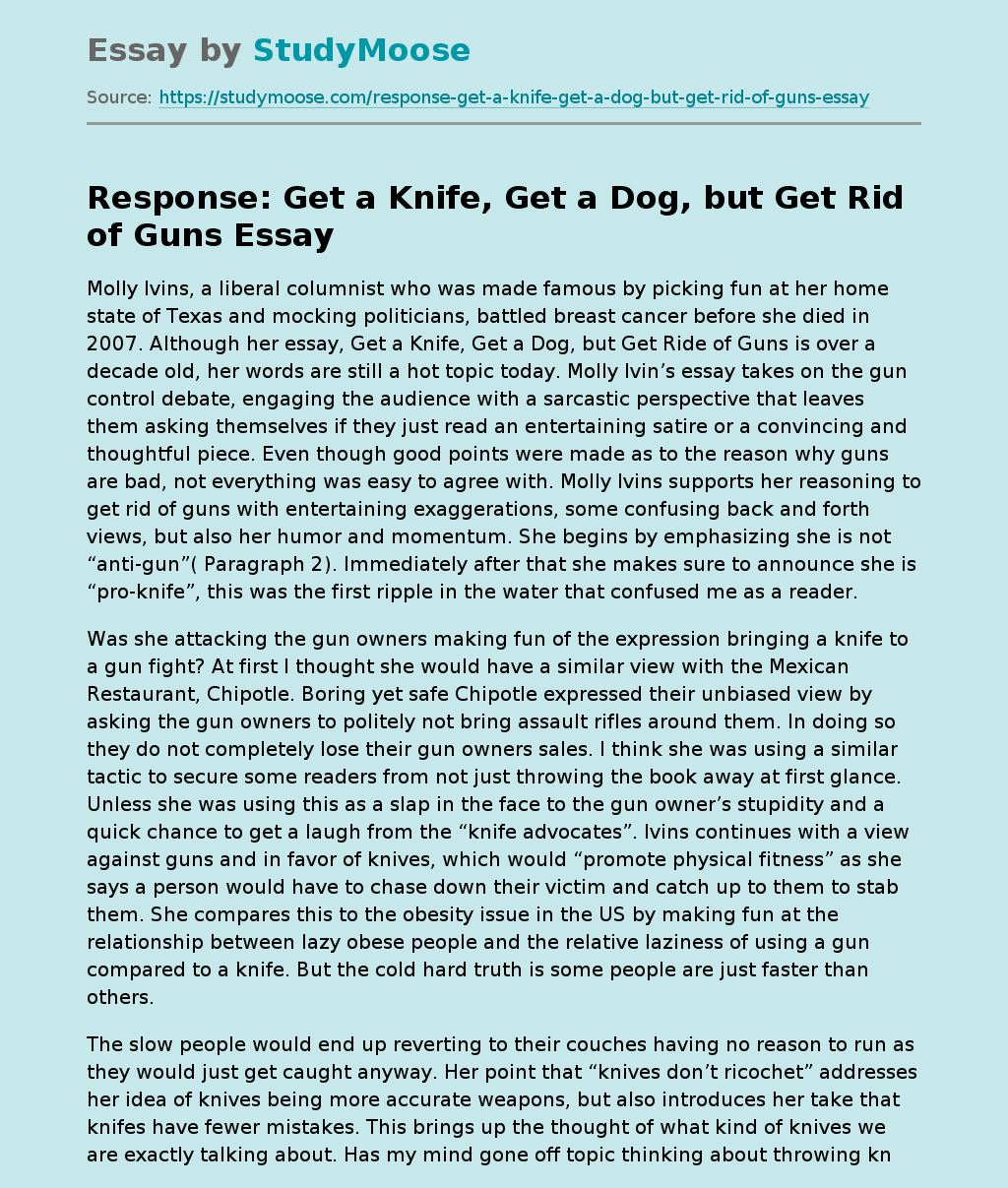