How To Use Advocacy?

Every body at sometime in their lives will need an advocate of some description. Every individual can act as an advocate whether in professional support or support of a friend. Special training is not needed to be an advocate in most cases, just the ability to be able to communicate effectively in support of someone else. In the early years setting the people needing an advocate could be the children, parents, staff and outside agencies such as social services. There are many reasons for the need of an advocate.

Don't use plagiarized sources. Get your custom essay on
“ How To Use Advocacy? ”
Get custom paper
NEW! smart matching with writer

A lack of confidence in oneself often creates a need for an advocate.

Many people feel unable to communicate effectively and feel they may not be able to put the point across suitably. A fear of other individuals can create a situation where someone may not be able to support themselves and feel the need of support from an advocate. Sometimes it may be a situation of someone being unwilling to speak for themselves and the use of an advocate may be required.

It could also be language barriers which prevent someone speaking for themselves. Either not being able to speak the language or have speech problems or hearing impairment are all indicators of the need of an advocate.

In the early years settings the most often represented individuals would be children. Staff and adults need to speak up for children and empower children to speak up for themselves. Children will feel unhappy, angry or worried about things and need to be able to express themselves.

Staff in a school are able to teach the children how to express these feelings thus empowering them to help themselves. They may not have the necessary language skills to represent themselves and the use of an advocate would be needed. At home a child has their parent to speak up for them or act as their advocate.

Members of staff have the responsibility for this when children spend time in their setting. When children enter into an early years setting they may feel nervous shy and attach themselves to one member of staff. Children may not feel confident enough to speak to other members of staff and only tell their key person their needs. This information could be passed onto other members of staff via that key person, their advocate. An advocate is not bound to pass on information to support an individual, it may be just being there to listen and talk through problems is all that is needed in support.

Confidentiality is also to be taken into consideration, does the child want the information passed on to others. Of course if the information needs to be passed onto others in the interests of the child this must be done. It is a childcare practitioner’s duty to work for the best interests of the child, this may involve breaking confidentiality. One example of this happened in my workplace. I work closely with a girl aged 7, she is usually a very happy well behaved child. For a few weeks I noticed her behaviour declining.

She was getting told off in class and falling out with friends. I tried talking to her and asking her if she was ok and if there was anything worrying her. She talked to me about small problems she was having with friends and I offered her support in working out her squabbles. I was acting as her advocate being supportive to her. Eventually after other members of staff mentioned incidents I was advised by a collegue to speak to her mum. I told her of the problems she was having at school and asked if she knew of anything at home she may be worrying about.

Mum could not offer any reasons for her behaviour but told me problems had arisn at home that were unusual behaviour traits for her. One morning her mother dropped her off and she was very distressed and her mum asked me to take her from her and try to settle her into school. Her mother told me she didn’t know what the problem was. I took the child into a quiet room and I chatted to her about my morning until she stopped crying. She then told me her older brother went in her room every morning while she was getting changed.

She had asked him lots of times to leave she but he refused and he stayed in the room while getting dressed. She was obviously very distressed about it. I asked her if she had spoken to her mum about this and she said she did but she didn’t listen. I asked if she wanted me to have a word with mum about it and she said yes. Later in the day I decided to speak to our child protection co-ordinator and ask her advice. She told me to go ahead and speak to mum. The family are well known to us at school and in general the child is very happy with no particular behaviour problems.

I had a chat with mum and told her what her daughter had told me and suggested she had arrived at that age where she wants more privacy when getting changed. Mum said she had not been told and would have done something about it had she known it was upsetting her daughter. She also explained how busy the family are on a morning and maybe did not listen as she would normally. The family playstation is located in her daughter’s room and all the children in the family will go into that room to play on it. Mum told me she would have a word with the boys in the house.

This chat resolved the issue and the child came into school happily again. I acted as an advocate for the child, it was an upsetting issue for the child and she felt her mum didn’t listen to her. Other cases in school may be in abuse cases. Children may tell an adult about abuse and the member of staff must pass on this information to the child protection officer or social services. The teacher or teachers involved in the case would go to case conferences to discuss the child and comments made. They would also continue to support the child through the case.

The staff member would be acting as an advocate to the child. Staff in school may feel the need of an advocate, they may have issues regarding work that need discussing with the head teacher but may feel intimidated or unable to communicate well. They may use a colleague as an advocate to speak on their behalf. As a member of staff and a parent I have been asked to act as an advocate on behalf of parents. Some parents feel intimidated by their child’s class teacher and not want to raise concerns themselves but will ask other parents working in school to mention things for them.

I have been asked to speak to a teacher regarding homework which the parent thought was too hard for their child. The parent did not want to seem as if they were criticising the teacher by speaking directly, so asked me to mention this to the teacher as a comment I had heard. A teacher can act as an advocate by empowering children to speak up for themselves. Many PHSE lessons cover topics such as reporting bullying and understanding the rights of children in school. Children do not know their rights unless they are taught so by giving the child the knowledge of what to expect, it empowers the child to stand up for themselves.

An advocate is a role that should be taken seriously. It shows another individual trusts the advocate to speak on their behalf. Anyone can be an advocate and it is a very responsible role to take on. While working in the early years staff will be advocates almost on a daily basis. Children will need support from adults regularly and feel unable to express themselves without that support. Communication, interpersonal skills and an understanding of confidentiality are all important parts of being an advocate.

How To Use Advocacy?. (2020, Jun 01). Retrieved from https://studymoose.com/how-to-use-advocacy-essay 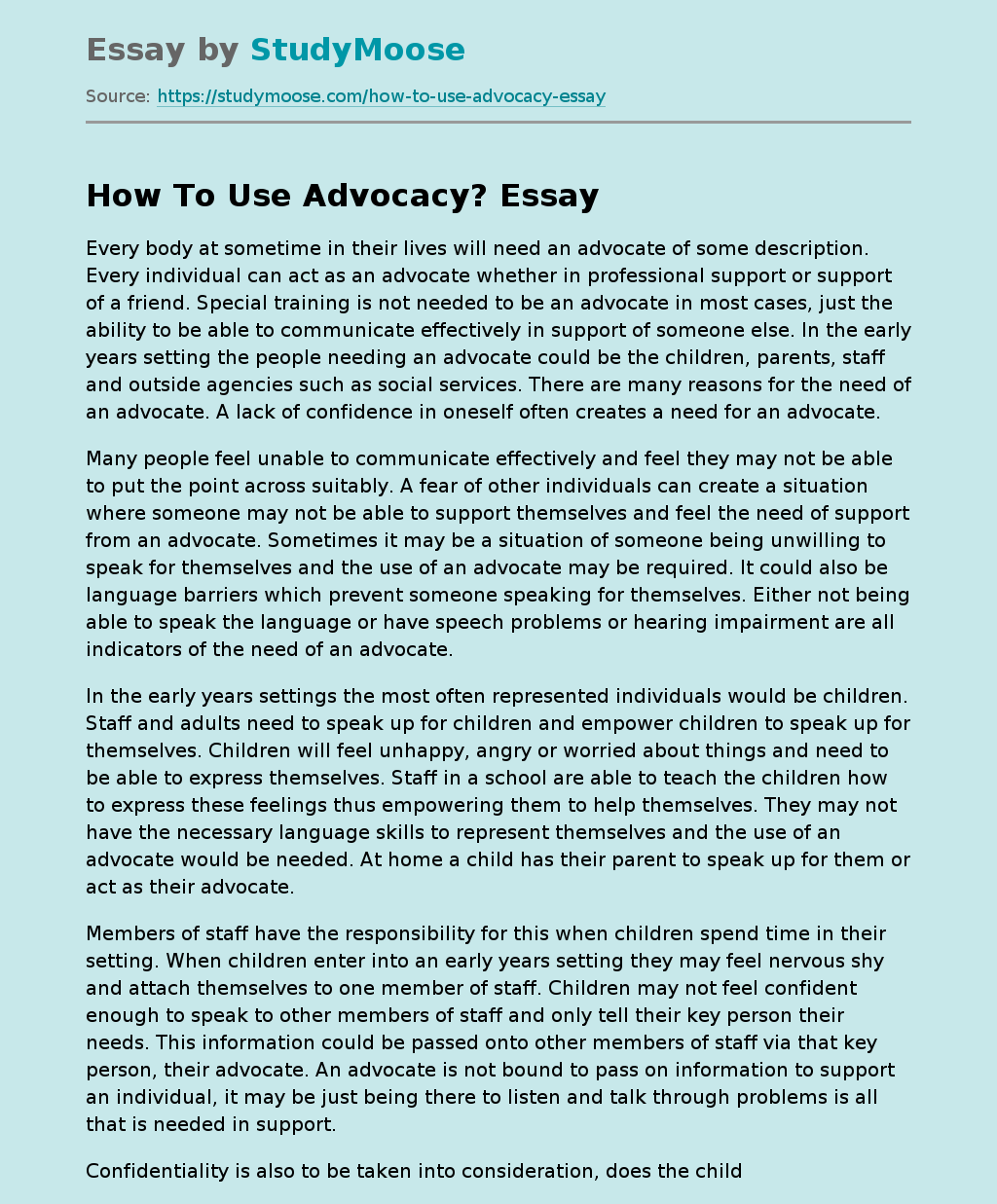