PETA is one of the world’s leading interest groups. It serves as advocates for the proper treatment of animals from the different industries: farming, clothing, entertainment, and laboratory experimentation. Like many interest groups, PETA is active in protesting for the proper treatment of these animals. They often resort to different methods in order to capture the public’s attention and sympathy for the animals. Some members commit vulgar acts like vandalizing clothing stores and harassing people who wear clothes made from animal skin.

Don't use plagiarized sources. Get your custom essay on
“ Interest Groups: PETA ”
Get custom paper
NEW! smart matching with writer

Such acts are in violation of the rights of these people, hence resulting in the arrests of these protestors. However, such cases do not really affect the overall success of PETA since they are still popularly known and well-supported. Interest Groups: PETA People for the Ethical Treatment of Animals or popularly known as PETA has over two million members that support the cause of halting the maltreatment of animals. Upon hearing the name of the organization, people can already grasp the idea of what the group aims for.

They get their funds from private sponsors—usually donations from its members.

Other than that, PETA has been popular to the public mainly because of the members’ active involvement in public protests—usually going nude. This fact makes them an interesting group to tackle for the paper. The Interests of PETA PETA’s primary interest is to uphold animal rights and protect it from being infringed in any sort of way. Their main focus is on the animals that are involved in four areas of human production and activity: farmlands (food), laboratories (usually medicinal), clothing (fashion), and entertainment (usually circuses and zoos).

Every issue that they tackle involves the infringement of the rights of animals—mainly the right to live and proper care. An example of an issue that I saw from a video streaming site is the brutal killing of baby seals for their furs, which only these baby seals have, in Canada. Unfortunately, the Canadian government allowed it because of the overpopulation of seals. It was a bloodbath that made PETA protest against the government that even allowed such thing to happen. Some people who are not members of PETA also feel sympathetic to these baby seals.

PETA supports legislations that stop maltreatment against animals—which includes killing animals for non-food products like clothing. One example of a legislation or act that they support is the Animal Welfare Act (AWA). This act promotes the proper treatment towards animals, mainly domesticated animals or the ones that are considered pets (e. g. , dogs). Since it is an act, any form of maltreatment to these animals is considered a felony. An example of the act’s violation that was retrieved from the PETA website happened in Clay County, Florida.

It was to test whether the dog that an officer left on a sweltering truck would die of heatstroke. The test involved placing another dog inside the same truck, which, in the process, violated a number of protocols from the act. The county’s animal control unit was cited by the U. S. Department of Agriculture (USDA), when PETA directly sent a complaint to them (Mackey, 2009). The areas of the government that PETA focuses on are groups from the Legislative branch since these groups usually handle the proposing and passing of bills, acts, or laws. Hence, legislations like the AWA are favorable for PETA and the animals.

PETA employs a number of methods to promote their cause and increase public awareness on animal cruelty. One of PETA’s methods of publicizing animal cruelty usually involve filming the act of cruelty itself—just like the baby seal massacre. Their website contains numerous videos of such acts, ranging from farm animals to household pets. These videos often serve the purpose of opening the viewer’s eyes to how some people can be cruel to animals. Another way of displaying their protest is by going nude in public; probably the most popular among the people.

They usually make their stand in front of clothing stores apparels made from animals. Going nude can be considered as a double purpose act since (1) not wearing anything suggests that the PETA member would rather go naked than wear something made from animals, and (2) it definitely grabs attention from the public, making it popular and effective. Another way of showing protests involves destruction and vandalism which are against the law, even if the cause for such act is righteous. A classic example would be pouring red paint or spraying it towards the person sporting a fur coat; red paint is used because it signifies murder.

News Appearances of PETA PETA is considered as a neutral interest group because it does not seem to have any political ideologies nor take a political party’s side, not unless it proposes the same aims as PETA’s. Moreover, PETA focuses more on the proper treatment of animals. If there are maltreatment issues, they publicize it. The following are two recent news articles that display PETA’s involvement with animal mistreatment. The first article is about a nude protest at K Street in Sacramento, California.

PETA volunteer Meggan Anderson, along with other PETA members, goes topless with her body covered in green paint to protest the skinning of exotic animals. This occurred around noon to 1 in the afternoon. A PETA representative explains this protest as a way to inform the shoppers to avoid buying apparels made from exotic animals like snakes and alligators since it involves cruel treatment just to get them (theKCRAchannel. com, 2009). The second article involves PETA representatives arriving at Fulton Elementary School located in Hempstead to protest against the Ringling Bros and Barnum & Bailey circuses that were in town.

They gave buttons and coloring books to the children to try to win their support against the circus, which was troublesome for the students since it took up their time in class. They also gave the school a few hours notice before they arrived, which made the school officials panic, issue a lockdown, and call the children’s parents. The kind of publicity that PETA displayed was not really necessary for children to get themselves involved at such a very young age. The parents should teach them about these things, not PETA (Newsday, Inc, 2009). Conclusion: PETA’s assessment PETA is active in protesting against the mistreatment of animals.

Its methods of publicizing the cruel acts end up with different results. Oftentimes, the videos win the sympathy of its viewers; hence, the group’s members and sponsors continue to grow. PETA’s weakness, however, may be the way they pick their audiences for their public protests. They should really consider the ages of their audiences. Another weakness would be the way they pick their targets for the protests—usually victimizing models or random people. Overall, PETA is still one of the most successful and popular advocacy groups in the world. References Mackey, J. (2009, March 19). Victory: USDA cites Clay County for illegal dog 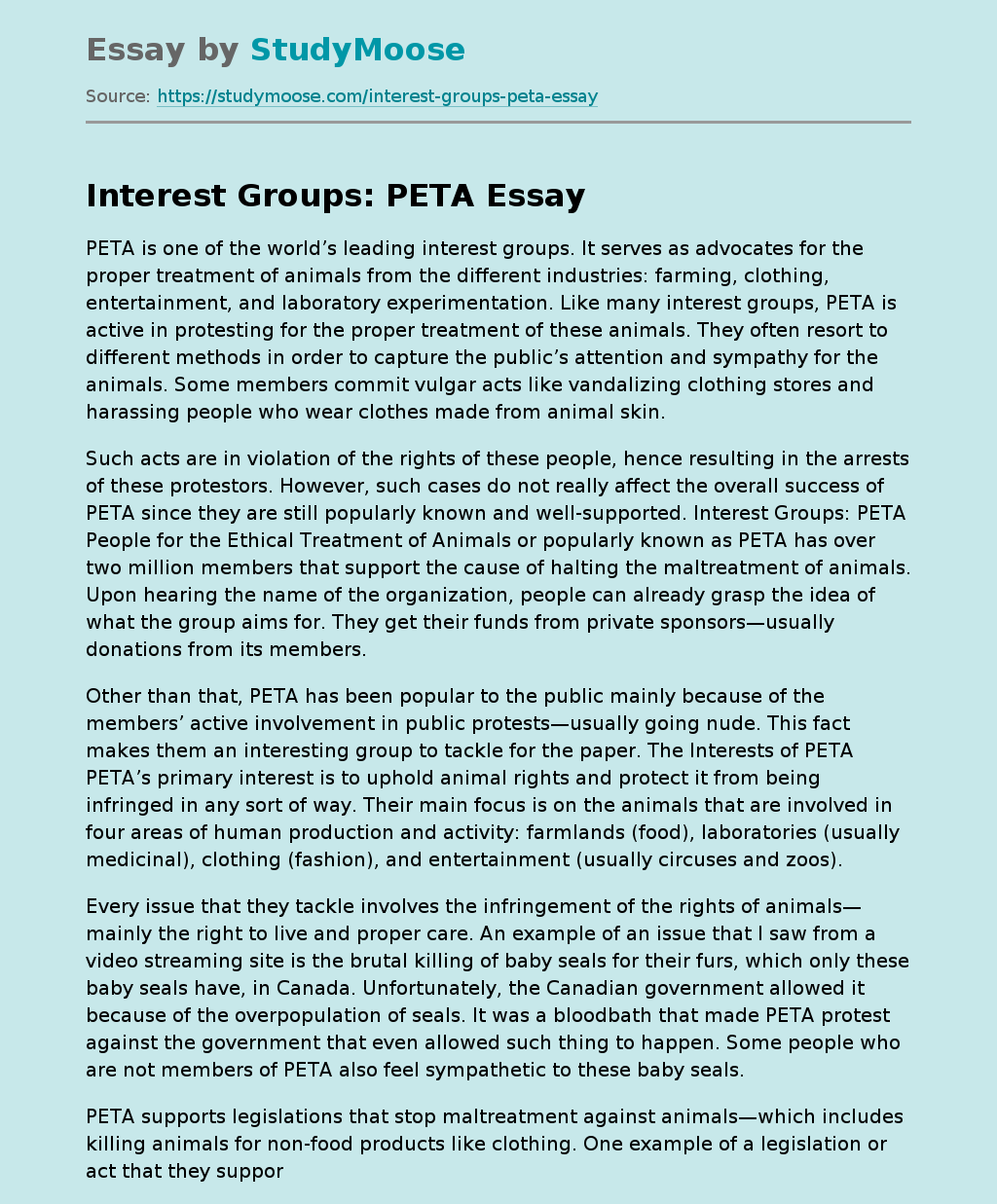