Education and advocacy of gender equality

‘The election of women into major political positions is happening at a snail’s pace”. (Kanjere & Rachidi, 2014). This has however, not waivered the likes of Nkosazana Dlamini Zuma who have broken all barriers in Africa to challenge the crown princes’ of South Africa, Cyril Ramaphosa for presidency. Could a new breed of women have arisen to challenge a world dominated by male figures? An assessment between these prominent figures will be considered so as to determine how their educational competency, political influence and leadership varied accordingly.

Don't use plagiarized sources. Get your custom essay on
“ Education and advocacy of gender equality ”
Get custom paper
NEW! smart matching with writer

Firstly, both leaders established ground roots of their political careers by gaining knowledge. While Ramaphosa pursued law through studying for a B Proc degree conversely, Dlamini- Zuma explored to gain more by doing medicine. She first obtained a Bachelor’s in Zoology and later attained an MB ChB at the University of Bristol. For a determined Cyril however, this was a time to accumulate the necessary skills and training that would later permit him to be renowned for “his tough negotiating skills” Mueni wa Muiu: 2018, 215-216, that contributed to ending apartheid in South Africa.

Whereas, Nkosazana’s cultivation in medicine; propelled her to excel in the health department by advocating for free medical care |and| to “further bolster the number of medical practitioners in the country, she instigated an exchange programme with Cuba” Du Plesis, 2017. Woman in the wings

Further into the apartheid era, South Africa had its fair share of; exploitation, economic imbalances and uneven distribution of resources between the white class and the oppressed black community.

Consequently, this must have compelled a homogenous influence by the two leaders. Ramaphosa therefore went on to becoming a man of repute by steamrolling the greatest strike in the mining sector that was to bring non-discrimination in the workplace. Whilst for Dlamini- Zuma, being a woman made her a patron of hope so as to close the gender gap of inequality by her ‘election victory as chairperson of the African Union Commission in 2012 against Mr Ping, (Jakkie Cilliers and Jide Martyns Okeke, 2012).This marked an era of women progression and development.

Finally when it comes to great leadership, creation of coalitions plays an intergral role in gaining support to rule. A close review of Dlamini- Zuma highlights great achievements and radical transformations on issues pertaining to health, sexual violence and improved governance aimed at closing gender gaps. Irrespective of this, she still faces the dilemma of being questioned as an effective leader. “Dlamini Zuma has not been able to enact many of the admittedly difficult institutional reforms she had promised” (Mtshiselwa, V.N.N. & Masenya (ngwan’a Mpahlele).M, 2016). On the other hand, Ramaphosa with an advantage of male political lineage was able to create a brand of recognition and as noted by (Report, 1986) ‘has emerged as one of the most powerful figures in South Africa’s non-racial trade union movement’. Additionally, he is distinguished for being a key figure in the formation of Congress in South Africa which adds to his recognition and status.

In conclusion, both men and women share a relatively fair desire and ability to lead with regards to their competency in areas of education, influence and leadership. Even though education and advocacy of gender equality has created an opportunity for women to take challenging roles. More work on the ground roots is essential in order for women to gain equal recognition in a society that has long been dominated by male authority.

Education and advocacy of gender equality. (2019, Dec 18). Retrieved from https://studymoose.com/education-and-advocacy-of-gender-equality-essay 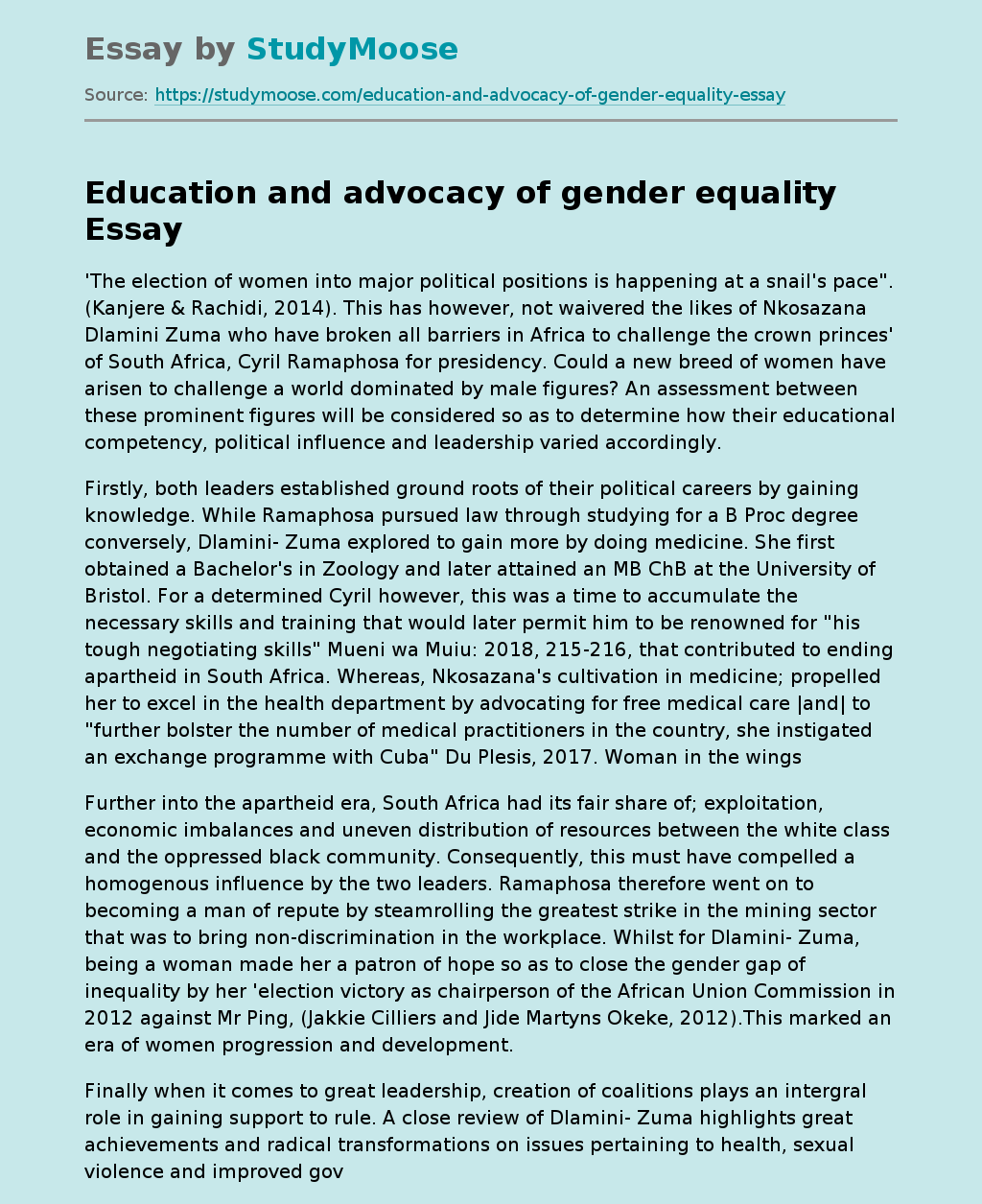