Don't use plagiarized sources. Get your custom essay on
“ Community Health Advocacy ”
Get custom paper
NEW! smart matching with writer

The Christoffel’s three stages of a conceptual framework for advocacy will be described. Then each stage as an aggregate selected is described.

Community and Aggregate Terms Defines
In community health care nursing, aggregate is defined as the whole population, which is being used to describe a given environment. The term aggregate is used to refer or define a group of people in a society who are believed to have similar or common problems and challenges in their life.

These people should share similar characteristics and also they should be living in the same area. The group which is to be described should be suffering from the same medical or health care problem and should be in search of similar medication or health care services. Aggregate in nursing setting literally is defined as the entire, whole, or the sum of a given group with similar problems, (Nies & McEwen, 2010).

Differences Between Aggregate and Community
There are those people who use the term community when referring to aggregate.

Aggregate and community are two different concepts but are closely connected. Community in nursing health care setting is used to refer to the general population in a given area. A community is the entire population that includes the sick and healthy population. When discussing about the aggregate, we refer to the population, which is experiencing a health condition along with those who are responsible of taking care of the group that are sick. The entire population that comprise of healthy and sick in the society is referred to as the community, (Stanhope & Lancaster, 2009).

Identified Aggregate and Description as a health Issue
There are those people who use the term community and the term aggregate to refer to the same thing or to mean something the same. There stand significant differences between the term community and the term aggregate. When we talk of aggregate, we are referring to a population, which has similar medical problems or challenges and live in the same region or geographical area. For the community, it’s the general population that involves the sick and those who are not sick. In this case, Adults suffering from heart disease in Illinois is an aggregate population that is used to define the current health care challenges. In the state of Illinois, specifically the Sangamon county community, evidence shows that heart disease is the number one reason for death of adults in the entire state of Illinois and in Sangamon county (Illinois Department of Public Health [IDPH], 2010).

Christoffel’s Three Stages of a Conceptual Framework for Advocacy Christoffel’s three stages for advocacy include information, strategy, and action. The stages take place concurrently. The first stage, information, includes naming, describing, and measuring the public health problem. The second stage, strategy, involves using the information in the first stage to develop a plan of action for the promotion of public health. The stage includes. This stage involves the communication of information to the public and health care professionals. Groups can then be assembled to focus on the issue and plan needed changes. Strategies can include public education messages, campaigns, and press conferences. This action may involve fund raising, persuading individuals to change their lives, and legislation involvement.

To achieve action, changes in mindsets, behaviors, and resource provision. Public health advocacy transpires at two levels: the individual/family level and in the larger community level (Christoffel, 2000). Advocacy that focuses on the interpersonal or intrapersonal level is frequently referred to as patient advocacy. Patient advocacy involves any “activity that benefits a patient” (Torrey, 2010). It can apply individual patient care, groups that develop policies, and legislation changes to improve the health care system for patients. There are many examples of patient advocacy organizations, which include government groups such as the Center for Disease Control, American Heart Association, and individual patient advocates who act as healthcare assistants (Torrey, 2010).

Applying Each Stage as an advocate for the Aggregate
The first stage in the Christoffel’s advocacy framework talks about the information factor. The information names, describes, and measures the public health problem. When discussing the issue of heart disease. This stage can be used to describe the disease process, the risk factors involved, and it’s complications. During this stage, the private sector or the government sector get involved so as to develop the research needed that can be used to measure the public health problem. Evidence shows that this stage is relevant simply because it assists develop all statistical information and results that are suitable in order to address the advocacy challenge. The first stage in Christoffel’s advocacy framework is to develop a research on heart disease within the society. This stage will help develop relevant information on the mortality rate related to heart disease and/or its complications (Christoffel, 2000).

The second stage in Christoffel’s advocacy framework is the stage of strategy. Having collected relevant information about the problem of health care issue, the second stage helps work on the information so as to understand the problem completely. In this stage, the central idea is to get results that will help come up with some strategies on how to approach the health problem. Experts in respective fields translate the research findings so that proper results are developed to develop a plan of action (Christoffel, 2011).

The third stage in Christoffel’s advocacy framework is the stage of action. Strategies, which are developed in the second stage on how to handle the health issue are implemented and monitored in the final stage of Christoffel’s advocacy framework (Christoffel, 2011). It is alleged that when strategies in stage two are implemented and monitored they provide the best results in respect to the health care environment, (Stanhope & Lancaster, 2009). Public health messages on the news and posters can help educate the community about heart disease. There are also local physicians who provide free learning seminars on specific diseases. Raising funds to help with campaign measures can also be implemented during this stage. Legislation can be educated on the health issue to convince policy makers to get involved. The main part of this stage is action. The goal is to influence people to change specific habits that will reduce the risk of developing heart disease.

Conclusion
The aspects of community and aggregate are closely connected, and in most cases a lot of people tend to use them interchangeably. These two terms are used interchangeably, but they have different meanings. There are those people who use the term community and the term aggregate to refer to the same thing or to mean something the same. There stand significant differences between the term community and the term aggregate. Aggregate is the populations that has similar health problems and are seeking similar health care services, but the community is the entire population that carries the sick and the healthy. The use of Christoffel’s advocacy framework helps solve a problem in accordance. 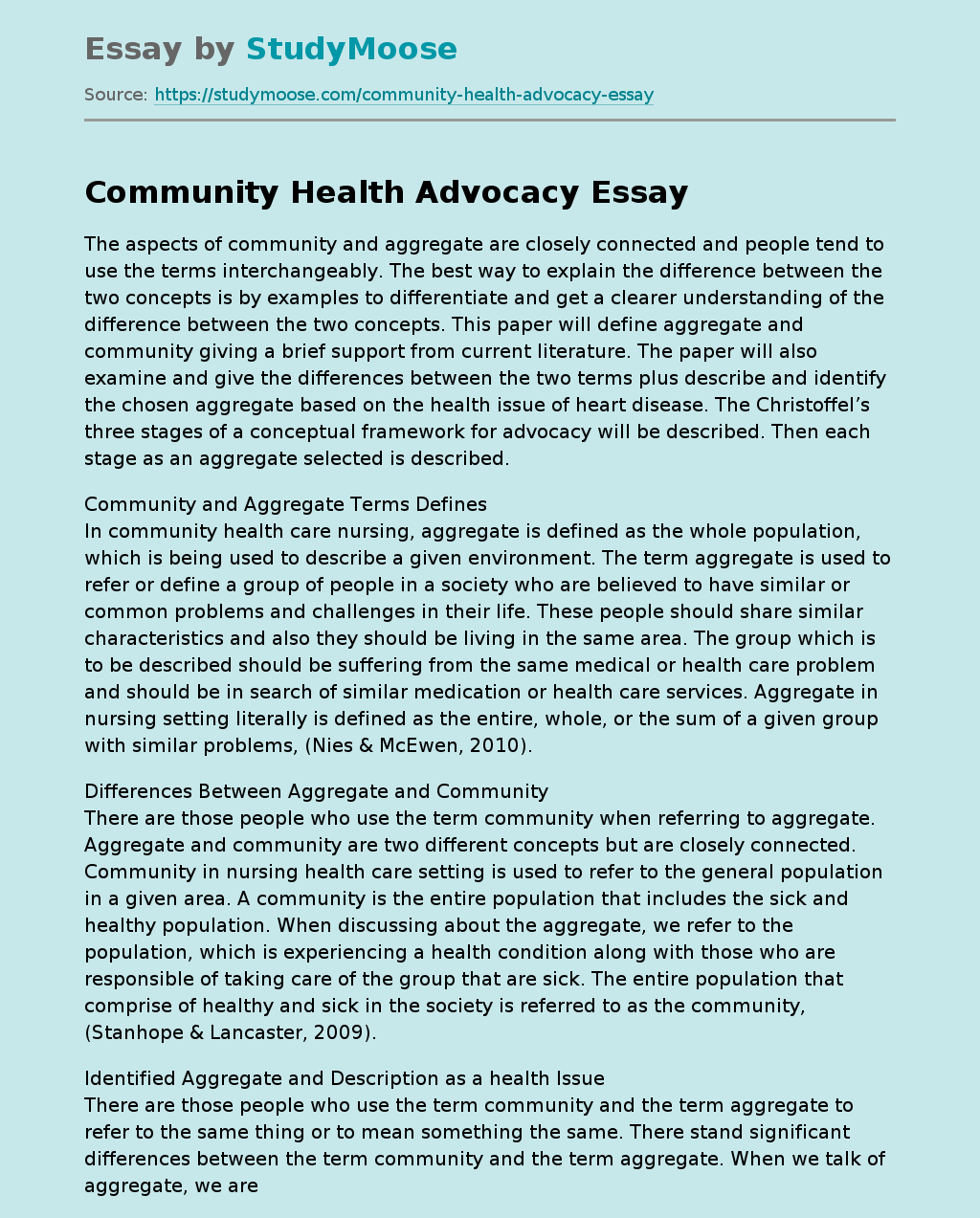