An Argument Against Gun Control

Gun control has become more and more of a hot-button topic in the United States, especially after events like the Sandy Hook shooting in 2012, when many people questioned the necessity of the second amendment in this day and age. Indeed, upholding the second amendment continues to be a difficult prospect when it does not seem like these guns are being used for good. However, the vast majority of people not only use them responsibly, but also protect themselves and their families, using these guns.

Don't use plagiarized sources. Get your custom essay on
“ An Argument Against Gun Control ”
Get custom paper
NEW! smart matching with writer

For this reason, guns should not be limited by the government. Essentially, the issue of gun control boils down to two primary issues that have been in conflict with each other since the founding of America: freedom vs. security. In particular, you can read about it at Argumentative Essay Examples. Anti-gun control advocates insist that their guns are necessary for their own security, but also satisfy the freedom requirement by allowing them to freely practice their second amendment rights.

Anti-gun advocates see things differently, however, since, to them, having most people in America brandishing a firearm represents a profound security threat to them. However, this security risk that is touted by pro-gun control activists is negated by the need for guns in order to ensure security, and that the odd shooter is a problem with society at large, not the guns themselves.

If gun control were in full effect, and it were made illegal to own a firearm, criminals would simply acquire guns illegally, and would virtually have free reign of whoever they wanted to kill, since law-abiding citizens would not have the means to stop them.

Evidence of the effectiveness of firearms as a self-defense tool can be seen in numerous studies. For example, according to a study in 2000, an estimated 989,883 U.S. citizens used some form of gun to defend themselves (Agresti and Smith, 2). In addition, in 1993, 3.5% of households had used a firearm to defend themselves “for self-protection or for the protection of property at home, work, or elsewhere” (Agresti and Smith, 3). These numbers put gun control in a much more positive light, especially from the perspective that they should be used to increase security in an increasingly insecure country. The best way to prevent shooting incidents like the Sandy Hook shooting is not to simply remove all guns, as that will not fix the underlying problem, but to focus on rehabilitating people who either have had violent tendencies in the past, or exhibit symptoms that are consistent with mass shooters.

Those who support gun control see each person in possession of a firearm, especially those with a concealed weapons license, as another potential Sandy Hook or Virginia State shooting just waiting to happen. That is a valid claim, since the potential is certainly there. The argument that “people don’t kill people, guns kill people” is another popular quote heard in the pro-gun control community, and while it has some merit, it requires some closer examination in order to determine the validity of the statement. While it is certainly true that a gun has the potential to kill someone, it is only a tool. The bigger issue when it comes to violent crimes, especially gun-crimes, is the individual behind the gun. To this end, one of the most effective solutions to the problem of gun violence in this country is to fix the underlying problem, not to simply take away the guns, because that would only invite more violence, especially from the more hardcore gun activists. And, of course, many deaths and injuries from violent crime come from firearms. For example, in 1996, 65 percent of all murders between spouses were performed with a firearm (Rand, 3).

Essentially, this means that guns beget more guns, which, in turn, beget more violence, or at least that is what this study shows. However, the issue is a little more complicated than that. For instance, many areas of the nation are simply violent by virtue of their inhabitants, and, even if guns were outlawed, they would still fight amongst themselves using whatever weapons are available. In addition, it is possible that many who live in these areas with large amounts of violence actually purchased guns themselves for the sole purpose of self defense, so that if they themselves were attacked by an assailant using a gun, they would not be completely helpless. Although firearms work well as a way to protect oneself, they also act as a threat of immediate vengeance by the victim, assuming the victim is in possession of a firearm. “A study showed that, in a survey of male felons in 11 state prisons, 34% had been “scared off, shot at, wounded, or captured by an armed victim,” while 40% said they decided not to commit a crime because they knew or believed that the victim was carrying a gun, and 69% said they knew of another criminal who had not committed a crime because the victim had a firearm” (Agresti and Smith, 6).

This helps to show what gun-advocates call the brighter side of the gun-control debate: that guns can, and oftentimes are, used as a self defense or deterrence measure, rather than a pure instrument of violence. This theory seems to hold some water, since a study shows that, in 1988, only about 30% of citizens owned guns. Yet, in 1996, that number had increased to 50% (Lott, 38). In 2004, that number remained steady. The interesting thing about these figures is that violent crime in America has actually been decreasing at a slow rate. While it would be foolish to blame this entirely on guns, it is a good indicator that guns at least function, on some level, as a deterrent and personal defense tool. The only problem, of course, stems from the fact that criminals have guns as well, but allowing virtually anyone to own a gun levels the playing field to an extent. If guns were totally outlawed, encounters would be much more one-sided, as criminals could attack citizens with little to no fear of immediate reprisal on the part of the victim. Gun control is a fairly black-and-white issue, yet seems to only have extremists on one side or the other. While it would be easy to simply dismiss all pro-gun control arguments, they do have some merit.

For this reason, there must be consolations made in order to make guns a little bit safer for everybody. The best way to deal with this issue is continue allowing citizens to use firearms, but perhaps limit access to guns in order to ensure safety for the greatest number of people. Allowing firearms if the gun user registers and carries a permit for the firearm would help to reduce the number of homicides with firearms, if not as many people have them. Each action has its own drawbacks, however, and it is important to understand that, especially for this issue, which has undergone something of a deadlock in the recent past. Freedom and security should be balanced in equal measure, and it is important to come up with solutions to this issue with that in mind.

An Argument Against Gun Control. (2016, May 23). Retrieved from http://studymoose.com/an-argument-against-gun-control-essay 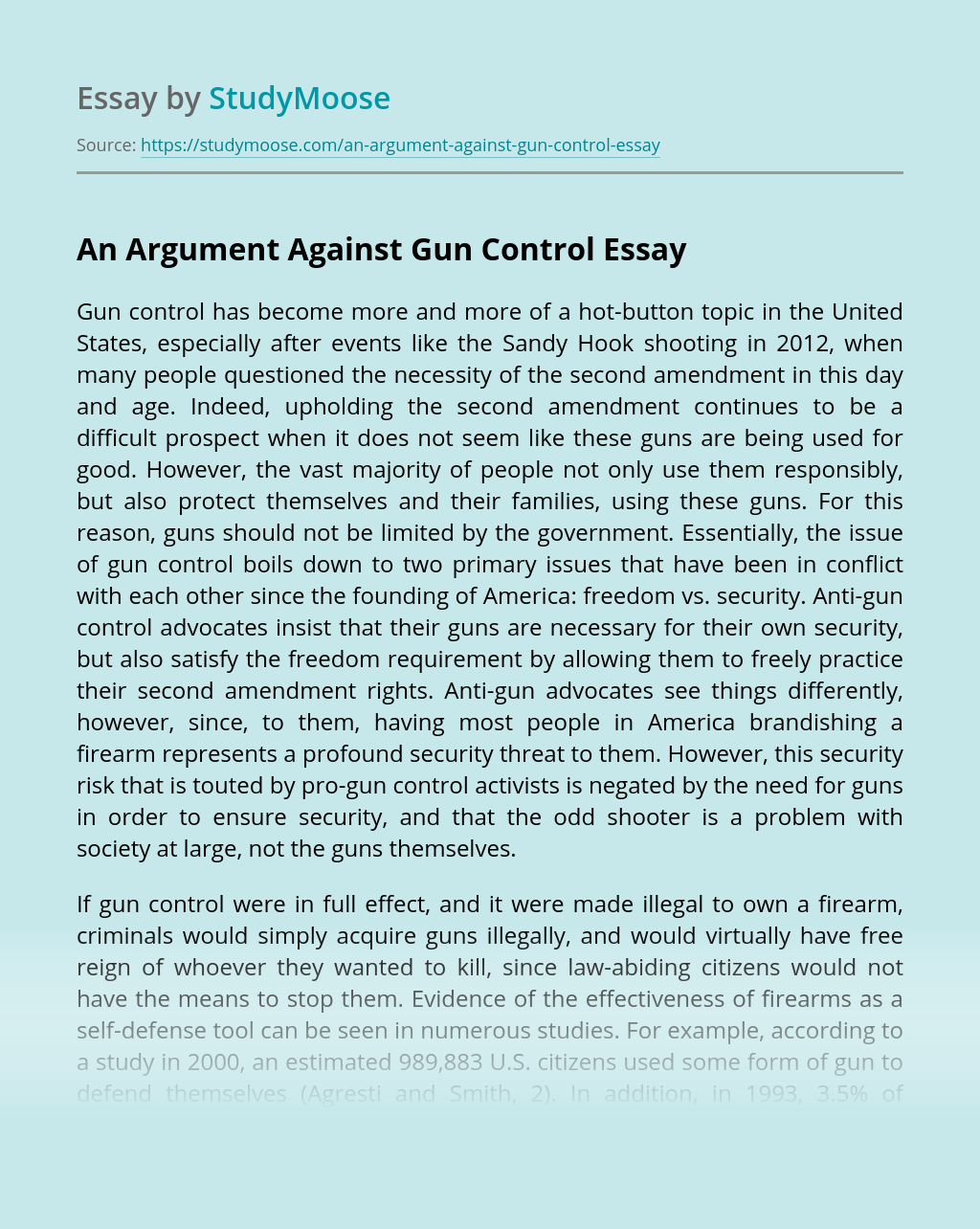