The argument on firearm regulation has been a heated discussion for many years. On one side of the debate, we have people in favor placing restrictions on guns, while, on the opposite end of the spectrum, we have people fighting the regulation of guns. People in favor gun restrictions believe gun control can reduce crime ,while, the people against gun control believe having the right to bear arms is an effective crime deterrent. I believe that every law abiding citizen should be able to carry a gun and defend themselves against people who intend to harm them.

Don't use plagiarized sources. Get your custom essay on
“ Argument Against Gun Control ”
Get custom paper
NEW! smart matching with writer

Gun control laws do not deter criminals from possessing firearms. Whether or not there’s a law restricting gun use, criminal will always find a way to get a gun because criminals are less likely to obey laws.

That’s why they are called “criminals”. Also there’s no law that can stop the supply and demand of the illegal arms trade. If there’s money to be made in the black market, someone will profit from it. Criminals can easily obtain a gun through the black market. An unnamed felon was quoted, “There’s guns everywhere. If you got the money you, can get a gun.

” If a criminal wanted to get a gun,they are not likely to walk into a store to buy one. Therefore, they could care less whether they had a background check or not. No law can stop criminals from arming themselves to protect themselves. Most criminals have lots of enemies and they rather get caught with a gun than get caught without one. (Stossel).

If you want to know more about gun control read argumentative essays.

The more gun control rules and regulations there are, the happier the criminals will be, for they know the more gun laws there are the less chance they have of having a crime victim defend themselves with a lawfully-owned firearm. In many right to carry states, crime statistics are lower than the states with gun laws. The reason why is because guns are used more defensively than criminally. Criminals are usually rolling the dice when they are targeting law abiding citizens in right to carry states. (Polsby) Criminals do not fear the police or other authorities. What they fear most is the citizens who might be potentially armed. It makes it harder for criminals because they do not know what to expect from them if they’re planning to rob them. They’re either fortunate to have an unarmed victim or they become a victim with a citizen that is ready to shoot and defend their families. (Stossel).

Gun control laws only affect the citizens who follow the law. The law does not apply to the criminals. Regardless if theres a gun ban or not, criminals will find a way to obtain guns. The gun laws have no way in curtailing the illegal arms trade. In Chicago, handguns are not for sale legally. Only shotguns, rifles and ammunition can be bought with people with a Firearm Owners Identification Card. The Chicago area is one of the most difficult places to legally obtain a gun.

In order to get a gun license, people have to go through a background check and wait up to a month to legally carry a weapon.(Polsby). While it is difficult to legally possess a gun, it is way more easier to illegally carry a gun in Chicago. There are thousands of unregistered firearms in the streets with thousands more coming in every month. Banning the sale handguns in Chicago makes no difference as well too. People can go elsewhere to buy a gun. They can go out of town or even out of state to buy a gun with Indiana and Wisconsin in close proximity.(Moorhouse and Warner).

Another example why gun control law are ineffective is the staggering increase in crime in England since they imposed a ban on guns. In 1997, England passed a ban on all guns, which makes it illegal for all citizens to carry guns. England’s gun sanctions made it one of the most strictest law in the world. The new law only created an illusion of the country being more safer. Instead of reducing crime, the law put it’s citizens at the mercy of criminals who are well assured that their would be victims are unarmed and defenseless. In the two years after the law was enacted, gun related crimes increased to 40% and armed robberies rose to 53%. From 1997 to 2001, violent crimes more than doubled. People are six times more likely to be robbed at gunpoint in London compared to New York. In the United States, the occurrence of home burglaries is 13% because the majority of burglars fear armed homeowners more than they fear the law. England’s burglary statistics are 5 times higher compared to the United States at 55%. England’s gun ban created the unintended consequences of lawlessness in the streets, as well as, it did not stop criminals from possessing guns and committing crimes. (Malcolm)

Even in the United states where states and cities that passed strict gun laws have found them to be ineffective. The places where gun control laws are the most strictest are places that have the most crimes are committed with firearms.(Piquero). Of the 15 states that have the highest homicide rates, 10 have very restrictive gun laws. New York, for example, has one of the most restrictive gun laws in the nation has 20 percent of the nations total of armed robberies. Another example, Washington D.C., since guns were banned in 1976 the murder rate has risen 200 percent. In Chicago, the city consistently had one of the highest homicide rates in the nation since they enacted a ban on gun in 1982. In May 2010, a month before the Supreme Court overturned the ban, Chicago already had 113 homicides for the year.(Piquero).

Since gun restriction laws were repealed by the Supreme court in 2010, Chicago and Washington D.C. received significantly lower crime rates. The murder rate in Chicago in the first six months of 2011 is 14% lower than the first six months of 2010. This is the first significant drop in the murder rate since gun sanctions were first passed in 1982. In 2008, the Supreme Court lifted the gun ban in D.C. in the case of the District of Columbia vs. Heller. Since the gun ban was repealed, the murder rate in D.C. has dropped 35% from 2008-2010. The rate of assault with weapons decreased by 37% and armed robberies fell as well too by 25% (Lott). These statistics further prove how ineffective gun control laws are. Not only they do not work in reducing crime they create adverse effects on crime. Instead, they make the problems worst.

I believe that the right to bear arms is an unalienable right and I don’t believe that government have that right to take it away. I feel that all citizens have the right to protect themselves and their families. Gun laws restricting the use of guns does not help law abiding citizens. These laws only take away the ability of each citizens to defend themselves and makes us helpless against criminals. Gun control only creates an illusion that a society is safer and it does not solve the root cause crime. One cannot solve the crime problem by just simply taking away guns.

The crime problem goes way deeper than just guns. Criminals will find a way to get guns regardless if theres a strict law or not . Most criminals are opportunist and having a strict gun law only gives them the opportunity to commit more crime with less worry about that person being armed. I believe that there is other ways to fight crime, however, I don’t believe gun control is the answer to making our world a safer place. 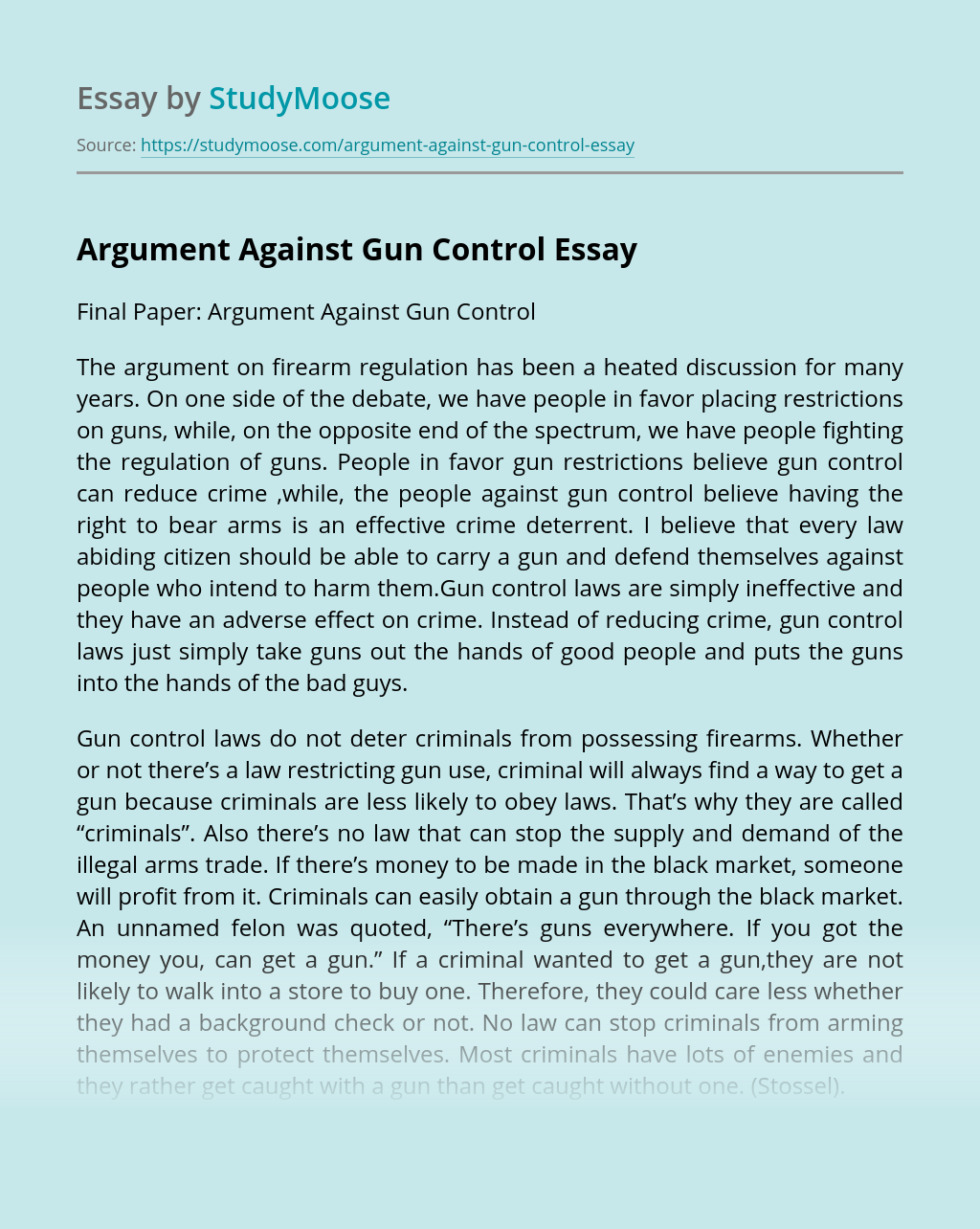