Pros and/or Cons of Stand Your Ground Law

The infamous George Zimmerman case has stirred the controversy around Stand Your Ground laws and brought these laws to the public light, becoming the subject of vigorous nationwide debates whether these laws should be repealed or not. Like many controversial legislative, Stand Your Ground laws have their critics and proponents, and both sides tend to make valid points in defense of their position. The goal of this paper is to show cons and pros of Stand Your Ground laws. In Florida as well as 21 other American states, as stated by to the National Conference of State Legislatures, the above-mentioned laws are self-defense laws that relieve individuals of their “duty to retreat from an attacker before using force against them anywhere they are legally allowed to be” (Clark).

Turn in your highest-quality paper
Get a qualified writer to help you with
“ Pros and/or Cons of Stand Your Ground Law ”
Get high-quality paper
NEW! AI matching with writer

While in general these laws do not use such a notion as “stand your ground” specifically, Florida together with nine other states has these words in its law. In Stand Your Ground law in Florida, particularly, it is stated that “a person who is not engaged in an unlawful activity and who is attacked in any other place where he or she has a right to be has no duty to retreat and has the right to stand his or her ground and meet force with force, including deadly force, if he or she reasonably believes it is necessary to do so to prevent death or great bodily harm to himself or herself or another or to prevent the commission of a forcible felony” (qtd.

The major con of this law, as its critics think, is that it essentially gives individuals with malicious intent a legal loophole to avoid criminal prosecution for killing someone if these individual state that they had to defend themselves. Eric Holder, the US Attorney General, is among those opponents of Stand Your Ground laws who believe that these laws will allow individuals to provoke others to attack them first and then, as it can be deemed self-defense and these individuals will not have the duty to retreat, they will be able to kill them without fear of getting prosecuted (Cooke). In states with Stand Your Ground laws, people will not have to think twice whether they should use weapons to defend themselves against the attackers or retreat because they will have the right to kill their attackers. Such violence will breed further violence.

Criminals may use this law to cover up the deliberate and premeditated killing of people. However, proponents of this law may respond to the above-mentioned claims of their counterparts as follows. This critique of Stand Your Ground crumbles under the weight of the argument that “In almost every state, if and when an individual enters into an altercation with the deliberate intention of provoking the other party into threatening him with death or injury, they lose the right to claim that they were acting in self-defense” (Cooke).

All individuals have the right to liberty and life and therefore, they have the right to defend themselves. Those who attack people violate their victims’ rights to live, so Stand Your Ground laws legally recognize these rights, attempting to “tilt the balance in favor of the attacked” (Cooke). Both, the opponents and proponents of Stand Your Ground laws have reasonable and sound arguments, but they need to find some middle ground regarding these laws that will satisfy both sides.

Pros and/or Cons of Stand Your Ground Law. (2016, Jun 13). Retrieved from https://studymoose.com/pros-andor-cons-of-stand-your-ground-law-essay 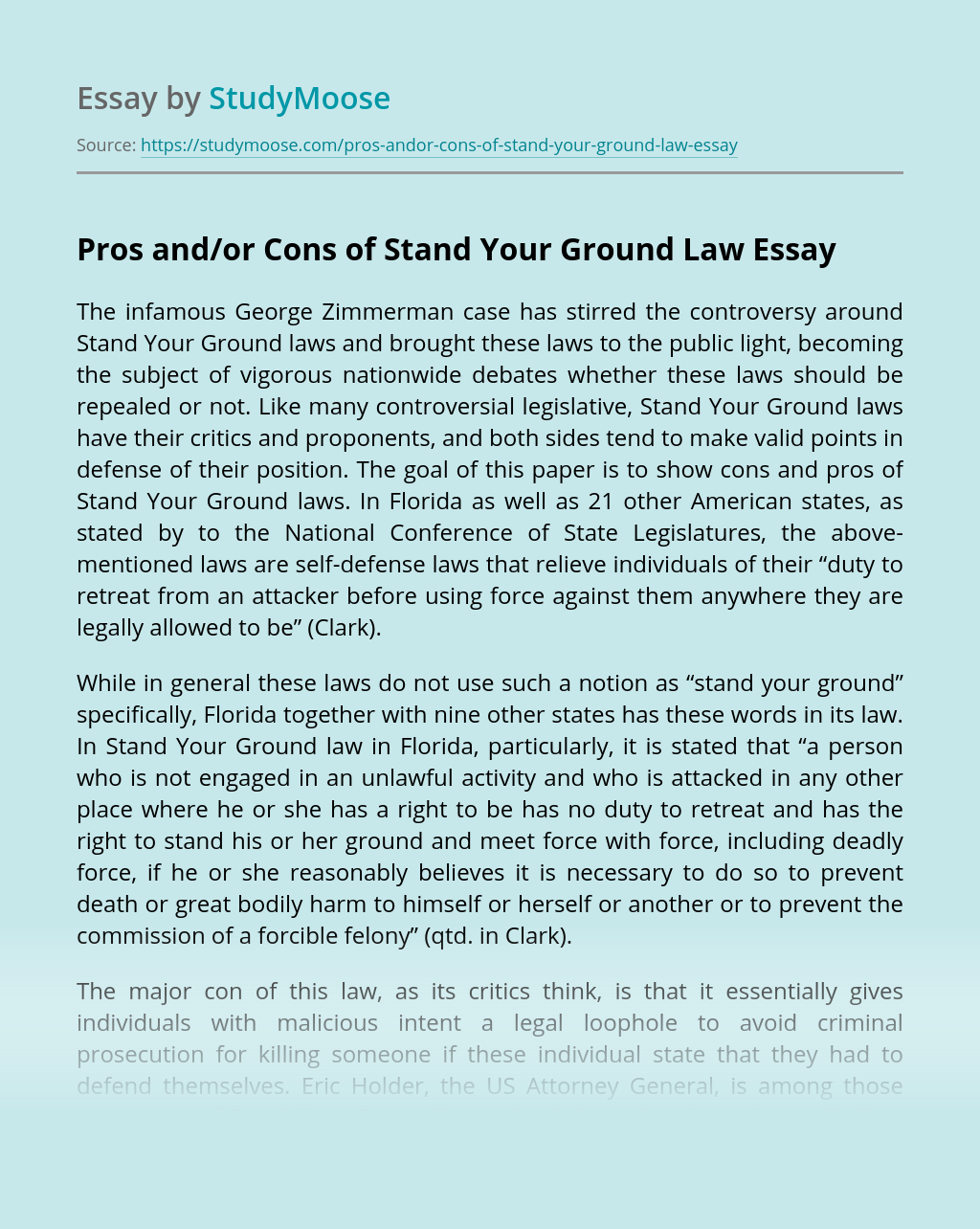 Turn in your highest-quality paper
Get a qualified writer to help you with
“ Pros and/or Cons of Stand Your Ground Law ”
Get high-quality paper
Helping students since 2015
Stay Safe, Stay Original