It goes without being said that guns are indisputably a hot topic in just about anyone’s dinner table. In relation to ethics, different ethic ideologies will have different outlooks on the topic of gun control. Is it our right? Or an outdated idea that promotes violence? My argument today is as follows: a utilitarian society would not and could not accept guns into their communities because of its inevitable harm to the mass majority making it a contradiction of utilitarian belief.

Don't use plagiarized sources. Get your custom essay on
“ Utilitarian Gun Laws ”
Get custom paper
NEW! smart matching with writer

In this paper, I will discuss the purpose of guns and how they contradict utilitarian belief, why guns should not only be stripped from citizens but also law enforcement, and why guns benefits cannot outweigh their faults.

To very briefly summarize the belief, utilitarianism is an ideology that states that the morally correct course of action in any case is the one that results in the greatest balance of benefits over harms for everyone involved.

“…laws and social arrangements should place the happiness or (as, speaking practically, it may be called) the interest of every individual as nearly as possible in harmony with the interest of the whole.

Among the things that can be evaluated are actions, laws, policies, character traits, and moral codes. Utilitarianism is a form of consequentialism because it rests on the idea that it is the consequences or results of actions, laws, policies and more, that determine if they are good or bad and right or wrong. Overall, regardless of the situation and decisions at hand, we must choose the one that will produce the best overall end results. (Mill & George pg. 324)

In the ideal of utilitarianism, we should choose the option of action or policy that produces the largest amount of good which would lead us to the conclusion that a banning of or strict gun restricting policy be the best scenario for a utilitarian society. We have tried to live in a country where one has their right to bear arms and we simply trust they are well intentioned. But, as of lately, trust is no longer something we can freely give to strangers. By leaving guns in the hands of the untrained, we put many lives at stake. By putting lives on the line, we are no longer making choices that result in maximum “good” therefore we are not following utilitarian belief.

Many may argue that, like our right, guns were made to protect us. However, it is widely known that guns were made to produce harm. Whether the gun is aimed at a bad person or an innocent one, when the trigger is pulled, bad is released. There are guns, like AR15’s, that were made completely under the intention to destroy anything on its other end. So, though many may debate whether guns are for defense or offense, it is clear what their main purpose is.

Further, as mentioned in our last class, yes, other weapons can hurt and kill people so why not ban them as well? It’s true terrorism these days can involve a van in a group of people, or an attack can involve a knife or a fist, but it is important to note that these everyday objects were not made with the intent to harm life in mass ways, further, these objects intent is not cause harm to life specifically.

Of course, the big question will arise, “is anyone allowed to have guns in this society?” Well, to be rash, no one should have guns in a utilitarian society. Many may ask, how will laws be enforced, or authority be feared without guns in a police man’s holster? In today’s world we have been seeing more and more ongoing violence of cops against civilians and vice versa. Many deaths are caused by policemen feeling threatened which leads them to draw their weapons on civilians. Later, many are devastated to learn they have mistakenly taken the life of an unarmed individual or in hindsight, could have reacted in a much less violent matter.

Further, there are worse cases of armed policemen acting on impulse and killing people for their own personal agenda. Regardless, violence on either side should end. If guns as a whole were banned from our lives, cops would be less on edge as well as civilians. Cops, in turn, would never need to draw a fatal weapon during traffic stops because they can trust the person in the car will not hurt them gravely and the civilian in the car will not need to fear for their life over a sudden movement they might mistakenly make. Cops would be no longer feared but seen as a symbol of safety as they were intended to be. Without guns, less accidental deaths would occur between police and civilians, less riots over police brutality and less riots over the debate of that very issue. Police can resort to weapons that are almost 100% less deadly like tasers, maze spray and much more.

These weapons alone can hurt and distract a person enough for a cop to successfully cuff and secure them without risking their life or yours. By wanting to prevent riots and violence, it is only fair that cops are not given the complete power to be the only people to hold such weapons, if no one else has them, they do not need that level defense anymore. This would be another way the mass majority would be safe while still maintaining a justice system.

It must be mentioned that guns do not hold zero benefits, they simply do not hold enough. Under the basis of the benefits cannot out weigh the faults, utilitarian ideology would reject guns as the result does not produce the most amount of good. Though guns have been used to defend and protect, the same guns obtained legally are the same guns that can assist in the deadliest crimes. Because most mass shootings are done by those who have legally purchased guns, how can those distributing gun licenses know for sure they are not enabling the next mass shooter/ It may sound close minded, but it is simply a risk not worth taking in benefit of the mass majority of our society.

If our country chose to live by a utilitarian ideology and ban guns or severely control gun owner ship, the country would see dramatic results. For example, Japan is the closest to a utilitarian society in regard to gun laws because the country has adapted a seemingly zero-tolerance gun ownership policy. This policy has directly contributed to Japan’s shockingly low rates of gun crime. As of 2011, gun ownership was at the surprisingly low number of 271,000, in a country of a population of over 127 million people. In 2014 alone, only four gun-related deaths were reported while only two were reported in 2006! In the year of 2014, the death toll from guns raised to 22 which caused a mass government discussion of their gun policies to lower their gun related crimes once again. Like utilitarian view, even though the amount of gun deaths were miniscule, the small rise of deaths still called for immediate attention as the entire community was not benefiting anymore. Further, in Australia, their strict gun policy includes that each state and territory must enforce a gun licensing and registration system that requires potential owners to have “genuine reason” for having a gun/firearm. These reasons include: sports such as target shooting, hunting or if they are a farmer. This policy also started a “national gun buyback policy” for all firearms that did not comply with the policy. (Juliette, et al., 2016)

Because of this policy, there have been no mass shootings in the 20 years. In comparison to the US, which has had almost as many days as mass shootings this year, a utilitarian society would have made an immense change.

Not only would the banning of guns be a utilitarian choice, it would be successful in providing the most amount of happiness and good as per other major countries with large populations like our own. This affirms that a society could not be a utilitarian one if guns were still allowed. Guns cannot arguably benefit our society more than its eradication could. Guns, along with other weapons of mass destruction, do not benefit or result in the maximum good/ happiness, thus it cannot continue in a utilitarian society. Many may argue the opposite and believe that if everyone was armed, people would not dare to commit violent crimes. However, this is a very naïve view considering there are many crimes committed in states where most of the civilians are armed at all times. This still leaves our safety up for chance, something a utilitarian community cannot risk. Guns cause mass harm thus cannot coexist with humans in a utilitarian society. 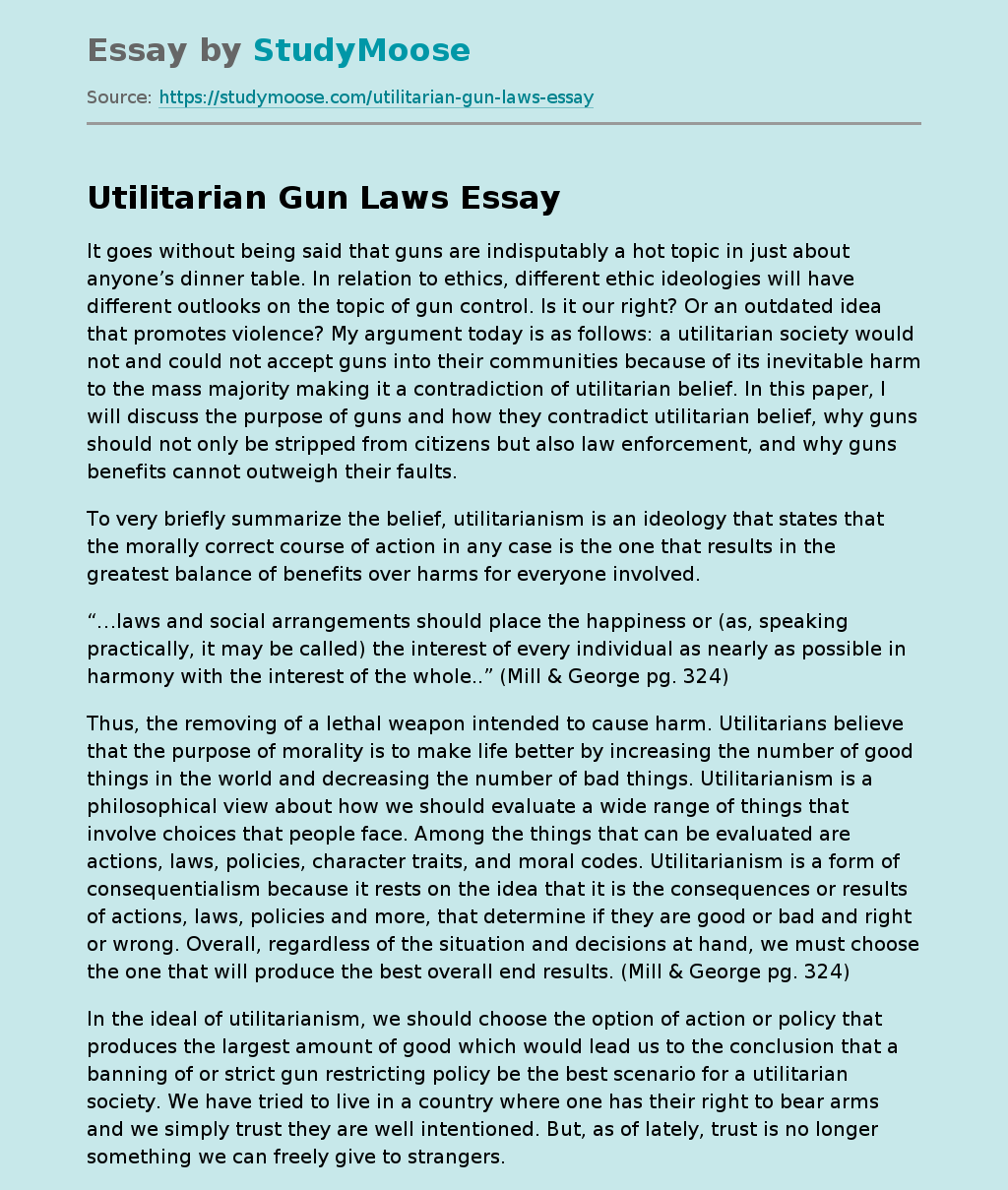