A Utilitarian Argument in the Ford Pinto Case

In 1971 Ford Motor Company decided they wanted to create a compact car that could compete with the other Japanese manufactured cars. It rushed from its inception to its actual production. In the end, these cars proved to be one of the most dangerous ever produced because of their extreme flammability in instance of rear impact collision. The decision by Ford to not recall any of its cars, and not fix design flaws, conceal the truth of their mistake and roll the dice future incoming lawsuits, damages and loss of human life is the one that I will dissect.

Turn in your highest-quality paper
Get a qualified writer to help you with
“ A Utilitarian Argument in the Ford Pinto Case ”
Get high-quality paper
NEW! AI matching with writer

I will show how this action uses the “greatest happiness and greatest pleasure” form of Utilitarianism and the true moral flaws that it exposes.

Many parties were affected is this case including the Ford Motor Company employees, the shareholders, the company owners, and every single consumer or person who not only purchased the vehicles but also drove in them including the ones who were injured, burned or even killed, and not to be forgotten, the rest of the whole world.

Actually no one escapes the ripple effect of this decision. Ford Motor Company, led by President Lee Iacocca, discovered that during the sped up engineering and production process it had created the fuel tank vulnerable to fiery rear crashes because of the layout of the car. Ford realized this but made its decision to not recall the cars based of their own company formulated utilitarian cost benefit analysis and fear of negative company effects.

Ford Motor Company weighed the risk in terms of how much it would cost the company to pay for damages and loss of any human life, which was put into a numeric dollar value by the National Highway Travel Safety Administration (NHTSA) of $200,000 per life and multiplied it by the number of accidents it estimated would occur from the flaw. Ford Motor Company calculated that the cost of compensation for death, injury and damaged cars was significantly less than the cost of recalling all the vehicles with the rear design flaw. Basically they thought they would save money, keep up their shareholder price, and have less damage to all involved by not doing anything except “taking it on the chin” with regards to predicted accidents caused by the accident prone fuel tank. They also assumed that if they made a recall, their share price would plummet and shareholders would lose money, and that possibly employees would lose jobs. Ford Motor company did a really did a neat job of estimating life values and social components cost of property damage, insurance costs, legal fees, employer losses, funeral, assets and value of each human life in society. They even concluded they would need to pay 87 million dollars less by doing no recalls and just paying for these other future damage costs.

However there is a dominant if not obvious consideration that carries more importance than just economics and Ford’s revenue. First of all, consider the possible damage to the company’s reputation created by media and public when having multiple accident from the same automobile model. The company could lose big from media and public backlash. Second, in line with utilitarian factors, Ford calculates all the collateral damage in terms of money and nothing else. Money creates pleasure for some, and pain for others. Ford calculates money as a positive value, and that is all. It seems really ideal that when creating a calculus in utilitarian ethics to think in terms of dollars because dollars carry a numeric value anyway! The decision not to recall the cars and let the accidents occur loses utilitarian units of value in terms of obvious life factors. It is also so narrow minded that I would consider it not rational. First, it is focused way too much on numeric dollar values when considering human injuries, company futures, and life lost. The decision really applies Jeremy Bentham’s idea of more pleasure (money) for the most people is the right thing. But you must consider human life in terms of a quality like John Stuart Mill’s idea for happiness and quality of life, and for those lost and for those who grieve afterwards, for the hate that is created, and the pain and suffering.

Second you have to think in terms of the imminent possibility of Ford’s reputation to be ruined beyond foreseeable repair with the unsafe cars. For a non-corporate minute, don’t think in terms of insurance claims, lawsuits paid, and annual profits gained or lost, but for competitors looking at the company as stupid, and the American public devaluing Ford in their own minds when they find out the truth about the cover up. Consider negative ideas forming in the minds of the American public as they look to the foreign auto makers to seek retribution on Ford by using their own consumer given purchasing power, and hurting the domestic economy by buying foreign cars and labeling Ford Motor Company, a company founded over 70 years prior by Henry Ford from Detroit, as a fraud and never to be trusted again! Anyone in the Ford family could not have been thinking rationally if they made the decision not to recall because they were risking too many important values that did not carry immediate economic value in 1971, but certainly did after 1976 just five years later! Ford Motor company, by their own calculations, saved 87 million by making their decision to not recall cars. This was a seemingly good consequence for Ford Motor Company, only until four people died in 1972 and other incidents happened that created a downward spiral for them.

However they should have bore the cost of the recalls as a way of upholding their own company character through honestly admitting their technical mistake, which in the end, has a lot more value. Also sparing lives adds tremendous moral value to a decision that corrects the problem and announces it as it is which is an engineering design flaw that they are aware of. Instead of doing things as they did, Ford Motor Company could have tried to recall all vehicles that were on the market at the time, and spent the extra money and time to correct a mistake that they “deeply regretted.” The president would not need to emphasize how they rushed their production to compete with another foreign company, but instead insisted that they as an American based company needed to fix the problem for the sake of safety of the American people, by which they held more dearly than their own profitability.

By this alternative way, they uphold American Christian values which were at the heart of the inception of the United States values and hold higher moral value any Japanese auto company can hope to have. They could convince the consumer markets, and the media that this decision is why Ford is who they are, and although they may not be as fast as other auto makers, at least they are concerned about doing things the right moral way. This alternate idea produces more good for more people using a utilitarian way of thinking as well. Creating a stable product with quality in mind is a solid business decision and will create profitability for years to come. Selling cars up to current safely regulations to people to benefit their well being and making the country in which they exist in better as well as
all those who purchase their vehicles around the world better.

Ford Motor Company’s decision uses ideas from one of the utilitarianism founders in Jeremy Bentham. However it is narrow minded because it only considers the aspects of living and society status in terms of money values at the current time. If we lived in a world where money was equally valuable to reputations, emotions, and even life then their decision may be utilitarian but it is still not ethical. The future is what costs them. However that is not the world we live in and a company such as Ford needs to think about the multiple negative outcomes of a decision like the Ford Pinto example. They should have recalled all the Pintos because the good still outweighs the bad in the end. It is a wiser business decision, moral, ethical and it applies utilitarianism.

A Utilitarian Argument in the Ford Pinto Case. (2016, Mar 06). Retrieved from https://studymoose.com/a-utilitarian-argument-in-the-ford-pinto-case-essay 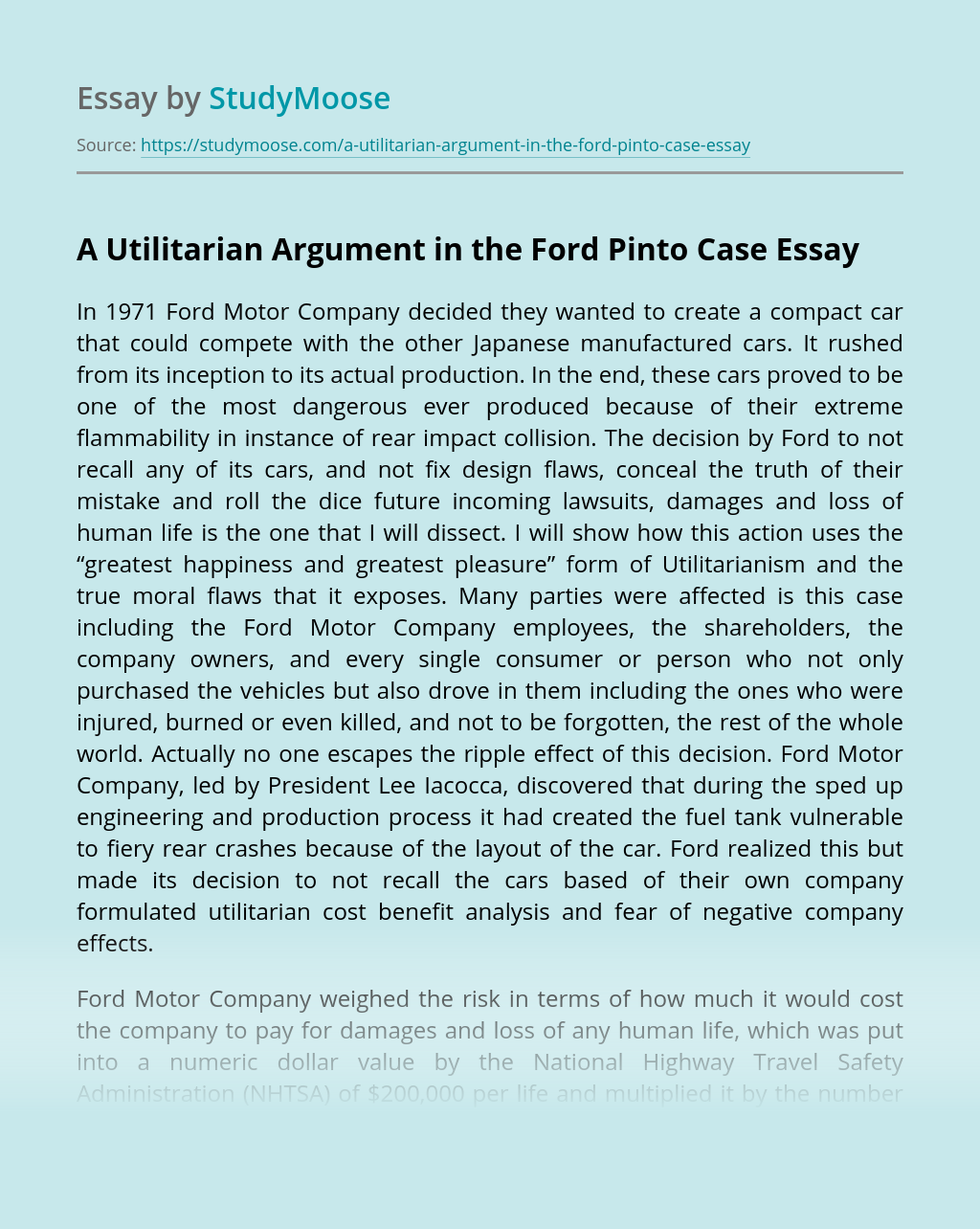 Turn in your highest-quality paper
Get a qualified writer to help you with
“ A Utilitarian Argument in the Ford Pinto Case ”
Get high-quality paper
Helping students since 2015
Stay Safe, Stay Original