Ford Motor Company was founded by Henry Ford in 1903; the company had produced over 260 million vehicles with about 370,000 employees today. Although Ford obtained significant revenues and profits from its financial services subsidiaries, the company’s core business had remained the design and manufacture of automobiles for sale on the consumer market. Since in the 1970’s, the automobile industry had seen an increase in competition, especially foreign competition, mostly from Toyota & Honda which led to overcapacity within the industry (estimated at 20 million vehicles).

In an effort to lower cost of developing, building cars and increase efficiency in 1995, Ford developed a restructuring plan known as Ford 2000 which included merging its North American, European, International automobile operations into a single global organization. Ford 2000 was focused on reengineering of some key projects such as Order to Deliver (OTD) and Ford Production System (FSP) whose primary goal was to reduce OTD from more than 60 days to less than 15 days. With Ford’s traditional business model, its goal was achievable but would it ‘survive’ at the long run?

In mid-1996, Ford attempted to overcome information constraints in its new global approach, by launching a company-wide intranet, and by early 1997, Ford had expanded upon that system to include Business-To-Business (B2B) capability through which the intranet could be extended in a secure manner beyond company boundaries, potentially connecting Ford with its suppliers.

As a result of this, Ford teamed up with Chrysler and General Motors to work on the Automotive Network Exchange (ANX) whose aim was to create consistency in technology standards and processes in the supplier network i.

e. providing a unified communications standard through the internet to enable its suppliers provide common technology for all manufacturers just like Dell’s model.

Ford’s focus was to improve its supply chain & delivery process by making information on its web site more accessible and useful which was built on a model implemented by Dell computers known as “Virtual Integration”. Virtual Integration is a term used to describe the use of internet to replace physical components of a company with information.

Dell’s vertical integration system helps improve data centre efficiency by responding to selected business requests in split seconds. It also helps to improve operational costs by controlling the complexity of the company’s infrastructure and improving its speed of response. It reduces inventory and increases speed and overall, offers the advantages of tightly coordinated supply chain. “Virtual integration means you basically stitch together a business with partners that are treated as if they are part of the company” – Michael Dell.

The issues Ford faced was mainly keeping large inventory which resulted in low profitability and at the same information sharing was a challenge. Ford could not communicate effectively in and outside the company because the lacked the information technology capacity for that. As Teri Takai, my decision would be to implement the supply chain strategy of integration using the model of Dell computer. Dell’s direct model can be applied to many areas of Ford’s operations. Ford will have to manage their unique relationship with their tier one suppliers while making this transition as well as modifying Dell’s supply chain model to apply to its tier one suppliers. In order to overcome this challenge; three options were proffered which are:

Large Inventory – Ford currently holds a high inventory which will in turn tie down its working capital for example the loan received from the bank might affect it share price as a result of interest rate. – Cycle time reduction – the company current Order to Deliver (OTD) process is between 60 and 15 days. – The company’s reduction in its supplier base to have a longer term relationship with fewer suppliers known as Tier one suppliers. These tier one suppliers have no capital to invest in the new technology that Ford seeks to get into and this might have an impact on the proposed I.T. – Inadequate flow of information – Ford is a global company and the flow of information between Ford and its other locations is still a challenge where information is not easily transported.

The Company does not have to deal with change. Pros: Ford doesn’t have to train its employees and avoid the hassle of trying to persuade its suppliers to use new software which means everyone is “happy being in their comfort zone” Cons: Business will remain unprofitable, inefficient and ineffective which will not maximize the wealth of its share holders.

Pros: By organizing its business process around these principles (OTD), Ford will be delivering value to customers at a competitive price. The company will also achieve cost reduction at the same time making the customer happy through implementation of smarter business process. Cons: This will require extensive training.

The best suppliers should be chosen which will provide quality product & services for Ford in order to maximize profit and reduce inventory. Pros: This will enable Ford to deal with best in class suppliers whose quality will reflect in the final product of Ford which will in turn improved customer satisfaction. Cons: It will be time consuming in carrying out this process.

Based on the current scenario, alternatives 2 and 3 are recommended. Ford will need to improve its business processes & information system on the principle of Order to Deliver (OTD), quality and continuous improvement which will deliver value to the customer at competitive price. This will also result in cost reduction and low inventory. In addition, Ford will need to keep their Tier 1 suppliers on track with them and develop direct links to the other suppliers and should invest in setting up a more web-based supply chain system that would allow the Tier 1 suppliers to use information technology capabilities.

To implement the above mentioned alternatives, the points below should be considered.

As Teri, I would consider using the same method Dell Computers because it helps improve data centre efficiency by responding to selected business requests in split seconds. It also helps to improve operational costs by controlling the complexity of the company’s infrastructure and improving its speed of response. (I.T) It reduces inventory and increases speed and overall, offers the advantages of tightly coordinated supply chain. It provides an avenue to be competitive and still go above BEP (break-even point). 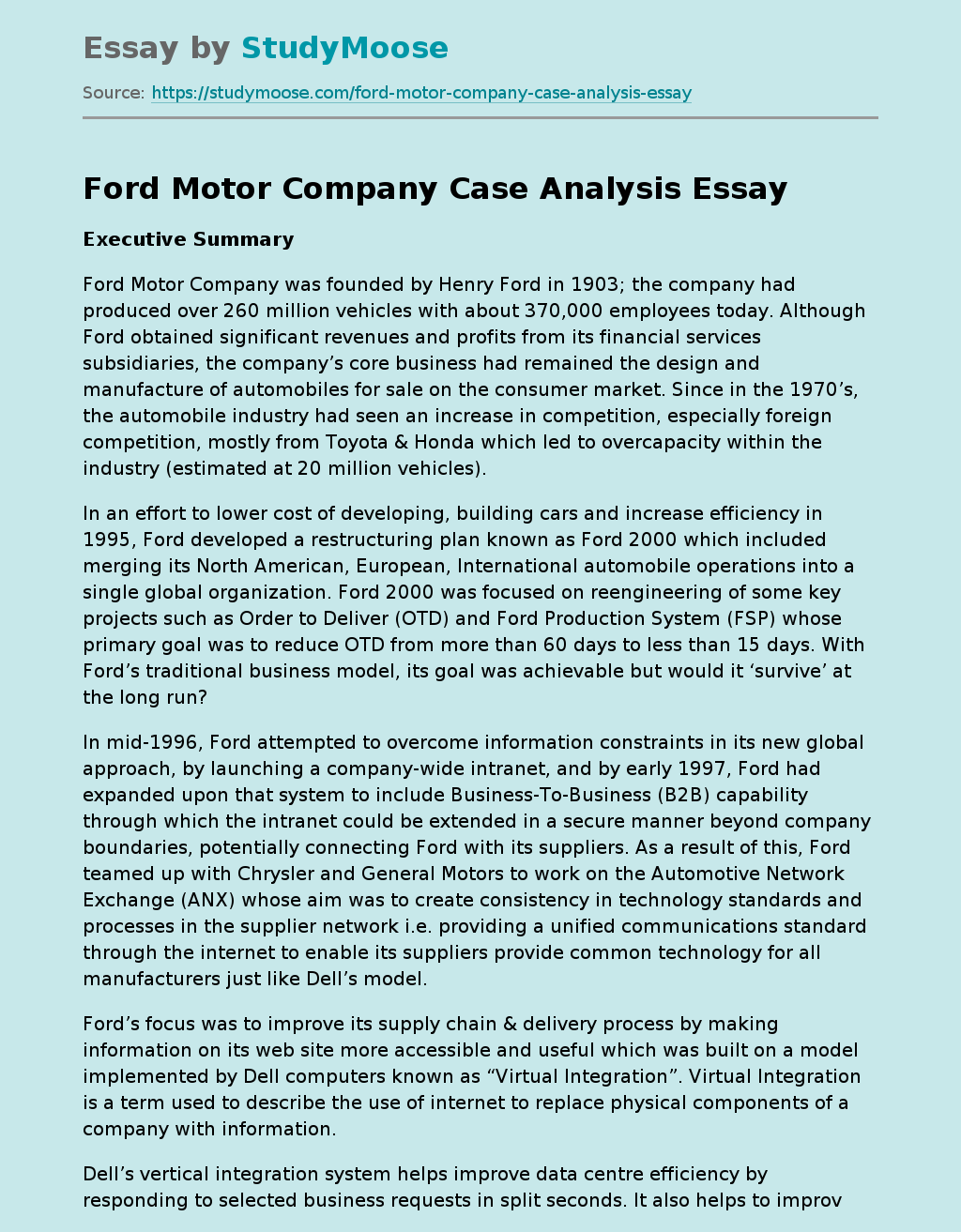