Leadership is guiding people towards productive results to achieve the goals of the organization. An effective leader has the ability to motivate and influence others. The following sources of power represent the engine of influence that they use effectively and ethically to achieve their goals, however, true leaders are supposed to make the employees work hard by giving their efforts and making sure that the goals and the mission of the organization are achieved.

Don't use plagiarized sources. Get your custom essay on
“ Alan Mulally and Leadership ”
Get custom paper
NEW! smart matching with writer

To be effective every leader should have the following competencies: Vision, Integrity, Honesty and Values Releasing Potential and Energy. The content of this paper is to outline the roles of leadership and how it affects organizational performance. It then discusses the role of Allan Mulally’s, CEO of Ford Motor Company, and leadership style. The paper also presents how mulally decision to set a goal has increased the company’s performance and mentioning how Allan Mulally’s openness has gained him trust and helped him to reach his goal.

Alan Mulally moved to Ford in 2006. He had worked at Boeing since 1969. He had been chief engineer for development of the 777, and was later Vice President of Engineering for commercial aircraft. Mulally had no sales experience, and he wasn’t a “Detroit car man, “Much less a car man at all. He sold his Lexus after moving to Dearborn. What’s most impressive is Mulally’s “results oriented” leadership style. His management is crisp and authoritative, although he defers to the firm’s design experts on the minutiae of the product lines.

But on the big questions of the company’s past mistakes and where it’s headed, Mulalley made key decisions that placed Ford in good stead. When mulally testified before Congress in December 2008, along with GM’s Rick Wagoner and Chrysler’s Robert Nardelli, he announced that Ford would be able to survive the recession without a bailout. In 2006, Alan Mulally became the CEO of Ford. At the time, the company was relying heavily on their truck revenue and had several other lines that were not properly supported to earn the best revenue.

Some of Mulally’s first decisions were to sell off some of their sub brands, namely Jaguar and Land Rover, and focus more on the small car lines that are becoming more popular with consumers. With a focus on the small cars, this would allow for the company to benefit from economies of scale and increase the profits from selling those cars. He also took out a $23 billion loan to help avoid needing the bailouts that would come 2 years later. Mulally threw away the politics involved in the vice president structure, forcing the weekly leadership meeting to be more about the success of the company than the squabbles of those leading it.

He insisted that the vice presidents actually admit to their problems so they can be handled; having operations be labeled either green for going well, yellow for caution, and red for problems. The vice presidents were apprehensive of this at first, afraid to admit their problems and failures, but Mulally made it apparent he wanted to know these issues to resolve them, instead of to sweep them under the rug or assign blame. Finally, Mulally put forth a new mind set for the company; One Ford, involving a One Team, One Plan, One Goal setup.

One Team focused on uniting the individual group in Ford into one cohesive team, each member helping out other members, no matter what project they are on or division they are in. One Plan was about restructuring to operate profitably, accelerate development to get new products that customers would want to buy out sooner, finance the plan, and work together as a team. Finally, One Goal was all about developing an exciting viable Ford with profitable growth. Mulally have a more hands on approach to leadership. He wants to know exactly where the company is and how they were going to get someplace better.

This is shown with his color coded operations technique with the vice president meetings. His answers to problems weren’t just to shrug them off and go back to the status but rather how to proceed from where those problems brought them. Alan Mulally demonstrated organizational innovation; he used different methods of production and administration. Conveying his ideas and leadership, mulally exhibited his innovation that comprised the ideas from outside Ford in conjunction with those ideas from within Ford Motor Company.

The message he portrays involves planning initiation, execution, selection, and implementation of the objectives to achieve the goals set forth by his administration The success of an innovation is connected to a market forecast of customer needs and wants as well as effective management of the innovation process. Concentrating on a fewer products to produce with a lot of improvement and service innovation involving the introduction of a new service that meet the customers’ expectations. He has high regard for executive management and maintains open communication.

Mulally has an agenda to serve and satisfy not only customers, but employees as well, increase market share, increase profits, and communication is at the top. Alan Mulally has a proven effective leadership style. He is persistent with innovative processes that address issues within the organization to ensure successful development. His management responsibilities include reducing the risk; managing the customer interface; training and managing staff performance; and engaging Ford’s executive team.

Highlighting how successful his tactic can be Mulally has insured his reputation as one of industry’s great leaders; it is well worth paying attention to what he says and learn from his leadership skills. Any successful leader has to know the plan, and areas that need special attention. There are challenging times to be a leader whether it is a cultural crisis, financial crisis, or environmental crisis, but, if one can learn from the experience of a leader such as Alan Mulally, an organization will do just fine and be one of the respected models to follow and learn from. 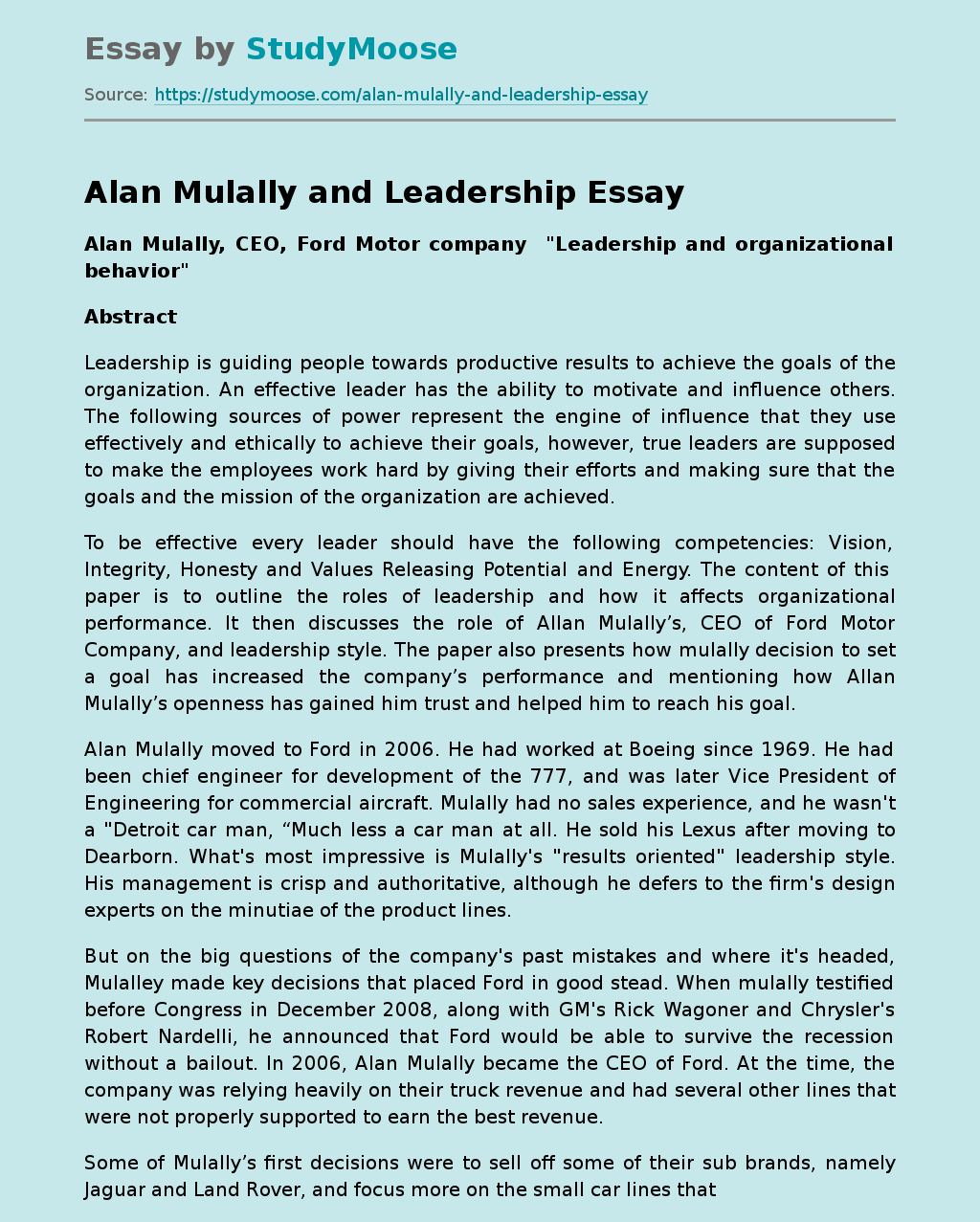