“A Loaf of Bread” by James Alan McPherson

“A Loaf of Bread” by James Alan McPherson is a story about a man named Harold Green who is accused of cheating customers due to his overpriced products being sold at one of his supermarkets. Throughout the story, Green is faced with a plethora of different obstacles that he has to overcome in order to prove not only to his family, but to himself that he is a honest and caring man.

There are many different lessons and themes you can pick out from this story, but one in particular that I feel is important is the relationship between Harold Green and Nelson Reed.

Don't use plagiarized sources. Get your custom essay on
“ “A Loaf of Bread” by James Alan McPherson ”
Get custom paper
NEW! smart matching with writer

Both men are introduced as complete opposites of each other, but as the story progresses they both discover that they are very much alike and the animosity they once shared was nothing more than a mere misunderstanding. By the end of the story, they both learn a lot from each other and that judging someone without knowing their position or seeing things from their perspective can often lead to false verdicts.

“I did not make this world,” he repeated. “I only make my way in it” This quote perfectly describes Harold Green and his perspective on life. In the beginning of the story, Green is introduced as a selfish but honest man. He knew that he was overcharging customers in his store, but to him it was something he had to do in order to provide for his family even if it meant losing them.

“What is the color of these people?” he asked.

“Black,” his wife said. “And what is the name of my children?” “Green.” The grocer smiled. “There is your answer,” he told his wife. “Green is the only color I am interested in.” This furthermore shows that Green starts off as a selfish man. He chose to ignore the needs of his customers due to his lust for cash. Nelson Reed on the other hand, was introduced as a very proud and caring Christian man. He believed that what Green was doing was wrong, and felt the need to stand up for his people.

Although both men seem to be complete opposites of each other, they still shared similar characteristics. They were both very stubborn and determined to stand up for what they believe in. Green at first, did not want to give in to his wife and give away his products for free. He refused to because he believed he was right, and that he needed to stand up for himself. Reed, although different from Green, shared a similar perspective about the whole situation. He felt the need to stand up for himself and his people. As the two characters progress, they both come to terms on one thing; money rules the world.

“The only thing that matters in this world is money.” This quote by Reed depicts a better understanding between the two. Reed is finally starting to see things through Green’s eyes and realizes that he would’ve done the same thing as Green if he had owed the store.

“Place yourself in my situation… Say on a profit scale of fifteen to forty percent, at what point in between would you draw the line?” “Forty? Maybe even forty-five or fifty?” the grocer breathed in Reed’s ear. “In the supermarkets, you know, they have more subtle ways of accomplishing such feats.” Reed slapped his coffee cup with the back of his right hand. The brown liquid swirled across the counter top, wetting the books. “Damn this!” he shouted.”

Although Reed is reluctant to believe he is like Green, he is now putting himself in Green’s shoes. In a way, it’s almost like Reed is giving in to himself. Green does the same thing. One morning Green decides to give in to himself and give out his products for free.

In the end, as Green is in the middle of giving out items, Reed walks in and insists that he pay for the loaf of bread his wife had taken for free earlier. “I think it was brown bread. Don’t that cost more than white?” “In my store, yes,” Harold Green said. He rang the register with the most casual movement of his finger. The register read fifty-five cents. Nelson Reed held out a dollar.

“And two cents tax,” the grocer said. The man held out the dollar. “After all,” Harold Green said. “We are all, after all, Mr. Reed, in debt to the government.” This last quote from the story sums up the change we see in both characters. Green has now learned that there is more to life than just money and himself, whereas Reed learns to respect Green’s profession. The fact that Reed paid full price for the bread shows that he understands Green’s position in contrast to the beginning where he saw it as a crime how Green had overpriced his items. In the end, both men had learned valuable lessons, and although at first were very different and opposing of each other, came to terms that they are no more than two similar people making money for the government.

“A Loaf of Bread” by James Alan McPherson. (2016, Nov 21). Retrieved from https://studymoose.com/a-loaf-of-bread-by-james-alan-mcpherson-essay 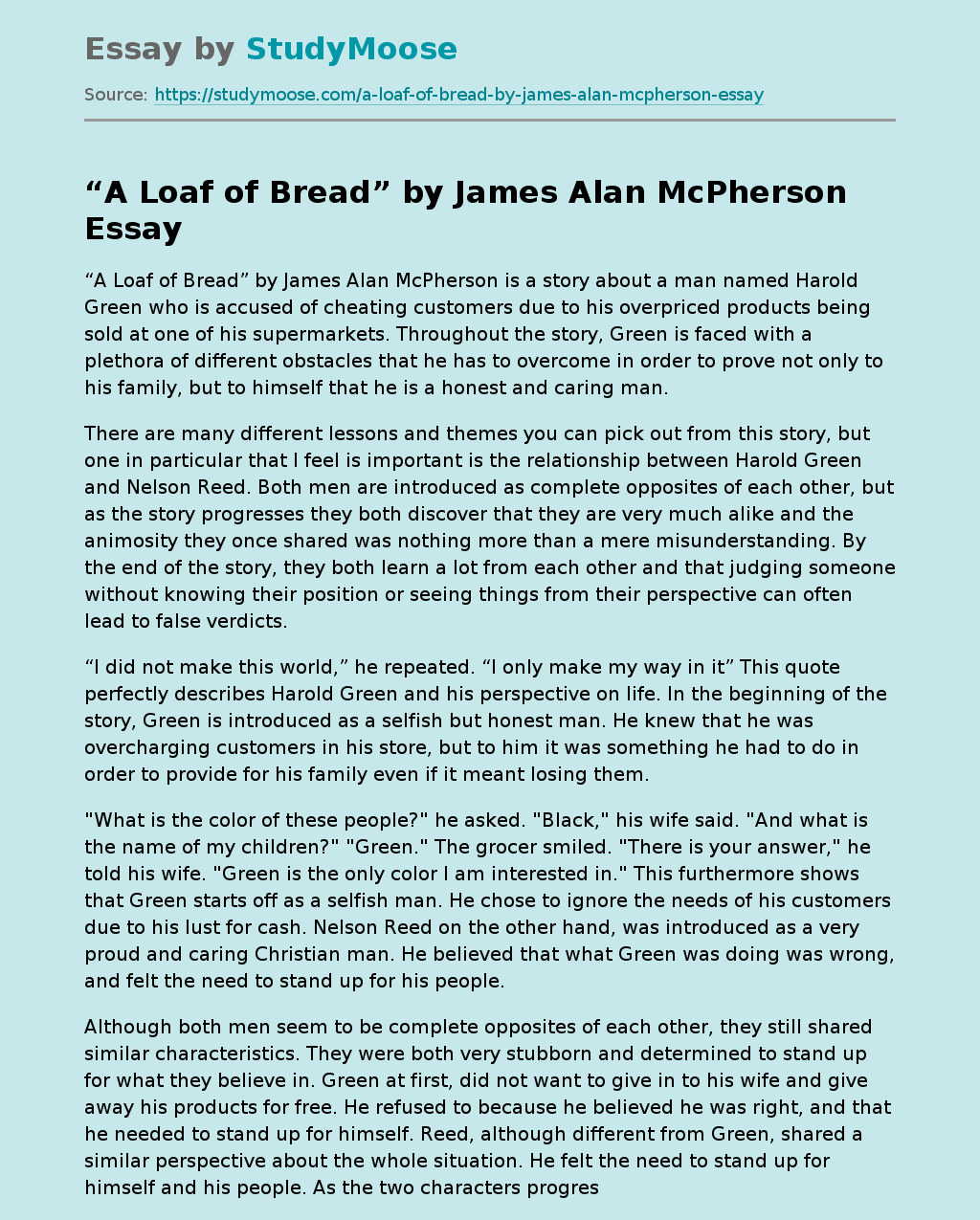