Question 1. During the year 2006, Ford Motor Company suffered its greatest operating loss to date at the expense of $12.6 billion. A year later in 2007, things didn’t improve much as Ford published a $2.7 billion loss. This corresponded with increasing deterioration in market share, with the bulk of these losses being recorded by other rivals. Ford had apparently fallen down a domino effect, and found itself in a hole it was struggling to surface from. This was all gearing up to the three-year recession that hit the U.

S. and Global economies exceptionally hard. Ford’s competitors, General Motors and Chrysler, found themselves also having a hard time to get a foothold suffering such losses that both companies needed to ask the government for massive bailouts while also declaring insolvency.

Ford was apparently heading for the same dreadful bailout, however then Alan Mullaly stepped in as the brand-new CEO and implemented a series of vital tactical maneuvers. These tactical maneuvers that he coined as “One Ford,” aided them in getting a grip out of the hole in which they dug for themselves by losses in market share.

One such important strategic maneuver made use of by Ford was the restructuring of its product line. It did so by standardizing elements and making a stable of products that is more plainly specified for each market segment (Senna, 2013).

Some benefits Ford has achieved through reorganizing its product line come from standardizing components globally and making a stable of products that is more clearly defined for each market segment (Senna, 2013). Before the change in demand, vehicles in Europe verses the U.S. were made with different components which built variations for their respected continents. These different unique components complicate production and with that complication came more cost. Ford then, under Mullaly’s direction, began to address this problem by building different models with the same or similar high quality components over the globe (Zboch, 2009). They use common parts to streamline the production line and reducing the number of unique vehicle parts. By standardizing components and reducing the number of different platforms it offers, Ford is able to achieve better economies of scale and flexibility, which contributes to lower production cost for each new product (allowing them to produce hybrid and electric models more affordably for consumers) and also shift production to address changes in customer demand quickly (Ky, 2012).

The Focus and Fiesta lines now use a single platform for each international market. Ford has also started making a stable of products that is more clearly defined for each market segment (small, medium, and large cars, utilities, and trucks), which also comes with benefits for the organization. Ford reduced its nameplates portfolio from 97 to between 25-30 and also brought over the Fiesta from Europe to the United States. The reduction allowed them to focus on global customer demand more intimately, by adapting the vehicle platforms to meet specific regional needs and produce vehicles that customers really want. This change still offers customers a large range of options despite the reduction in Ford’s nameplates (Zboch, 2009). Question 2.Ford has made various product modifications to the Ford Explorer with emphasis on safety and improving the customer experience to increase customer loyalty. They are consistently thinking of new design modification and exploring new opportunities with regards to new technology.

They are using these new technologies to create new solutions for recurring safety problems. One such new technology is the curve control technology which works by measuring how quickly the vehicle is going and comparing that with how quickly the diver is trying to turn. When the vehicle is not turning as much as the driver is steering it activates and applies the precise amount of breaking required on each wheel to enhance the traditional stability control system. Ford also introduced the radar-enabled adaptive collision warning system to the Explorer, which helps drivers avoid potentially dangerous crashes by using radar to detect the position of other vehicles and warn the driver of these vehicles. Ford also instituted the first rollover-activated side curtain airbags (called Safety Canopy) and the first inflatable rear seatbelts into their Explorer (Ford, 2013). Ford also puts emphasis on going green, as the engine of the Explorer can have an EcoBoost which gives the engine high horsepower without losing fuel economy (Ford, 2012). Question 3.The new products coming out from Ford have recently put more attention on greater fuel efficiency as they have become a leader in fuel economy. Before the recession, Ford and most of its competitors focused more on manufacturing vehicles with high fuel consumption and largely overlooked the increasing market for small cars.

The oil shock of 2008 hit it resulted in rising fuel costs and brought about a change in consumer demand as a trend developed for “green” fuel efficient small cars (Zboch, 2009). Ford then changed its focus to a science-based strategy to reduce greenhouse gas emissions and also increase fuel efficiency of their vehicles. With this strategy they developed an assortment of hybrid vehicles, which can qualify owners for a tax deduction and lower gas prices throughout the year. Ford has moreover enhanced its product line to be more “green” with the EcoBoost engine that has improved fuel-economy producing responsible resource saving results. Ford is also exploring and investing in alternative fuel opportunities in order to stay on the cutting edge of innovative new alternative fuel technologies like fuel cells, hydrogen power, and ethanol fueled engines. All these fuel saving innovations and opportunities will help increase its market share, while also giving them a competitive advantage (Ford, 2012). Ford has moreover made enhancements to safety technologies like side curtain airbags and inflatable seatbelts, and driver assist technologies like the Curve control and radar-based collision warning systems.

Ford has become known as global leaders in vehicle safety by offering these innovative new enhancements ( Ford, 2013) . Question 4.Mullaly made a strategic rationalization when he reversed the discontinuation of the flagship brand line of Taurus. Taurus was once one of the most successful Ford’s cars and he was astonished that Ford had initially planned to discontinue this powerful name (Dolan, 2009). It costs many billions of dollars to build the brand loyalty that the Taurus name invokes and for Ford to throw this significant name recognition away seems to be a waste of a huge asset and a major oversight of the corporation. Mullaly made this fact aware and then strived to recharge the brand in order to bring it back to its former glory. The revamped Taurus is sleeker with a more muscular design and offers a range of technological options, from safety features to the voice-activated entertainment system (Dolan, 2009). Furthermore Mullaly made a strategic contraction by divesting Ford’s noncore brands like Aston Martin, Jaguar, Land Rover, Volvo, and Mercury. This dissociating allowed them to give the necessary focus they need to revitalize the central Ford brand.

Also they are able to contribute extra attention to revamping their core-platforms by concentrating on accessible market opportunities in order to increase market share, not just here in the U.S but on a global scale (Zboch, 2009). Although this divesting could be considered a form of strategic inconsistency, because these names have brand loyalty and name recognition in and of itself. By selling these brands off, Ford is losing the valuable brand equity that leaves with them, but Mullaly wanted to reinstate the Taurus for its brand equity and not lose the loyalty around that brand. Although it Taurus was once a core-platforms, it still shows somewhat of a strategic inconsistency. Question 5. In the past five years Ford has made changes to their product lines that follow their four pillars. These pillars are quality, green, safe, and smart. In the quality section they have made changes by buying the best quality parts possible and standardize the components that are used in many different platforms to get the best quality at the lowest cost possible (Ford, 2012).

They are in addition working to design and improve engineering characteristics in line with the customer’s wants and needs for their vehicles. An example would be the hands-free Sync entertainment system. In the green pillar, Ford has been developing new ways to produce more fuel efficient vehicles. They have made great leaps in changing to a more eco-friendly manufactures that continue to improve their products fuel-economy (Zboch, 2009). In this example they have started to produce hybrid vehicles and an EcoBoost engine which they are very excited about. For Safety category, Ford is continuing to develop the best quality safety technologies for their vehicles, with the thought of greater protection and avoidance measures on their mind. They are the first to offer systems like side-curtain airbags and inflatable seatbelts in a large variety of platforms and in addition have created new technologies like the curve control and radar-based collision warning system (Ford, 2013).

The changed in the smart pillar, Ford has made strides to deliver technologies that not only make the customers riding experience more entertaining, but also make the gives the vehicle added safety. An example of this is the Sync system which works through voice commands and in addition the newly improved safety technologies. Ford has been using these pillars and will continue use them into the future, as guild-lines to be followed as they make changes to their product lines (Zboch, 2009). They believe that with this strategy they will be able to stay innovative in order to create a competitive advantage that will lead to an increase in global market share. 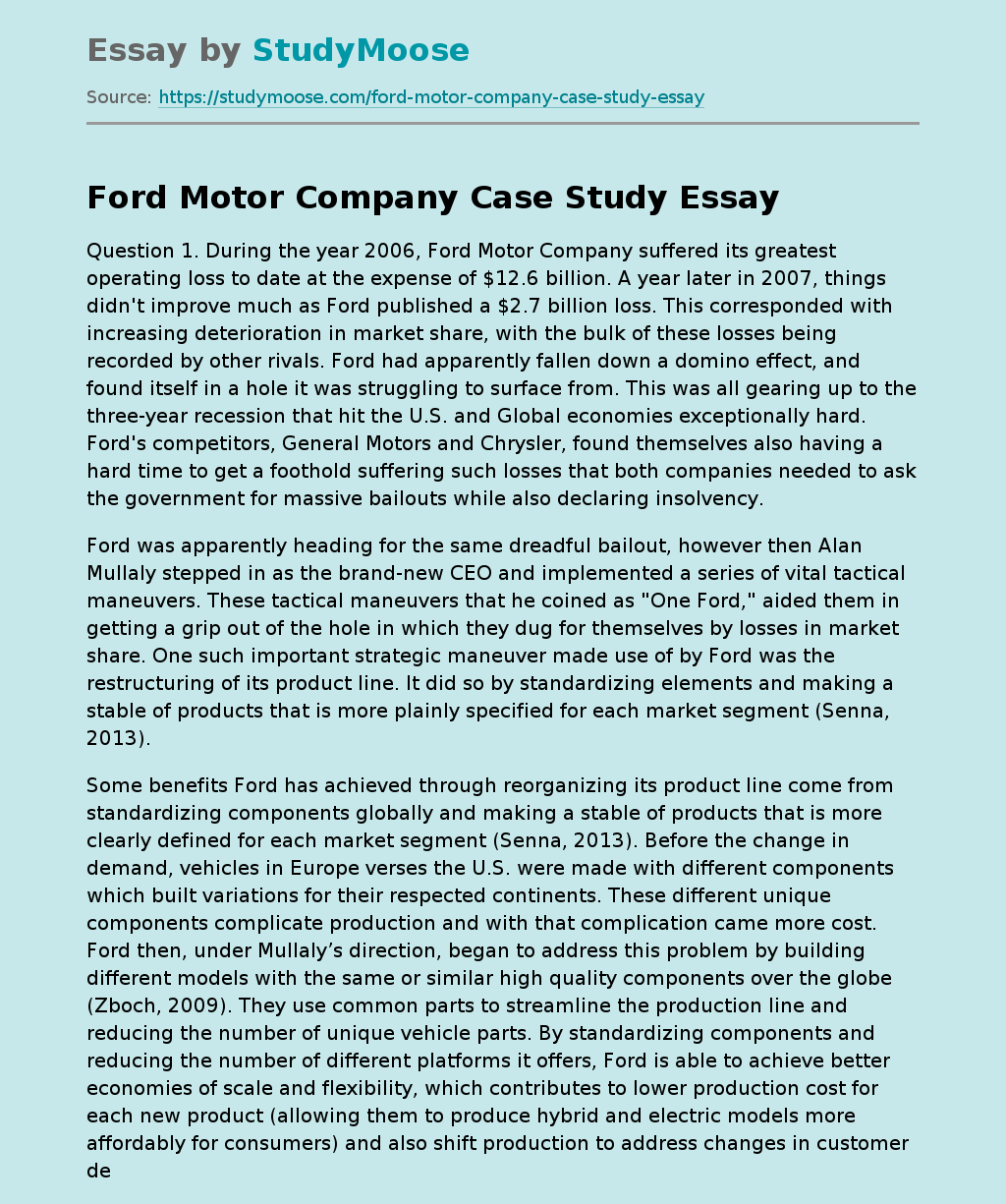