Traditionally ‘maximizing’ profits has been considered to be the objective of any company. Not any more….This criteria has now been discarded. Now companies are supposed to have multiple objectives, monetary as well as non-monetary. There are short-term objectives as well as long-term ones. Strategists are supposed to prioritize all such objectives, keep an eye on the competitors and government policies, so that there is clarity and ease of decision making in situations where there is an apparent clash of objectives.

While planning for long term objectives, the company is supposed to remain competitive.

It was in 1974 that Michael Porter, who had been working on a new sub-field of economics known as Industrial Organization (IO), prepared a ‘‘Note on the structural analysis of industries’’ which is considered to be the idea behind the five forces model of Porter in subsequent years (Karagiannopoulos et al, 2005). In 1980, he published his first book, Competitive Strategy, which owed much of its success to the ‘‘five forces’’ framework, that this paper focuses on (Porter, 1980).

This framework has since been regarded as a strategic tool to figure out the relative strengths of a company, and decide about the possible strategic policies that a company can adopt to make way for a long term survival.

The company can acquire competitive advantage on its rivals on account of marketing efforts, brand building, value creation, innovation, operational efficiencies etc. But more important is to sustain the advantage, for which the company will have to take care and devise adequate policies for its customers, suppliers, competitors and other stake holders.

The five forces, defined by Porter include;

In case of Ford Motors Company the Five Competitive Forces can be typically described as follows:

In a market where speed to market is extremely vital for beating the competition, Ford’s dependency for such key components on its associate companies with whom it has long term agreements will of course help in warding off any appreciable threat from the supplier side. Ford has been able to maintain good working relations with its suppliers is evident from the statement of Alan R. Mulally, President and Chief Executive Officer of Ford during the company’s 2006 annual report when he sought to highlight the outstanding supplier, dealer and union partners (Datamonitor, 2007). 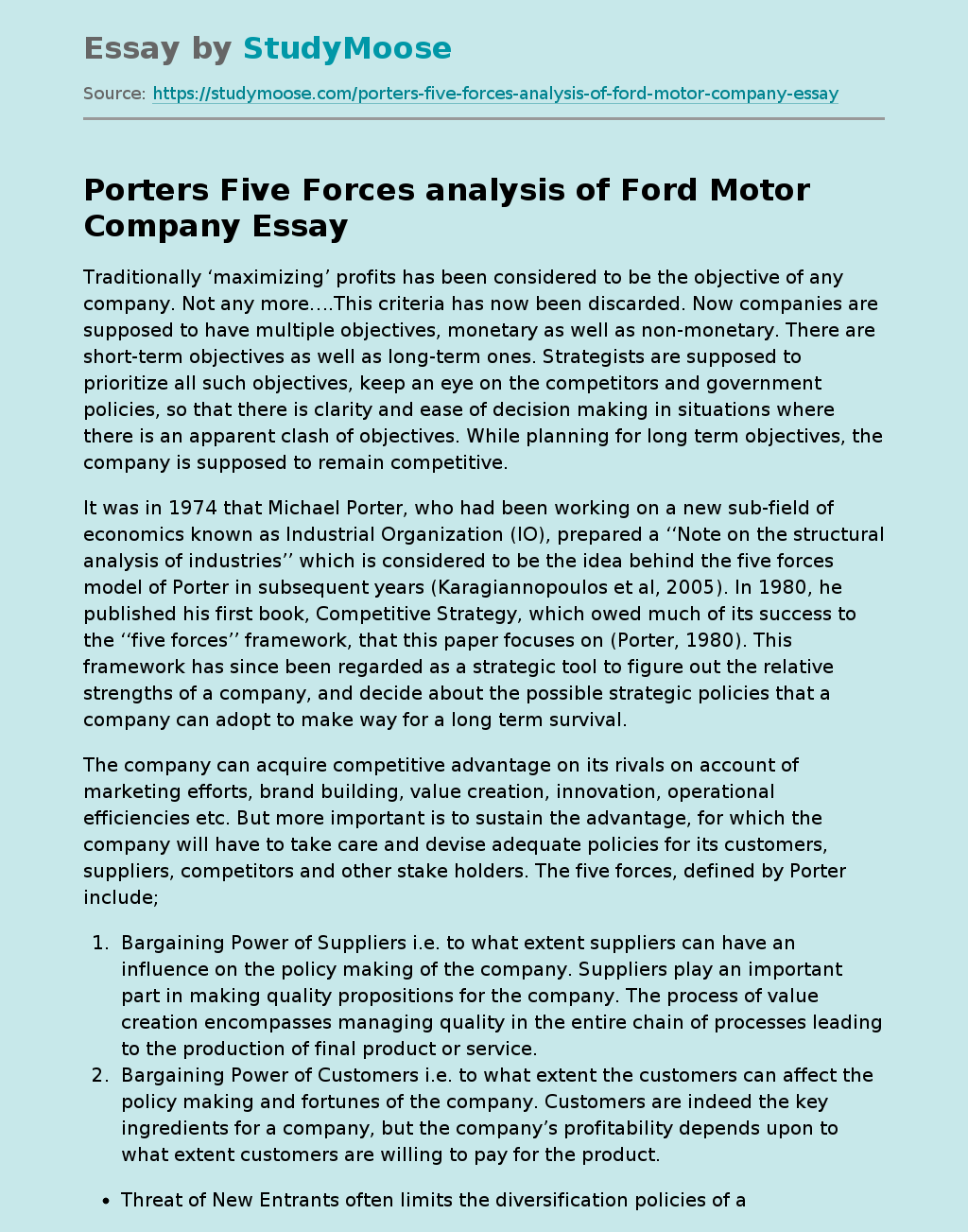