* Main and sub ideas of the case.

The main topic of the case was the problems caused by defective or damaged seats. TMM USA’s seat problem was threefold. The first was the actual defects with the hooks and the damaged caused by cross threading by employees when installing the seats. This problem led to the second problem, which was the departure from the Toyota Production System (TPS) when dealing with the seat problem. Rather than fix the problem with the seat when it happened, they continued with the car’s production and worried about the seat afterwards.

Turn in your highest-quality paper
Get a qualified writer to help you with
“ Toyota Motor Manufacturing Case: Main and Sub Ideas ”
Get high-quality paper
NEW! AI matching with writer

And this led to the third problem, a build up of cars with seat problems in the off-line operation area.

In reading the case I noticed three subtopics. They were the use of TPS in TMM USA, the problems caused by the increase in the Camry seat options and the taking on of all the wagon productions for TMM, and relationship between TMM USA and its seat supplier Kentucky Framed Seats (KFS).

In 1988 TMM Japan began production on a new plant located in the US. The plant was modeled after the Tsutsumi plant and was to replace the majority of the Camrys that were being imported from Japan. As part of its setup the Tsutsumi production line was copied and employees were trained in the TPS process. TPS is based on reducing costs through the elimination of waste. TPS relied on two themes Just-In-Time (JIT) and jidoka.

JIT means that new parts are produced only when needed. Jidoka is the stopping of production when a problem is noticed and fixing it then and there. TMM USA implemented these methodologies throughout its operation departments.

TMM USA also had a remarkable relationship with its seat supplier, in which the production of the seats followed a pull system methodology. This meant that KFS did not produce any seats until TMM USA requested them. With KFS only 30 minutes away from TMM USA there was very little delay in the request for a seat and its arrival at TMM USA. Everything was working smoothly until new options were added for the Camry’s seats and the TMM USA plant was made responsible for the production of all of TMM wagon production.

* Critical discussion of the relevant problem.

Ø As Doug Friesen, what would you do to address the seat problem? Where would you focus your attention and solution efforts?

The first thing Mr. Friesen should do is to determine if the process used to solve problems with defective seats is the best method to use, especially since it does not follow the TPS method of stopping production, figuring out why the problem happened and how to prevent it from happening again, fixing the defect, and restarting production. He should begin by mapping-out how the seat problem is currently being handled. The process works like this: 1. a team member would notice a problem and then stop production and report it before installing the seat; 2. the team leader would then tag the car to alert QC of the problem and restart production; 3. the car then went through the rest of production as usual; 4. next the car was moved to the Code 1 clinic area to see if the problem could be fixed immediately; 5. if it could be fixed immediately it was, otherwise the car was moved to the overflow lot and a new seat was ordered.

There were several reasons given for making this deviation from TPS. They were: 1. the problem was already known by the assembly team; 2. building the car without the seat assembly was easy to do; and 3. it was believed that stopping production long enough to obtain the new seat was too expensive (stoppage of one car worth $18500 for 57 seconds would cost approximately $3415 and currently it takes 30 minutes to produce a seat). The next issue that he should look at is why these cars were sitting in the overflow lot for so long. KFS was making special deliveries of new seats twice a day to replace the defective seats, but still there were cars with defective seats sitting in overflow lot for over four days. The other seat issues that Mr. Friesen should look into are the problems caused by cross-threading, breaking of the hook, and the delivery of the wrong seat by KFS.

Ø What options exist? What would you recommend? Why?

There are about five different options that I believe Mr. Friesen could follow. The first is to adjust the seat assembly team. He should determine if there are any changes in employees, processes, or training that need to be made. The second option is to rework the off-line process. There needs to be something done to reduce the number of cars sitting on the overflow lot waiting for new seats. Possibly, a system that notifies employees when a car has been sitting in the overflow lot for more than four hours could be used. This should allow enough time for the correct seat to arrive and the problem fixed. Also, if the employee already knows that the seat needs to be reordered, why can’t he reorder it right then. The third option is to redesign the seat to solve the problem of the breaking hook. Mr. Friesen did look into this and found that it would cost KFS $50,000 to redesign the seat. The question here would be how long would it take to recover the cost, is it not worth the cost to redesign it, or is there a better way to solve the hook breakage problem.

Another possible solution to this would be to have the employee spend a little more time on installing the bolt through the hook and so will be able to use more caution. The next option is to look at KFS’s production process. Why is it that the off-line team sometimes receives the wrong seat type? Does KFS perform a quality check before the seat leaves their company? They should work with KFS to ensure that KFS does a quality check before sending out the seat. The last option is to review the increase in the amount of work since the addition of seat options and the wagon production and find ways to handle it. In this option, it might be necessary to use another supplier to supplement the seats that KFS cannot produce fast enough. I know that all of these have been listed as options, but I believe that they all can be done and should be.

The reason for this is that though any of these would help alleviate some of the seat problems and reduce the number of cars with defective seats or the fixing time of them, they actually focus on different pieces of the problem. The theme behind the TPS process is to eliminate all waste and so each of these problems need to be resolved. Therefore to sum up what needs to be done, Mr. Friesen needs to identify the processes that need improvement, gather more data on what the problems are and their causes, and analyze the data to determine what the solution to the problems is.

Ø Where, if at all, does the current routine for handling defective seats deviate from the principles of the TPS?

As mentioned earlier, TPS relies on JIT and jidoka. The current routine fails to meet either one of these methods. The fact that it does not meet the JIT requirement is seen in the number of cars in the overflow lot. The cars needing a new seat should have the seat arriving just as the car arrives at the Code 1 clinic. However, since the new seat is not ordered until after it reaches the clinic, it must wait until the seat arrives for it to be fixed.

The current routine does not follow jidoka because instead of stopping production and waiting for the new seat to arrive and then fixing the seat before production restarts, TMM USA continues with production and fixes the seat problem after the rest of the car is finished. There is one other way in which the current routine has deviated from TPS and that is that no one has tried to figure out what the root cause of the problems are, instead they are just fixing the seat. Because of this TMM continues to increase the number of cars in off-line production and the amount of overtime work required to maintain production numbers.

Ø What is the real problem facing Doug Friesen?

The real problem facing Mr. Friesen is the fact that cars with seat problems are sitting in the overflow lot way too long, which means that the run ratio had dropped from 95% to 85%. Thus there appears to be a problem with the handling of cars through the off-line process. Mr. Friesen needs to determine whether the cause of increase in the number of cars sitting in the overflow lot is caused by the process used for defective and damaged seats, the overall off-line process, or the supplier’s ability to meet TMM USA needs.

In conclusion, the seat problem is an issue that should have and could have been solved sooner. It is an example of what can happen when a company makes exceptions in their processes. If TMM USA had followed the TPS process in dealing with the seat problem it would have been solved fairly quickly, although it would have been quite costly to do so. I believe a modified TPS system could be applied to the off-line process which would encourage employees to look for solutions to the cause of the problem rather than just fixing the problem. 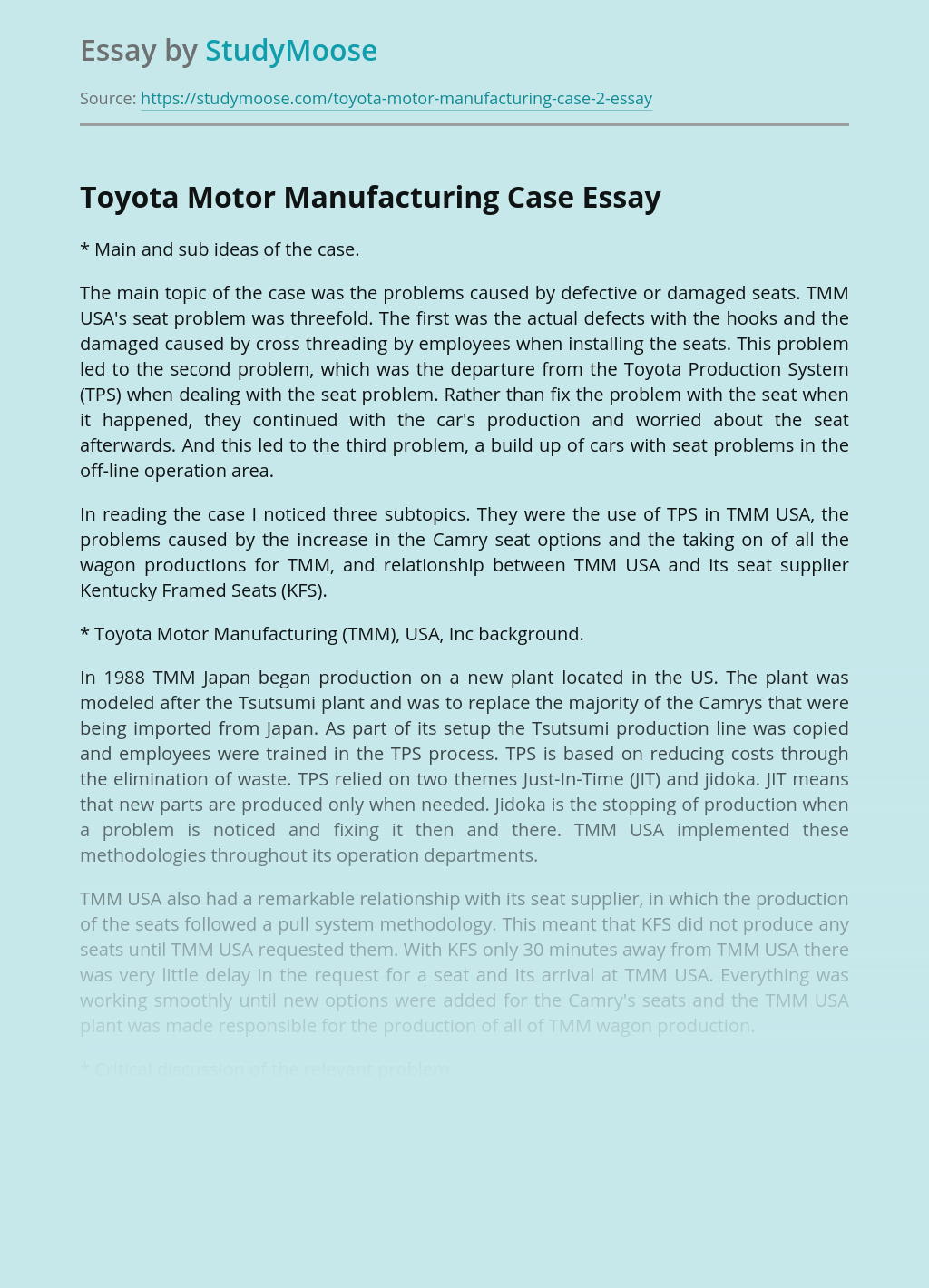 Turn in your highest-quality paper
Get a qualified writer to help you with
“ Toyota Motor Manufacturing Case: Main and Sub Ideas ”
Get high-quality paper
Helping students since 2015
Stay Safe, Stay Original