Toyota Motor Corporation, Japanese Toyota Jidosha KK, Japanese parent company of the Toyota Group became the largest automobile manufacturer in the world for the first time in 2008. Most of its nearly 600 subsidiary companies are involved in the production of automobiles, automobile parts, and commercial and industrial vehicles. Headquarters are in Toyota City, an industrial city ar east of Nagoya, Japan.

Its first production car, the Model AA sedan, was released in 1936. The division was incorporated in the following year as the Toyota Motor Company, Ltd., an automotive spin-off headed by Toyoda Kiichiro, Sakichi’s son. Toyota subsequently established several related companies, including Toyoda Machine Works, Ltd. (1941), and Toyota Auto Body, Ltd. (1945). However, faced with wrecked facilities and a chaotic economy in the aftermath of World War II, the company was forced to temporarily suspend its automotive production.

By the 1950s Toyota’s automobile production factories were back in operation, and began a careful study of American automobile manufacturers due to perceived U.S. technical and economic superiority. Toyota executives toured the production facilities of corporations, including the Ford Motor Company, to observe the latest automobile manufacturing technology and in turn implemented it in their own facilities. As a result, the company yielding a nearly immediate increase in efficiency. In 1957 Toyota Motor Sales, U.S.A., Inc., was established, and in the following year the company released the Toyopet sedan, its first model to be market in the United States.

But it was poorly received because of its high price and lack of horsepower. The Land Cruiser, a 4 utility vehicle released in 1958, was more successful. In 1965 the Toyopet, completely redesigned for American drivers, was re-released as theВ Toyota Corona, marking the company’s first major success in the United States.

During the 1960s and ’70s the company expanded at a rapid rate and began exporting large numbers of automobiles to foreign markets. Toyota acquired such companies as Hino Motors, Ltd. (1966), a manufacturer of buses and large trucks; Nippondenso Company, Ltd., a maker of electrical auto components; and Daihitsu Motor Company, Ltd. (1967). For several decades Toyota was Japan’s largest automobile manufacturer. The company continued to thrive in the American market as well, gaining a reputation for its low-cost, fuel-efficient, and reliable vehicles such as theВ Corolla, which was released in the United States in 1968.

The company experienced significant growth well into the 21st century, withВ innovationsВ such as its luxury brand,В Lexus (1989), and the first mass-produced hybrid-powered vehicle in the world, theВ PriusВ (1997). In 1999 Toyota was listed on both theВ London Stock Exchange and the New York Stock Exchange. The company continued to expand to new markets specifically targeting younger buyers with the launch of itsВ Scion brand (2003) and unveiling the world’s first luxury hybrid vehicle, the Lexus RX 400h (2005). However, the company subsequently faced significant financial challenges: plummeting sales stemming from the global financial crisis of 2008 as well as an international safety recall of more than eight million vehicles in 2010, which temporarily halted the production and sales of several of its top models. Beginning in 2014, millions of vehicles manufactured by Toyota and several other car companies were recalled by regulators in the United States because of potentially malfunctioning airbags produced by the Japanese automotive-parts supplier Takata. The recall was ‘the largest and most complex safety recall in U.S. history,’ according to the National Highway Traffic Safety Administration.

Today Toyota has assembly plants and distributors in many countries. In addition to automotive products, its subsidiaries manufacture rubber and cork materials, steel, synthetic resins, automatic looms, and cotton and woolen goods. Others deal in real estate, prefabricated housing units, and the import and export of raw materials.’ 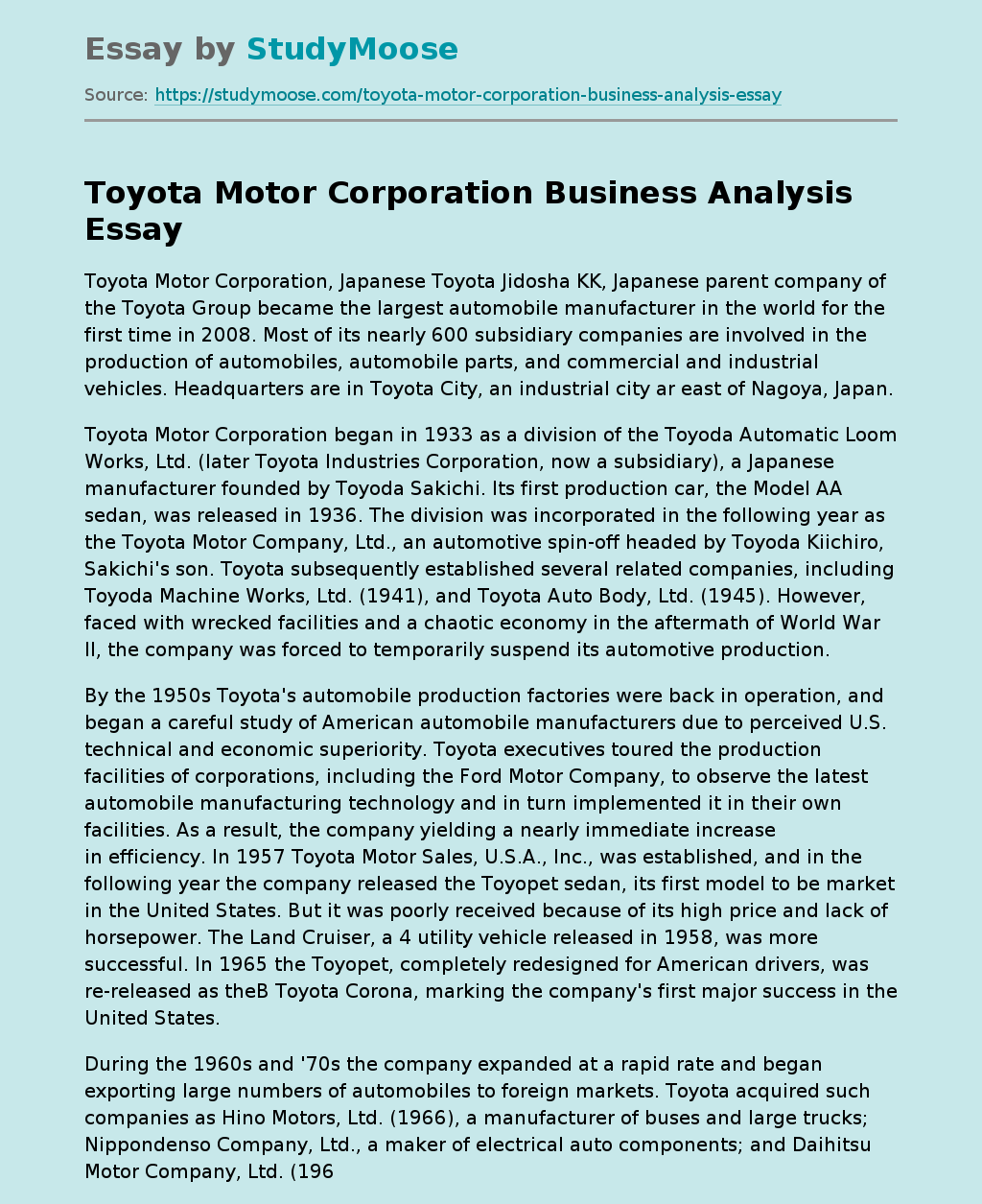