Balanced Scorecard (BSC) is a strategic performance tool, which is used by managers to monitor consequences and keep track of the execution of activities. According to Kaplan and Norton “balanced scorecard was designed as a strategic tool and used mainly by the executive of an organization, and might not be relate to the employees at operational levels” (2001). In addition, it gives people “a comprehensive measure of how the organization is progressing towards the achievement of its strategic goals” (Vedd, 2011). BSC is measured by both leading and lagging measurements to either look forward or backward to company’s performance.

The full assessment of BSC is done through a series of goals/objectives, mapping/measurements, as well as targets and initiatives.

The first measure is the finance, in which by justifying the revenue, the company can learn to improve its profits. The next layer down is related to customer satisfaction in which excellent service, company image, fair price, and high quality can result in good financial results.

By exploring the wants and needs of the customer, a company can focus on exactly what is needed to accomplish that goal. The third measure is internal process. This step is similar to value engineering, because a company must decide what values (e.g. good customer and product services) to be added with their product in order to excel in their sales. Last but not least, learning and growth this depicts if the company is willing to change in order to succeed. The final measurement shows that everything (that includes people, systems, and organization) processes through learning and growth.

Improvement will be made when everyone within the entire organization “make changes as” everyone “get feedback and learn what works” (Vedd, 2011).

A balanced scorecard is a tool used to accomplish many objectives in a company. It helps an organization clearly identify issues regards to its performance. It also communicates the key objectives and “can be experimental, whereby you test your strategies, refine, as well as make changes” (Vedd, 2011). Thus, it is an essential tool for business success.

Toyota Motor Corporation, abbreviated TMC, was established in 1937 by Kiichiro Toyota. As of June 2009, it is currently run by his grandson, Akio Toyoda. It is currently Japan’s largest vehicle manufacturer. It was also the world’s largest automobile manufacturer in 2010 by production. Toyota manufactures automobiles in 27 countries and regions throughout the world, and its vehicles are sold in more than 170 countries and regions under the Toyota, Lexus, Daihatsu and Hino brands (Toyota 2009). Toyota currently employs approximately 317,716 people worldwide, and over 4,500 in Australia (Toyota 2009). Evidence of loyalty to its employees has been shown through the decision of not cutting jobs during the global economic downturn. Ever since its conception, Toyota, like many other Japanese companies, has been a firm believer in delivering quality products to consumers at affordable prices. They believe that this can only be achieved by the upholding of loyalty and responsibility to the environment that they operate in.

The Toyota Way is a set of principles and behaviours that underlie the Toyota Motor Corporation’s managerial approach and production system. It is also the key to the success of Toyota. The 14 principles are organized in four broad categories: 1)Long-Term Philosophy- this means to base management decisions on long-term philosophy rather than on short-term gain even at the expense of short-term financial goals. The starting point is to generate value for the customer, society, and the economy. Evaluate every function in the company in terms of its ability to achieve this. 2) The Right Process Will Produce the Right Results- the recognition of the value of employees as part of the principle of measured production rate. Any employee in the Toyota Production System has the authority to stop production to signal a quality issue, emphasizing that quality takes precedence. These principles are designed to ensure that the work environment is maintained efficiently to avoid overproduction. 3) Add value to the Organization by Developing Your people- emphasizes the need to ensure that leaders thoroughly understand the work, live the philosophy and teach it to others. Lastly, 4)Continuously Solving Root Problems Drives Organizational Learning. The company embraces making decisions slowly by consensus, thoroughly considering all options and implementing decisions rapidly.

The key to Toyota’s success is based on Toyota’s firm belief on its management philosophy. “The Toyota Way” which was implemented in 2001 detailed the principles and conducted guiding principles that all Toyota workforces should hold. One of the first things Mr Akio Toyoda said after he was appointed as head of Toyota was that: “The company’s philosophy has always been contributing to the society.” As the world started the beginning of the recession, Toyota has been one of the few companies that, despite not posting a profit for an entire year, have managed to set themselves up for the future better than anyone else has. Toyota’s extensive research and development values are based on quality, durability, reliability, value or money, environmentally-safe, and convenience. One respite for Toyota during this crisis has been the massive boost in sales for their hybrid car, the Prius. As a result of the crisis, many potential buyers are looking to purchase fuel efficient vehicles in order to avoid spending a higher portion of their income on fuel, which has been a big plus for Toyota as the Prius is one of the most popular hybrids on the market. One last key success is the production system which is based on the concept of “Lean Manufacturing.”

Competitive advantage within the same industry

It is obvious that there is something special about Toyota. The Japanese automobile manufacturer currently has the fastest product development process in the world. New cars and trucks take merely a year or less to design, while competitors typically require two to three years. The foundation of Toyota’s success is the Toyota Production System (TPS) which was developed post World War II. While Ford and GM used mass production, big equipments to produce as many parts as possible and as cheaply as possible, Toyota kept their production small. Toyota also had to make a variety of vehicles on the same assembly line to satisfy customers. The TPS focuses on high quality and customer demand. This means nothing is manufactured until someone downstream asks for it. This so-called pull production prevents over-production and inventory build-up. One other competitive advantage lies in its knowledge sharing with its supply chain. Toyota established institutionalized routines for knowledge sharing across its first-tier supplier. In a study, Dyer and Kentaro Nobeoka of Kobe University said “organizational learning is perhaps the key factor in achieving sustainable competitive advantage. Leading Japanese automakers (especially Toyota) have developed bilateral and multi-lateral, knowledge -sharing routines with suppliers that result in superior inter-organizational or network learning” (Kintero, Dyer and Madhok, 2002).

As mentioned previously that “balanced scorecards are the best way of communicating strategy” (Vedd, 2011),the upper management in Toyota used the term “Hoshin Kanri”, which means the involvement of “implementation and execution of strategic objectives” (Witcher and Chau, 2007). This is where the upper management set its objectives to four perspectives of the scorecard and “oversees continuous actions in all functional areas of the firm on the QCDE objectives” (Toyota, 1999). The diagram below shows how it was functioning:

Senior management team played a major role of looking over the entire workflow using “cross-functional management.” Through that, the management was able to look into the four main perspectives of quality, cost, delivery, and education/people.

Toyota had successfully adapted “Hoshin Kanri” in managing and integrating both its production system and other dynamic capabilities, such as “Toyota’s integration of its supply chain” (Kurogane, 1993; Monden, 1998, Hines, 1998).

Below is the flow chart of how it was done:

From the Balanced Scorecard side, the senior management team. formulated three main keys: “vision, mission and values”, “balanced objectives and measures”, and “core capabilities and competences.” Following to the Hoshin Kanri side of the chart, the management team plans strategically for goals. From there, it was executed in the order of focus, align, integrate and review. The management would do daily, monthly, quarterly, and annually reviews depends on the term of goal where it was applicable.

The Toyota Production System was set up exactly as this flow chart. The management of Toyota implemented the Toyota Way as the company’s philosophy, and it monitored over its production line using it again as its guideline. Through periodic reviews, the management went over and over the same production line not only to make sure it was in line with its target or goal but also to find ways of improving the production system that it had. Over the long period of time, Toyota not only increased its production efficiency but also integrated its supply chain into its system. As an end result, this became Toyota’s successful factor and made it as a huge competitive advantage over its rivalries in the industry. Thus, Toyota became the giant in automobile making and surpassed GM as the number one company.

The company has successfully implemented the four perspectives of the balance scorecard into its strategic management plan. However, R&D is very important to this industry and can lead its way to further success in the future. Toyota has already been working through hibernate car with large investment of supply chain with another battery-making company. They are working into integrating this new segment into the Toyota Production System. Through period of time, it will improve its own through the flow chart shown above. Toyota will get better and be even more successful in the near future.

Toyota has recently surpassed GM to become the new giant in the automobile industry because of its success in making the Toyota Production System better and more efficient over the past decades. Toyota’s senior management should always look for ways to make the company better and add values to wherever is possible. One key point mentioned in the recommendation was the continuing in research and development in the hibernate car segment. With the oil price keeps on rising in this modern era, another new line the company should look into is the motorcycle industry, where its rivalry Honda, has success with. 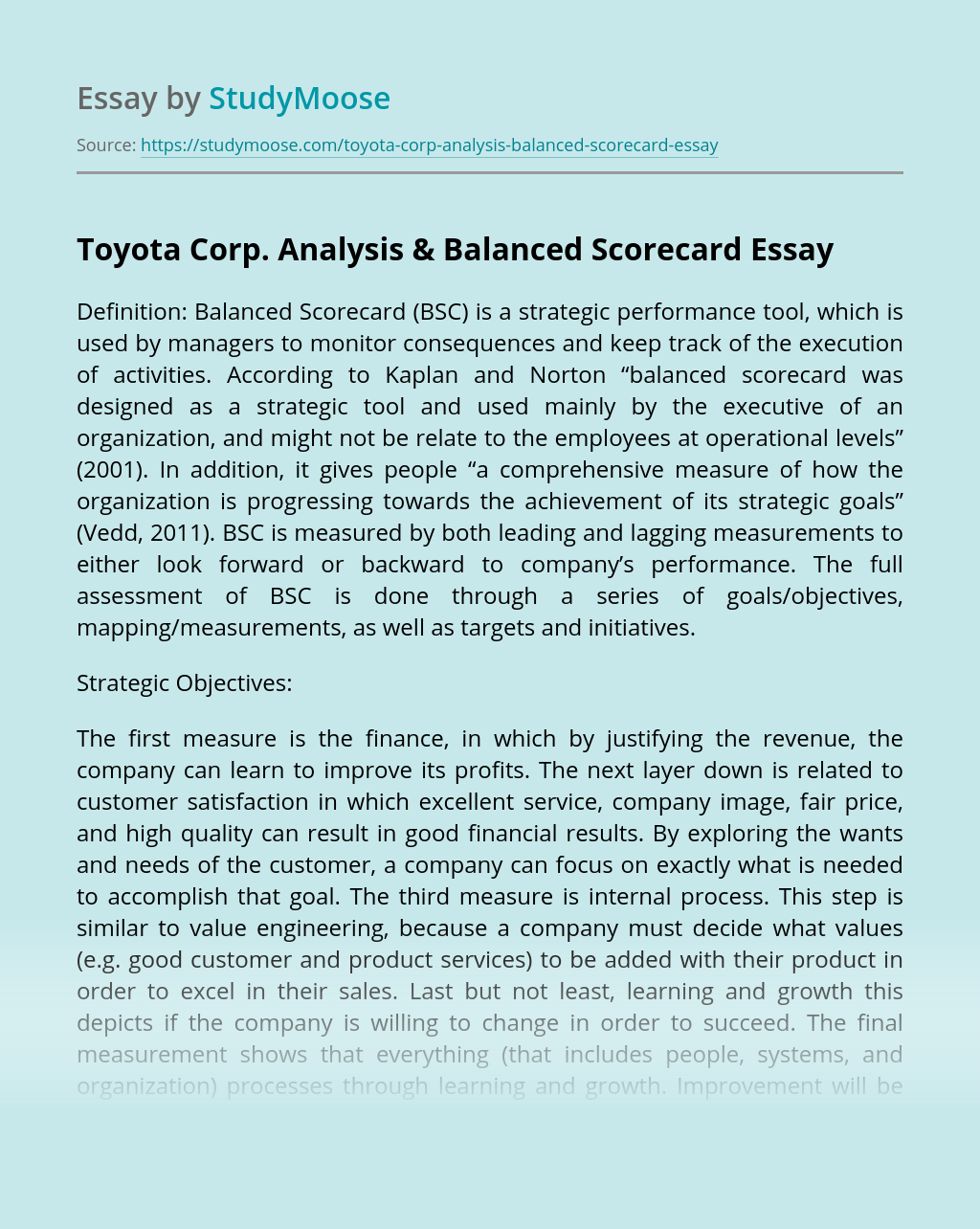