Toyota Motor Corporation is an automotive manufacture stationed in Toyota, Aichi, Japan. It was established in 1937 by Kiichiro Toyoda as a spin-off from Toyota Industries, his father’s company, to create automobiles. It has grown from just a dream to the world’s largest automobile manufacturer by 2012. Toyota made history when it became the first automobile manufacturer to produce 10 million vehicles in just one year. It has so far produced more than 200 million vehicles. The company produces vehicles under the brands of Lexus, Scion, Toyota, Hino, and Ranz.

Don't use plagiarized sources. Get your custom essay on
“ Toyota Motor Corporation ”
Get custom paper
NEW! smart matching with writer

The company has, however, faced challenges because it has failed to perform the corporate structure, cooperate with regulator better, and pay adequate attention to the complaints of their consumers.

I. Issues that the managers in the case are confronting

The managers of Toyota are currently facing various issues. By 2012 they had to recall more than nine million cars since there were strong claims that they had defects. Recalling this huge number of cars would results in huge losses.

First, there would be the cost of repairing these vehicles so that they can be roadworthy. Then there is the amount of time spent focusing on the repair or damage control due to the defective vehicles that could be used in other productive activities. Meanwhile, as they are busy recalling the vehicles, their competitors are focusing on production and this could mean increase in their sales. The management has to work double and strategize on how to manage this mishap so that it does not result in unnecessary huge company losses.

The managers’ methods of handling this crisis will significantly affect the turnover of the company.

This thus calls for a lot of professionalism and tact when handling the situation. Moreover, the company has been the cause of thirty-seven deaths since the year 2000. This kind of information when released to the public negatively affects how the public perceives the company. The case study reports that unintended acceleration was one of the major reasons why the vehicles were recalled. The managers of Toyota will have to find out the effect of this kind of information on the attitudes of the consumers and reverse them. The managers are also confronted with the need to engage in more effective advertisement to correct the dented image of the company. They also need to assess their production techniques to make sure that such defects will not occur again anytime in future.

I. Management concepts and theories

Toyota has a strong culture because they have core values and norms which are widely shared among over 30,000 staff members. The company has an integrationist perspective of culture. The integrated culture has led to the company’s huge success. It shares organization-wide agreement of managerially sanctioned values. The Michigan Model of human resource management can critically evaluate the issues raised in the case study when based on Theory X (Rudman, 1999). The theory points out that the workers avoid responsibility and they cannot be trusted. When a company calls back nine million vehicles, a number almost equal to the number of cars produced annually, then somebody is definitely underperforming. There must be a whole department full of employees of Toyota who have been mandated with the responsibility of ensuring that the vehicles produced are fit for the road. Their failure to ensure that over nine million vehicles do not go to the market fit makes them not easy to be trusted. The workers can also be classified as lazy since industrious workers would never let such a huge number of cars be released to the market while defective on their watch.

Additionally, the company needs little autonomy just like in the Michigan Model of human resource development (Rudman, 1999). Their independence should be limited, as they need tight control and close monitoring. These conditions would assert that the company does not get overwhelmed by its mission to be number one and forget about the importance of releasing safe cars into the market. Being ahead of their competition has proved to Toyota that that is a very dangerous place to be. The company must have developed a sense of pride that made them complacent and indifferent to reality. The complacency finally developed into arrogance since their workers saw no need of assessing their products to match current quality standards because after all, they were still number one. The company focused on containments and cost reduction instead of focusing on what was really necessary, quality of output. Production on such large scales would make it easy to reduce costs due to economies of scale (Herman, 2008).

However, it reaches a point where reduction of production cost would have a negative effect on the quality of output. At such circumstances, the workers should have ensured that quality was important. This way they would not have rushed into releasing the products into the market and end up selling to the world vehicles that had defects such as unintended acceleration. The model regards the employees simply as resources for achieving the goals of the organization (Nankervis, Compton, & Baird 2010). The company would find them irrelevant for inclusion into the process of strategizing and planning for the future of the company.

The management would therefore lack a good quorum when discussing best scrutiny methods that would not result in the sale of defective vehicles by the company. Regardless of this, common sense should be considered as the only route to the success of the company. The notion that assessment of products to ensure that they match the level of quality that has been advertised to the consumers should be common to all. They should not allow the sale of products that fall short of the currently expected level of quality as this eventually affects the company sales.

There are various decisions that could be tried by Toyota to resolve the issue. The company should give its regional managers more freedom to make independent decisions rather than have a rigid Japan-centered structure of organization (Clegg, Kornberger, & Pitsis 2011). Giving their regional managers more autonomy would speed up the process of decision making as it cuts down on the bureaucracy issues. It also increases creativity as the managers are allowed to come up with better managerial activities since they are free to do so. This freedom, when used responsibly by the managers, would help reduce the risk of complacency and ignorance to customer satisfaction as it has been noted by the current company practices. The effects of the mistakes of one regional manager can also be minimized since their decisions are not implemented on a global scale. Instead of having nine million recalled cars we might have just two hundred thousand since not all the regional managers will make the same mistake. The regional managers would also have role models of good management to emulate.

Since these role models would be their colleagues then they are very likely to be successful at fulfilling their mission of meeting the same targets as their mentors. Toyota’s decision to deny the claims that they were defective cars to their consumers did not work at all. You cannot have the loss of thirty seven lives in your conscience and still be able to look at the family and friends’ victims’ eyes and deny that you had nothing to do with when in fact you really did. This was a very bad decision and that is why it did not work and they had to apologize later on. They should have taken the claims more seriously and investigated the matter too very well before making public announcements of denial or acceptance of their mistakes. The fact that they initially denied the claims and then apologized later on then recalled over nine million cars means that they had not taken seriously the allegations against them.

Toyota should have employed the Japanese approach of organizational culture to remedy this situation (Adler, & Gundersen 2008). They should first create new knowledge. This would be done by assessing the situation and determining what is really going on and the cause of the problems. It is only by creating new knowledge that the problem can be understood and the solutions to these problems calculated. You cannot solve a problem if you know nothing about it. Research should be done to gauge what the public knows and compare it with the right information. Corrective advertising should be implemented in cases where there is a huge discrepancy. The company should also tap tacit and subjective insights. The tacit insights include those cultures, which are implied or understood without stating. Subjective insights are one’s understanding of specific effect and cause in a particular context influenced or based on tastes, personal feelings and opinions.

The company should also bank on the hunches and intuition of employees (Waddell, Jones & George 2011). The employees know and understand how the business works. This means that they know one or two ideas that are not obvious to everyone else. They should use the company when dealing with such a crisis. This way the best approaches known to man will be formulated as you cannot go wrong when you have over 30,000 ideas to choose from. The company should not depend exclusively on processing objective data. In summary, Toyota has experienced some setbacks as it has not been able to cooperate better with regulator, perform the corporate structure, and pay enough attention to consumers’ complaints.

The managers of Toyota are currently faced with issues such as recalling of more than nine million cars since there were strong claims that they had defects and the company has been the cause of thirty-seven deaths since the year 2000. The Michigan Model of human resource management can critically evaluate the issues raised in the case study when based on Theory X. Finally, Toyota should have employed the Japanese approach of organizational culture to remedy this situation. They should first create new knowledge. 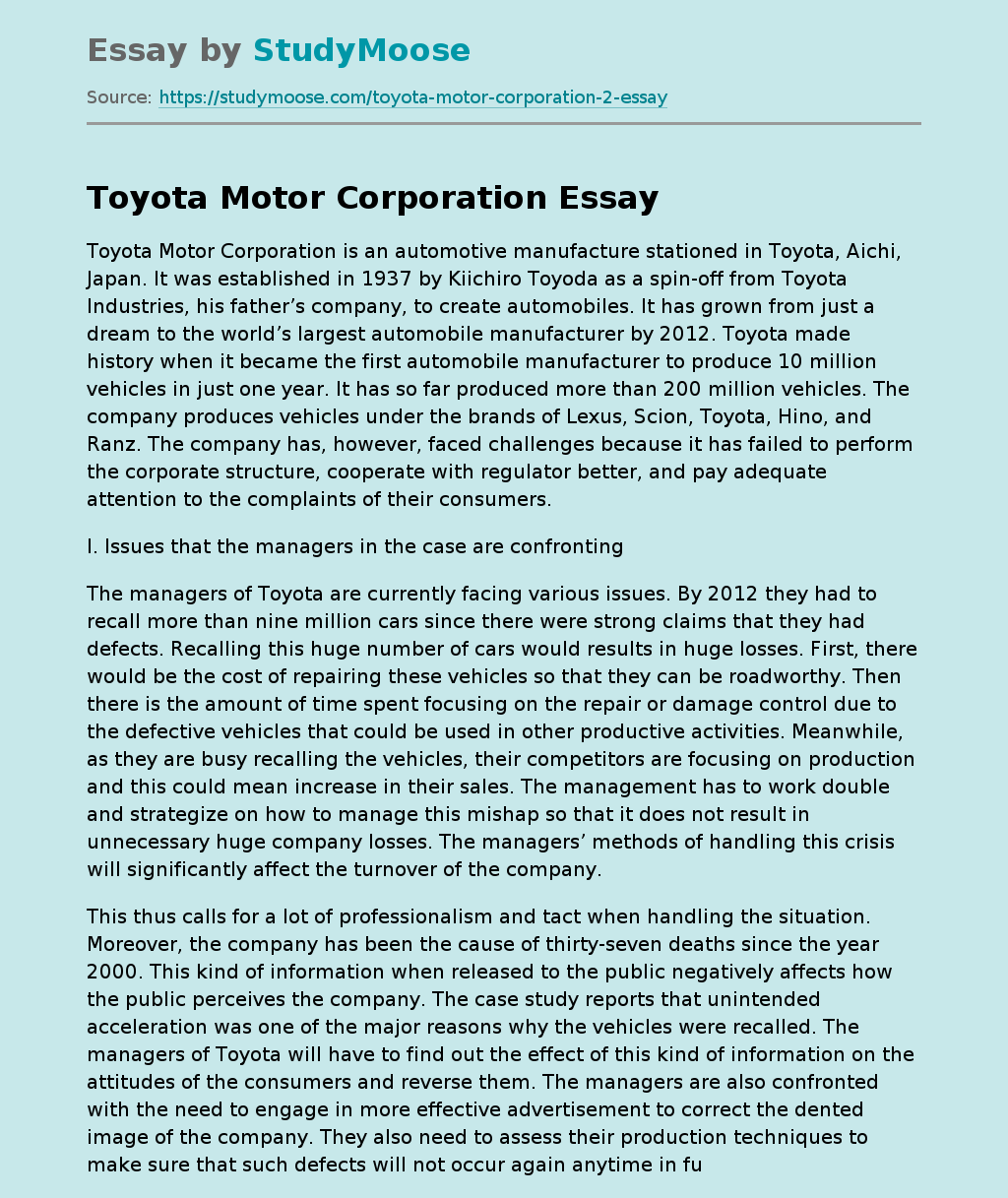