Hard Times opens with a look at a Utilitarian educational system.  The readers are introduced to a method of teaching that is centered only on facts and nothing else: no imagination, and “unnecessary” information (Hard Times…..2006). Schoolmaster Thomas Gradgrind fully supports the Utilitarian system, and has brought up his children Tom and Louisa ( and their siblings) in this way. Mr. Gradgrind’s longtime pal Josiah Bounderby – a factory owner – is also an enthusiast of Utilitarianism (Hard Times…..2006).

Louisa Gradgrind is a miserable and misled girl, while his brother Tom is an unwholesome and ambitious young man (Hard Times….

Don't use plagiarized sources. Get your custom essay on
“ Hard Times ”
Get custom paper
NEW! smart matching with writer

.2006). When a circus performer’s daughter, Sissy Jupe, enrolls at the Gradgrind School, she unsettles the people around her by her interpretation of life, which could be turned fanciful in contrast with the facts of Utilitarianism (Hard Times…..2006). Sissy’s father had outlasted his usefulness at the circus and ran away, deserting Sissy. Mr. Gradgrind felt sorry for Sissy and hired her on as a servant (Hard Times….

One day, Messrs. Gradgrind and Bounderby informed Sissy that she had to decide between living a better life through obtaining education and leaving all her circus friends behind, or go with the circus (Hard Times…..2006). Sissy chooses the former, because she knew that this is what her father wanted for her, and why he abandoned her. In the first chapter, we are also introduced to the people at the mill, who is represented by Stephen Blackpool – who desired a divorce from his alcoholic wife (Hard Times….

Mr. Blackpool and Mrs. Pegler immediately become suspects. When Mr. Gradgrind and Tom find that Mr. Blackpool has fallen into a mineshaft, the latter divulges that it was Tom who made him wait outside the bank (Hard Times…..2006). When Mrs. Pegler is found, she revealed that Mr. Bounderby is her son, and that all his stories of self-made success were a sham. Mr. Bounderby is humiliated (Hard Times…..2006).

Mrs. Sparsit, a nosy woman working in a bank who was snooping on Mr. Harthouse and Louisa decides to tell everything to Mr. Bounderby, who decided to give Louisa until 12 o’clock the next dawn to spurn Mr. Harthouse once and for all, or the marriage is forfeited (Hard Times…..2006). At the same time, Mr. Bounderby confesses to Mrs. Sparsit that she was aware of everything about Louisa and Mr. Harthouse, and of Louisa’s preserved honor, and how she went home to her father’s house in order to resist temptation. Mrs. Sparsit comes out in a bad light.

Louisa and her father are both convinced that Tom was involved in the bank theft, and that he framed up Mr. Blackpool. Tom admits it, Sissy suggests that he hides with the circus, and his father finds a way to send him away from shame on board a ship. Mr. Gradgrind is outraged by how Tom turned out to be, and felt the weight of Utilitarianism collapse on him. Mr. Gradgrind gives up his system, and accepted the “circus philosophy”because of all the troubles that Utilitarianism has brought on their lives.

The difference between fact and fancy is highlighted in the early pages of the novel. The Gradgrind system embraced a life full of facts and science, and scorned the concept of an imaginative life. Because of this, the Gradgrind system choked the souls of their students little by little. It took a Sissy and her circus troupe to teach them that, in contrast, life cannot be devoted exclusively to labor, and that people have to be happy.

Fidelity touches on the conflicts in personal interests, honesty and faithfulness that happens all through out “Hard Times.” Messrs. Bounderby and Harthouse were consistently dishonest, while Louisa and Sissy were steadfastly truthful. In Louisa’s story, her fidelity is highlighted when she refused Mr. Harthouse’s advances even though she has attracted to him, in spite of her displeasure with her husband. Sissy’s fidelity is highlighted by her strong conviction that the day will come when her father will come back for her.

The theme of escape underscores the vast difference between the lives of the rich and the poor. In Mr. Blackpool, we see a man yearning to escape from his unhappy marriage but cannot even escape his dreams for serenity. Tom indulges in vices as escapes from his boring life. Louisa desires to escape from her father’s rigid system. Finally, Mr. Harthouse seeks escapes in adventures, easily escaping each time when his adventures lose their luster.

Mr. Gradgrind represent the English ruling class during the Industrial Revolution. Mr. Bounderby symbolizes the Darwinist idea that anyone can achieve success through hard work. This is very important because we find out later in the novel that he is a fraud. Te description of Coketown represents what the Industrial Revolution does to people – working but not living a meaningful life. 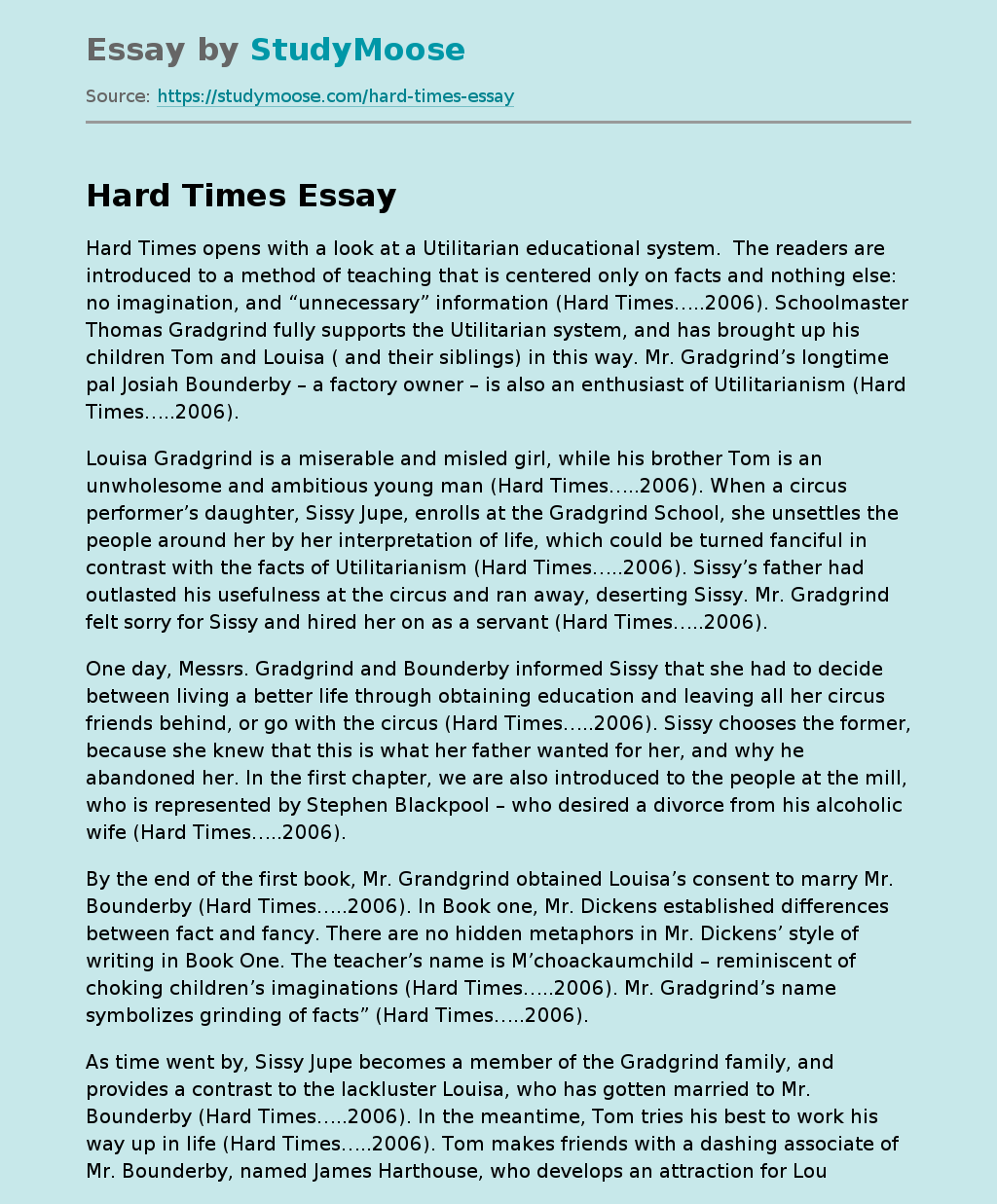